Hello my lovelies and welcome to yet another PAIZO PRODUCT REVIEW! Today we take on the Starfinder Tech Revolution—the second gear-focused supplement to grace our tables in recent times. What Guns & Gears hoped to do to Pathfinder 2E, Tech Revolution hopes to do to Starfinder: namely, a huge technological kick in the pants! Without further ado, let’s crack into it. 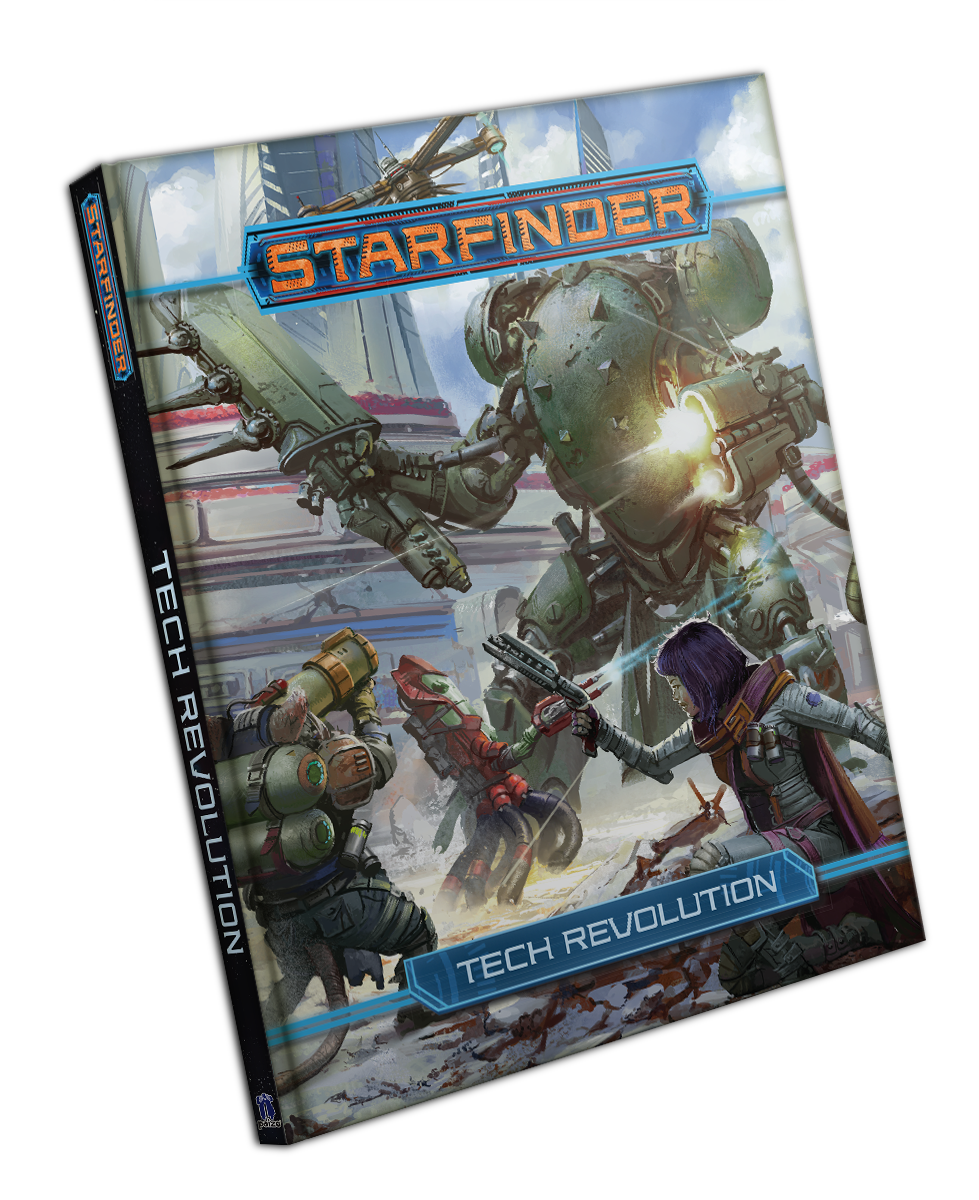 We start off Tech Revolution with the section most likely to be of interest to all you veteran Stafinders out there—new class options! Specifically, the first part of this chapter is dedicated to the new base class: the NANOCYTE. The Nanocyte is a being infused with an ever-growing colony of nanomachines that bolster their physical form and attacks, and give them strong options for control over the battlefield as well as some utility and versatility. Whoever was in charge of the Nanocyte’s design definitely started with the idea of melting their enemies to goo using swarms of nanobots, because there’s a chain of class options to support that tactic that is strong, obvious, and HORRIFYING. Well done!

The rest of the Class chapter is dedicated to providing new alternate class features for the other base classes so they can make full use of the new toys presented in Tech Revolution, as one might expect. Of particular note are the Mechanic and Operative class, which show a lot of love for the upcoming sections on vehicles and vehicle combat or performance. Now the motorhead in your life has to choose between steam powered robots in Pathfinder or going full Redline in Starfinder! Of course, to my eye, the Soldier class gets the best class options: namely, ones that allow MORE DAKKA! 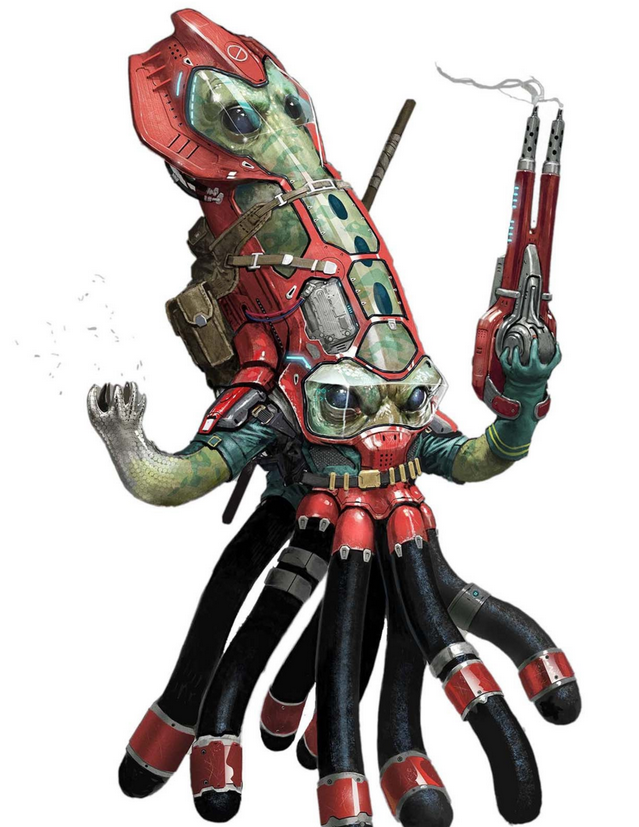 Tech Revolution leaves us absolutely spoiled for choice when it comes to neat nifty new gadgets to waste our hard-earned UPBs on. To start, the chapter kicks off with a delicious couple of pages describing a host of new retailers and manufacturers that GMs can use to flavor their new presents—or build whole new villains and campaigns from.

As for the new toys themselves? We’ll run through a few of my favorites in a vaguely alphabetical order. The carousing drone, for my money, is a must-buy, and if you have to ask why I don’t want you at my table. There is a quite adorable Programmer’s Plushie which, if Paizo isn’t actually making, is leaving money on the table.

All you would-be heist enthusiasts should keep an eye out for a flushbuster, which will undoubtedly be the perfect distraction for your targets—just don’t try to steal anything that has to smell nice afterwards. Paizo also continues their streak of accessibility and inclusivity success with the inclusion of hoverchairs, all of which come in a variety of fashions and combat competence. Augmentations give us the joy of Vengeful Ventricles, which allow one a spiteful bearded dragon-style retaliation upon taking bleed damage.

Finally, a section on Dynamic Hacking to expand on the standard rules for compromising computerized systems. I’m not … terribly opposed? to the idea, especially since it allows for less-proficient members of the party to contribute to what is otherwise time spent sitting on their hands while the nerd hogs the spotlight. I just tend to get a little gun-shy any time a game, especially one with as much going on as Starfinder, starts splitting one roll into five and one skill into three. If you want to make hacking a focus of your game, this is great—otherwise, I’d say leave it. 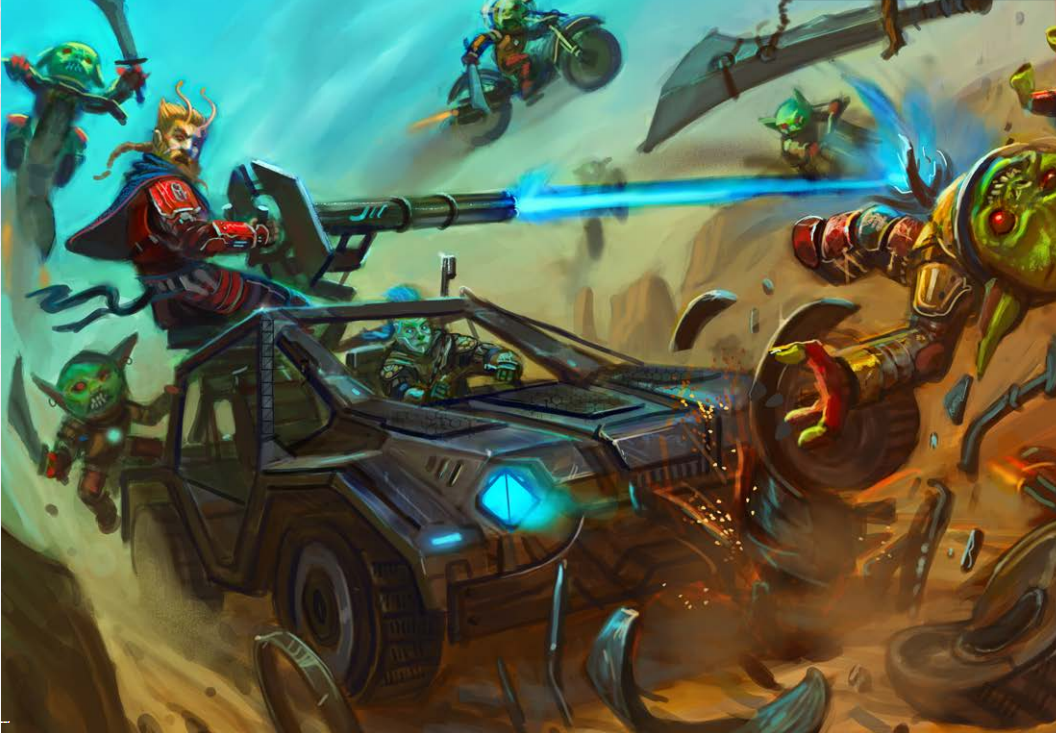 This section is less about “new vehicles” as it is about “making custom rides”—and really, who’s complaining? What’s the point of including class options that give you more customization options (and a ride right out of the gate) if not to over-modify the standard bugsmasher into something that can do supersonic speeds? Truth be told, my instinct is always to push for speed, but given Starfinder’s focus on combat you may be better served putting together a bruiser of an ATV.

The Vehicles section also spares a few pages for advice on running encounters with vehicles in mind—after all, they move faster, hit harder, and are made out of durable metal and not crude flesh like you and I. They’re going to need some adapting to! There isn’t a lot of hard, specific pieces of advice here, more general reminders of things the GM will likely need to adapt, but it’s handy nonetheless. 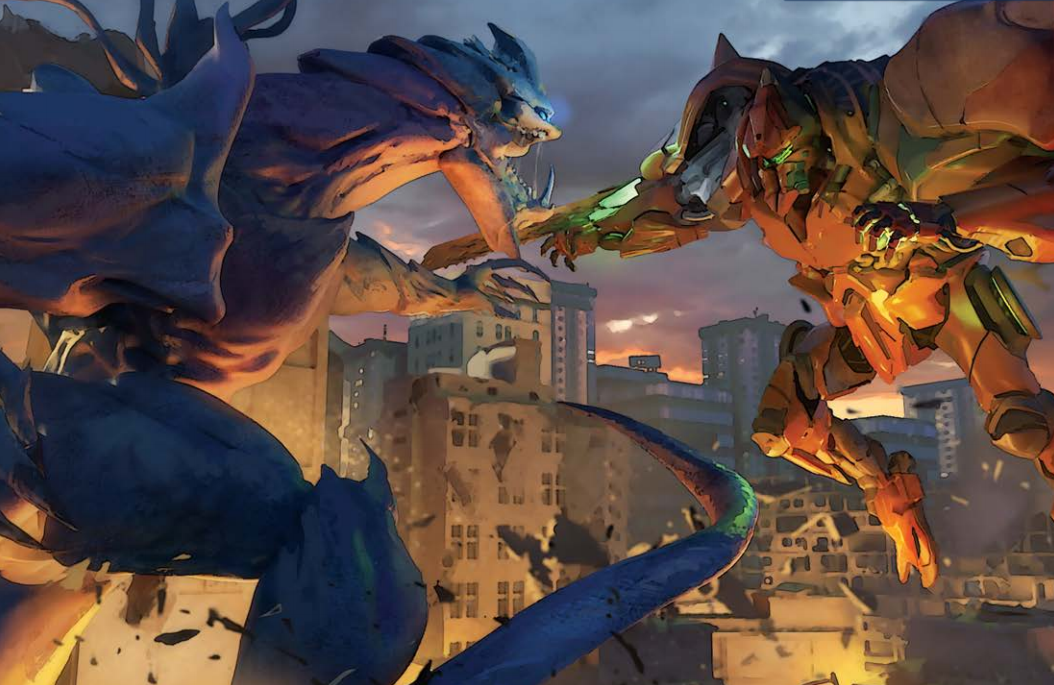 Full disclosure: I had the theme song to Pacific Rim stuck in my head the entire time I was reading this section.

I love mechs! Giant robots punching other giant robots or giant monsters in the face! That said, it’s not clear to me that these mechs are really … meant to operate at that scale. Thematically, it feels like these mechs should be largely unaffected by the personal-scale weapons normally available to Starfinder heroes, but the statistics provided for their Hit Points, Shield Points, and weapons indicate something very comparable to the infantry scale. Indeed, one of the first sections of the Mech rules explicitly says they are meant to fold seamlessly into the 5-foot grid. I would double-check the various Alien Archives to see if, say, the Daimalkan mechs actually punch in the weight class they need to in order to take on the colossi they’re supposed to. Other than that, however, IT’S TIME FOR A MECH FIIIIGHT!


A Galaxy Of Tech​

Once again the delightful writers at Paizo provide us with far more texture and context than one person could ever need regarding how all this new tech folds into and affects life in the Starfinder universe. There’s plenty to read up on pretty much every conceivable facet of living, so flip through till you find a section heading that catches your eye and dive in. I’m not sure how intentionally the illustrator for the Media section meant to capture the last two years for most of us, but ouch that hit close to home! Also, there’s a dedicated section for technobabble! Love me some technobabble.

There’s lots to love in Starfinder: Tech Revolution, and most of it goes BOOM. Really, that’s all I need to say to cherish my copy, and I know you will too. Now, if you’ll excuse me, I’m going to make a nanobot-fueled mech pilot who punches colossi into soup!
Click to expand...

When will it be translated to Spanish language by Devir?

I was quite excited for Starfinder when it first released. However, I'm finding, as with the latest iteration of Pathfinder, the pre-written adventures are not grabbing my attention and I do not have time/inclination to write my own.

Green Onceler said:
I was quite excited for Starfinder when it first released. However, I'm finding, as with the latest iteration of Pathfinder, the pre-written adventures are not grabbing my attention and I do not have time/inclination to write my own.

Yeah, maybe. Hadn't really considered that. Always thought it was more of a wargame property. Thanks for the suggestion. Will look in to it.

It is so hard to reconcile the cool and weird universe of Starfinder with its mechanics, but I do like the game even if that continues to make it a hard sell to my gaming groups.

Green Onceler said:
Yeah, maybe. Hadn't really considered that. Always thought it was more of a wargame property. Thanks for the suggestion. Will look in to it.
Click to expand...

I haven't got Wrath & Glory yet (difficult to find here in Canadaland) but Rogue Trader was quite good. WH40K universe is pretty grim, like old Warhammer was. And the lore content is astronomic. I have some Starfinder books as well but it's not the same level of PF1 in my opinion.

Green Onceler said:
I was quite excited for Starfinder when it first released. However, I'm finding, as with the latest iteration of Pathfinder, the pre-written adventures are not grabbing my attention and I do not have time/inclination to write my own.

Esper Genesis has an intelligent wasp species that makes zombie cannon fodder. And while it's more Star Wars than Expanse, there are things called netherants and mythos-like things that turn psykers into ... things.

You can play EG as heroic adventure but there's some dark places to go as well. So many games, so little time.

I need this one. I fricking love Starfinder. My current game started with a big Alien meets Zombies vibe and is now going into this weird space on a planet where there was no animal life but cultists of Nyarlothotep have discovered breaches to the abyss and are doing forbidden experiments that resulted in the mentioned zombies and they just encountered the creature that originally opened that breach, an insane elf that was pulled into the abyss with his familiar, a small cat like alien creature I call an Ekitna. The elf has used his power to take on the form of a dragon of immense power and can control the terrain and struck a deal with the cultists to leave him alone and he will protect their research centers from intruders by protecting their force field generators that guard the facility. There is an element of 40k going on, some GotG, and Alien. Next adventure is all space pirates all the time and will feature a creature I am going to call the Space Kraken as a pseudo god to one of the pirate captains called... The Kraken, who seems the good guy in a battle between Orc pirates, drow pirate/arms dealers, Veskarium military and The Kraken. Ties into the background of 3 of the five players and seeds are already planted from the first session with a now, sadly, deceased goblin that was supposed to be part of their crew as an NPC but was critted fighting my Gore ZOmbies, zombies who get stronger by eating the remains of the other zombies or their own vomit and created through science rather than being real undead like on Eox. Think Re-Animator.

I am not interested in Mechs, so half of the book is useless to me. A Galaxy of Tech on the other hand is very interesting, albeit a bit short. And as far as I understand future products will include similar lore chapters.
My only problem with that is how little effort Paizo initially spend in creating the setting and there is a huge gulf between the setting as described and how things actually work in the game with restrictions on buying stuff and exorbitant prices on one hand and how most people are supposed to have something requiring a higher level and a price of several thousands of credits. And especially the disconnect between the existence of de facto replicators as you can create everything everywhere by just using UPB, a amorphous form of matter and the setting not taking that into account at all with people still working factory jobs, etc.
Or how in the adventure paths for Starfinder there is no police anywhere so it is up to the PCs to have shootouts in the streets with no repercussions for them and no one batting an eye when they install nuclear missiles onto their space ship for free.