Not only did Chris Perkins pretty much confirmed that the product codenamed "Dust" is the one which Pendleton Ward was involved with (see below), but WotC's Greg Tito also confirms that the weekend-long live stream will feature the main announcement right at the beginning with a preview of a piece of art featuring.... dinosaurs! The video below features that art, as well as Tito talking about the various celebrities who will be attending (and starring in) the event. 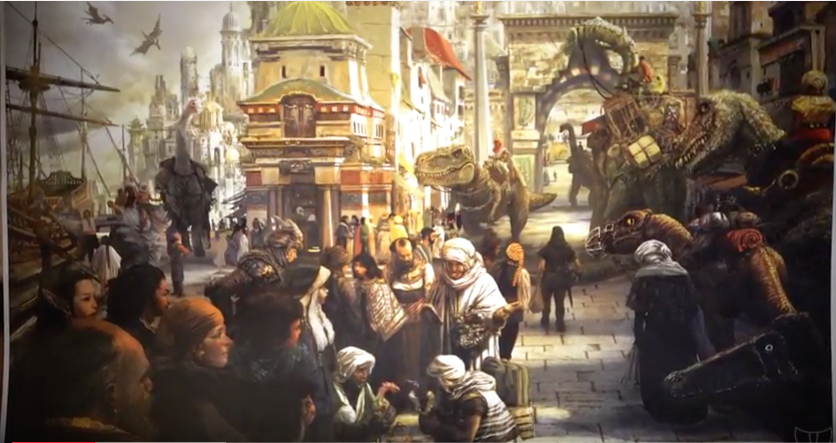 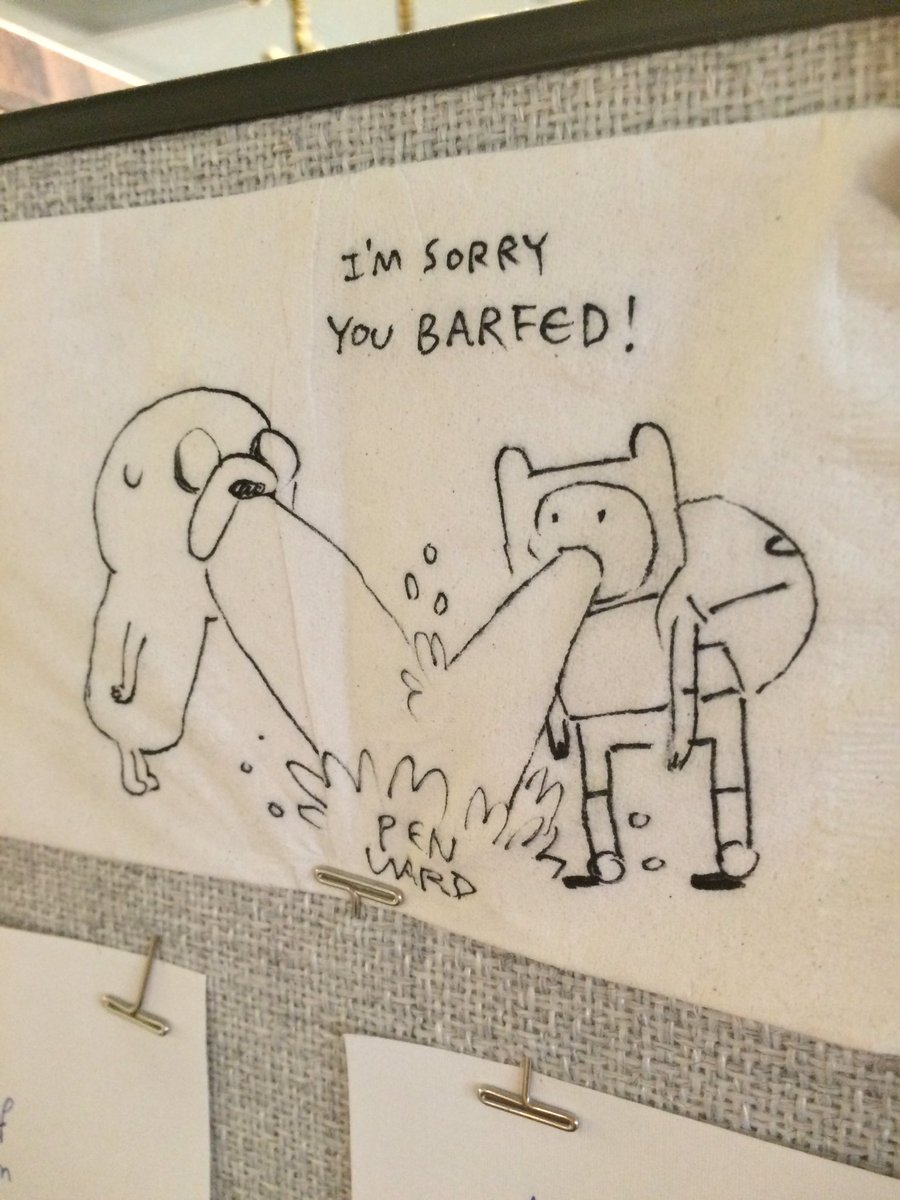 "Something to look forward to. #wotcstaff #dust" - Chris Perkins
SaveSave​
Click to expand...

TerraDave said:
Let me put it like this, in long-standing FR lore, is there a city with merchants that ride on dinosaurs or use them as beasts of burden?
Click to expand...

That's more or less what Mezro was before it was destroyed. Port Nyanzaru might be the same.

That is what I think it will be. "Midway" being code for Sigil and the idea of transitioning into other settings.

TerraDave said:
But thats the thing. The Underdark did not originate in FR and is not FR specific. Lost jungly places in D&D with strange ruins and dinosaurs also predate FR and are found in other settings besides FR.

Which is fine. They can say Chult, or whatever.

Let me put it like this, in long-standing FR lore, is there a city with merchants that ride on dinosaurs or use them as beasts of burden?


"Small dinosaurs are not uncommon in the city, as they are often used for beasts of burden and as mounts by some of Mezro's more adventurous folk." - The Jungles of Chult p. 12, (c) 1993, TSR.

Granted, Mezro was, as mentioned up thread, apparently destroyed during the Spellplague, but some of its population survived, as "its displaced people" are mentioned on page 10 of the Sword Coast Adventurer's Guide ("Ruined Mezro stands across the sea from Calimshan, waiting for explorers and its displaced people to cleanse the city of its undead inhabitants and uncover the treasures that lie hidden there"). Presumably these displaced inhabitants would have taken their dino-riding ways with them to where they settled (the nearby port of Port Nyanzaru has logically been mentioned in this thread). And beyond that, those of the Tabaxi ethnic group who didn't live in Mezro presumably used dinosaurs similarly (why would such a useful skill be confined to the city folk?) and would continue to do so to the present day...

Prakriti said:
This map. It was linked in this post.

You will most likely need to copy-and-paste the link into a new browser tab, since the website doesn't allow hot-linking. In any case, it's a map of Chult (from 4th Edition, I believe), which includes the Ruins of Mezro on it.

If you go to the folder (http://dndadventurersleague.org/wp-content/uploads/2017/05), you will see other media for the month of May, mostly related to Tales from the Yawning Portal.
Click to expand...


Those maps are from 1479, and it's now 1492ish. The SCAG specifically references the Chultan peninsula (and it's just visible in the map), so it's back to being part of Faerun proper, not an island. It also mentions Mezro is in ruins, but Port Nyanzaru makes more sense anyway. This might be the first AP that I consider running as is.

TerraDave said:
Let me put it like this, in long-standing FR lore, is there a city with merchants that ride on dinosaurs or use them as beasts of burden?
Click to expand...

Elderbrain said:
Eberron is the only other option I can think of - but there dinos are associated with Halflings, and those look like humans in that pic.
Click to expand...


Also, the dinosaurs on the Talenta plains in Eberron are mostly of the smaller variety - some might get to Large size, but generally lower than that. If you want bigger dinos, you'll mostly find them in Argonessen or Xen'drik.

briggart said:
According to the FR wiki: "The Spellplague destroyed the city of Mezro, leaving it an undead- and monster-infested site.". Also, the Chult map uploaded to the AL website shows "Ruins of Mezro", so I don't think the teaser is showing Mezro.
Click to expand...


So Acererak has been ousted from White Plume Mountain and has taken up residence in ruined Mezro, raising an undead army.

Seriously, they couldn't even come up with a new Map, they just recycled the 4e Map, which thanks to the Sundering is out of date.
Last edited by a moderator: May 26, 2017

In for this in a big way

dropbear8mybaby said:
So Acererak has been ousted from White Plume Mountain and has taken up residence in ruined Mezro, raising an undead army.
Click to expand...

When was Acererak ever in White Plume Mountain?


gyor said:
Seriously, they couldn't even come up with a new Mao, they just recycled the 4e Map, which thanks to the Sundering is out of date.
Click to expand...

I wouldn't worry about it. The adventure itself is bound to have updated maps in it.

Here's hoping one day Eberron is opened up like Ravenloft (or that they do it justice with a setting book).

edit: Also, I agree with the speculation it's an adventure set in Chult.

dropbear8mybaby said:
So Acererak has been ousted from White Plume Mountain and has taken up residence in ruined Mezro, raising an undead army.


You are thinking of Keraptis, he is the wizard (or lich maybe) that constructed WPM.

Jocanuck said:
You are thinking of Keraptis, he is the wizard (or lich maybe) that constructed WPM.
Click to expand...


Ah, yeah, confused it with ToH.

pukunui said:
When was Acererak ever in White Plume Mountain?

I wouldn't worry about it. The adventure itself is bound to have updated maps in it.
Click to expand...


Honesty I'm more concerned with others as I won't buy the Adventure Path until we get a FRCG.

This book sounds more interesting than any of the others so far, largely because a savage wilderness can be transported much more easily to someplace more distinct and interesting than the Forgotten Realms. If they could mesh the basics of THAT idea with the discrete shorter adventure format from TftYP, they'd get my cash no (other) questions asked.

I wonder if it's just the main part of Chult that will be explored or with Samarach and Thindol will also be explored.
Last edited by a moderator: May 29, 2017

I could sugest another option.

In the Oficial DnD podcast there is a section called lore you should know.
And in the last 2 episodes the lore was about Baldurs gate and Amn.
But I noticed that in both cases they make a point of talking about the trade these places had with Maztica and if this trade will be re established now Maztica has returned from Abir.

So could this city with dinosaurs be something on the continent where Maztica is ?

So Nathan Stewart tweeted the following as a "preview" for the SoA:


(quotes around preview were his not mine).

I personally have no idea whether that tells us something interesting. But maybe someone else does.

Where do Aarakocra come from? Hmmm, I wonder?