More details of Strixhaven Curriculum of Chaos have emerged on D&D Beyond. Owlin are in, and there is a built-in 1-10 campaign composed of four separate adventures, each spanning a single school year, and taking the PCs from first-year students through to graduation. 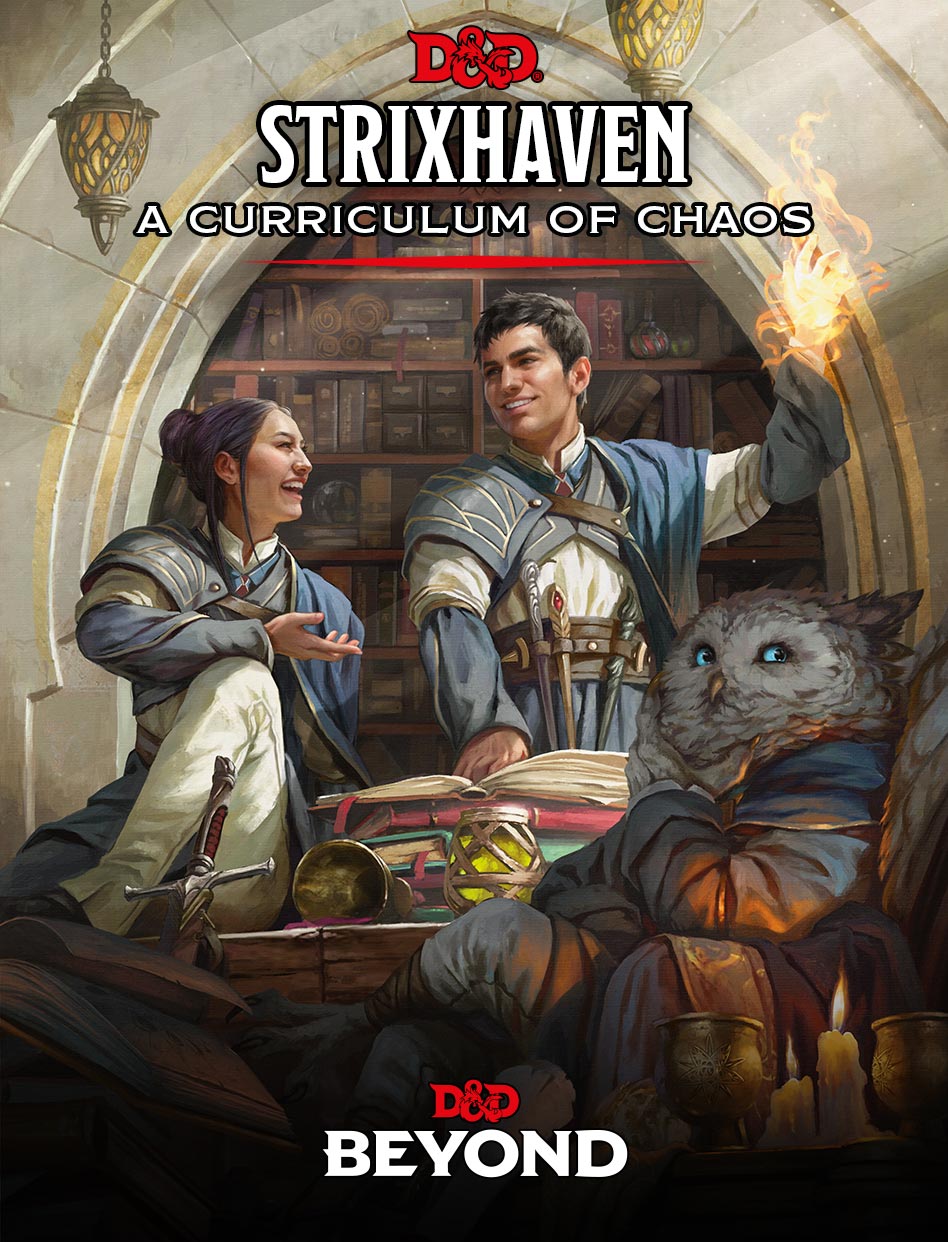 THE SCHOOL OF MAGIC IS IN SESSION

The greatest minds in the multiverse meet at Strixhaven University. Professors convey fantastic secrets to eager students, and life on campus is frenetic. But danger lurks even here. Campus hijinks mix with mishaps and sinister plots, and it’s up to you to save the day.

Strixhaven™: A Curriculum of Chaos introduces the fantastical setting of Strixhaven University, drawn from the multiverse of MAGIC: THE GATHERING, and provides rules for creating characters who are students in one of its five colleges. Characters can explore the setting over the course of four adventures, which can be played together or on their own. Each adventure describes an academic year filled with scholarly pursuits, campus shenanigans, exciting friendships, hidden dangers, and perhaps even romance. This book includes a poster map that shows Strixhaven’s campuses on one side and location maps on the other.

This purchase unlocks the contents of this adventure for use with D&D Beyond, including the book in digital format in the game compendium and access options from the book in the searchable listings, encounter builder, character builder, and digital character sheet.

Strixhaven: A Curriculum of Chaos

Explore Strixhaven in the latest Magic: The Gathering campaign setting for Dungeons & Dragons

Henadic Theologian said:
It many ways it doesn't work and quality of the products suffers for it.
Click to expand...

It works in the most important way (to WotC) - it sells well. I also disagree that the quality suffers.

Whizbang Dustyboots said:
I think we both need to come to terms with the fact that it'll be Ellywick Tumblestrum's book.
Click to expand...

Forty creatures and NPCs feels like a lot. How does that compare to the previous MTG books?

Whizbang Dustyboots said:
Forty creatures and NPCs feels like a lot. How does that compare to the previous MTG books?
Click to expand...

Pretty small, relatively speaking: Ravnica has 75 new star blocks in addition to extensive advice on how to reskin MM entries as Ravnica critters (use Wollu Mamoth sets for Giant Warboars for the Gruul Clans, for example). Theros has 48 and a major Template, including the original 3 Mythic Monsters.

Whizbang Dustyboots said:
Forty creatures and NPCs feels like a lot. How does that compare to the previous MTG books?
Click to expand...

To add to this, Ebwrron: Rising from the Last War has about 38 Monsters & NPCs, Ravenloft has 33, and Wildemount has 17. So, Stri haven is about middle of the road for 5E Setting books on the Bestiary front.

Polygon says there are 18 NPCs, so Strixhaven actually has 22 monsters.

Whizbang Dustyboots said:
Polygon says there are 18 NPCs, so Strixhaven actually has 22 monsters.
Click to expand...

I rather expect a more cerebral and social campaign style is what's being promoted here, less combat intensive (still more Monsters than Wildemoint, though).

D&D 5E Strixhaven: Curriculum of Chaos - I have no clue what this is about
2

WotC Hydro74 Cover for Strixhaven: A Curriculum of Chaos