From the City-State of the Invincible Overlord to the ancient city of Viridistan the wilderness is thick with dungeons and ruins. Contained in this book are the background and rules used in a campaign thirty years in the making. You will find over two dozen classes ranging from Soldiers to Mountebanks and races of Reptile Men to Half-Viridians. New races, magic variants, creatures, and magic items can be found within these pages. Also included is a complete overview of the Majestic Wilderlands. Begin your journey into the Majestic Wilderlands and become the next person to carve their mark in the hall of destiny.

A 140 page rules supplement compatible with the Swords & Wizardry rules and a guide to the Majestic Wilderlands. 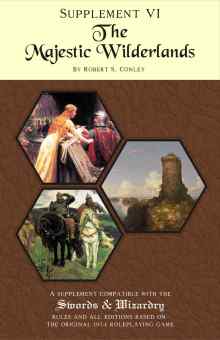 Printed copies of the rules are available through lulu.com

For further information please contact Robert Conley at robertsconley@batintheattic.com or read the FAQ at Bat in the Attic Games.

I have posted a review of this product on my blog, In Like Flynn:
In Like Flynn: Review: Supplement VI, The Majestic Wilderlands...