It's like finishing up a great book series - bittersweet. I don't know if any of us were ready to say goodbye to the Zeitgeist campaign, but after finishing Adventure 13 last night, we brought it to a close. I'm planning a sequel campaign in the future, but I want to let the sheer greatness of this kind of recede for a while - I don't feel confident about going head to head with it, so the next game we play will be kinda small scale.

NOTE: If you are on Tapatalk, sblock doesn't work. so...

[sblock]
After a while of figuring out the rules of the final ritual, and after taking out the Revolution zeppelin, the party made everything happen basically at once. The first key tonight was convincing Borne to back out of the conflict by revealing how Nicodemus arranged the death of Kasvarina's daughter. Rina was already completely on the party's side from Adventure 8, but this was the final straw. Most of the rest of the party finished up putting their desired planes into the various columns, and the Redemption and Completion endings hit simultaneously. William Miller (the one from Ascetia) possessed Nicodemus right before the party finished closing the seal. They let Kasvarina deal the finishing blow, and there was sunrise.

We've immortalized the setup, and it's hanging up for the immediate future... (please ignore my unfinished basement walls!) [MENTION=63]RangerWickett[/MENTION] - thanks for the .tiff; it was just what I needed to print this giant, gorgeous map. 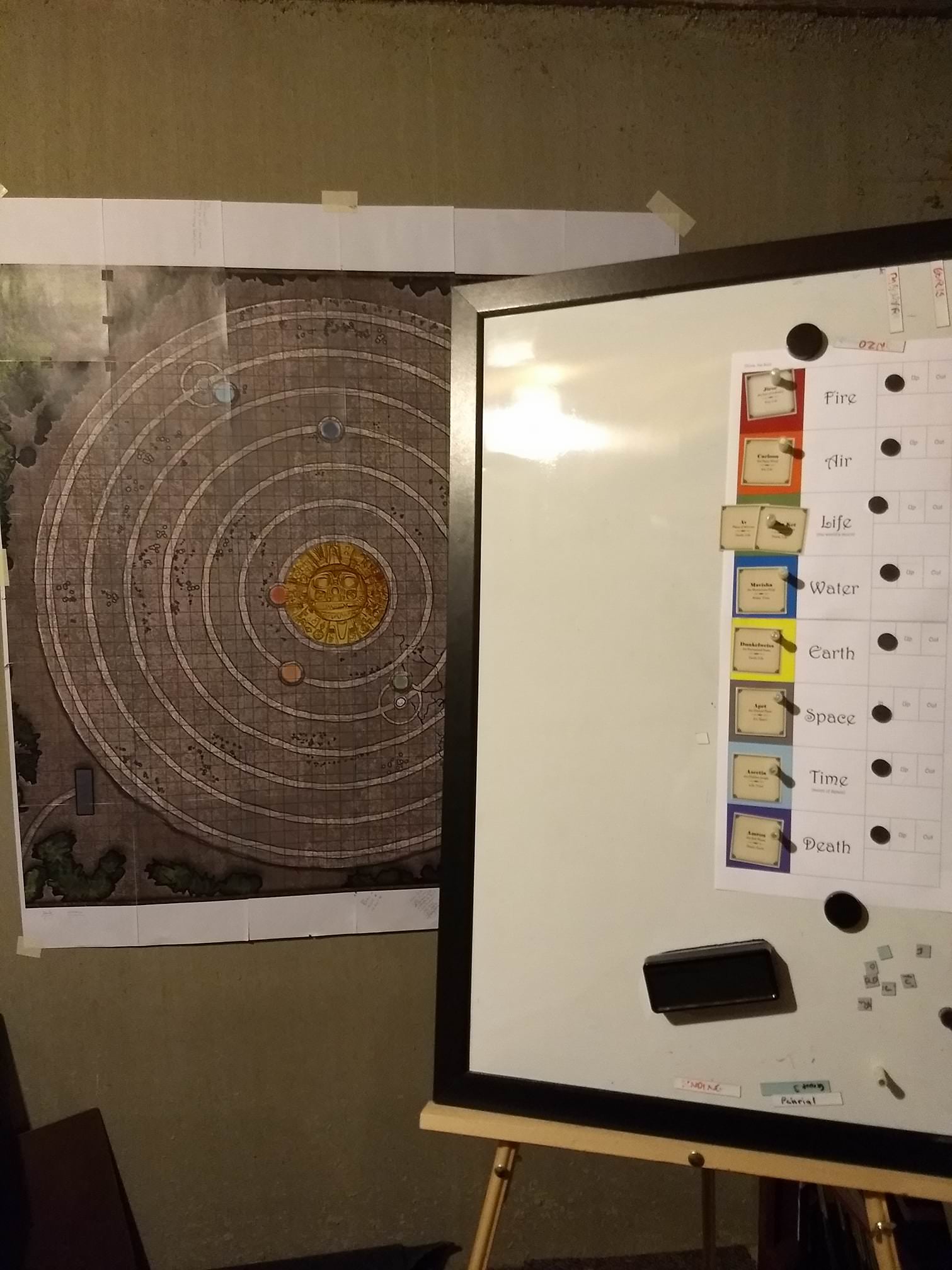 The planar configuration they selected was as follows. They cheated and gave the world a 2nd moon, so two planes occupy Life - Av and Iratha Ket.

They also managed to resurrect all of the Eladrin women who died in the Malice, so that was kind of cool too.

I am looking forward to making a new campaign set, say, 75 or so years in the future. It will be more industrialized than everything is currently; Iratha Ket will add some fun, and I'm thinking there'll be some massive criminal organization that controls all the booze - it's such a benefit, now, that enterprising people may want to lock it down.[/sblock]

Your unfinished basement walls are an opportunity...to immortalize your Zeitgeist campaign through wall hangings!

On mobile, so I'll post more later, but woot!

I'd be thrilled if you could ask your players if they have any favorite (and least favorite) parts of the campaign. Did you do the denouement?

I'd be thrilled if you could ask your players if they have any favorite (and least favorite) parts of the campaign. Did you do the denouement?

We did - at least the parts that made sense - although I had to rush it a teeny bit. I am kicking myself for not doing more with all the resurrected Eladrin women now, though I guess most woke up in Crysillyir or Elfaivar so that's probably not as big an oversight as I expected.

Morgan, the infiltration lady, Beshela, Wolfgang, and Harkover Lee were all dead, so I awkwardly filled in some blanks.

The whole Rock Rackus thing was entertaining, as expected. Viewing the Slaad was weird and kinda awkward, as was the shooting range. I skipped the eschatologist thing and the vekeshi thing; the latter especially would not have lent itself to easy wrap-up. Borne went well, and the party was more than happy for Pemberton to take it off their hands. And one of their Wishes was to resurrect King Aodhan, who was himself more than happy to remain abdicated and join up with another PC's new privateer fleet. (They made an appearance christening the new boat with the king.)

It was a good little lightning tour. I am glad it existed.

I'll get deeper feedback from them, or at least ask for it!

Awesome, man. Good job sticking it through to the end! I'm sure you and your gaming group have some great memories from an amazing campaign. Just curious, how long did it take from beginning to end?

kcannell said:
Awesome, man. Good job sticking it through to the end! I'm sure you and your gaming group have some great memories from an amazing campaign. Just curious, how long did it take from beginning to end?
Click to expand...

Something like 3-1/2 years, give or take, with mostly weekly sessions of 3-1/2 hours each.

Sent from my SM-T800 using Tapatalk

I'd be thrilled if you could ask your players if they have any favorite (and least favorite) parts of the campaign. Did you do the denouement?
Click to expand...

Okay! I got some feedback from my players.

Most prominent in the negatives? Everyone hated Naval Combat, honestly myself included. The system was overly complex, and not sufficiently enjoyable. It never felt anything other than tacked-on. We tried both the pared down versions and the full Admiral of the High Seas rules, and neither of them worked to our satisfaction. This drove a general lack of interest in anything involving improving ships, so we just used stock descriptions for the campaign.

Whenever possible, I replaced naval battles with various degrees of narration and/or skill challenges because naval combat just sucked all the air out of the room for us.

But here goes the rest -

Favorite parts:
• Factions. All the various factions were awesome. (Clergy, Demonocracy, RHC, Obscurati etc.)
• Having nemesis’ who had personalities and goals. It was hard not to side with them on occasion and feel for them. Not just some nameless evil.
• Geek references in the flavor text and literature
• Ashamashintu (sp?) – She was awesome!
• I loved the adventure where we infiltrated the Obscurati. Definitely one of my favorite.
• Taking a single character from level 1 to 30 in one cohesive campaign. I have been playing D&D for nearly 30 years and have never done that.
• DM’s ability to juggle a huge campaign and give each character their own voice.

What didn’t work:
• I felt Navel combat was a bit complex and it kind of pulled you out of the game
• I was never clear on why the Voice of Rot seemed to have greater power than the other Fey Titans.
• I enjoyed our sessions working for the RHC. As we got higher in level and took a leadership role things had more weight but I didn’t enjoy them as much...

Regrets:
• Not keeping a journal. The campaign was long and I feel I may have missed out on some awesome realizations or character reoccurrences due to memory issues. This wasn’t something that didn’t work, but something I would have enjoyed doing in hindsight.
• Switching characters for a few sessions. Wish I would have stuck with Dagnyr the whole time.
• Being a Gnoll. I wish I would have stuck with a human character to better fit with the campaign and Risur in general
• Not spending more time reading up on the world
• Not ever siding with the Obscurati. A lot would be spoiled now, but would love to play on the other side.
Click to expand...


The whole thing was a blast really. I think the Voice of Rot was probably my favorite character, but that's maybe because I built him up a bunch for myself. He was pretty one dimentional as hell, but his plot was devious and threw things for a loop to say the least. Really, it had a lot of interesting and memorable characters in it with their own ambitions and influence throughout the story. I liked a lot of the planeshaping that we could do as well, but I think my favorite was the slow build through the campaign. Starting out as just constables and building up to a grand conspiracy felt spaced out really well. It made it feel really cool going from lowish in the world into grand saviors. I think I didn't like how parts of it felt without any direction, particularly in this last act on the real world where hope was all but lost. That being said, maybe that helped to enhance the idea of hopelessness with the sense of "what the hell are we doing or going to do," so I dunno. It made it really difficult to pick a direction in those times I feel. Otherwise, I loved it.
Click to expand...


I was definitely not a fan of naval battle rules for 2 reasons:

1) In a larger group like ours too many people were sitting around doing nothing. Maybe it was just the way we ran them, but it seemed like the captain and the gunner were the only people that really mattered.
2) Even at higher levels we seemed pretty ineffective at naval battles - it was too difficult to do significant damage even when we had major advantages in ships and crew.

Most of my other not likes were pretty personal in nature - I'm a fighting guy and sometimes there was a bit too much talky stuff for me. The other thing was sometimes we didn't really have a clue what to do so I'm sure we missed a bunch of things and wasted a lot of time because no one quite knew what to do or where to go.

What did I like? I loved the story - incredibly deep and interconnected on so many levels. Great character and environment development, etc.
Click to expand...

May 26, 2021
Andrew Moreton
A
S
ZEITGEIST [Spoilers!] Questions from a first read