Here's a review of The Dark Crystal Adventure Game based on a read-through and some minimal solo play-testing to get a feel for the mechanics. There are no explicit spoilers in here, but some discussion of game mechanics or adventure structure might be considered a 'spoiler' to a player in the game.

It's somewhat detailed, so skip to the last spoiler block for the TL;DR.


The Dark Crystal Adventure Game is a beautiful game book with plenty of material to support a campaign, or just to mine for inspiration. The aesthetics of the book itself, of the game system, and of the adventure all nicely complement the whimsically grim setting. A players' map of the world of Thra is printed inside the dust jacket, and a paper bookmark shows the main rules for easy reference. A few parts of the included adventure feature special pages such as puzzle transparencies and upside-down printing: maybe a little "gimmicky", but these certainly add variety! Additional accents include a pocket inside the back cover, three ribbon bookmarks, and richly etched covers. The book itself is 290 pages and illustrated with color art drawn mainly from other Dark Crystal media and publications.

The first 45 pages include a bit of advice for gamers, and the rules for character generation and the game system. The setting itself only gets about four pages, but is fleshed out in the 200 pages devoted to the adventure. A handful of appendices rounds out the content, including a useful list of equipment, a bestiary, and a short gallery of photos from the Dark Crystal movie and series.

Some supplemental material is available for download on the River Horse website, including the character sheets, maps, and the bestiary. 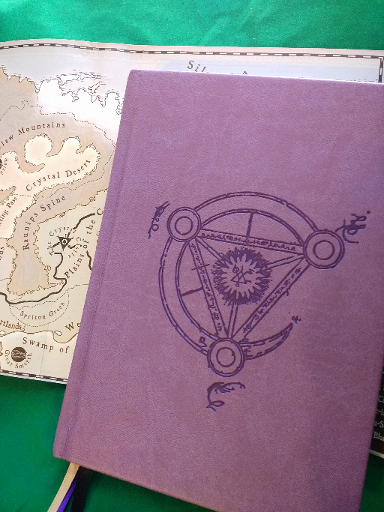 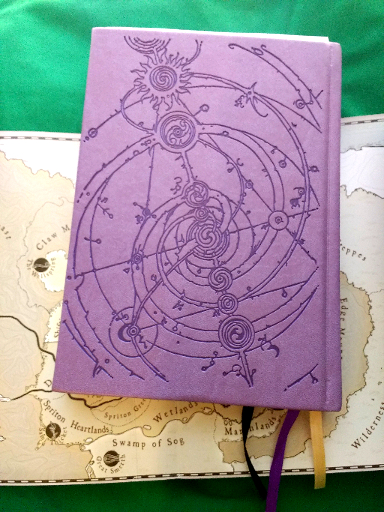 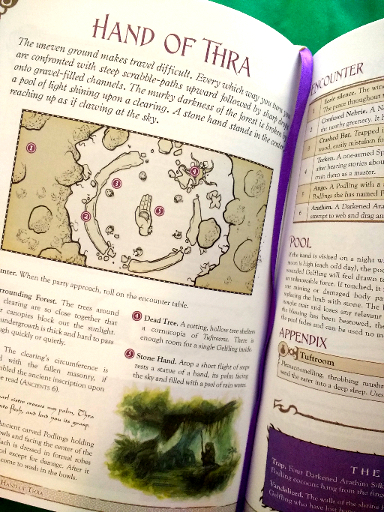 a random page
The game requires polyhedral dice from d4 to d12. It would be helpful to have two of each.

Character generation is quick and easy. Players choose a Clan for their Gelfling PC; and a clan Trait; two Skills, and a Specialization for each; and a Flaw (which is a roleplay, not mechanical, feature). To reflect their health, PCs (and all other characters) have a Creature Die, which is a d6 for all Gelflings.

The basic mechanic, called a Test, is also very simple: roll the Creature Die and add the relevant Skill bonuses (which can range from +0 to +3). It's a success if the roll equals or beats the Difficulty number of the Test.

An opposed Test (any competition between two characters) is called a Challenge. A tie on such an opposed roll is up to the GM to adjudicate. Combat is just a special sort of Challenge that can result in a character taking Damage. When a PC takes 1 Damage, their Creature Die is reduced by one step (eg, from d6 to d4). When a PC with d4 Creature Die take 1 Damage, they roll on the Injury Table, which contains a range of debilitating conditions such as sprained ankle, blindness, and death (or "Return to Thra"). When a PC deals Damage to an NPC with a d4 Creature Die, that NPC is "defeated", and the player decides what that means (eg, a knock-out, retreat, death, etc.)

If conditions for a Test are generally poor, the roll is "hindered": roll two dice and take the lower result. Advantageous circumstances cause a roll to be "improved", in which case the higher result of two dice is used.

For encounters that require more than roleplay or a single Test or Challenge, the game shifts to Action Scene mode. When the GM determines such a scene is appropriate, the players decide what their PCs do-- basically anything that can be accomplished in a few seconds. In practice, this means a single action like a tactical move, using a piece of Gear or a Trait, making an attack, and so forth. Any Test rolls are resolved, and then the play moves to the opposing side. Play progresses back and forth until the GM decides the Action Scene is done.

Characters can carry Gear that can provide mechanical or other benefits. A primary characteristic of a piece of Gear is its Durability, which refers either (a) the number of uses a consumable has; or (b) the number of badly failed Tests the equipment can endure before breaking. A few keywords can also attach to Gear, including a Skill Specialization, which means it can grant "improved" rolls if used with relevant Tests.

Finally, PCs earn Experience Points by adventuring, enduring hardships related to their Flaws, and impressing other players. These XP can be spent to gain new Traits, or to train up a Skill or Specialization from knowledgeable NPCs. Finally, an XP can be traded in for a reroll at any time.

And... that's about it. Aside from Tests, the game is heavily driven by narrative and roleplay. Because the consequences of combat and hazards are so serious, much of PCs' time is likely also spent trying to find clever ways around conflicts and obstacles.

There are a couple weak spots. First, there is almost no guidance for the GM regarding travel and exploration at the Region level, and no examples of the process are provided. An experienced GM can wing it, but the intent of the designers is not clear.

Second, the Creature Die concept seems to break down for creatures (monsters!) that are supposed to be very "one-dimensional". An example is a brute that is expected to be very tough and strong, but lumbering and dumb. By the rules, such a beast would roll (for example) a d12 in combat, but also a d12 to dodge an arrow or to see through a deception, making him more agile than an acrobatic Gelfling. This probably isn't a significant issue most of the time, since such Challenges are unlikely and the GM can compensate with narrative. But it IS possible, after a character death, for a player to run a PC that is not a Gelfling, with a different Creature Die. When PCs are dealing with these Creature Die mismatches, this issue might become more visible in the game.
This game is "very Thra", so much so that there isn't a whole lot of setting background provided up front. As such, it might be difficult to run for or by someone completely unacquainted with Dark Crystal. However, an experienced, creative GM who loves the original film, and who is familiar with at least some of the related series, books, and comics would likely have little trouble.

The adventure provided is vast, spanning the entire world of Thra. It takes place during the period just after the streaming series, "Age of Resistance," but also includes setting lore taken from all the canon sources. In addition, the writers have created new beasts, locales, and stories which resonate nicely with the previously established material. In fact, it seems to have a little of everything: not just the expected Gelflings and Skeksis and Garthim; but also pirates, towering colossuses, volcanoes, dream sequences, sinking temples, vast caverns, spies, wandering poets, undead armies, swamps, ship-swallowing leviathans, mad scientists, cults, eldritch storms, and on and on. It's fun!

As written, it's a fairly straightforward adventure, a save-the-world quest that sees the PCs wandering around Thra hunting for macguffins. It's fairly open for the most part, except that there is a time limit counting down, as the world's regions into corruption one by one (The "Darkening"). Also the final macguffin can never be found before the bad guys get to it, an outcome that may be too railroady for some players' taste. Moreover, the conclusion is, IMO, unfortunately pretty anticlimactic. That said, most of the material is not too tightly coupled to the overarching plot, and seems flexible enough to use as presented, or as a wide-open sandbox, or as a launch pad for one-shot games.

The adventure comprises a couple dozen Region Scenes, each encompassing several Location Scenes. There are also a handful of Event Scenes (such as one associated with the death of any PC) which can happen at any time, irrespective of location. Virtually all these scenes consist of a two-page spread or a four-page fold-outs that includes a small keyed map, a table of encounters, unique NPCs or items, special rules, character advancement opportunities, and so forth. Individual Location maps are generally very simple or linear; but they also cover a wide variety of locales and types of challenges. A few sites also evolve or move as time progresses. Note, however, that there are some places in the book where it appears that important information is missing (eg, a table or creature stats), so a GM will have to either prepare in advance or be comfortable with ad libbing.

A note: Muppets notwithstanding, this is a pretty grim setting in its own way. In addition to the likelihood of maiming or death, there are also mentions of potentially sensitive themes (eg, drug use/addiction, mind control, slavery, and so forth) that might be troubling for some players. A GM should be prepared for such encounters if this is an issue for their group.

The Good
The Bad
The Ugly
Verdict

If it sounds like your thing, then go ye forth and enjoy!


* Edited / Updated to clarify a few items; to add key points I had forgotten; and to include some photos.
Last edited: Mar 12, 2022

Dark Crystal RPG on the way!