Staff member
A very special cover reveal for the next installment in the Judge Dredd series of supplements: The Day the Law Died. 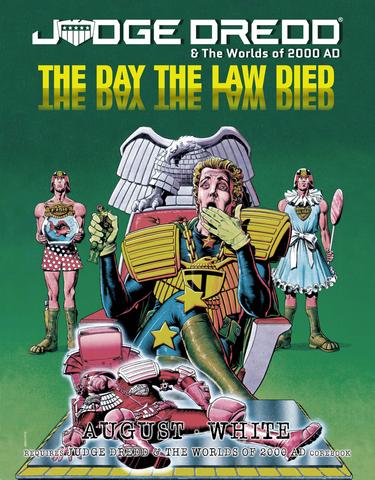 Each supplement for Judge Dredd has followed Joe's career in a chronological order, with Robot Wars throwing him into the midst of a robot insurrection, Luna-1 launching him to the moon for a brief stint as Marshall, and Cursed Earth sending him on an epic journey across the irradiated wastelands to save Mega-City Two.

In The Day the Law Died, Judge Dredd has recently returned from Mega City Two to a hero's welcome. He soon discovers, however, that all is not well in his home city. Judge Cal, the crazed head of the sinister Special Judicial Squad, believes he is the best person to sit in the Chief Judge's chair and soon engineers matters to make this happen. Worse yet, Judge Cal has also brainwashed almost all of the Judges into following his orders without question. In the hopes of toppling the insane Chief Judge, Judge Dredd is left with no choice but to take up arms against his former brothers and sisters of the Justice Department. The echoes of this dark period in the history of the Judges echo for many years.

With lots of exciting content planned, make sure to check back in regularly for more reveals to come. And be sure to check out Morrus's Unofficial Tabletop RPG Talk Episode 97 for a few more insights into future plans!

Is this an adventure for one player?

If it follows true to previous supplements a series of careers for Judges/citizens/perps, mechanics and series of adventures for a team of judges, citizens/perps tied in with the epic story. In this case the events and incidents around The Day the Law Died.

Is this an adventure for one player?
Click to expand...

Yes and no in that order!

Think of it like Dragonlance. Your party kinda takes Dredd's role in the original storyline.

Any update on the ETA of this gem Morrus?

Black Dow said:
Any update on the ETA of this gem Morrus?
Click to expand...

When there's an update, we'll be sure to make it as visible as we can.

No worries chief - looking forward to this one (my favourite Dredd epic from halcyon days).