The Outer Worlds by Obsidian Entertainment

Once upon a time there was a game development studio called Interplay Productions. Interplay created a revolutionary game called Wasteland (which was, in retrospect, somewhat surprisingly published by Electronic Arts).

Almost a decade later Interplay followed up with a spiritual successor. Fallout proved to be both a critical and a commercial success. There was also an actual sequel to Wasteland shortly before that, but even Interplay themselves chose to forget about Fountain of Dreams. Another sequel, Meantime, was cancelled before finished.

The in-house creative team at Interplay responsible for Fallout, who had begun to call themselves Black Isle Studios, quickly followed up with Fallout 2, another success marred only by a slightly buggy release and the unfortunate event of Interplay Productions suffering a financial meltdown.

Interplay Productions narrowly avoided bankruptcy by going public as the Interplay Entertainment Corp. This was only a temporary measure however, as they still continued hemorrhaging money. They moved into an investment deal with Titus Software, owners of Virgin Interactive, whose games (like Freespace 2) Interplay began publishing in North America. Interplay was (and had been) publishing games for other developers as well (like Shiny), but thanks to the deal with Titus the publishing functions eventually were given over to Vivendi Universal. Due to some kind of a licensing deal Fallout Tactics: Brotherhood of Steel was published by Bethesda Softworks during this time. Fallout Tactics had been developed by Interplay's tactics team, 14° East.

Roughly a year after that the director of the first Fallout left the company to form InXile Entertainment. Then a couple of years from that saw the bankruptcy of Titus Software, which led to Interplay in trouble once more. In an effort to avoid bankruptcy themselves they sold a major portion of the Fallout intellectual property to Bethesda. Interplay retained control of Fallout Online, which was to be a massive multiplayer co-operation game.

Before the demise of Titus there had begun development of Van Buren, a game in the world of Fallout by Black Isle. Black Isle having been laid off and the property moved to Bethesda saw Bethesda scrap the 2D game that had been in development in favour of a game using their new 3D-engine. That game became known as Fallout 3.

Several of the key people behind Fallout 1 and 2 had, after the fall of Black Isle, created Obsidian Entertainment. Bethesda being busy with the development of a little known game called Skyrim they gave the creation of the next Fallout game over to Obsidian. And thus Fallout: New Vegas came to be.

Still remember Fallout Online? Black Isle had also been developing a successor to the doomed online game using the name Project V13. Frustration over development problems led to defection over to InXile. Interplay's rights to publishing Fallout games have, as far as I can tell, expired.

InXile came out with the kickstarted Wasteland 2, a love letter to the series originator. On its heels arrived Bethesda's Fallout 4, a true money making machine.

Fallout Online and Project V13 are so tangled up in the legal issues over the game(s?) between Bethesda and Interplay that it's actually even hard to tell which name came first. What is known is that while Bethesda was reluctant to allow Interplay to publish a multiplayer Fallout game they themselves eventually came out with a multiplayer Fallout game in the form of Fallout 76.

Fallout 76 is, well, a great big story on its own and we don't even know the end of it yet.

But that's enough of the past. What has happened now is that Microsoft has acquired both Obsidian and InXile. Inxile is deep in development of the already successfully kickstarted Wasteland 3, while Obsidian is, well.. I suppose "trolling Bethesda" seems accurate under the circumstances:

Bethesda Fallout is not real Fallout, and is in fact awful (yes, I think that about 3 and 4 as well as 76).

I'm very much looking forward to The Outer Worlds to get my spiritual Fallout fix. 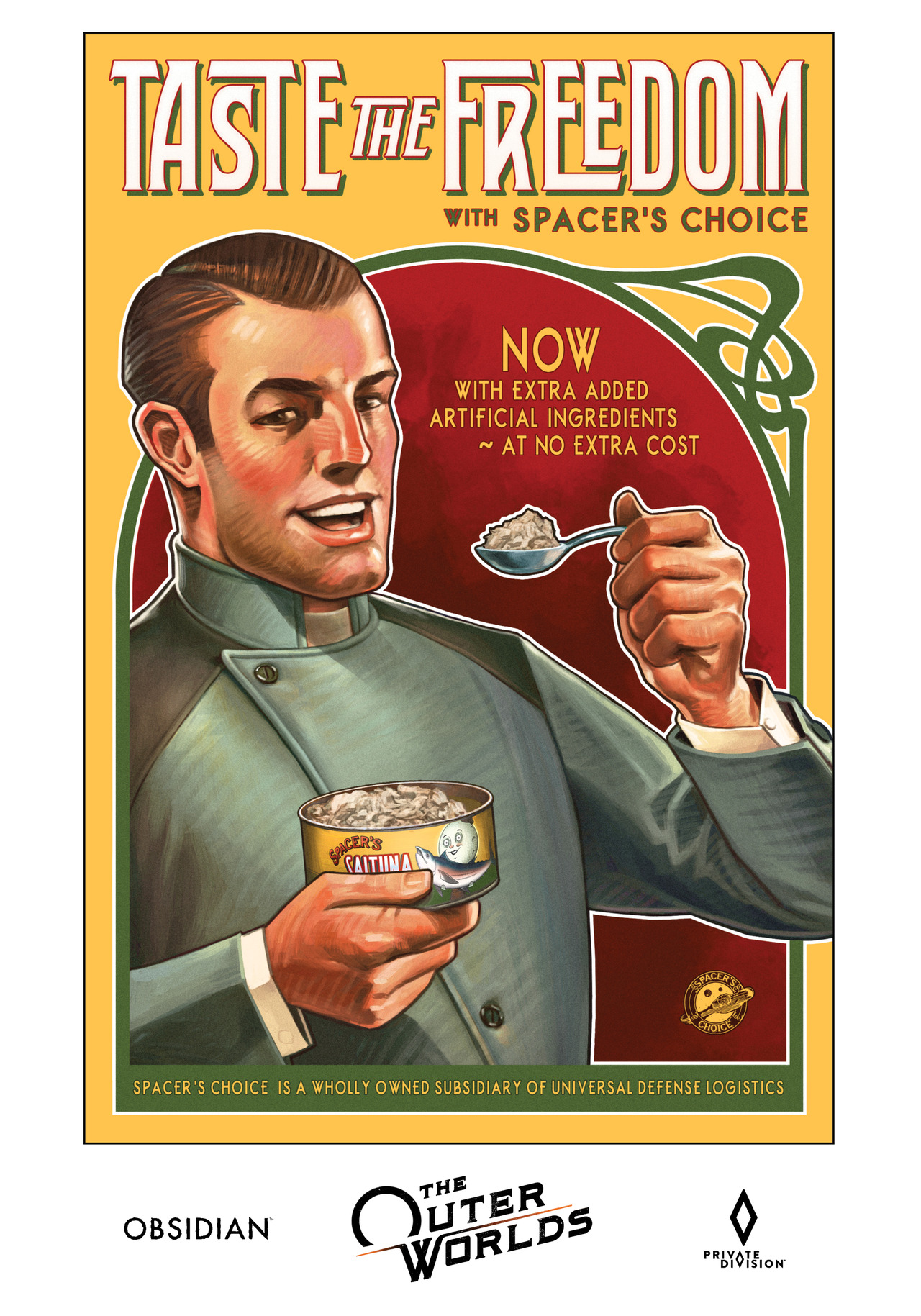 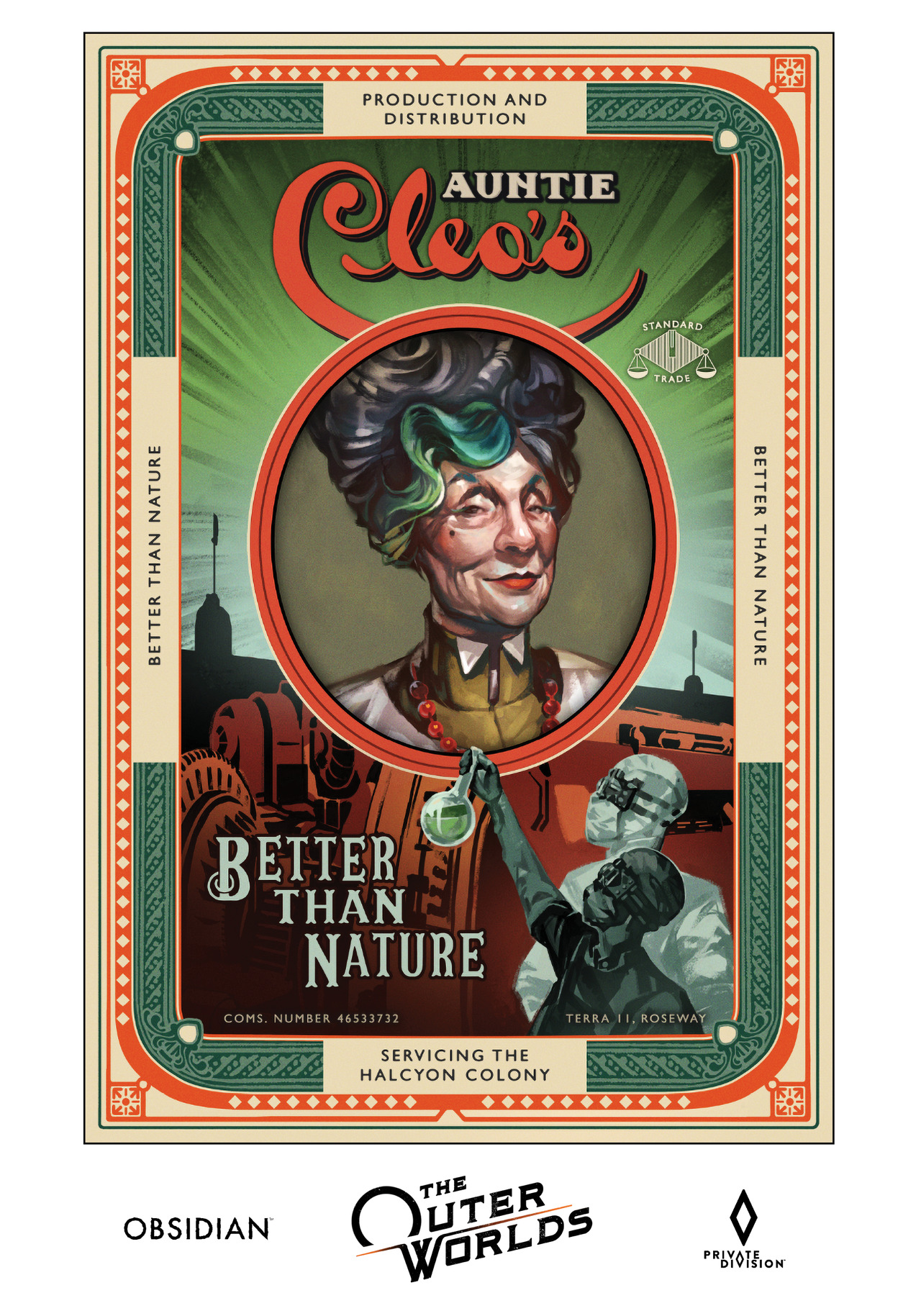 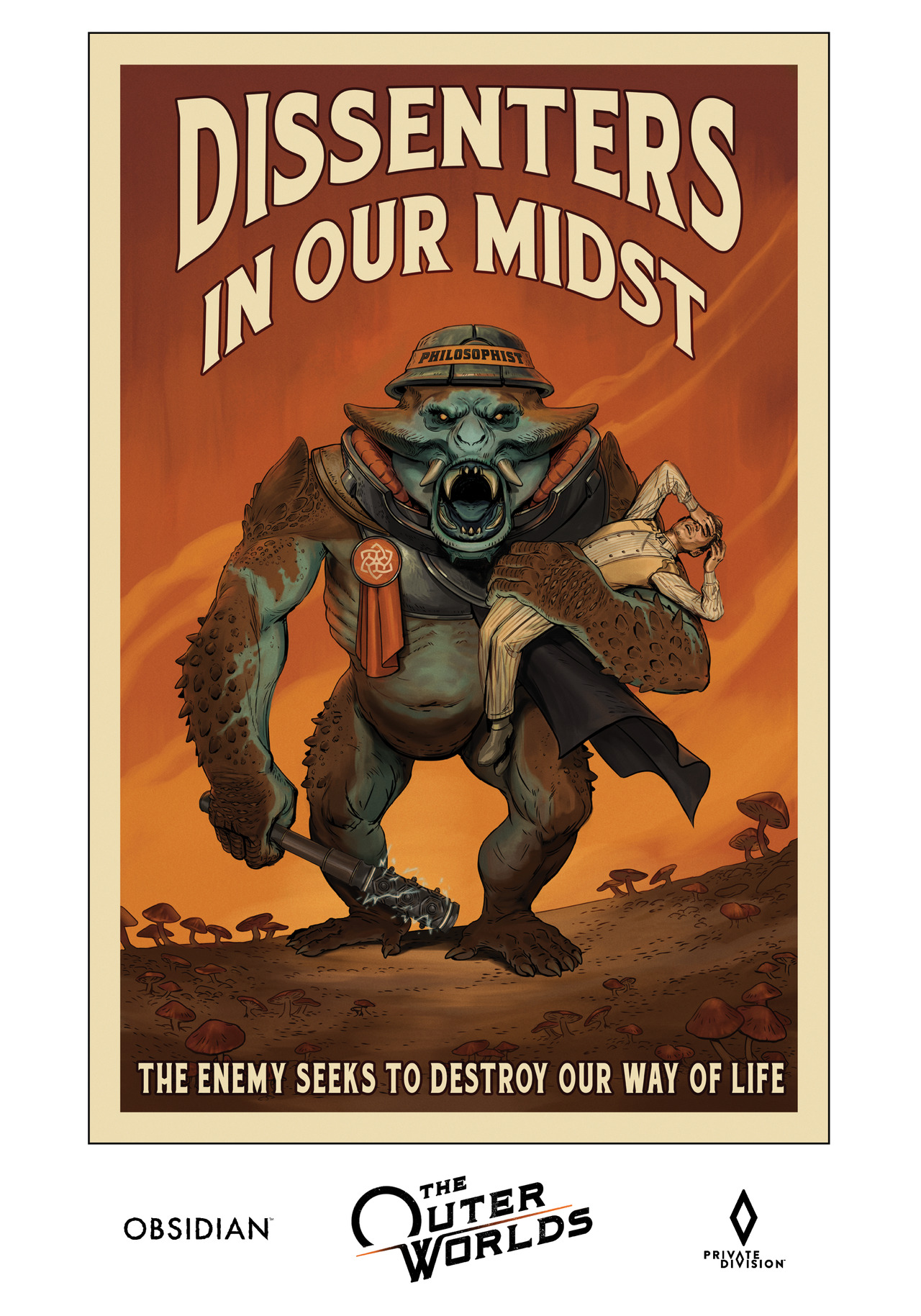 I really like the visual aesthetic they are going for. Very colourful and energetic. Like Bioshoch Infinite crossed with Borderlands.

If Obsidian was for sale I am not sure why Bethesda did not consider acquiring it themselves. "Obsidian did it better," would be a non-issue is they just owned Obsidian. I really liked both 3 and NV. Unfortunately I have not had a chance to play 4 yet, and no interest in 76. I thought for a long time that if they just worked together directly they could have made a great Fallout game.

But it looks like Obsidian is angling to make a really great "Fallout 77" (not my term) themselves. And I am excited to see how it turns out. Way too early though to be confident that it will escape the usual "buggy mess" problem all of these sorts of games seem to have these days.

I mean... I enjoyed 3, New Vegas, and 4. All are pretty wonderful games. I think the landmine they may have stepped on, is trying to turn a great single player game, into an online MMO-y experience. And that doesn't really mesh well with the spirit of the game.

Istbor said:
I mean... I enjoyed 3, New Vegas, and 4. All are pretty wonderful games. I think the landmine they may have stepped on, is trying to turn a great single player game, into an online MMO-y experience. And that doesn't really mesh well with the spirit of the game.
Click to expand...

The Outer Worlds is a fully single-player game.

jonesy said:
The Outer Worlds is a fully single-player game.
Click to expand...