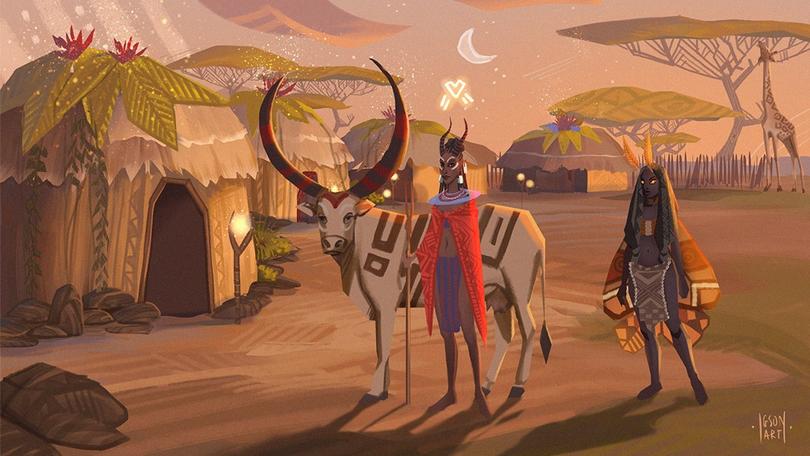 The Wagadu Chronicles is a 5th Edition compatible fantasy setting deriving strong influence from African history and folklore. It details the land of Wagadu, which people are "born into" by falling from the Upper World and are taken in by nearby communities or spirits to start new lives in this new world. History is marked in Cycles of said beings coming down in irregular 'showers,' where the land itself and natural laws themselves can change as a reflection of rising influence of spirit families.

Twin Drums Studio released a 200+ page free PDF detailing this new world. It outlines the setting and also contains an adventure, Child & Oath, and a bestiary of creatures!

Disclaimer: I am not affiliated with Twin Drums Studios. I've been following their work for a while and am a fan.

I do not seem to be able to get to a download page, the closest is one that says sign up for emails.

That is a prerequisite for getting the sourcebook. However I have done so and got the PDF in question quite quickly, so I take it that it's an automated process.

If you are reluctant to share your email address then that's understandable. They are going to get up a KickStarter soon if that's more to your liking.

The art is beautiful. I cant wait to read it.

Supporter
Oh, sweet! I remember hearing about this a few months ago and thinking it looked super-cool. I'm going to check it out now.

Anybody know anything about Twin Drums? Their website is very barebones, so I can't tell who is making it - are the creators even BIPOC/African/of African descent?

Not doubting their sincerity, just hoping this is coming from someone who has a real tangible connection rather than another white person capitalising on the rising popularity of a culture that isn't their own.

Marandahir said:
Anybody know anything about Twin Drums? Their website is very barebones, so I can't tell who is making it - are the creators even BIPOC/African/of African descent?

Not doubting their sincerity, just hoping this is coming from someone who has a real tangible connection rather than another white person capitalising on the rising popularity of a culture that isn't their own.

The main guy writing it (@Allan on twitter) appears to be a Silicon Valley techie type. Judging from his LinkedIn profile pic, he doesn't look to have African descent, though i'm not always very good at recognising that sort of thing. And I don't know who else he's working with on this, creatively.

edit: the Twin Drums twitter has this, though it's referring to PC game development rather than RPG?


Other edit: @AyoolaKike on twitter is listed as another writer, and she certainly seems to have African ancestry. (I hope her name doesn't trigger the Bad Words Filter though...)
Last edited: Sep 5, 2020

humble minion said:
The main guy writing it (@Allan on twitter) appears to be a Silicon Valley techie type. Judging from his LinkedIn profile pic, he doesn't look to have African descent, though i'm not always very good at recognising that sort of thing. And I don't know who else he's working with on this, creatively.
Click to expand...


Wait, nevermind: @Twin Drums on Twitter revealed a zoom meeting screenshot of themselves - "majority female, black + queer" by their own words, as the team making up the online RPG. This TTRPG pdf looks like it's a promotion for the future kickstarter CRPG.

I can get behind this.

Allan Cudicio is the main developer on the book and video game.
Here's the discussion on his heritage in his own words, among other topics

All of this — the fascinating vision and the bold mission — is inspired by Cudicio’s personal background. He grew up in northern Italy, a child of Italian and Ghanian heritage.

Italy is renowned for its patriotic spirit. The people bear a deep, quiet pride in the history of their nation, from the Roman Empire to the Renaissance, from the architecture and art to the language.

Cudicio reflects that stereotype. His exuberant love of Italy was plain to hear, and he added that “in some way, maybe almost paradoxically, my connection to Italy and Italian culture is one of the reasons why I’m so connected to Ghanian and African cultures as well because I feel this love and nurturing I got from Italy, I wanted it from Ghana and from Africa as well.”

He grew up in an African household, exposed to Ghanian culture and languages, as well as visiting the West African country every year as a child and later living there for a while.

The Wagadu Chronicles, then, is a way of paying respect to a part of the world often viewed as other. At the same time, Cudicio is thinking about who might play his team’s game. He reflected on his own gaming experiences, citing Fable and The Walking Dead as two that stand out. As a young gay man, Cudicio found joy and a sense of empowerment in Fable that didn’t prescribe heteronormativity. Meanwhile, The Walking Dead having two protagonists of color helped him feel seen:

“Even as a much more mature and confident black man, it still made me so happy, but on the other hand, it shows how starved I am for representation.” Then he paused for a moment, before adding, “I was going to say ‘I was’ and I said ‘I am.’”

Feeling this way, he believes, is something of a universal experience for people from minority backgrounds or people with disabilities. There is a need to be seen. “And we as game developers provide so much more than fun. We provide visibility, representation, affirmation, confirmation. So that’s why for me, especially as a person in a number of minorities, I have to do this. … I feel like I have a mission. It might seem lofty, but that’s how I feel.”

Looks cool! Thanks for sharing.

EDIT
I LOVE their interpretation of heavy armor. So much better than how Tomb of Annihilation dealt with it.
Last edited: Sep 5, 2020

It's an interesting mix. It seems to be as much an african heroic fantasy as a celebration of social justice and minorities. It's not necessarily my cup of tea, but I bet it's going to be unique.

There's a KickStarter up now. They also have a free download for the "introductory setting" PDF up there, too.

I snagged the PDF, a good ol' thing to read!

The kickstarter being tied to an MMO is..... Well, I'm not sure if the best decision. This may be my gamer self talking here, but MMOs are risky as all get out, and more things from this being tied to such. Additionally most folks are being sold on this by the RPG book and probably wanting more things down that line whereas an MMO is.... Not an RPG product and a whole other series of dangers.

Cautious to see how this goes but, you get as far down the line as I have with MMOs and you start to just be skeptical to any newcomers to the field until they prove themselves. The MMO market is a very different beast to the RPG market.

I agree with the MMO concerns. I'm really here for the 5e sourcebook, and hope that development of the former doesn't cut into the latter.

Supporter
The Kickstarter is on its last 24 hours: 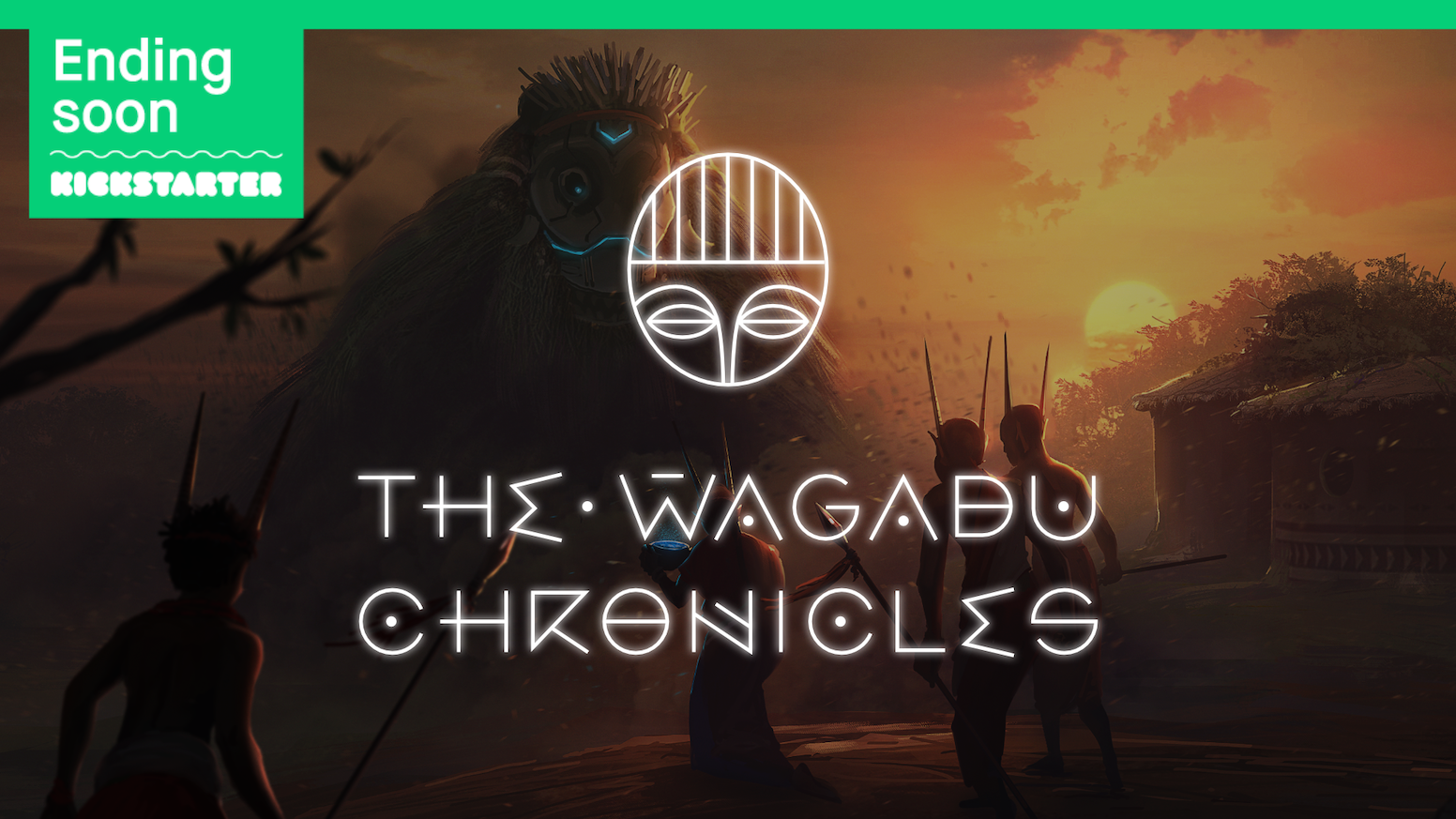 An Afrofantasy world to explore both as an isometric MMO built for in-character roleplay and as a 5E-compatible tabletop setting!