This is a special day, as we have just released what may well be the greatest Traveller campaign yet - Deepnight Revelation. 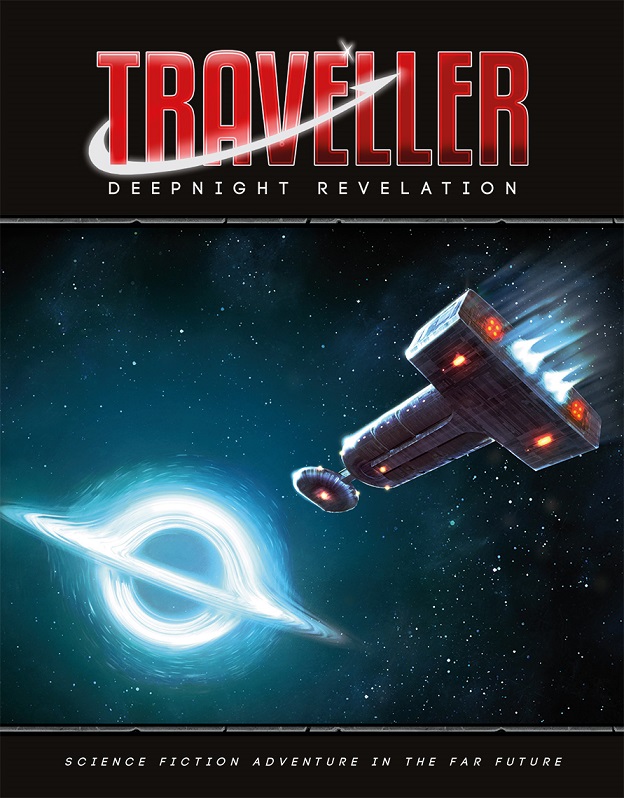 The Deepnight Entity
It was alive when the stars were young. It saw the birth of galaxies, and it will see the death of the universe. It is growth and destruction; menace and saviour. It retreated into a prison of its own making, and there it waits. An exploration ship found the clues, and was destroyed. A researcher touched its mind, and was driven insane. What is it? We must know.

Deepnight Revelation
Deepnight Revelation, a former navy cruiser. Outfitted for the most stupendous mission in human history; a one-ship expedition along the Great Rift to the edge of the Spiral Arm. Deepnight Revelation will explore the uncharted systems along its path; contact unknown species and weather unpredictable dangers. At last we will stand before the gates to the Entity’s prison and demand entry. We will confront the Deepnight Entity and seek answers.

One Ship, Many Stories
There is a place for any Traveller aboard Deepnight Revelation; scientists and explorers, pilots and engineers, diplomats and rogues. There are mysteries to be unravelled, enemies to battle, and situations that require… unconventional… talents. The Travellers can take on any role they please, from humble research assistants to the mission’s commanders. The decisions they make will shape the course of the expedition – and perhaps the history of entire species.

Deepnight Revelation. A voyage beyond everything we know.

Book 1: Deepnight Legacy, the introductory adventure that sets the scene.
Book 2: Campaign Guide, outlining the entire voyage and regions of space travelled.
Book 3: Referee’s Handbook, containing all the rules you need to know to run this epic campaign.
Book 4: Terminus Point, the incredible grand finale that will take your Travellers where no Traveller has gone before...


Deepnight Revelation will be expanded with a total of six new books, each looking at specific stages of the great voyage, with new adventures, alien civilisations, cosmic mysteries, and the grand majesty of the universe.

Kickstarter backers have already started chatting about their own experiences of this massive campaign. Come and swing by the forum thread right here: Deepnight Revelation - GMs Thread - Mongoose Publishing

Is character generation handled differently for this than it is in regular Traveller?

MGibster said:
Is character generation handled differently for this than it is in regular Traveller?
Click to expand...

No, the way we have set things up, you can create new Travellers or bring existing ones in.

If you want the more 'military' approach, you will find the creation system in the Element Cruisers set to be most compatible!

M
(Traveller) The Greatest Voyage Ever Is Here - Deepnight Revelation