Troika! uses 2d6 to facilitate adventures in which player characters travel by eldritch portal and non-Euclidean labyrinth and golden‑sailed barge between the uncountable crystal Spheres strung delicately across the hump-backed sky. A kickstarter, The Big Squirm, just funded for a detective adventure set in the city of Troika. Daniel Sell was kind enough to talk to me about Troika!, his kickstarter, and the various Spheres spread like sparkling jewels and rotting skulls across the star-studded darkness. 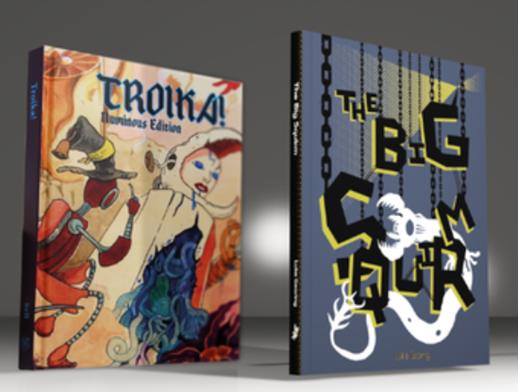 Charles Dunwoody (CD): Troika! has an amazing implied setting where flights through the star-studded home of void beasts can be as dangerous as trying to take an elevator or stairs to the sixth floor of a hotel in the city of Troika. For those new to Troika!, what do player characters and GMs do in game?
Daniel Sell (DS): Troika! is what would have happened if RPGs Appendix N was British New Wave rather than American Pulp. The players play characters, the GM moves the world, but instead of exploring the wilderness and beating up the locals we’re moving through a world that’s very old and set in its ways; everywhere is cities and obscure people doing the same thing they’ve been doing forever. You might still beat them up though.

CD: One of my players described Troika! as horror Dr. Seuss: colorful interesting beings living loud, jubilant lives while body horror and violent death lurk in dark corners waiting to tear off jawbones and commit bloody murder. How would you describe the tone and theme of Troika!?
DS: It’s a colorful, dense, decaying and joyful utopia where anything feels possible but not for long.

CD: Troika! has a great set of mechanics and my favorite is the random draw initiative which also ends randomly each round. How do the mechanics power the science fantasy worlds of Troika!?
DS: The randomness is deliberately provocative. For instance, some people will be given a random Skill level and Background and balk at it, saying it’s unfair that others got a better lot. Others will embrace it and dance at the end of the world. Some of the first camp will learn the rhythm and other won’t, and that’s just how it goes. The rest of the game is designed as parcels of joyful discovery; spells are tiny gifts, and there’s a million of them. It’s important to feel like there is more of a world out there than you’ll ever get to see.

CD: The backgrounds PCs hail from are wide and varied. I really like the Monkeymonger (used to sell Edible Monkey until he fell or jumped off the Wall and into adventure) and the Thinking Engine (robot with amnesia). What are two of your favorite backgrounds in Troika!?
DS: I like the Pond Pisser and the Zoanthrope. They have everything that’s core to the game and are only enjoyable if you’re in synch with the vibe. Each gives you so much material to play with, your whole world is laid out ahead of you, you can feel how you’ll be interacting with everything and it’s a delight. It’s like you’re holding on to a bolting horse and that’s how it should be.

CD: If Troika! isn’t about a Russian vehicle pulled by a team of three horses abreast or a group of three administrative or managerial people working together then how did you come up with the name of the RPG and city of Troika!?
DS: It’s a word that convincingly sits between fiction and reality and can have some resonant weight while also being fun to say. Troika the city is the way into the world for the players. If it was called, for instance, Boslog you’re just moving towards this distant thing that you’ll have to build up (or not) meaning around, while Troika you’re already taking some baggage with you and might find some fun synchronicities. Nonsense words are never very fun.

CD: A hard-boiled roleplaying game adventure above the mean streets of Troika is right up my alley. Please tell us about the Big Squirm adventure (more on the kickstarter itself below). And the worms.
DS: Luke Gearing (Fever Swamp, Acid Death Fantasy) has made the perfect introduction to the city. Players play as investigators in a the green-lit streets of Downgate Arches on the hunt for the perpetrators of a very specific crime. The rich residents buy and sell future clutches of Scarf-Worms, speculation is rife, and this year they were all worthless (and highly dangerous) Pretender Worms. Who did it? Who’s profiting from it? Who’s going to pay? Depending on who they decide to work for it will all play out differently.

CD: I’m looking forward to all the things. What items are you offering through this kickstarter?
DS: We went a bit mad. In addition to the extremely handsome book here are tear-off character sheet pads, a very posh GM screen, a poster map of Downgate Arches, mugshot postcards, die-cut initiative tokens (+bag) and we’re even putting a ribbon in the book. By the time this comes out people will have to hop on the Backerkit to get them though since we’re only making a small number of them for the crowdfunding people. Get in before we throw the leftovers in the bin! 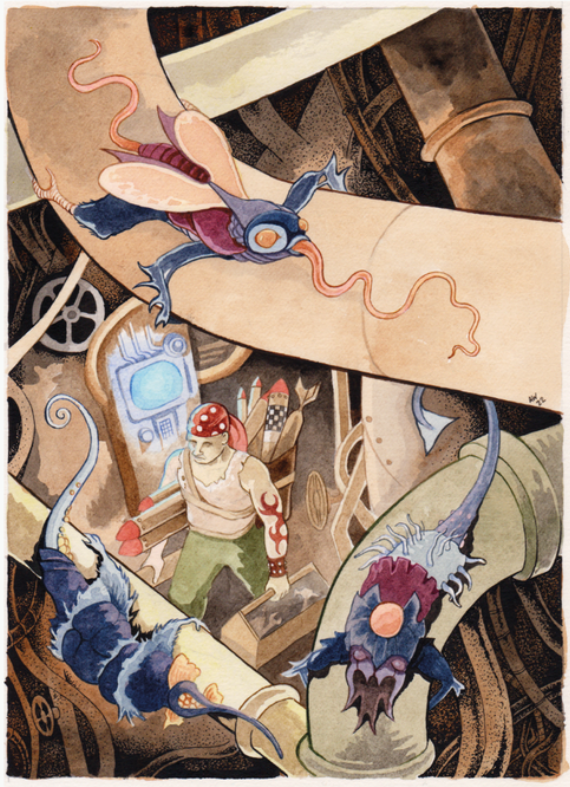 CD: Many readers of EN World are D&D and Pathfinder players. What would you say if they asked why they should try Troika! (beyond just the Edible Monkeys)?
DS: There’s a huge world out there and a limited amount of time, it feels like a waste to have the same thing every day. A lot of people like to only read books from the same author, watch films from the same studio, eat food from the same restaurant etc. every day. There’s a reliable degree of variation inside those narrow corridors to keep us coming back. That’s fine but it’s not my preference.

CD: Bundles are great: Troika Starter Bundle and Troika Adventure Bundle. Where can fans go to find your work and what are other RPG books do you offer?
DS: We can be found at www.melsonia.com and all good game shops. We’ve got a bunch of varied Troika! adventures and resources plus a couple of unusual D&D adventures and a huge fictional field-guide to mushrooms. Adventures are the real meat of what’s on offer, it’s like inviting a strange GM to share the table for the night.

CD: Thank you for the interview. Any final comments you’d like to share with the readers of EN World?
DS: Read fewer and play more games.
Click to expand...

Troika is quirky and cool. I love the characters.

Got the game, and many adventures. Haven't yet had the chance to read it. It's one of a dozen flavors of D&Dlikes that I own, in addition to my actual D&D 1, 4 and 5. It just seems like such a quirky setting, I need the right players to participate. Someday!

Eyes of Nine said:
It's one of a dozen flavors of D&Dlikes that I own
Click to expand...

Troika! is based on Advanced Fighting Fantasy 2e a very different game to D&D from a mechanical perspective.

Actually I just bought the hardback last month so read, but nowhere near playing yet. I got it as it's often referenced with Into the Odd and Electric Bastionland which I love.
Apparently I'm a British OSR kinda guy. Who knew?

Troika! is like what if you were playing an RPG with Monty Python's Flying Circus while tripping on acid. But not a lot of acid, you still have to be able to talk and roll dice. I've never done acid though so I might be wrong.

It was quite creative, I remember that! I had a hard time getting a picture of the world, but maybe that's on purpose so you can build it a lot of different ways?

Blue Orange said:
It was quite creative, I remember that! I had a hard time getting a picture of the world, but maybe that's on purpose so you can build it a lot of different ways?
Click to expand...

Yes, the idea is to take the bones and lovingly graft on the flesh as you build your own personal Frankenstein! Brain of deranged criminal optional but recommended.

I've been running a Troika campaign these past five months, and we love the sheer freedom that the insane patchwork aesthetic gives, where anything can happen next to anything else and the PCs themselves are as bizarre as any other patches in the patchwork.
Some sainted person made a Troika character sheet for Roll20 that automates the Fighting Fantasy dice system and makes it even easier to use. And there's an online turn tracker tool that also works great, though you have to remember to subtract tokens when combatants die.

Aaaah! I somehow missed this Kickstarter. Hope it will be available for purchase afterwards. I really like Troika. It's just such a well-considered design. I ran it for my group, and most of them liked it. We played the introductory adventure from the book, and I added a pamphlet adventure (House Party) at the end, since my players wanted to go to the party. I hope to get it to the table again. Just a great book, with a great layout, and a friendly, sensible writing style.