At Gary Con, Goodman Games and WotC announced a partnership, as reported by Brett B over on Google+. They'll be reprinting classic modules, including B1 In Search of the Unknown and B2 The Keep on the Borderlands in a hardcover with both the original adventures and 5th Edition information. More information if and when I hear it! 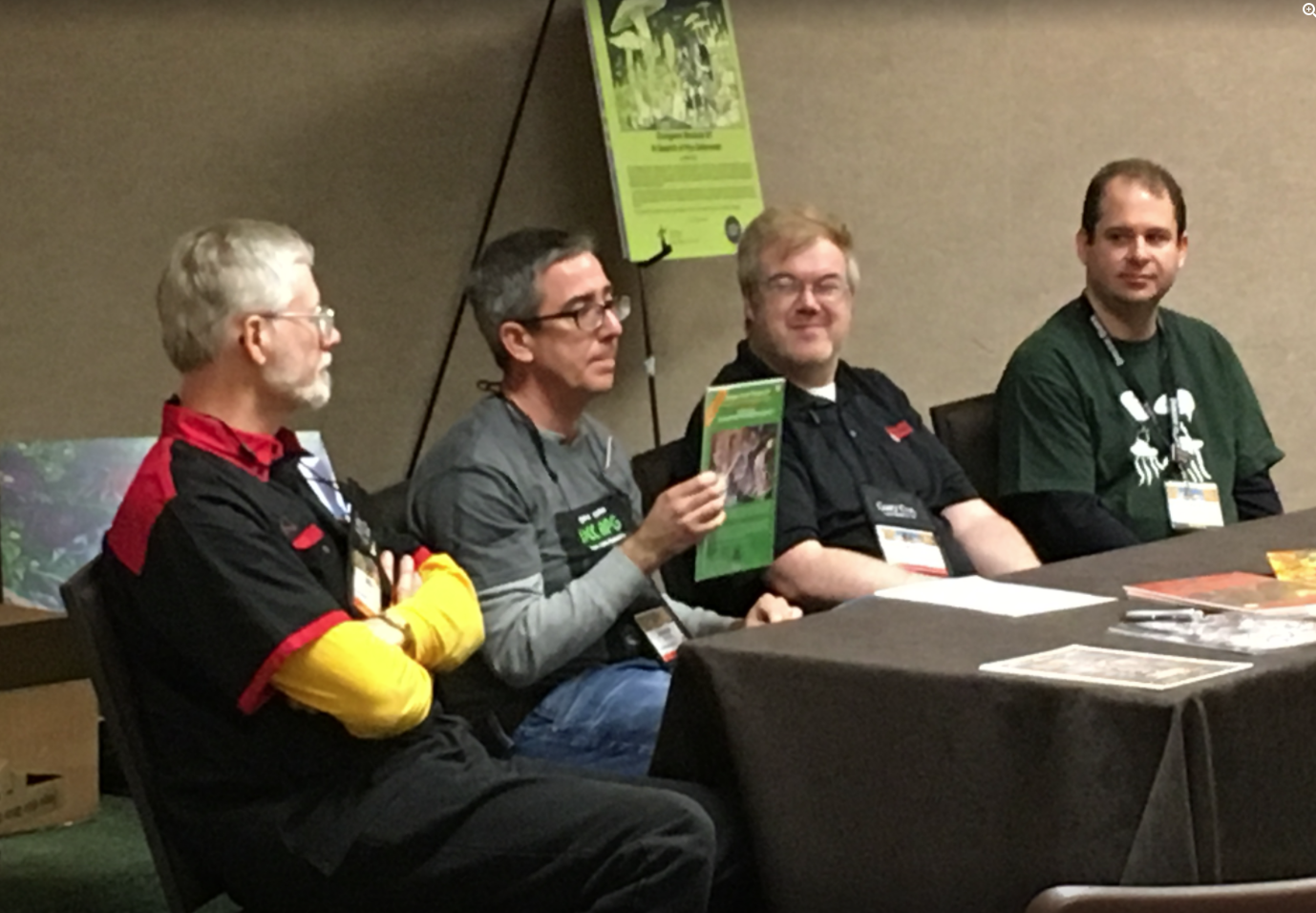 Photo by Brett B 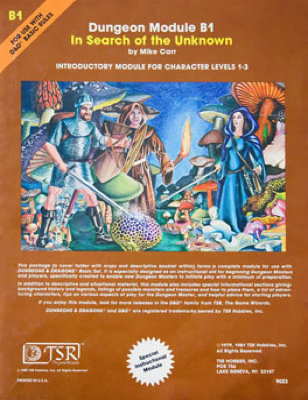 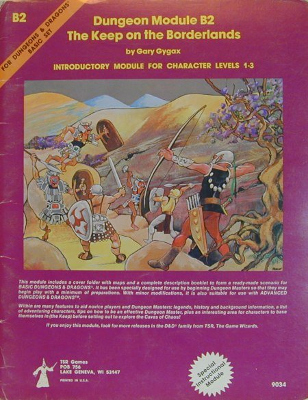 Very exciting news from the “What’s New With Goodman Games?” seminar at Gary Con this weekend: Goodman Games has partnered with Wizards of the Coast to produce hardcover Collector’s Editions of classic D&D modules! These editions will include the adventures as orginally printed, complete conversions of the modules to the 5E ruleset, new 5E content, and behind-the-scenes historical content!

Present at the announcement were B1 author and industry legend Mike Carr, D&D lead designer Mike Mearls, and Chris Doyle who will be doing the 5E conversion.

Here is the full press release:

First Volume Contains B1 and B2 Converted to Fifth Edition, Plus Insider Commentary, and Original Art

Goodman Games is pleased to announce a partnership with Dungeons & Dragons to publish deluxe collector’s editions of classic D&D adventure modules! These commemorative editions will appeal to fans of Dungeons & Dragons across multiple editions. Each volume will include digitally restored, high-quality scans of the original 1970’s-era adventure modules, presented in their original published form. In addition, each volume will include a conversion of that original adventure to the fifth edition rules set. This format allows nostalgic gamers to re-live the adventures of their youth, and play those adventures again in a modern rules set! For gamers with families and children ready to receive the torch of gaming, this volume is the perfect format to share fond adventures with the next generation playing the Dungeon & Dragons fifth edition rules. 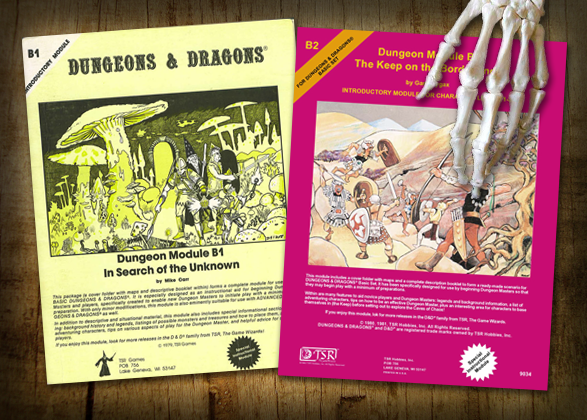 The first hardcover collector’s edition will include B1: In Search of the Unknown and B2: The Keep on the Borderlands. These classic adventure modules were played by millions of gamers in their original editions. Among other things, the book includes:


The deluxe hardcover volume is anticipated to be available at Gen Con with general release in September 2017. For additional information, visit Goodman Games online at www.goodman-games.com.

Staff member
This post was generated by a news article which your device or browser is not displaying directly. You can view the article directly here.

Awesome. Even thought they're not hard to get hold of, I like introducing more new 5e players to stuff like Keep - it was a great example of a good starter area framework with no dominant metaplot where the DM can get their training customizing to fit their table.

Interesting. Only those two?

I'll pick it up. I'm a sucker for B2, even if I don't run it using 5e again. Certainly, a pairing of GG/WotC to produce more nostalgia reprints seems like a no brainer. Its free money for both companies and this point.

Interestingly, assuming this thing is produced this year, by years end we'll have I6 (through Curse of Strahd), S1, S2, G1-3, C1 (through Yawning Portal) and now B1 and B2 all back in print! Guess this IS the nostalgia edition!

Looks like B1 and B2 are just the beginning. Also the originals meant are not the ones we've become used to. They are versions earlier than that with different art. Or something. Not sure yet.

I hope they keep all the original artwork as well as the maps. I have never played a module that old but I do hope they redo all the classics (and all the old modules), yet I know that isn't realistic but would be great!

Aren't you a little short to be a hardback?

Mistwell said:
Aren't you a little short to be a hardback?
Click to expand...


I can almost see Mike Mearls taking off a Stormtrooper helmet and saying, "We're here with General Gygax, we're here to rescue you!"

Henry said:
I can almost see Mike Mearls taking off a Stormtrooper helmet and saying, "We're here with General Gygax, we're here to rescue you!"
Click to expand...


It was a tough call - "General" fit the joke better, even though less accurate.

Could this be one of the four unnamed products?

darjr said:
Looks like B1 and B2 are just the beginning. Also the originals meant are not the ones we've become used to. They are versions earlier than that with different art. Or something. Not sure yet.
Click to expand...

They could go all out and do "In Search of Adventure" which was B1-9 (10? Don't remember). It combined all the earlier adventures into a sandbox adventure with different branching options.

I hope it is not a "conversion" where they print the original, followed by a few pages of text to convert the old stuff to 5e. I hope that the original and a whole new 32 page module are combined to a 64 page booklet.

darjr said:
Wizards of the Coast is teaming up with Goodman Games to produce a new hardback of B1 Keep on the Borderlands and B2 In Search of the Unknown.

The new book is to include the full originals and 5e stats. At this point I don't know if it's to also include DCC stats or any new art or maps.

Nice. Hope they reillustrate it wholly.


Sent from my SM-G901F using Tapatalk

aco175 said:
I hope it is not a "conversion" where they print the original, followed by a few pages of text to convert the old stuff to 5e. I hope that the original and a whole new 32 page module are combined to a 64 page booklet.
Click to expand...


I'm going to be highly irate if it isn't entirely new content. Some of us have been pestering Wizards for more than a year about converting old modules. Those of us who've been working with www.classicmodulestoday.com at least give you those pages of text which let you update the 1/2E mechanics to 5E, but that's all Wizards would allow anyone to do. Every time I pitched it, I got fobbed off with form-letter responses. Maybe i just didn't know the right people.

As long as they don't try and dump it into the Realms with some really lame excuse as to why it's there then I say this will be good.

Wow, this has to be the easiest product to do.
Reprint B1/B2 & just edit the Stat blocks to read Orc: see page x of 5e MM, etc.

​
Goodman Games reprint of metamorphosis alpha was amazing quality. Hopefully this is the same. Curse you Goodman Games, you just made me plunk a wad down on your Lankhmar box set (I love the setting and am a sucker for a box set), now this.

Looking forward to seeing their results

I hope there's a digital edition as well, so that it'll be easier for myself to obtain.

(And also that it releases soon, as I have the caves of chaos in my next D&D game)

I hope they are fully colored with all new art and enough new content to justify hardcovers.