Middenheim is one of those places you don’t easily forget. It could be a Chaos cult trying to burn down the city. Or imaginary rat-men said to be lurking just beneath the street. In The Horned Rat (PDF only), the PCs get the chance to walk the streets again and the threat this time is truly cataclysmic. If the PCs don’t prevail there will be literal hell on earth. 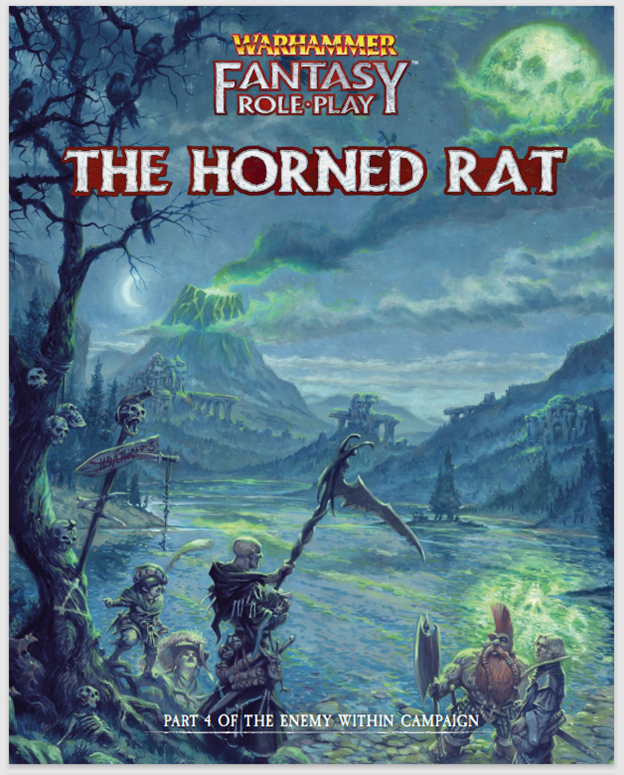 Spoilers ahead! Players, please send your GM this way. Cubicle 7 kindly sent me a PDF of The Horned Rat to help me in my continual coverage of all things Warhammer RPG. And the first thing I noticed was the map of Middenheim. Stunning. Two versions, one for the GM and the other for players. The CM version has more detail while the player version also touches on faith, strife, and cheer in the city. 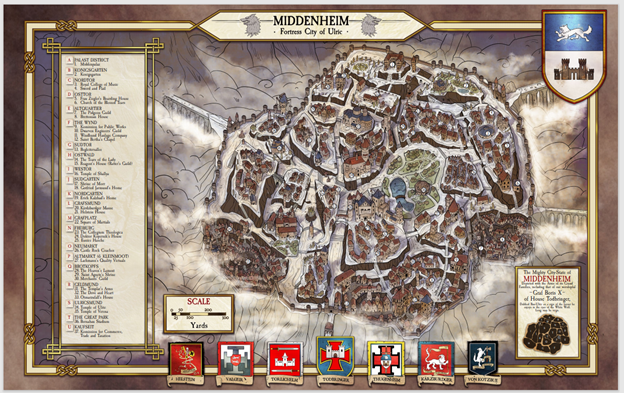 I first visited Middenheim while running the Enemy Within for Warhammer FRPG 1E. I went back and ran Ashes of Middenheim for 2E. And now The Horned Rat brings me back again. Middenheim seems like a great city, but it sure needs heroes.


Middenheim is under threat and no one believes it. Because pretend rat-men. These Skaven have been running a disinformation campaign for years to make people believe they aren’t real. They are insidious and it is this type of Machiavellian long-term plot that makes Warhammer unique and wonderfully horrifying. Not one wants to talk about the Skaven even as they tunnel beneath the streets and plot horrible death and destruction on a massive scale.

And the stakes are big. The Skaven want to blow chunks off the Chaos moon and bring meteorites raining down to destroy cities, mutate the humans, and make the land uninhabitable. The PCs could fail if they don’t dig deep enough into the mysteries fast enough and then fight hard enough and quick enough to win the day.

I love this. This module contains everything great about Warhammer: dirty grubby gross enemies with hidden secrets, a sprawling city filled with duplicitous people, and hard-won secrets and combats for PCs to contend with. And The Horned Rat is dark and creepy. Disgusting diseases, autopsies, cloaks made of greasy human hair, assassinations, and more. Middenheim is haunted not by ghosts but by rat-men and the darkness some of the Middenheim humans have embraced. The PCs have not only urban adventures but also venture out into the countryside and into the mountains.

The adventure is complex with many NPCs and various clues to find. A flowchart shows the relationships and interactions between cultists, Skaven, traitors, and organizations in the city. The PCs can wander around, pull on various threads, and slowly unravel the plot to blow chunks off the Chaos moon to send down Warpstone for the Skaven to harvest. And to bring real ruin and mayhem to the world of men of course. Another chart includes a large list of NPCs and where on the spectrum of belief about Skaven they are ranging from Skaven aren’t real and those who suggest otherwise are fearmongers all the way up to full acceptance. There is also a timeline of events to help the GM keep everything sorted out.

In addition to the adventure there are a few pages discussing Skaven and providing game stats. Skaven can see in the dark, carry disease, and the worst carry Warpstone weapons or poison gas. The PCs will also face cultists, traitors, and a few monsters along the way.
The Horned Rat is part four of the new version of The Enemy Within. It really works best as part of that ongoing adventure, although this adventure has options for starting with this one. A quintessential Warhammer Fantasy RPG (Starter Set) adventure and not to be missed if for the unique Old Word experiences it brings such as Skaven, dangerous dirty secrets, cults, dangerous magic, and corrupting Chaos.

I am splint on the city map being abstract versus more technical. Ideally having both would be great.

Most of it. This was the adventure they intended to slot into the 4th spot, but managerial decisions forced Something Rotten in Kislev there instead. That said, there are, I believe, updates to one or more older scenarios in the back; they usually do that.

Having had a chance to look at a copy, I can say that I prefer this adventure immensely to SRiK, which was the weakest of the Enemy Within adventures and broke canon in a lot of ways. I still have to digest the scenario, but I'm optimistic that this will be a strong entry in the series.

Hmmm haven't really encountered this but it seems interesting. Where can I get a copy of this? Do I need to buy it online or is it only applicable on certain platforms? I hope to try this out soon.

”Rodents of unusual size? I don't believe they exist.”

themarkwilkinson said:
Hmmm haven't really encountered this but it seems interesting. Where can I get a copy of this? Do I need to buy it online or is it only applicable on certain platforms? I hope to try this out soon.
Click to expand...

I pre-ordered my copy on the Cubicle 7 website. It's not in print yet, but they sent me a link to the PDF on Drivethrurpg. (I've so far received the first 2 volumes and companion guides in print.)

Retreater said:
I pre-ordered my copy on the Cubicle 7 website. It's not in print yet, but they sent me a link to the PDF on Drivethrurpg. (I've so far received the first 2 volumes and companion guides in print.)
Click to expand...

Yeah, I know someone who's buying all-in on the Collector's Edition. I'm a huge fan and will run the crap out of the system/setting, but that's too rich for my blood.

Liane the Wayfarer said:
Yeah, I know someone who's buying all-in on the Collector's Edition. I'm a huge fan and will run the crap out of the system/setting, but that's too rich for my blood.
Click to expand...

I agree. But in my opinion the standard editions are fairly priced, especially considering the quality of art and presentation. And the PDFs are even more affordable, if you'd want to go that route.
Even as someone who doesn't plan to run the campaign, I'm happy to have them in my collection.