You tend to run out of ideas pretty quick at really high levels, because most of the available monsters are rather same-y. Because you need to give them so much just to be a challenge, which means they all have the same bag of tricks. 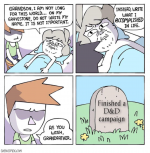 My ratio of DMing and completing campaigns was once inverse to my income. That is, in high school and college, I had a lot more free time and I was able to game longer sessions, with regularity, with my friends. Ergo, most everything was expected to be level 1-20. Epic metaplots. Even so, I only managed to get two AD&D groups to level 20 during this time. Two.

After I took my first real job, I still tried to keep this expectation. Didn't happen. Not even close. People come and go. Jobs change. Kids, obligations, and so on. Age of Worms? Close but no finish. Savage Tides? Good try. Kingmaker? Got to last module and key player went back to get a degree. This is, and will be, a period of constant change for most gamers.

I did try anti-burn out ideas such as a board-game or gamer movie day from time to time. That helps, but it wasn't going to help with people simply having to move on in life.

Now I'm settled, with kids and a family and a good job in a good city. I've sought out gamers who were similarly situated (age, career wise, got the kid/family thing figured out, not planning to move!, etc.). That means I'm not looking for casual, intermittent play with strangers at the game store. In doing so, I've increased my chances of finishing campaigns. Even so, it helps to not have every campaign go 1-20. Pool of Radiance, level 7 max to try out 5E? Done. Curse of Strahd, level 10 max, 1 year? Done. Out of the Abyss, 1 year, doable and done.

Summary: After building a graveyard of half-complete campaign ideas, I've settled for realistic ones limited in scope while simultaneously seeking similarly situated persons. It's upped the odds of a satisfactory ending rather than "hey, we missed 4 straight sessions, let's roll up new characters and try something else..." It doesn't mean I won't try a level 20 adventure someday. But it has to be one helluva campaign.

As a DM I only had one campaign with a proper ending (2e) after 5 years of play. Before that I didn't really know what I was doing. After that real life gets more complicated and the groups were not stable.

I had one 3e D&D campaign that ran its course naturally with the same players but it was short. More like a level 1 to 5 adventure module. 1 year.

My current 5e campaign is on hold but I expect it will end in a satisfactory manner. The group is stable. 2 years in the making so far.

I didn't play much over 40 years. I only participated in 1 campaign that had an ending (2e) planned by the DM. I believe it laster 12 to 18 months.

I participated in an AD&D campaign that ran for 6 years from age 18 to 24. It ended because we outwitted the DM and repelled a sea invasion by an Arab-like civilization. The DM was morally crushed, he never continued it. I consider it a success since we went from level 1 to 11, had land, troops and were heroes of the kingdom.

However, last night I completed a 1-20 campaign for 5E that lasted 122 sessions over nearly 4 years.

Very rare for me.

Usually things either break up before things complete for one reason or another, are open ended campaigns without end points, or things end in a TPK.

As a player I have completed homebrew adventures, specific Dragon magazine and Dungeon adventures, in 3e a bunch of individual modules such as the Banewarrens, and some of the 3e core modules, Pathfinder a few individual adventure path modules but not the whole AP, and 4e a couple home brew adventures.

As a DM I have run some modules to completion in ongoing campaigns (lots of AD&D ones, Death in Freeport, Lord of the Iron Fortress, Demon God's Fane, individual Paizo and Legendary Games ones) but not a whole Adventure Path without a TPK or disruption before finishing, so far.

In regards to all the campaigns started vs. all completed...I have a horrible and terrible rate it appears.

Probably something around 5-10% of my campaigns ever get "completed."

I would say that for over 50% when we start we don't actually have an endpoint planned though. We keep playing...until we don't.

Those that do have an endpoint planned though...all too often we fail to get to the end. We either start a new game, a new system, or life gets in the way.

Or (one more that popped into mind) the DM (unfortunately, usually me) just gets bored with it all and decides to start a new campaign.

I've been running the same campaign for many years now, so my success rate is 0.

1) I ran Castle Dracula (Castlevania, DM's guild) from 3-13 successfully. Started with 7 players, lost 1, completed with 6. 1.5 years.
2) My current campaign, a follow-on (to be published eventually) in another area of the world with the same characters started with 6 (5 from the original + 1 new), and has lost 1 player, who was replaced by another. Still ongoing, with one session skipped so far out of about 8 due to player availability issues.

3) The one campaign where I was a player got put on pause at level 5 or level 6 (from level 3) due to work stuff by the DM. We started that with 4 players, it immediately went to 3, and most of the sessions have been with 2 players due to work.

I have never "completed" a campaign, as either a player or a DM, going back to 1987. Every campaign that I've been involved in has simply fallen prey to real-life getting in the way in one form or another.

It's probably important to note that I've spent exponentially more time reading the books and on forums than actually playing D&D for the past two decades.

Baron Opal II said:
One, I think. The only campaign I had that had a defined ending was when I was a teenager and we were all headed off to college. Everything after that in about 25 years of gaming hasn't had a pre-defined ending point.
Click to expand...


Our playtime is down to half what it was 20 years ago.

5E might be my last edition regardless of what 6E is.

And it's just because of real life.

50% for long-form campaigns - I'm not counting the ton of 1-4 session short games I've run. I ran a campaign back in college and one in grad school that didn't finish. My more recent two campaigns - a 5e levels 3-20 game that went for 3.5 years, and a 13th Age levels 1-9 game that went for a bit over 2 years - both finished successfully. They didn't have pre-defined endings, but they came to a point that closed out the events of the campaign well. I'll admit I blitzed through the final few levels in both though - could have ended at an earlier level, but wanted the players to get to use some of those cool high-level powers of theirs (and in the 5e game, the level gain was also being imposed by an in-world force and serving as a timer to the characters exploding).

Recently I took a group of noobs through the Essential's Kit adventure, Dragon of Icespire Keep. I'd consider that both a long adventure and a short campaign. We completed it in 21 brief sessions. However, the players have decided they want to continue...so technically we've gone from having completed a short campaign to now playing through an uncompleted long campaign. Meddling kids!

I am 3 for 5 in the 5e era. One of the ended early campaigns was due to the Pandemic and we may resume it or not this summer. I tried 4e, but my group did not like it. I completed a fair number of 3.x campaigns. I also have completed a few WFRP campaigns.

In the early days of the 70s and early 80s I did not really think in terms of completing campaigns - it was always open-ended. Some of those lasted for years, but it was all open-ended without a finishing point game-wise.

The only reason we complete a campaign these days is because we play until level 20. Even then, I usually run a few epic sessions so the PCs can have fun with their super powerful abilities.

It has been interesting watching my youngest son (Freshman in HS) trying to get an ongoing campaign started with his friends. Last minute cancellations are driving him crazy and has made him realize my weekly game where everyone shows up every time is not really the norm. Old Man voice: "Back in my HS days we had nothing better to do than sports and D&D and we liked it!"