Greetings, fair reader, and welcome to a brand-new science fiction and fantasy role-playing magazine, White Dwarf. In the pages of this tome, you’ll find reviews, how to play Dungeons & Dragons competitively and what really makes a monster evil. 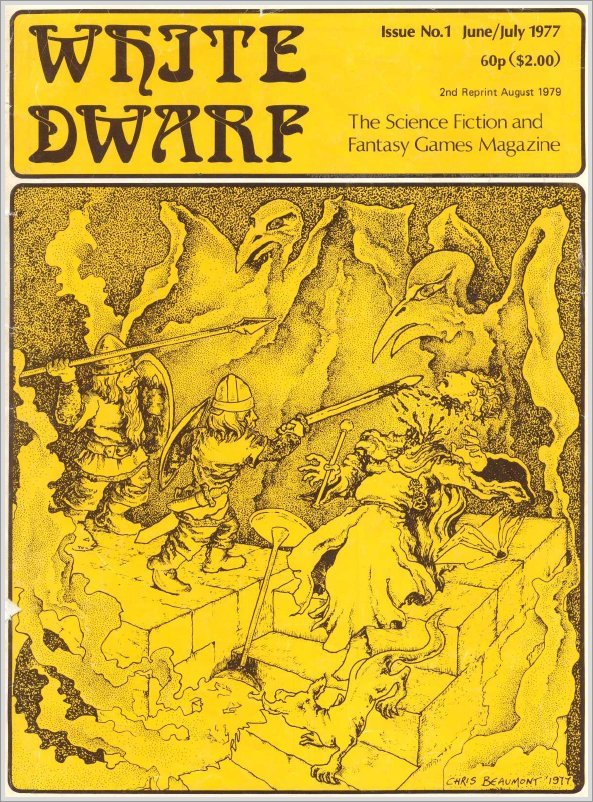 The first issue of White Dwarf magazine is short, at a scant 24 pages (including front and back covers). Hot off the heels of the Games Workshop newsletter, Owl and Weasel, the magazine evolved to become something with a wider reach. Originally published by the Pentagon Printing Group, the first issue of the magazine covers miniatures and role-playing games. On the first page, readers are introduced to an ad for Thane Tostig—the ultimate fighting man! The ad promises upcoming rules for the Tostig game (from the makers of Heroes & Horrors) and points you in the direction of Minot’s Miniature Armoury for rules and miniatures. The next page has two ads—one for Evil, Mean & Rotten, where you play as the villains and Chris Harvey’s mailing service, where one can sign up for various RPG newsletters and magazines.

We’re on page four by the time we get to the table of contents. Games Workshop co-founder Ian Livingstone welcomes the reader to the magazine, excited about the new sci-fi/fantasy war games, with a focus on D & D. He writes: “It is hoped that White Dwarf will serve as a vehicle for comments and articles on SF/F games. This is issue one. We hope you like it.”

After an odd sketch of someone throwing daggers at a two-headed person, the reader is treated to the first article—Metamorphosis Alpha! A science fiction game produced by TSR, set in the 23rd century. Players are aboard a lost spaceship, struggling for survival. The article outlines the basics of the game, a gravitational effects chart and provides detailed, helpful information for getting started with an adventure.

Next up, is the D & D Society News. A D & D club was formed on February 12, 1977, to offer low-cost services to fans of D & D. Their first meeting was on March 12. The next two pages are ads—one for Tally Ho Games, the other for The British Fantasy Society.

The feature, “The Monster Mark System” covers Don Turnball’s method of “providing a systemic method of assessing a monster’s relative malignity, so that new monsters could be assigned with reasonable accuracy to levels.” What follows is a detailed description, along with numerous formulas and examples. It’s a bit more algebra than most players are probably accustomed to these days, but it is a fascinating article, with interesting applications in context.

The “Open Box” section reviews Sorcerer, which reviewer Rob Thomaason gave a 7 and Starship Troopers, which got a 9 from reviewer Martin Easterbrook. Next, it’s time for some competitive D & D!

Fred Hemmings discusses an adventure he and his party recently played, involving a lucky break with some ogres and cowardly mummy. Of note is the D & D puzzle section on the sidebar of the page.

Next up is a fantastic article by Lewis Pulsipher, “D & D Campaigns.” In the article, Pulsipher helps DM’s understand how to get in the proper frame of mind to run a campaign, in a relatable and easy to understand manner, imparting superb wisdom to readers, “D &D is a simulation of life, a life we believe could exist but does not.” A comic—the Keeper of the Flame—wraps up the page. Toward the end of the first issue, Steve Jackson tells us all about The Warlord and we take a look at “The Treasure Chest.’

Andrew D. Holt provides his advice for how to “fix what’s wrong with D & D (the combat and magic systems)” and Steve Littlechild provides stats for a Helm of Vision item. The section on poisons contains an effect chart and ends the Treasure Chest section on a venomous note, indeed.

This issue wraps up with a classifieds and letters section, followed by a Games Workshop mini-catalogue and an amazing bit of artwork to tease issue number two. Livingstone was right—I did enjoy this issue. This White Dwarf magazine might be onto something...
Last edited by a moderator: Jun 8, 2020
Click to expand...

When he isn’t learning to play or writing about RPGs, David J. Buck can be found at Tedium: the Dull Side of the Internet, Nerdvana Media, Patreon, and Twitter.
G

This is an unexpected treat. Great to see ENWorld cover more and more of the early days of our hobby!

This is very cool, David! I'm looking forward to more!

One of my most treasured possessions is my White Dwarf #1 to #100 collection, all in their official red binders.
I go through them once a year, get all misty-eyed and nostalgic thinking back of a time when things were somehow simpler: we seemed to have more more fun with less and didn't sweat the things that seem so important these days.
Good times and memories

I love the old art here and in the old D&D works. I know it is counter intuitive in a way: higher polish and better quality should always be better, right? But there is mystery and weirdness to some of the less refined stuff in the old books and magazines.

It seemed mysterious and weird to me and still does. I can understand any claims that it is pure nostalgia but it always made me feel there was a world unfolding somewhere and when I played I was scratching the surface and peering in. Reading old Gygax modules did that for me to.

Ah well, bottom line is like these old flashbacks. I want to tap into those feelings in current gaming...sometimes I do, however briefly.

HorusZA said:
One of my most treasured possessions is my White Dwarf #1 to #100 collection, all in their official red binders.
I go through them once a year, get all misty-eyed and nostalgic thinking back of a time when things were somehow simpler: we seemed to have more more fun with less and didn't sweat the things that seem so important these days.
Good times and memories
Click to expand...


My first WD was #98 and that's one of my most nostalgia rich gaming products I have!

There was a thread a few years ago now on that Lewis Pulsipher article.

Nice! Looking forward to seeing more of these. By the time I discovered White Dwarf, it had already become an in-house Warhammer magazine only.

That's a shockingly violent and gory cover for a first issue. Heck for any issue.

This is cool. As a young gamer I'd heard of White Dwarf, but only as a mythical unicorn as most things from the UK were int he days before publication of the Fiend Folio and UK series of modules.

Excellent. Now all I need is for someone to do a series on the Journal of the Travellers' Aid Society!

I still have, tucked away safely, issues 1-12 of White Dwarf in an original WD binder. Great to see what was once (before it became a house organ) a fantastic RPG magazine get some attention and recognition.