I've gone back and updated the entire thread with the most up to date versions of my maps, as several "previous changes" were lost after the server crash. I also lost a few "revised" descriptions, but most of them can be redone.

I just discovered this thread today and have had a great time looking over your maps.

It makes me wish I have ever had any luck when I try CC or similar products - but I get too easily frustrated if I cannot just easily drag and drop off a palette of default images of mountains and forts and towns and trees, etc. . . I would also need to be able to import scanned hand drawn maps and then manipulate them in the program b/c there is no way I would be able to do that on a machine.

Anyway, it just means I have extra appreciation for the effort and skill it takes to make these. I am envious.

I just discovered this thread today and have had a great time looking over your maps.

Thanks, I work very hard on my maps. Maybe a little too hard, sometimes. Thus, I've learned to take breaks from mapping and do other things.


el-remmen said:
It makes me wish I have ever had any luck when I try CC or similar products - but I get too easily frustrated if I cannot just easily drag and drop off a palette of default images of mountains and forts and towns and trees, etc. . . I would also need to be able to import scanned hand drawn maps and then manipulate them in the program b/c there is no way I would be able to do that on a machine.

Anyway, it just means I have extra appreciation for the effort and skill it takes to make these. I am envious.
Click to expand...

Campaign Cartographer 2 Pro is the current version, although there is a CC3 coming out soon. (It might even be out already. i can't say for certain.) The program does have a high learning curve, but as long as you stick with it and learn the interface then you can create just about anything.

I started out as a hand-drawn mapper, and it is really hard to convert such maps into CC2 maps. I've never imported my hand-drawn maps. I simply had to allow for the fact that I wasn't going be able to copy them exactly. It's worked out for the best, IMO.

Okay, here's a map I created for last night's game. The homestead belonged to a half-orc ranger that the PCs were going to meet just north of the city of Mor's End. When they got there the homestead was smoldering, as it had been attacked by snow goblins, a hill giant, and a skullcrusher ogre, being lead by a worg rider/commander called Ginsig.

The PCs killed the bad guys, but the ranger was already dead by the time they found him hiding in the cellar. The did rescue his dog and a goat, however.

This first map shows an overview of the area near the homestead. I will also be posting a second, closeup version of the map shortly.

And here's the closeup. Note the areas where the various buildings are still smoking.

The Mor's End Final map looks a bit fresher since the last time I saw it (before the server crash). I found a perfect spot for it in my hoebrew so I'm spwipin' the map.

Love all your work so far Knightfall. The revised Ahamudian maps looks wonderful.

Here's another closeup map for Mor's End of the Eastern District, which isn't a real district, just the eastern half of the northern part of the city. 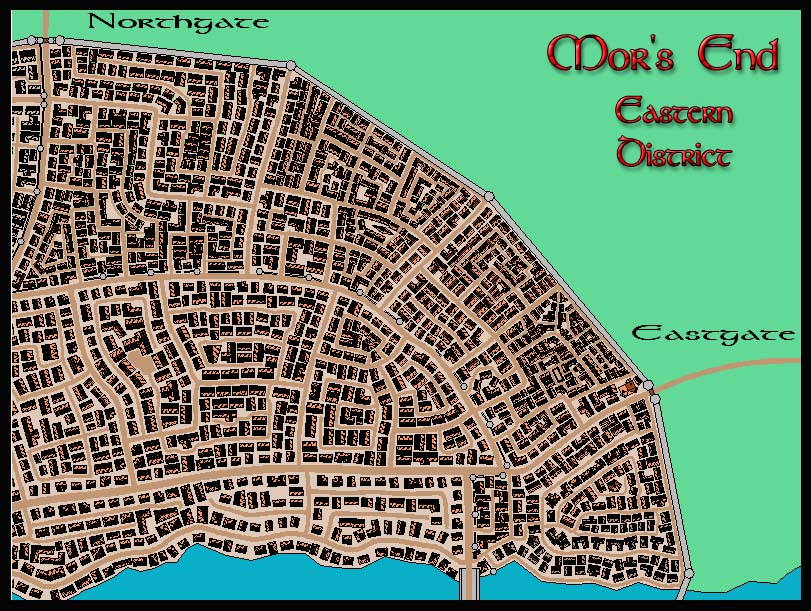 Knightfall1972 said:
Glad you like it. Lord knows it took FOREVER for me to make it. Here's another closeup map of the Eastern District, which isn't a real district, just the eastern half of the northern part of the city.
Click to expand...

A question for you: Would you happen to have a single map that compines the Eastern & Wetern Ahamudian Region? I tried splicing the two together, but it isn't marrying up right.


The land now known as the Kingdom of Ahamudia was "duplicated" on Harqual during the Month of Thorn of 749 N.C. The citzens of Ahamudia are still struggling to survive on the World of Kulan and to make matters worse, many of their fellow citizens weren't "duplicated" during The Transfromation.

The Javeldians (as the citizens of Ahamudia often call themselves) come from a dark world called Maran, where evil rules almost everywhere. On that world, their goodly kingdom was known as Javeldos. Those Javeldians not "duplicated" on Kulan soon realized something awful had happened as their fellows simply vanished overnight. This mass teleport-like effect included members of the Royal House of Javeldos including the King and Queen. (Only their youngest son was left behind to defend the kingdom from its enemies.)

The citizenry of Ahamudia is made up of not only humans, but also unique races of elves, gnomes, and dwarves. The dwarves and gnomes of the Rilous Mountains collectively call themselves the Bitran while the elves refer to themselves as the Aphranæn. These demihumans are considered full citizens of the Kingdom of Ahamudia; although, they prefer to remain isolated. However, they have quickly endeared themselves to the elves of the Great Forest and the dwarves of the Greystone Mountains.

The City of Eberel is the transplanted kingdom's capital city, while the City of Halonnan is named after the "new" King. (The old king and most of his family returned to Javeldos on Maran to help rebuild that kingdom.) King Loghan Halonnan [NG male human, cleric 10/sentinel 5 (Cronn)] is married to the old King's daughter, and he has become very popular amongst the "people" of the Ragik Peninsula, due to his involvement in the war that saw the death of the last Sword Emperor.

Hutaalar is home to a reclusive race of jackel-headed humanoids known as Hutaakans. This race is also from Maran; although, the Javeldians weren't aware of their presence in the mountain range until the Hutaakans revealed themselves after the war with the Empire of Swords, which is a matter of contention amongst the citizens of Ahamudia.

Bitran is the capital of the dwarf/gnome domain of the same name. The Bitran consider themselves independent from the Kingdom of Ahamudia but the truth is that the two lands are such close allies that the Domain of Bitran is considered a vassal state to the forested kingdom, especially since the transference to Kulan. The Gnome-King of the Bitran, Kaergaer Herljanvar (LN male gnome (Bitran), fighter 8), is even considering formalizing such a vassalage and changing his title to "Prince."

See these two threads for a more detailed look at Ahamuda... 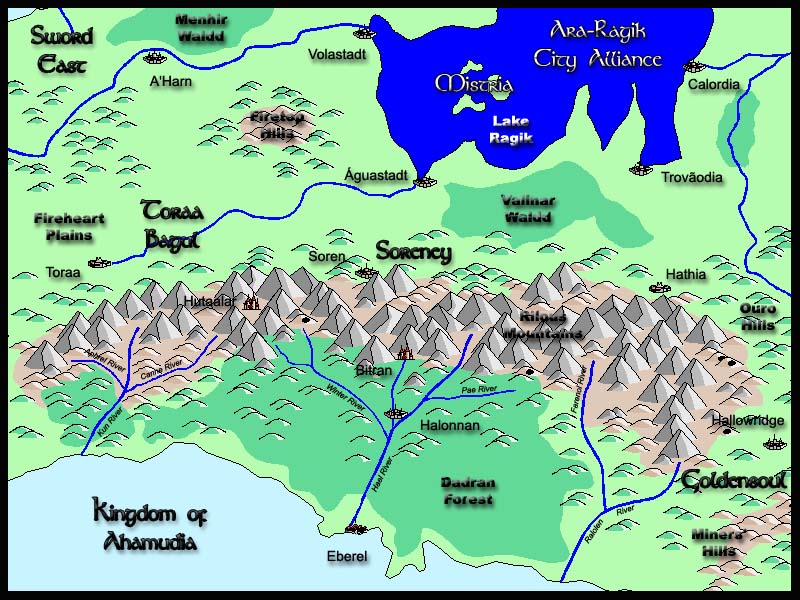 Okay, I believe this is one of the maps that got wiped out by the server crash. This version has a little more detail on it then the last time I posted it. Specifically, the City of Dragonhold was left off the previous version of this map, and so was the City of Reth. 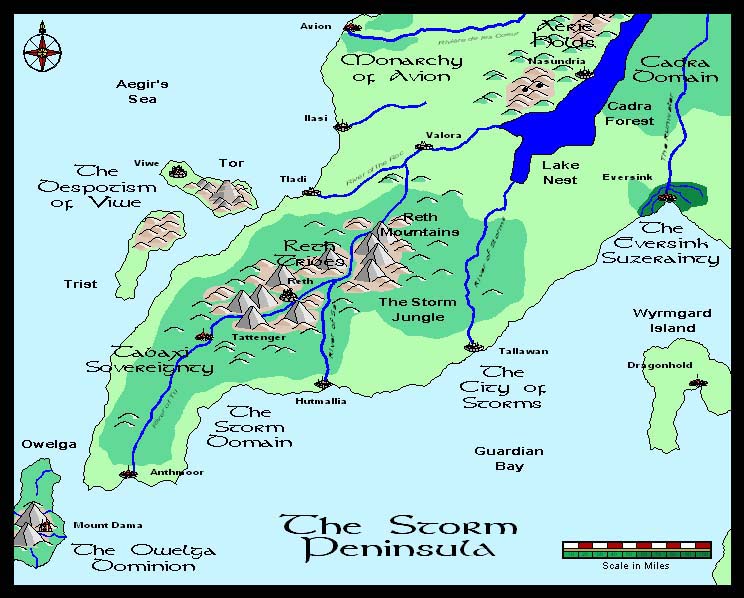 Knightfall1972 said:
BTW, Fru, if you didn't already know, the Kingdom of Ahamudia is basically the Kingdom of Karameikos, from the Mystara setting, with all the names changed, and modified to fit into the whole Transformation concept for Lands of Harqual.
Click to expand...

I've got the Karameikos boxed set. I picked up some of the familiar spots right away.

I believe this is a repost of this map, but I'm not 100% sure. I having some difficulty remembering what was posted here before the crash happened.

Anyway, this regions is one of the maps done at a closer scale then most of my Harqual maps. That's mainly due to the fact that THE MIDLANDS isn't a very large region. After all, the capital of the region is the Town of Shard.

In fact, the Midlands is such a small region it doesn't even dominate the map. This map shows the northern half of the Verdalf Forest, as well as most of the Barony of Calot. The capital of Calot is the town known as Calotown.

The citizens of Calot and the Midlands sort of have a love-hate relationship. In the past, the two lands were often at odds over farming territory and fishing rights, but now that The Knotwood is full of fiends, the Midlands is all that stands between Calot and destruction.

As a result, they now work together to hold the fiends and blood elves at bay, which isn't easy, to say the least. Verdalf has had its own problems with the blood elves of the Knotwood, but the hunter elves have numbers on their side, including many forest elves that fled the Knotwood when the magical disaster happened that transformed the Knotwood.

Another major player in the region is an unknown, evil druid/sorcerer that lives just north of the Midlands within the boundaries of the Knotwood. This evil human is said to be in league with the blood elves, but Uthather Tower has stood in this region for nearly a century. 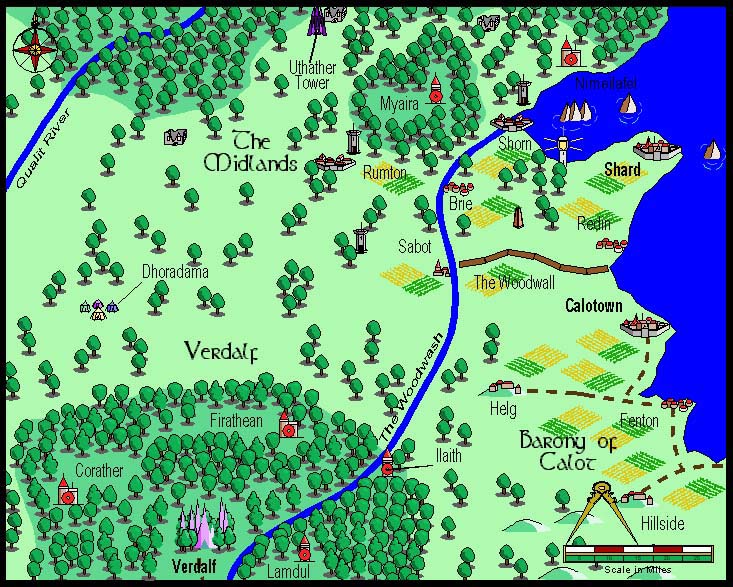 Nice map. I am interested in knowing more about the Woodwall.

THE WOODWALL is the dividing line between The Midlands and the Barony of Calot. the two lands have fought over territory rights on this spot, dozens of times. Now, it used by both lands as a place to fall back to if hard pressed by blood elves, demons, or worse, from The Knotwood. (Note that many of the non-fortified communities of both lands are usually abandoned when a major attack occurs. These communities are rebuilt later.)

It is basically a large wall of spiked logs that juts out of the ground. The spiked logs are full trees that are half buried in the ground. These tree logs are hardly uniform in which directions they face. A hill has built up around the trees of the Woodwall, which means this ground is higher than most of the rest of surrounding farmland. A series of interconnected wood planks and stone slabs zigzags through the Woodwall, which is a bit confusing to those that don't understand how the structure was built.

The tree logs useds were either purchased from the hunter elves (deadfall) or poached from the outer reaches of the Knotwood, in ages past. The logs are treated with an alchemical substance that offers them protection from normal fire. Magical fire can cause them to burn, and many of the logs are scorched. The Woodwall is effective mainly against calvary and giants, although the steepness of the slope offers protection from humanoid attacks, as well.

Neat idea. I'm going to have to use it.