Xanathar's Guide To Everything Reviewed

As the first actual rules expansion of 5th Edition Dungeons & Dragons, Xanathar's Guide to Everything (XGtE) is facing an immense amount of scrutiny, guaranteeing that it won't please everyone. That said, there's a lot there for fans to like. 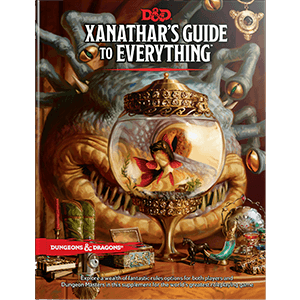 Who will like XGtE:
Who might be disappointed by XGtE:
The last point wasn't going to happen. Dungeons & Dragons 5th Edition unabashedly embraces a more streamlined approach than the 3x and 4th Edition rule sets, but a segment of its audience keeps hoping for more complexity. As for the other two issues, Mike Mearls and company keep talking about updating classics like Greyhawk, Eberron, etc. so while their panel at Game Hole Con referenced to upcoming classes, it makes sense that they're not in XGtE.

XGtE's introduction clearly states that it's intended to build on the Player's Handbook and Dungeon Master's Guide without being a fourth “core book.” In fact, “enhancing fun” could be considered the hallmark for XGtE, not a rules expansion.

As with other 5th Edition products, XGtE reminds readers that the DM's role is to adjudicate the rules and reinforces that concept a few times in the book. It also starts with ten rules to remember, based on comments and questions they frequently receive.

Regular readers of Wizards of the Coast's web site will recognize large parts of the material in XGtE, though that's an advantage in many ways. The subclasses were predominantly tested via Unearthed Arcana presentations and surveys. The versions in XGtE have enough modifications from the original submissions to show that feedback did make a difference. This is totally in keeping with the development team's caution and intention to make 5th Edition last 10 years.

As a big fan of both Battle Clerics and War Mages, I was happy to see the latter's addition, though somewhat disappointed in the execution. While it's clear they don't want a wizard to overshadow their companions' battle prowess, I expected a bit more tactical magic. The Tactical Wit ability that allows a mage to add their Intelligence modifier to Initiative Rolls is a significant bonus, and the Power Surge ability could be quite useful. The AC and saving throw bonuses of the other abilities, however, feel both boring and not significant enough for their required levels.

Each class begins with a description intended to take you deeper into the role of that class and its purpose. Then there are a series of subcategories intended to enrich your character's background and goals. For example, it's suggested that Barbarians might have a personal totem, tattoo and/or a superstition. Clerics are asked to think about the temple at which they trained and what secret they might be keeping. Sorcerers might have a special effect that happens when they cast spells, and so on.

These options are intended to be prods, not exhaustive answers with the accompanying charts only providing six answers that can be selected randomly or used as guidelines to create your own. I do wish they provided eight or ten options instead. Still, for players and DMs who like to focus on role playing, these sections and the “This Is Your Life” section on ideas to enhance character backgrounds, both are very good additions.

The cavalier and samurai subclasses come with a note that says neither is meant to be a depiction of historical figures. The inspiration for both comes from folklore and pop culture, not the real world.

The Way of the Drunken Master monk subclass deviates from Pathfinder's concept in the Advanced Player's Guide. The XGtE version uses erratic movements inspired by drunkards to misdirect opponents. The Pathfinder version actually uses the character's alcohol consumption to increase ki or temporary hit points. Both are valid interpretations of the concept, but XGtE one is more user friendly at game tables that might include children or those who have overcome addictions.

The Racial Feats are fine. Unlike class options, I doubt that anyone is going to select a race based how cool a racial feat is, but they add some nice options.

This DM appreciates the Encounter Building section. Having 23 pages of random encounter tables broken down by environment and level is a time saver and a big help for busy DMs. The expanded advice on how to create encounters is useful for new and experienced DMs alike. The section on adding flavor through a monster's personality and relationships is yet another way XGtE enhances role-playing opportunities.

Similarly, the magic item section improves upon the DMG by clearly categorizing the rarity of items. It also adds a section for minor magic items that can be used as is or as inspiration for your own creations. Minor magics like a cape that billows dramatically or a tankard that prevents drunkenness adds flavor to campaigns players tend to love.

Chapter 3 focuses on spells with wizards and sorcerers getting the most and, somewhat surprisingly, clerics only getting seven, two of which are cantrips. About half of the spells are from Princes of the Apocalypse. The advantage to incorporating this previously released material, along with subclasses like the Mastermind and the Swashbuckler from Sword Coast Adventurer's Guide, is that it helps D&D Adventurers League players adhere to the “PHB +1” rule by consolidating a lot of material, though SCAG has other class options that were not carried over to XGtE.

However, if you want to play a subclass from XGtE or use its spells you can't then play a race from Volo's Guide to Monsters and vice versa in an Adventurers League game. Homebrew campaigns, of course, are up to the DM's preference.

All in all, XGtE is perfectly in keeping with the development team's philosophy of thoughtful additions to 5th Edition rather than besieging fans with material that may or may not hold up over time. The book is very pretty with Art Deco-inspired page borders and artwork that evokes a complete world of interesting characters rather than generic tropes. The notes from Xanathar himself are generally amusing and add flavor much like the now-beloved disclaimers at the start of each 5E book.

My main two complaints are ones repeated in all 5E releases so far. First, when referencing other material they only cite the section, not the page number. While that eliminates indexing errors, it's also inconvenient for DMs checking something quickly. Second, page numbers and footers are printed in gray ink that is often hard to read against the page background. Black ink would be easier for a variety of vision issues, including aging eyes and forgotten glasses.

Xanathar's Guide to Everything is a good addition to the game. The relatively slim volume holds a lot of meat for players and DMs who want more than a hack-and-slay campaign while also providing options fans of the latter will embrace. It was worth the wait.

For more information on Xanathar's Guide to Everything, see my follow-up review.

Thanks for the review! This does have a few nice options that I'm interested in trying. They did a good job with the product-related videos on D&D Beyond to get me excited.

Good review! That said, I don't think the comparison to Pathfinder was necessary; the drunken master character concept has older roots at the game table than PF's take on it.

The only real complaint I have with this book is pretty unfair: I wish they had updated the SCAG subclasses so they wouldn't be as terrible, some of them are fine though. Mastermind and storm sorc are rather bad.

Man, I feel like 5E was the Edition made just for me, and it keeps holding to that. I'm really looking forward to getting this one.

Thanks Mearls & Team (if you read this) for bringing this AD&D/OSR gamer back to the fold. Great job.

I second the old eyes point.

"The relatively slim volume" is a little bit of an understatement. I was able to read the entire book in one setting.

Unfortunately it was everything I didn't want, though I knew it was never going to be AD&D for 5e but hope is now dashed for all eternity. Alas!

Well done Beth. Very useful, for those of us who both do and do not find XgtE to be what we want(ed).

my main complaint is reprinted content from other books.

btw I am reading it on D&D Beyond and I like the popups when you highlight keywords. pretty cool hyperlink type stuff

My only complaint is the reprinted sub classes. Now that I understand the AL standards I get why but really dislike it. Other than that, best book outside of the core three. My group has already had a blast with all of the "this is your life" content.
Our favorite is our barbarian who's superstition is that when an elf looks you in the eyes they're trying to read your thoughts. He ended up being married twice and randomly rolled elf for both his wives.

So, I have two questions:

1: Does it reprint green flame blade and booming blade? (I may have the names slightly off). These two cantrips are essential for playing a "gish" and it's a shame they weren't in the PHB. It would be nice if they were here.

2: It's Xanathar's guide to everything but... how much Xanathar is there in there?

Ancalagon said:
So, I have two questions:

1: Does it reprint green flame blade and booming blade? (I may have the names slightly off). These two cantrips are essential for playing a "gish" and it's a shame they weren't in the PHB. It would be nice if they were here.

They are noticeably not there.

2: It's Xanathar's guide to everything but... how much Xanathar is there in there?
Click to expand...


He gets a blurb box on most subjects.

Leatherhead said:
They are noticeably not there.
Click to expand...

He gets a blurb box on most subjects.
Click to expand...

Most of his comments are pretty funny. And to be fair, he’s not the really famous Xanathar, so it makes sense for him to be a bit comedic.

Nice review! I am looking forward to buy this !

Iry said:
Most of his comments are pretty funny. And to be fair, he’s not the really famous Xanathar,
Click to expand...


Would you say that to his face?!?

I found the Xanathar's comments to be pretty useless, to be honest. Neither interesting or amusing.


Spookyboots said:
Our favorite is our barbarian who's superstition is that when an elf looks you in the eyes they're trying to read your thoughts. He ended up being married twice and randomly rolled elf for both his wives.
Click to expand...


That's wonderful stuff. I love it.

B
Review Roundup: Tasha's Cauldron of Everything
2 3 4 5