Every fight is different, whether that be due to the participants, the weapons, the location, or even the weather. A sudden gust of wind or ground tremor, a wandering monster attracted by the commotion, or even a previously undiscovered trap - all these things can swing the tide of an encounter. Fate and fortune, after all, are as much part of battle as are skill and planning. This article introduces battlefield events - random events which can happen on the battlefield, affecting the combatants or the environment. Battlefield events add an additional element of randomness into a battle. 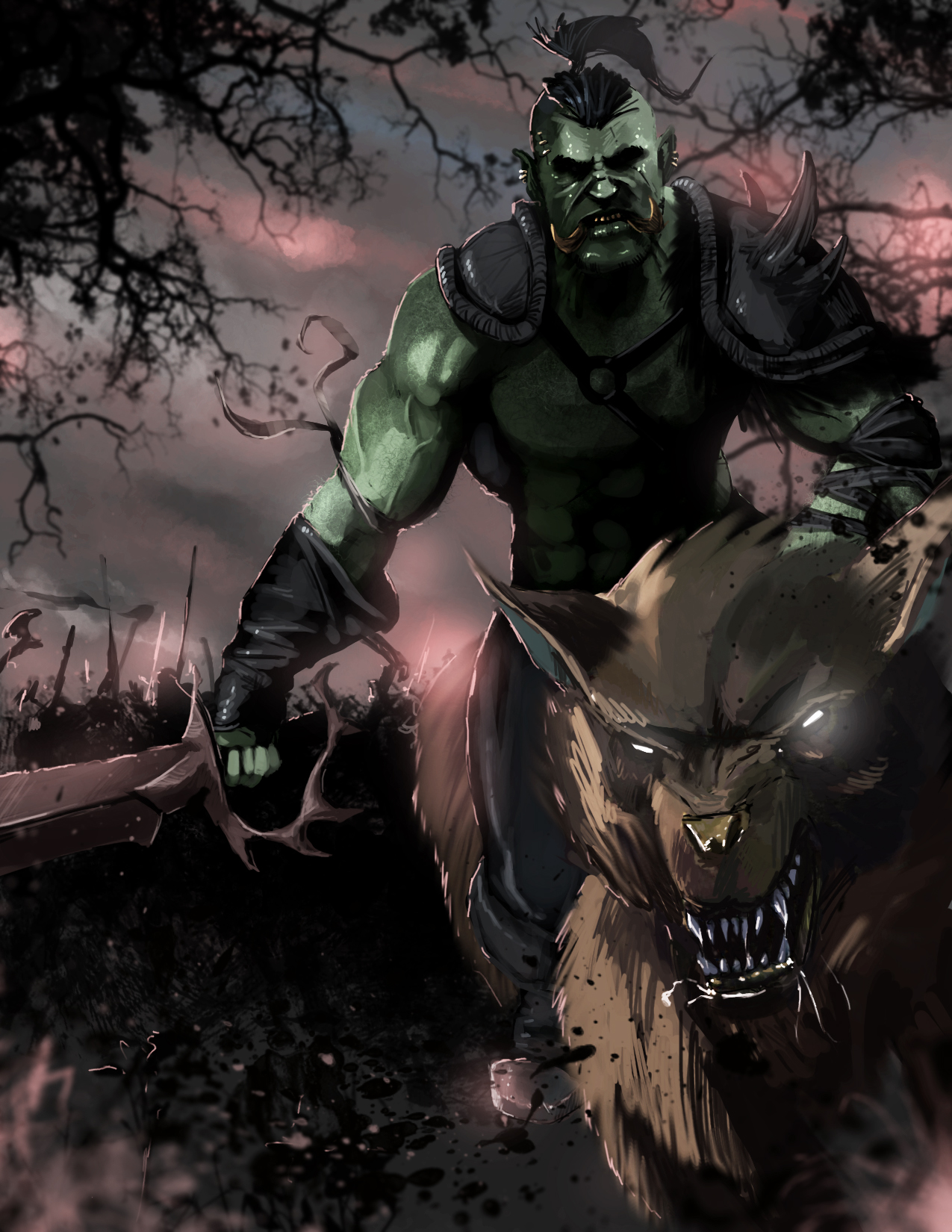 ​
Battlefield events are easy to implement during a combat encounter. At the beginning of every round, simply roll 1d20. On a roll of 20, a battlefield event takes place. Roll 1d20 on the table below to determine the event (or the GM may choose one).

1. Gust of Wind
A strong gust of wind suddenly blows across the battlefield. The force of the gust automatically extinguishes candles, torches, and similar unprotected flames. It causes protected flames, such as those of lanterns, to dance wildly and has a 50% chance to extinguish those lights. Ranged attack rolls and non-magical flight are not affected, because the gust is too brief. In addition to the effects noted, a gust of wind can do anything that a sudden blast of wind would be expected to do. It can create a stinging spray of sand or dust, fan a large fire, overturn delicate awnings or hangings, heel over a small boat, and blow gases or vapors to the edge of its range.

2. Visibility
An environmental effect limits visibility. The cause of this depends on the location — it may be the closing of a window or door, clouds obscuring moonlight, a sudden heavy fog or sandstorm, or the failure of magical lighting. Depending on the reason chosen, creatures with darkvision may still be able to see. Those who cannot see are considered blinded. The effect persists for one round.

3. Innocent
An innocent party unwittingly enters the battlefield. This could cause a hostage situation, or prompt good characters to protect the new arrival. The innocent will be vulnerable (low level, young, etc.).

4. Tremor
A minor earth tremor forces all combatants on the ground to make a DC 15 Dexterity save or fall prone.

5. Weather
It begins to rain or sleet heavily (depending on the environment). The weather lightly obscures vision, and all creatures on the battlefield suffer disadvantage on sight-based Wisdom (Perception) checks; if the weather is rain, this also applies to hearing-based checks. The weather extinguishes open flames. In the case of sleet, the ground becomes slippery for the rest of the encounter, requiring all creatures to succeed on a DC 10 Dexterity (Acrobatics) check to avoid falling prone the first time they attempt to move on it.

6. Monster
A random monster, attracted by the sounds of battle, enters the battlefield, attacking combatants at random. The monster(s) are selected by the GM and should be of a challenge rating equal to half the party's level.

7. Touch of Favor
Whether due to luck or to divine favor, one random combatant gains advantage on his next attack roll and automatically scores a critical hit if the attack roll is successful. Every combatant must roll 1d20, with the highest rolling combatant gaining this benefit. If there is a tie, all combatants in the tie gain the benefit.

8. Collapse
There is a major structural failure nearby. If outside, a 30-foot-tall tree falls in a random direction, affecting a 5-foot-wide, 30-foot-long area. If inside, the ceiling collapses at a random location in a 15-foot-wide radius bury zone. Those under the falling items take 22 (4d10) bludgeoning damage (or half that with a DC 15 Dexterity save). The area underneath the collapsed section then becomes filled with rubble, and is treated as difficult terrain.

9. Pit
A 10-foot radius section of flooring or ground gives way. Those on the area may make a DC 15 Dexterity save to avoid falling in. Those who fall in take 4d6 bludgeoning damage (2d6 falling damage and 2d6 from debris), and are now prone in a 30-foot hole.

11. Extreme Favor
For this round only, critical hits are scored on a natural die roll of 19 or 20, and rolls of 1 do not mean an automatic miss.

12. Vermin
The battle disturbs some small vermin living in the area. A swarm of insects, rats, or other appropriate vermin appears in a random location and begins to move randomly across the battlefield 1d6×5 feet in a random direction each round. Rats cause difficult terrain in a 10'x10' area; insects or bats cause disadvantage on ranged attacks and Wisdom (Perception) checks in the same area.

13. Dust Devil
A small whirlwind of dust moves across the battlefield randomly. A 10-foot × 10-foot area defines the dust cloud, and it moves 1d6×5 feet in a random direction each round. Those caught in the cloud must make a DC 12 C onstitution save or be blinded for 1 round.

14. Arcane Flash
A burst of random residual spell energy, perhaps left by a long dead archmage or deity, causes magical powers to fluctuate. The next spell cast by any combatant on the battlefield automatically creates a Wild Magic Surge as per the sorcerous origin.

15. Trap
A random combatant sets off a hitherto undiscovered trap. All combatants roll 1d20; the highest rolling combatant sets the trap off. The GM selects a trap of setback severity from the core rulebooks .

16. Fumble
A random combatant fumbles. All combatants roll 1d20; the highest rolling combatant is the one who fumbles. If there is a tie, both combatants fumble. Roll 1d6 on the fumble table below. See the next page for fumble descriptions.

17. Fatigue
This battle is more grueling than most. All combatants must make a DC 15 Constitution save or gain one level of exhaustion until the end of the combat encounter.

18. I’m Getting Better!
A combatant who has been downed is not as badly injured as it appeared at first. All downed (dead or dying) combatants roll 1d20. The highest rolling combatant recovers — it was only a flesh wound! He is prone, but actually has 50% of his normal hit point total. If there is a tie, all combatants in the tie recover in this manner.

19. Fatal Mistake
A random combatant makes a dangerous mistake and receives a critical hit from the nearest opponent able to do so (either rnaged or melee). All combatants roll 1d20 — the highest rolling combatant is the one hit (both in a tie). The hit is automatic. If no combatant is in a position to hit the combatant in question, he fumbles instead (see #16, above).

20. A Really Bad Day
Roll twice on this table.

If a combatant suffers event #16 (Fumble), roll 1d6 to choose one of the following fumble events.

1. Prone. The combatant slips or trips and falls prone.
2. Disarmed. The combatant drops her weapon. If she is not holding a weapon, she drops any other item held in her hand(s). If she is not holding any items, she becomes entangled (see below) instead.
3. Entangled. The combatant gets caught up in foliage, furniture, curtains, or even his own backpack. He gains the restrained condition for one round.
4. Vulnerable. The combatant makes a tactical mistake and places herself in a vulnerable position. All attacks against her gain advantage until the beginning of her next round.
5. Disoriented. A random blow, or a moment of confusion, effectively stuns the combatant for one round.
6. Blinded. Whether from blood in his eyes, or a helm falling down over his face - perhaps even a bright light - the combatant is temporarily blinded for one round.
[FONT=&quot]Save[/FONT][FONT=&quot]Save[/FONT]​
Last edited by a moderator: Aug 7, 2019
Click to expand...

Great thing to have for 5e combats!

I have a system like this for my homebrew RPG that I based on Darkurthe Legends. However, my 'randomness' is when two opponents both roll the same number for initiative. Initiative is a dice determined by the characters size or weapon bulk to characters strength (from 1d4 up to 1d12), so there's a bit more randomness and means that small creatures or those that use small, fast, 'light' weapons (use smaller die type) tend to be more nimble and able to avoid a lot of the results (low numbers) on the table I have for it (like 'Stumble on Terrain', 'Nose to Nose', 'Equipment Fails', etc)... versus those that are big, lumbering beasts or using huge weapons with large arcs of attack (higher numbers) have slightly more 'large' results (like 'Hit Obstacle', 'Weapon Embeds Itself', 'Zigged Instead of Zagged', etc). Each 'event' has it's own little suggested modifiers for various mechanical things, like loosing ground, having to roll a worse/higher Initiative Die next round, falling prone, etc. I also have one or two results for just "One in a Million" type things to happen (like a tree falls over right between combatants).

Nice to see someone else thinking of these things!

This has really sparked some brainwaves in my head, for some reason! Thanks!!

Great table, I'll make use of this in short order.

I like it but I would make number 1 nothing happens. I also would change Touch of Favor, Extreme Favor, or Fatal Mistake out for something more battle field interruption than divine influence. Its not that they don't work, I just don't find them as interesting as for visible changes to the battle field like the fog cloud or random monster options. Just my thought.


Numbers 1-19 on the initial d20 roll are nothing happens.

Its great to have these random tables. With combat going on there can be enough things to think about. So having resources like these can be a great way to add some variety while tak9ng the mental load off a bit.

Also when i dm, i like to be surprised sometimes too. Makes me feel like a player

In my games, start of every session i have each player deal me a card face down. I use them to flavor the scenes and and draw random elements from.

It also means when drawing up scenes, locations, etc I include some "card" items in the mix.

Hearts is for compassion or help opportunities.

Clubs is for active combat threats and opportunities.

Spades is for environmentaldangers, risks and opportunities.

21) Somebody's spilled blood / entrails / whatever causes the square where he was killed* / injured** to become slippery. Treat as if Grease was cast, centered on that square.

* if available, preferred
** preferring a square where the target suffered a critical hit, if available

This is a fun idea. I was thinking something similar recently, but along the "when initiative matches" lines like pmming.

I would probably have a default table with a slightly less exotic set of options, like ClaytonCross suggested, and then a tailored table for exotic and specific locales. For example, latent spell bursts might make sense in the Blood Marshes ancient battlefields, but not so much on the side of some snowy Lonely Mountain somewhere; "Avalanche" is falling all over itself to be used instead! ;-)

Morrus said:
Numbers 1-19 on the initial d20 roll are nothing happens.
Click to expand...


I get that, I just like the idea that a failed success equates to nothing but I can see not bothering if you don't like it.

D&D 5E Climbing and fighting on a mountain side
2