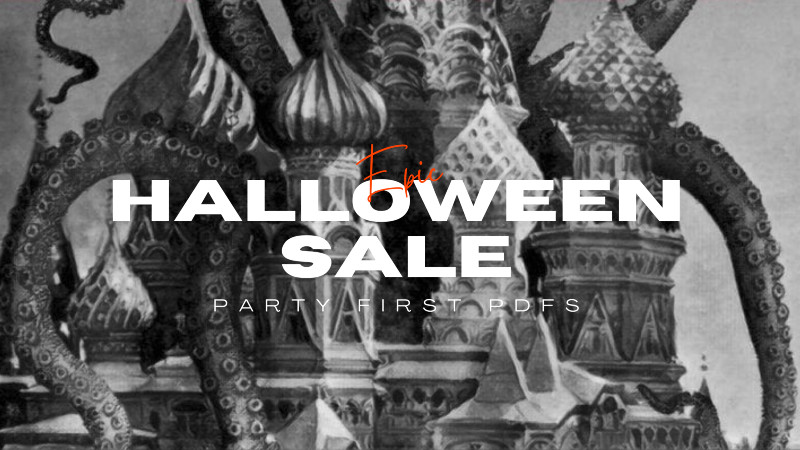 50% OFF
It's spooky season and we here at Gamenomicon would like to help you provide chills and thrills to yourselves and your players. To that end, all PDF products for our pulp horror alt history game, Party First, are 50% off for the rest of the month. Jump in and check out these great titles.

Party First:
The core book in the line explores the alternate 1980s of the Twilight World where the supernatural is real. Players establish themselves as citizens of the communist USRA and must overcome not only things that go bump in the night, but also a Party bureaucracy that may be just as dangerous.

Twilight Sites:
Our first expansion, Twilight Sites details several locations of secret programs, experimental accidents and more that the Party does not want you to know the truth about.

The Butcher, The Baker, and the Drekavac Maker:
In our first new adventure, players will explore the sleepy hamlet of Proshi and discover that even rural USRA may be hiding unsettling horrors just beneath the surface.

Survive - Tundra:
The Tundra sourcebook adds new rules and systems for exploring and surviving in some of the most forbidding terrain in all of the continent spanning USRA. Also includes a new class, enemies, and adventure prompts.

Lady Death:
Even a simple train ride in the Twilight World becomes not so simple when the train breaks down. Can the players survive the bleak terrain and uncover the secrets of the train before the succumb? Optionally uses rules from Survive - Tundra.

Buy on Drive Thru RPG
Buy on Indie Press Revolution

Coming Coming Soon: A Respite From the Heat