It seems that the initial sales of D&D 5th Edition are very strong. Asked about how they compare to 3E and 4E, WotC's Mike Mearls says that "Raw numbers are stronger, but that's not the complete picture. end of year 1 is the key." The Player's Handbook has now topped the hardcover nonfiction sellers list at Publishers Weekly. As of right now, it's #1 in Fantasy Gaming at Amazon, and a week ago it was the #1 book on Amazon! 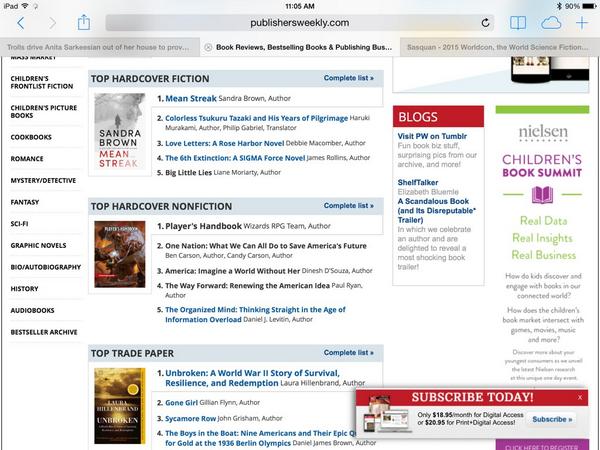 In other news, prompted by some discussion about the gaps between D&D edition releases, I whipped up this quick info-graphic showing the dates that each edition was released. [threadcm]http://www.enworld.org/forum/showthread.php?359004-So-I-have-been-out-of-town-for-a-few-weeks-did-I-miss-something[/threadcm] 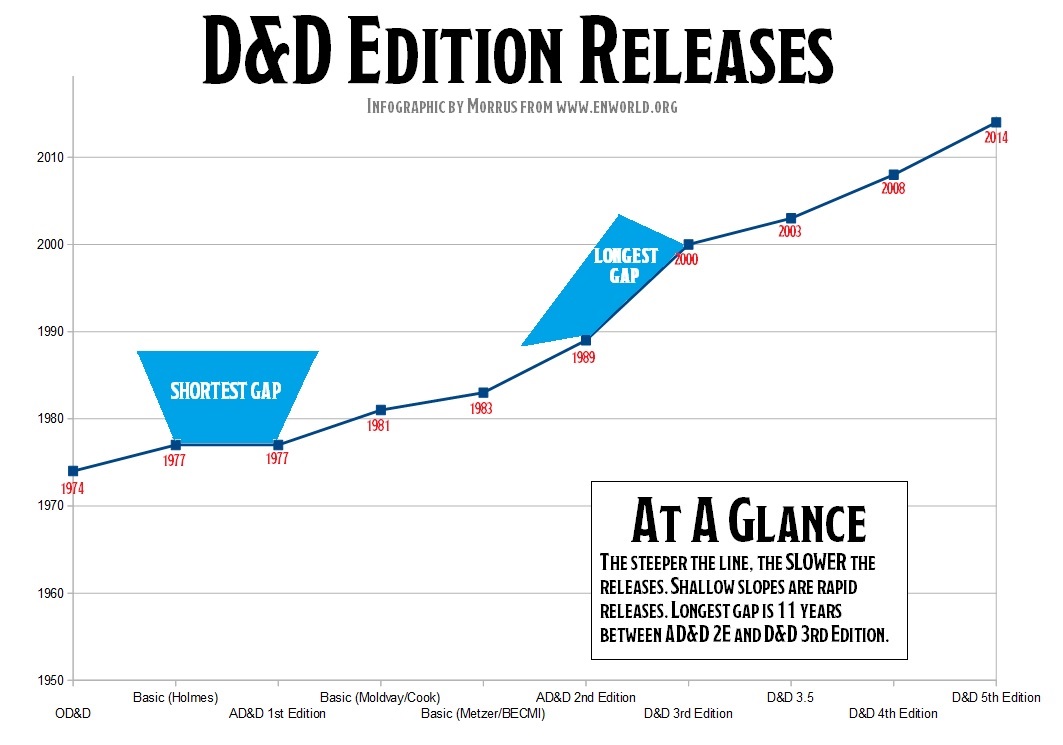 I guess we'll see if this is the start of a decline, if it will hold at a lower position for a while, or if word of mouth will boost sales again.

Zardnaar first off please excuse me if I missed the sarcasm tags in your post. Provided that you were being serious I did want to focus on the one point that you brought up that at least looks testable, and that is GenCon play numbers.


Zardnaar said:
We also know more people were playing Pathfinder at GenCOn during a launch event for a convention D&D invented.
Click to expand...

5e sold out almost all of their slots and had a very small number of total events. The issue, if there was one, was with supply not with demand.

ThirdWizard said:
Scrabble tournaments can be super competitive. Unfortunately for me, my spelling is attroshus.
Click to expand...

Impressive to be number one on Amazon; I wonder though if it can keep selling after the initial rush.

darjr said:
I do think the amazon numbers are incredible for the PHB.

Though I must admit online interaction is way different than it was in 2000. I talk to my great aunt via facebook. I would never ever have done that via usenet. Nor, my gosh, fidonet, never.

Anyway Ryan Dancy in Morrus' Interview stated that the 2nd edition phb sold 280,000 copies in the year of transition from 1st ed. I wonder how many copies they sold of the 1e phb during that same year.

It's at about 28:00 in here https://www.youtube.com/watch?v=ZXLBBp3YDro

So, is there anyway we can tell if the first month of 5e PHB's got close to or better than that? I think we can find out if we dig, and I'd bet that it crushed that number, just a hunch, a guess.

Don't need exact numbers, a good swag should give us a decent idea.

The reason I said Mike was not clear was he claimed each edition sold more than the one before it yet 3rd ed is referred to the silver age of D&D with around 1981-1983 being the golden age. He did also say initial sales do not matter to much as modern D&D it seems is heavily frontloaded to the 1st few months, TSR era was a slow burner as such with smaller print runs sold over a longer time frame.
Last edited by a moderator: Sep 24, 2014

Is the PHB out of stock at Amazon?

aramis erak said:
People WERE talking about 3E on the internet in 1999. In several venues. ISTR Kenzer & co having their forums up by then, And RPGNet was rolling. (1996). The Forge was newly up, but promptly denigrated all things d20.

And the mailing lists for a number of game systems were talking about it. There was a LOT of chatter online. It looked very different due to different media, but it was there.

Its a slight difference of scale. I'm willing to bet you will find more positive reviews on the latest Game of Thrones book than Shakespeare or the bible as well.

Sailor Moon said:
I would call it BS to be honest.
Click to expand...

You would, except that wouldn't be particularly civil of you to repeatedly suggest someone was lying. And EN World's Rule #1 is "Keep it civil."

So you would, but you'll refrain from doing so, right? (Rhetorical question)

If you think someone is saying something that isn't accurate, there are loads of more diplomatic ways to put it. Please find one of them, in the future.

there is also this

Honestly, our knowledge of the numbers on any edition are fairly nebulous.

Sure, all this thread shows is that the phb is selling about as well as any book can at early release.

I dont think an rpg book has done that in recent decades. Or come remotely close. For example, see

So, its the best selling rpg book out of the gate in decades. Could mean "nothing" if you dont care its best selling. But then this whole thread would probably not be of interest to you.

fjw70 said:
The PH is still available at Amazon.
Click to expand...

Correction... The PHB is back in stock again. It was unavailable for a couple of days.

TerraDave said:
there is also this

Still hanging in there...

D&D still covers the top 5 in fantasy gaming and the PHB is the 8th most wished for book.

GrumpyGamer said:
Zardnaar first off please excuse me if I missed the sarcasm tags in your post. Provided that you were being serious I did want to focus on the one point that you brought up that at least looks testable, and that is GenCon play numbers.

5e sold out almost all of their slots and had a very small number of total events. The issue, if there was one, was with supply not with demand.
Click to expand...

I have never claimed 5E has had a bad launch, form the look of it it has been a good one. The only thig I am claiming is using Amazon reviews to claim 5E is doing better than 3E for example is idiotic.

PC use has more or less doubled or tripled in most countries since 2000. Using that logic all things being relative 5E would need to have 2-3 times the reviews of 3E just to be in the same ball park. If they have sold more than 3.0 at 300k in the 1st month that is impressive but we don't know what the actual figures are. Going by the price of the PHB I supsect it is a smaller print run than 3.0 as the huge print run for 3.0 was what let them sell the book at $20 on release or $30 bucks these days instead of $50. If they have been selling 5E at 3.0 numbers with that higher price tag ka ching for WoTC.

And its still there! Eat that scrabble.

darius0 said:
This is the best I can find. The PHB 3.0 was featured on the main page apparently a few days after reviews start appearing in Amazon's records.

Whoah, wait a minute. I think you buried the lede here: 3e was "fiction" but 5e is "nonfiction." This time we get to use real magic!

If only Jack Chick knew how right he was...

I'm sorry but trying to compare online services and usage from 2000 to now is absolutely ludicrous and makes me want to tell them to please educate themselves. Amazon was not selling back then like they are now because the populace didn't fully trust online shopping. The online bubble wasn't about shopping on Amazon or Ebay. FLGS and big retail bookstores are where most of your RPG's were bought and saying otherwise is just flat out wrong.

Making Amazon your measuring stick for success is just grasping at straws for some kind of confirmation of victory. We will never know the answer to which one would have sold better online because you are dealing with a 14 year difference which is huge.