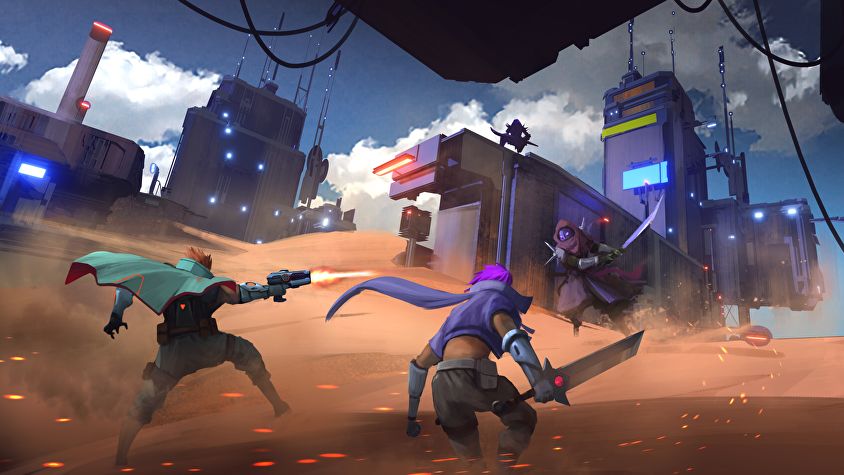 I have had to admire wargaming as a hobby from afar. I don’t have the patience to learn how to paint and I don’t have the money to invest in a ton of scenery and accessories. So I wondered why I was sent a copy of Five Parsecs From Home by Modiphius. The premise intrigued me; a solo wargame? With RPG elements? That uses the minis I already own? After reading the book and playing a scenario or two, I understand its appeal. It’s a solo/cooperative game that plays against the rules set surrounded by a massive bunch of charts that generate everything from the opponents your character faces to the story elements behind the next mission.

Characters are made as a group. There’s a lead captain with 5 other squadmates and a ship. The setting is a fairly standard one centered on a hardscrabble space crew moving from job to job trying to keep their ship and reluctant family together. There are alien variants that are recognizable from other more popular settings which makes this game easily portable to something like Firefly, Guardians of the Galaxy and, of course, Star Wars.

There’s no ship-to-ship combat included in this rules set, but it’s included to help generate missions and offer one of several places where succeeding or failing in a mission can have consequences. Perhaps a rival ambushes you in the docking bay and damages your ship. Perhaps you suffer a mishap and crash land, forced to fight off aliens while you make repairs. This is one example of a key feature that I love about this game: your battles have consequences. You don’t just pick up your pieces and fight again next week.

Five Parsecs From Home frames the game as a narrative experience and that resonated with me. Sure, there’s the part where you set up the map, make pew pew pew noises and see who lives and who dies, but the game also has phases that set up what happens before and after that. The phase before the skirmish lets you find a job, prepare for it, and deal with any unexpected elements, such as a Rival dropping in to complicate things.

The game plays fast and furious, not unlike Savage Worlds. Characters roll a variety of d6s based on their skills and gear hoping to hit a specific target number. Attacks resolve quickly; if a piece is hit, it’s out of the fight. The nastiness comes in the aftermath of the battle, where your characters roll to see if they survive their injuries. Characters that survive progress with better equipment and gear that’s either pried out of the hands of foes or purchased during the downtime action phase. It also determines whether the person that hired you for the job will hire you again or if anyone that you battled turns into a Rival out to get you at a later date.

The procedural charts reminded me of generating ideas for Traveller sessions. But there is also an element of 1000 Year Old Vampire or Ironsworn where the interpretation of elements is left up to you. These moments come out in acquiring Quest points, which are suggested as an overall plot arc to contrast with the job of the week format of the rest of the game. When your character generates a Quest point, the player is encouraged to think about what that means in the story. Is it a message from their long lost father figure? A piece of strange alien tech that can save the galaxy? A clue to the conspiracy behind the galactic government. There’s a small campaign included in the book, but I would have liked to see a little more guidance for players looking to add narrative flavor to these long form quests.

Otherwise, the book is written in a casual, breezy tone. This is a book written by gamers for gamers that gets its point across well. It even offers a tongue in cheek bonus for people who have purchased other games by designer Ivan Sorensen. This is the third edition of the rules set and it helped me to understand not just the concepts of the game but how to manage setting up a solid battlefield. My old Star Wars Miniatures figures have enjoyed getting out of storage because of this game. But now they can't go back until we've finally paid off that crime lord who bought us out ship.

Added to my buy list. Thanks for the review. I've been eyeing this for quite some time.
Last edited: Jul 5, 2021

MoreDice4Us is everywhere from Miniatures to tradI-RPGs to Indies to Solo-Play.

Is there any play experience not subsumed into MoreDice4Us?

Mimir, an app for assisting GMs, solo players, and players without a GM