I recently took a look at all of the components crammed into the Iron Kingdoms Unleashed Adventure Kit. Now let’s take a closer look some of the plastic figures included in the box. These plastic figures require no assembly but still capture a stunning amount of detail. The Adventure Kit includes 14 of these figures, four of which represent the adventure’s pregenerated player characters. The following information was sent along by the folks at Privateer Press. 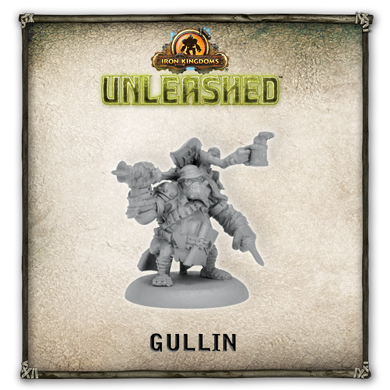 ​
Gullin is tall and burly by pygmy troll standards, his tough skin webbed with faded battle scars. He wears a worn leather great coat over his armor and a quality hat traded from a human merchant. He has a massive axe that he carries on his shoulder and numerous throwing axes hidden in his coat, on his belt, and about his person—basically everywhere. A small pyg whelp called Knuckle, spawned from a hand lopped off in a fight, typically rides on his shoulder. The whelp scampers around on his belts like a rigging rat, fetching items from the pockets on his bandolier—when it’s not getting drunk to the gills on his ale.

Gullin’s figure captures the essence of what it means to be a pyg. Size doesn’t matter; even the littlest trolls can be tough as nails. He’s outfitted himself with the trappings of civilization, from his worn leather great coat to his rakish bowler hat (the symbol of his authority within the tribe). His oversized axe emphasizes that, despite his diminutive stature, he’s as strong as they come. The drunken whelp on his shoulder adds a little humor to the model. Even a little pygmy troll can have a tiny companion, and this one comes with a mug of booze to boot. 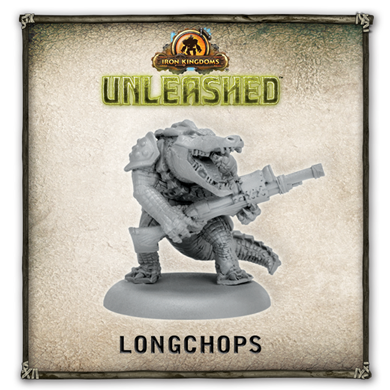 ​
Longchops is a hulking bipedal gator covered in muscles and a thick, scaly hide. He wears a jury-rigged harness across his back to carry the tools of his trade: a powerful hunting rifle and other gear useful in hunting strong, dangerous creatures.

The Longchops figure juxtaposes concepts. Here you have one of the biggest, fiercest, most frightening things you could encounter in the wild, but he’s armed with a finely crafted rifle with scope. He is a combination of savagery and technology. His massive size, powerful muscles, and rows of teeth make him a deadly opponent in close combat, but he’s a skilled marksman who is even deadlier at range. 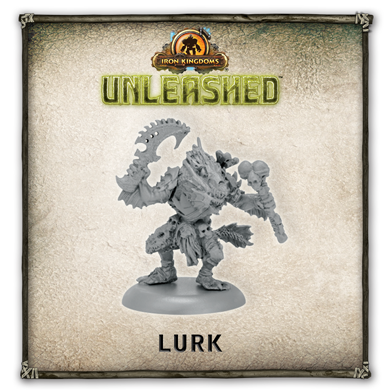 ​
Lurk is a stooped, reptilian fish-man with all manner of tattered arcane totems decorating his body. He carries a surplus of body parts, pastes from smashed organs and bones, fluids, and other harvested parts for his arcane form of alchemy as well as a few trophies from particularly interesting prey taken down in cooperation with Longchops.

Those familiar with the Iron Kingdoms have probably seen farrow bone grinders before, so we wanted to explore other races of bone grinders in Lurk’s character. He is equipped with a shaman staff to illustrate his role as a mist speaker, mystical shamans of the bog trogs, and his weapon is designed to look suitable for sawing through bones and cutting open rib cages to harvest components for his grisly bone grinding work. 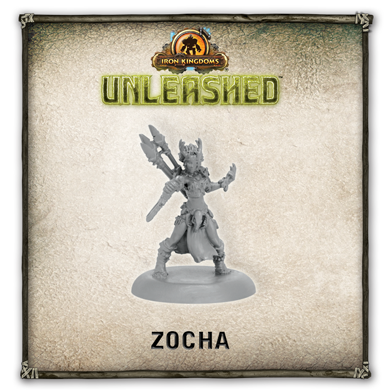 ​
Zocha is a tall and muscular female Tharn, who wears worn leathers decorated with bones of past kills and a headdress of antlers. She keeps her sacral blade close at hand, a cleft dagger intended to evoke the fangs of the Beast of All Shapes, the ancient Devourer Wurm.

Zocha is the human connection for the party, so her figure eschews a mask and wears a tribal headdress that doesn’t obscure her face to make her more relatable. Her forked dagger is a sacral blade used to perform blood magic. Sacral blades typically have a forked design to reflect the forked tongue of the Devourer Wurm her people worship. We wanted her to look human for an empathetic connection, but we also wanted her to look like a predator who has seen her share of combat.

That’s a look at the hero figures in the Iron Kingdoms Unleashed Adventure Kit, coming this March! Next week i’ll take a closer look at the plastic figures for the Adventure Kit’s adversaries, including a powerful warlord and his porcine warriors.