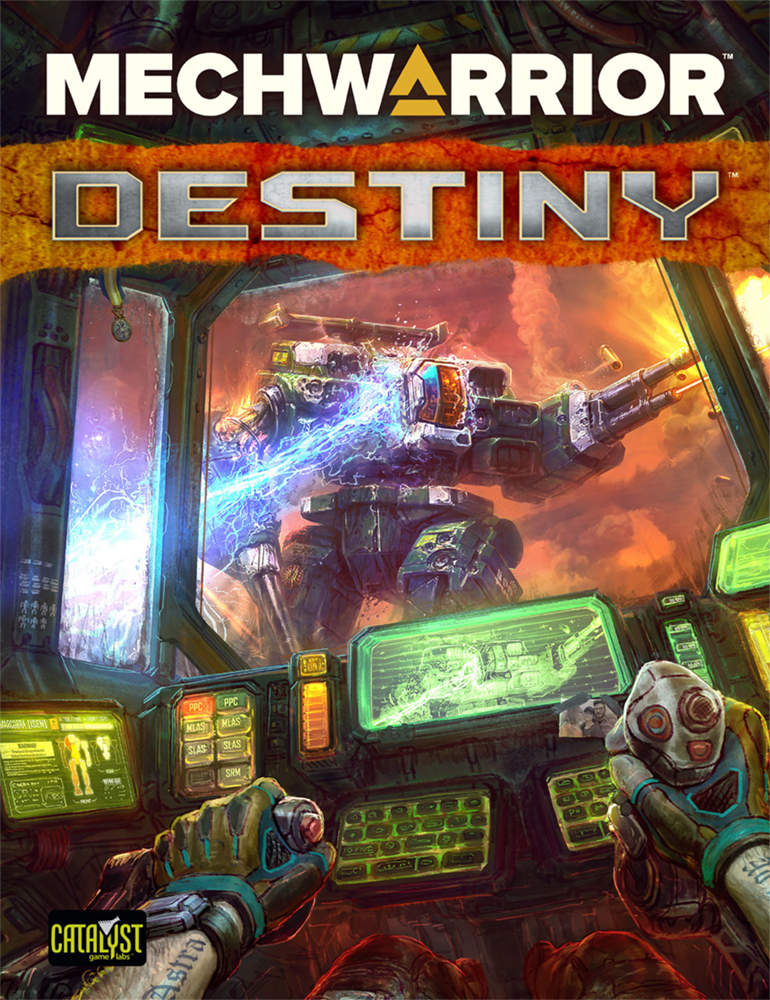 I convinced my mom to drive me and a few of my friends down to Chicago to experience a Battletech Center when I was thirteen years old. For those unaware, these were an early format of multiplayer gaming that featured multiple computers running a Mechwarrior-style 1st person perspective giant stompy robot game set in the Battletech universe. They went beyond a simple LAN party, though. They had full cockpits with readouts, toggle switches and full joystick and throttle to enhance the immersion. Later versions included celebrity warm up videos and a second game involving hovercraft racing on Mars. All in all, it stoked a love of Battletech, even if it never quite took hold the way something like Shadowrun or Vampire: The Masquerade did. The recent tactical computer game was like meeting an old friend, and I recently decided to take a chance with Mechwarrior: Destiny., their take on creating a more narrative RPG set in the universe. Did the game score a head shot? Let’s play to find out.

Mechwarrior: Destiny uses the Cue system, which has seen a few different variations across Catalyst Game Labs RPGs. It’s a narrative system at heart featuring players taking turns narrating inspired by short prompts on their character sheets or in the scene and spending Plot Points for special effects. I’ve never been into the system all that much; the cue prompts don’t have any real mechanical weight and that always struck me as an odd choice compared to games like Fate or Cortex.

But developer Phillip A. Lee does something unexpected: he welds the narrative elements onto something approaching a traditional RPG engine. The engine stays simple: stat + skill + 2d6 versus an opposed roll. Much like the Battlemechs at the center of the game, they also give the GM options to tailor the game to their group, such as offering different rules for initiative or how to set the game in a more traditional GM/player structure. I like it when core books give me options like these, but I also want the writers to pick the mainline rule and clearly mark the options. That happens in some places here, but other times these alt rules are buried in the text.

Character creation is relatively straightforward, with three levels of experience and chance to buy merits and flaws that add bonus and penalties to specific rolls in context. Admittedly, adding a bunch of plus ones and minus twos is part of how Battletech rolls, but it seems a little counterintuitive for a game that’s built for people who want a narrative framework for their military sci-fi action. Context is also key here: compared to previous entries like Mechwarrior and A Time of War, even this tiny bit of grittiness is a breeze that any good GM can figure out quickly.

Because character creation is so quick, I do wonder why the designers decided to put in over 20 sample PCs to use. I get that these games are meant to be pick-up-and-play but given that the recent Shadowrun rules set, which takes a lot more time to create characters, had ten archetypes, it seems excessive. I think that space could have been used in a much better way. The owners of Battletech should know that the mechs are the star of the show and could have given us some fine one page write ups of some of the best two legged tanks 3025 has to offer. The selection in the book is fine, and the rules for converting Battlemechs from the original game seem easy to use, but it feels like a missed opportunity to play to the strengths of the setting.

The real test of a game set in the Battletech universe is the mech combat. Make it too light and it doesn’t feel right but make it too heavy and players will wonder why they aren’t just playing the original game. Mechwarrior: Destiny threads the needle here by providing a few options. The game simplifies the mech combat while keeping the stuff that makes it unique like hit locations, heat and the joy of critical hits. It also offers rules on how to combine Destiny characters with the two big tactical rules sets used by the miniature sides of things. The narrative elements also offer a chance to speed play. There’s a risk/reward element to using Plot Points in combat. You can use them to trigger critical hits or summon battlefield support to damage opponents but you also need to keep some on hand if you want your pilot to eject safely from a damaged mech without putting them in danger of being injured by the experience. It’s an intriguing combination of narrative and mechanical elements that worked for me despite my skepticism.

The book focuses on the original Succession Wars era of 3025, which makes sense given its popularity and how it connects to the very excellent Hare Brained Schemes computer game. There’s a small primer on the setting and various historical eras that have evolved in the decades the game has been around, including an appendix that makes Clan mechwarriors and mechs playable. But it also highlights one of the big paradoxes of the product: for a game that’s meant to be an easy entry into the Battletech universe, it makes a lot of assumptions about what the reader already knows about the setting. For example, there are no rules for mech customization or creation. The assumption is that you would port over those things from technical readouts or the Tech Manual. Maybe I’m misreading the intent because it seems like a product made for me: someone who already loves the setting but doesn’t like the heaviness of the current games. I liked it, but that seems like a much thinner slice of potential customers than people who want to stomp around in a rich sci-fi setting full of political intrigue and cinematic explosions.

Mechwarrior: Destiny is an excellent game for Battletech fans who want to experience the world without always having to book out a day for hardcore minis gaming.

If you found this review helpful, please consider purchasing the game through the included affiliate links to directly support the reviewer
Last edited: Aug 14, 2022
Click to expand...

You pretty much listed the reasons I got off the ride at that point.