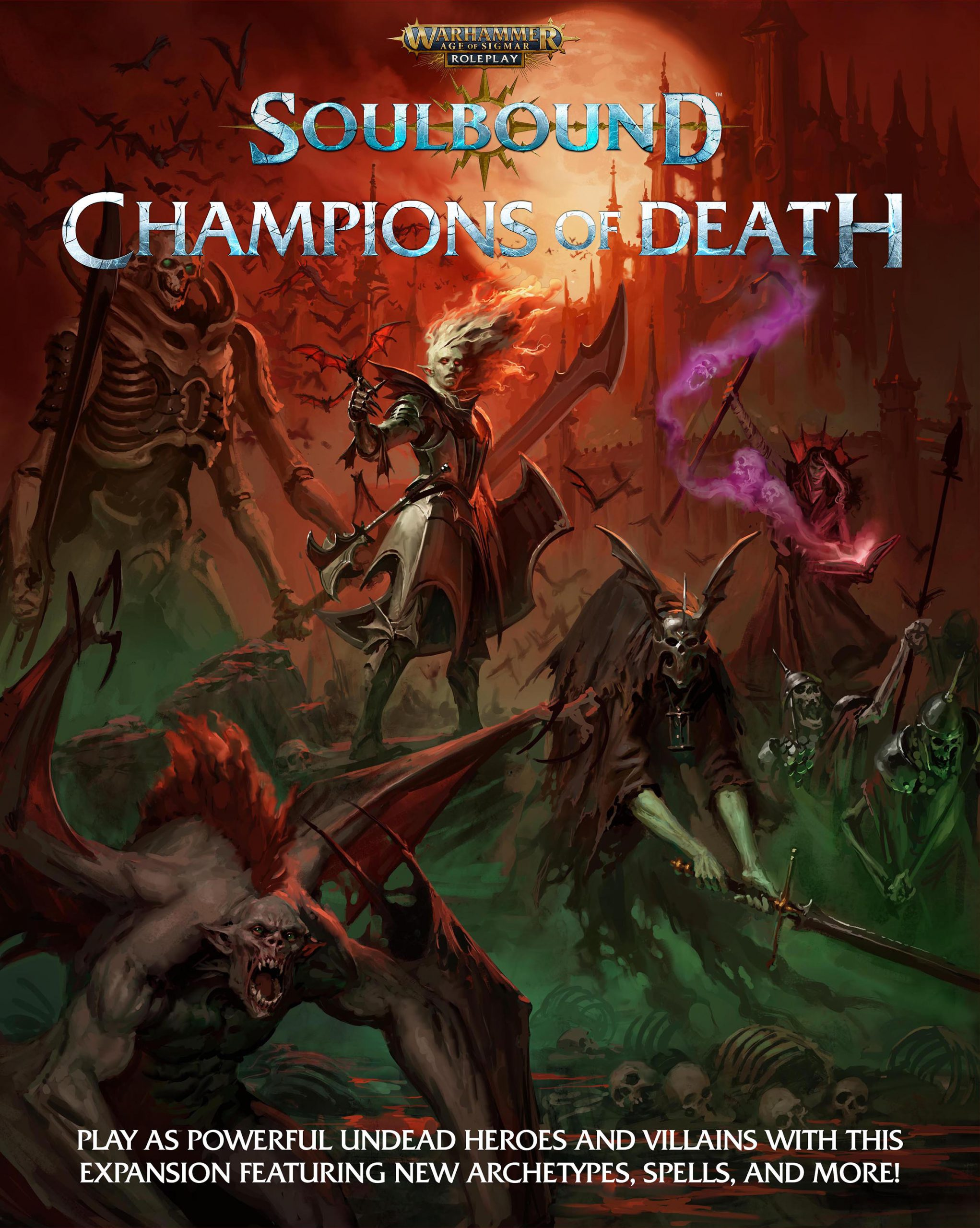 There are some impressive character options in Age of Sigmar: Soulbound. Flipping through the main book offers everything from tree people to blood cultists ready to fight against the forces of chaos. While Sigmar’s Stormcast saved the day, he had help from outside the world of Order. One of his biggest was the Great Necromancer Nagash, who sent legions of undead warriors to push the forces of chaos out of the Mortal Realms. Now those forces get their own book called Champions of Death to offer players a chance to bring a little darkness to their hopepunk battles.Did the review copy I received warm my black heart? Let’s play to find out.

The structure of Champions of Death from designers Emmet Byrne, Michael Duxbury, Cat Evans, Cody Faulk, Jordan Goldfarb, Elaine Lithgow and KC Shi mirrors that of the first book in the series, Champions of Order. The opening chapter reveals that Nagash had a hand in creating the original soulbinding ritual and that, when the time came, he created his own to use on his undead minions. The discussion then proceeds to discuss how an undead binding might come together in a way similar to the ones originally discussed in the core book and expansion. The discussion makes it clear that these characters are more anti-heroes than the base archetypes. Rather than fighting for Sigmar or to protect their realms, they see Chaos as a bigger threat than order so, for the time being, that’s who Nagash wishes to fight. In the ongoing metaplot of Age of Sigmar Nagash does turn on Sigmar, but the book offers options for groups that aren’t willing or able to play out this sudden yet inevitable betrayal.

The book offers four broad categories of the undead with discussions of subfactions and archetypes included with each. There are the Flesh-Eating Courts full of ghouls who consume the flesh of the living while believing themselves to be the noble heroes of their own stories. There are the Nighthaunts whose restless spirits walk the Mortal Realms causing untold death as they seek their purpose to finally, truly die. The Ossiarch Bonereapers treat bones as building material and creature multilimbed brutes and skeletal death riders. Finally the Soulnlight Gravelords are the nobility of the night featuring bloody vampires and obsessed wights who put aside their petty games to battle Chaos.

In case the names weren’t a clue, these are not the brooding monsters of the World of Darkness. The tone is much more akin to Army of Darkness with players giggling as they bark orders to their zombie manservants. It fits in line with the rest of the tone of Soulbound but the writers also are aware that existing games might not want to shift over to a full undead game. Each faction also gets a small section on why they might join up with a regular Soulbound crew. Epic backstories are part of the game here. It makes perfect sense that a vampire chose immortality to seek out his lost lover only for them to return as Stormcast and barely remember their passion.

These characters also get access to some new Talents. For example, Nighthaunts can heal themselves if they come close to any characters with the Frightened condition. This is an interesting companion to the Myrmourn Banshee’s ability to eat spells. Doing so causes the creature to emit a wailing cry which can cause people around it to receive the Frightened condition. Classic talents also receive some interesting twists. The book suggests reflavoring Talents to fit these characters, such as A Warm Meal becoming something more grotesque in the hands of a ghoul. The Loyal Companion Talent gets the expected bats, wolves and zombies, but the Ossiarchs get access to something remarkable: A Mortek throne, which is essentially an AT-ST made out of bones they use as a throne.

The Endeavours that characters can take on in between gaming sessions are one of the most flavorful things about the game. Not only do they reinforce character themes but they also generate player driven plots. Champions of Death has some fantastic options. Vampires can seek out specific types of blood to share with other vampires for a bonus to social rolls. Ghouls can choose to face the reality of what they are…or decide to embrace their delusions. And, if all else fails, players can retreat to their crumbling castle and seethe, declaring an ancient enemy did them wrong for bonuses to attack roles when facing that character in combat.

Champions of Death offers an excellent set of options for Soulbound tables to expand into some high, dark fantasy. Why fight the curse of Strahd when you can be him?
Click to expand...

I've been wanting to try Age of Sigmar: Soulbound for quite some time. To the point when Humble Bundle had that FANTASTIC bundle deal that pretty much gave almost the ENTIRE product line, I snatched it up quickly. (I learned from my mistake of not grabbing the 13th Age Humble Bundle).

Champions of Death was one of the few books that wasn't available in the line at the time. And it's DEFINIETLY one of the books I want to get simply because a number of the Archetypes in there look hella cool. (Now I'm waiting for the Chaos book and Age of the Beasts as my next two anticipated released in Soulbound).

the Champions of Destruction is also a fun supplement.