Before Christopher Helton was a part of Outland Entertainment, he was my first editor at EN World. When he let me know about his latest RPG through them, Action-Heroes, was available as an ashcan, I was drawn in. For comic books, the ashcans format saw occasional use as a short black and white teaser of an upcoming comic. Since Action-Heroes is a superpower based RPG, offering a digital ashcan is the perfect way to announce the game. I reached out and we talked about the mechanics, the superpowers, and the upcoming Kickstarter for the full version of the RPG. 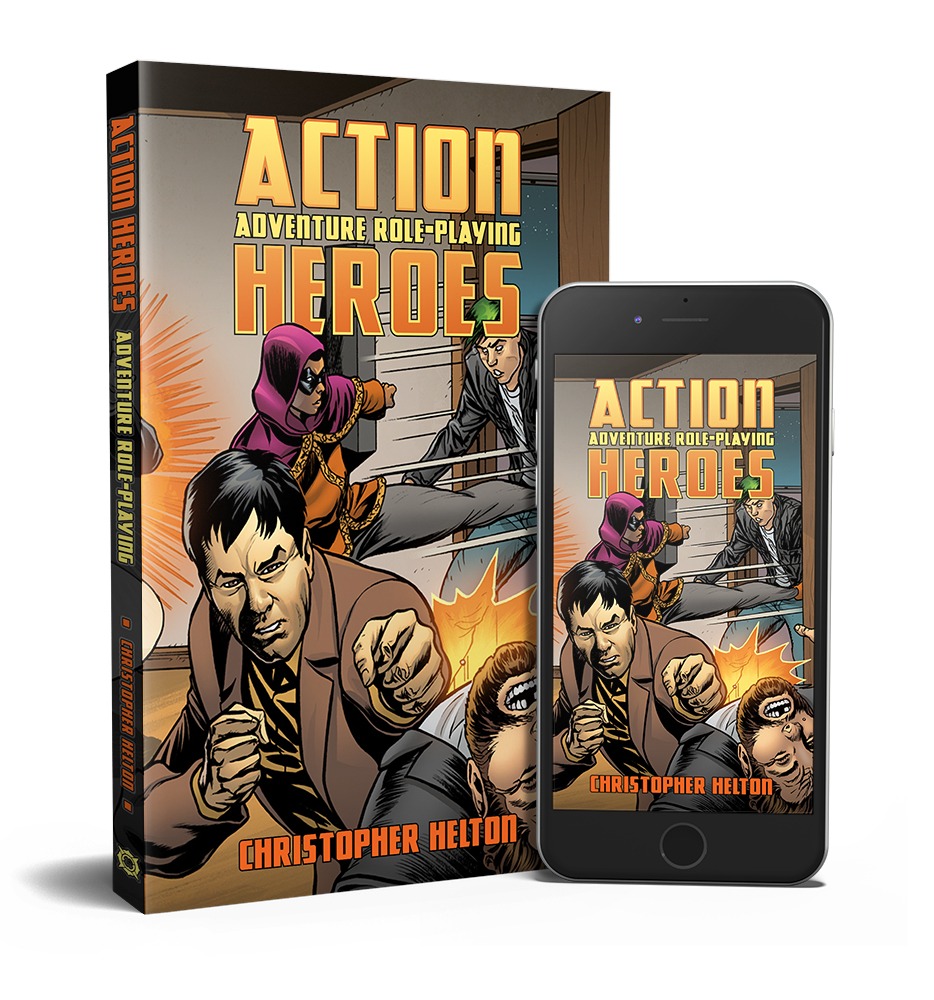 EGG EMBRY (EGG): Thanks for talking with me about your latest project. You’ve put out an ashcan RPG and you’re preparing to expand it into a full RPG with a crowdfunding campaign, correct? Let’s start with the core, what is the concept behind Action-Heroes RPG?
CHRISTOPHER HELTON (CHRISTOPHER): I call Action-Heroes a cinematic toolkit role-playing game. That’s a lot of words to say what most would probably describe as a “universal” or “generic” system, but I think it is a better descriptor. Role-playing games are always going to have limitations, or things that they do better, which makes developing a truly “universal” system that can cover everything difficult to do. The game is also fairly streamlined, which meant making decisions on what I thought were the more needed parts of a role-playing game, and keeping those things. My idea of what is needed for an RPG, and someone else’s can be dramatically different, but all of that underlines the difficulty in coming up with something “universal.” The final decisions on what did, and did not, go into the game were ultimately determined by how I approach a game, and the kinds of things that I look for in the mechanics of a game’s system. I want to play games that are easy to understand and explain, as easy as possible to make characters for, and simple to play. I also wanted the actions of the player characters to be rooted at the center of what happens during a game. I think that I achieved a lot with the design of Action-Heroes.

EGG: This uses an OGL engine, yes? What can you tell us about it?
CHRISTOPHER: Yes, I have taken material from a number of sources from Fudge and Fate to various 3.x d20-based mechanics to pieces of other, smaller OGL-sourced game systems and combined the pieces into a greater hole. Some of these pieces were pretty small, while others were larger, but as a whole Action-Heroes is something new. A lot of the time that I spent in development, writing and listening to the feedback of players was used in making the various pieces that I picked up mesh together into a new system.

EGG: When it comes to superpowers, what are available through this RPG?
CHRISTOPHER: The basis for superpowers in the game are what I called “Abilities.” These are things like having a special attack, reading minds, flying or being hard to hurt. You buy up ranks in these Abilities and combine them with in-game effects to make the things that your character can do.

EGG: Superheroes generally defend a city with little wider narrative until the company wide crossovers. How does Action-Heroes RPG address street level campaigns versus universe saving adventures?
CHRISTOPHER: Probably the biggest influence on the game is television programs like the Arrowverse shows on The CW, or the Marvel shows like Daredevil, Jessica Jones, or Agents of SHIELD. The default power level (called Action Levels in the game, to remain thematic) is roughly what is considered to be a “street level” kind of character. Can Action-Heroes do “high” level characters and stories? Sure, and in fact I am working on a multiversal supplement for the game that will handle higher powered games. My preference is for more grounded types of heroes, so that’s what I built the game around. The games that I have played a lot in the past, and that inspired me to do my own take on that kind of game, were games like Superworld and GURPS, and these games featured characters, even when higher powered, that were more human so I wanted to be able to do that with Action-Heroes as well. But, at the same time I call the game cinematic because it assumes that, while still fragile on some level, characters are also larger than life figures who do the big things in the shows that I mentioned before. Green Arrow or Daredevil might be human, but they can certainly do more in a fight than I can and take a lot of hits while doing it, and Action-Heroes tries to reflect that story logic. 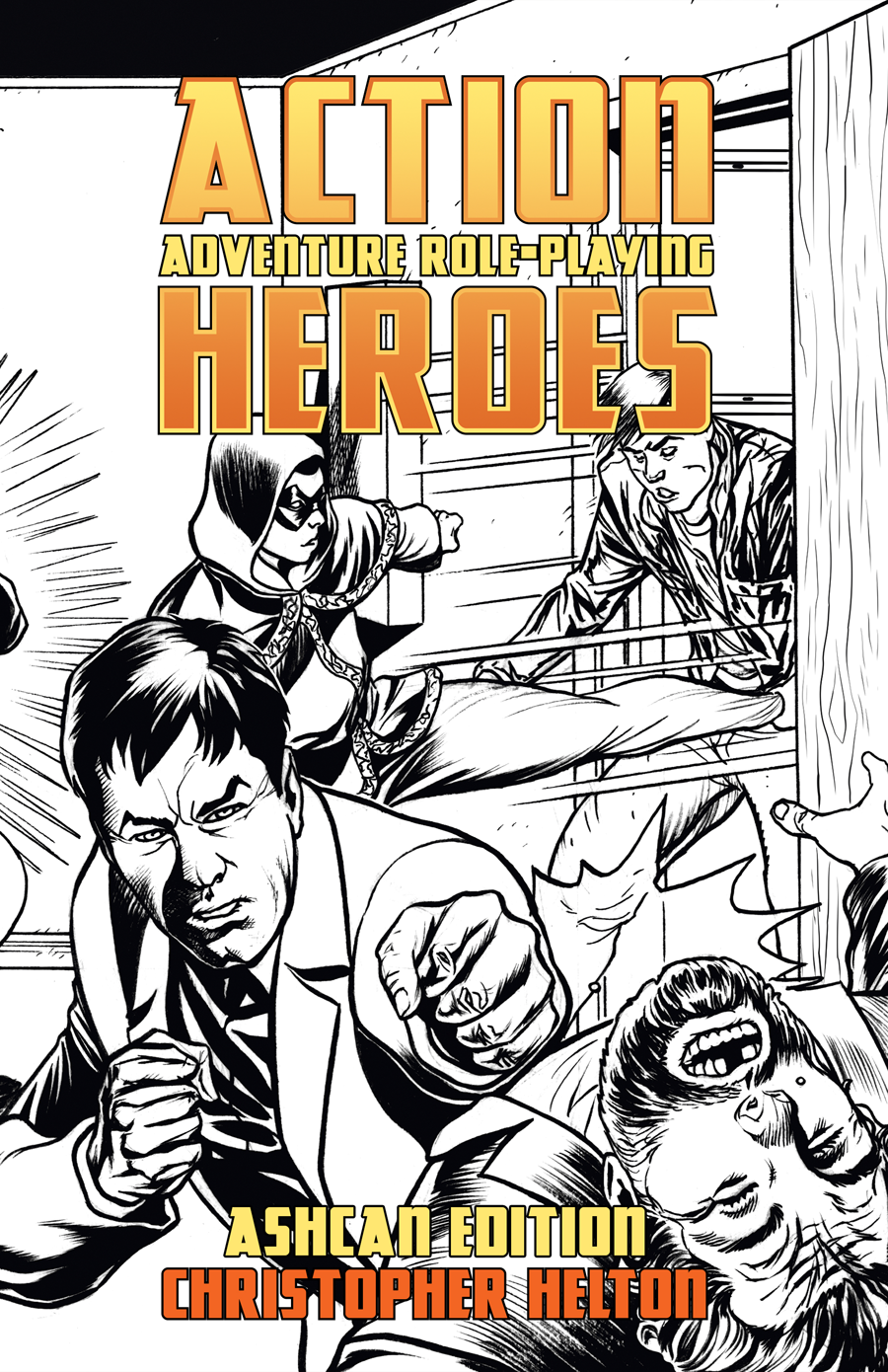 EGG: To generate interest in the upcoming crowdfunding, you have an ashcan version of the game available. What’s in the ashcan?
CHRISTOPHER: The ashcan is basically everything that you need to play, along with samples of the art. So that people will know what the final book will look like, and how the game will play. The manuscript has had a couple of editors look at it, and I’ve made corrections that I’ve found on top of what the editors found. But, there are always going to be thing that slip through even three sets of eyes, so we have an error tracking submission for set up as well. The final version will also three appendices of additional material: collaborative world-building guidelines for a group, an alternate magic system for people who might want an alternative to the Abilities-based mechanics of the core rules, and some walk-throughs on building powers and abilities for characters.

EGG: With the crowdfunding campaign coming, what improvements can fans expect with the new edition?
CHRISTOPHER: Other than the inclusion of the appendix material, we aren’t planning on adding more material to the game for the final version. The game is written. It has been playtested and had reader feedback. I’ve had sensitivity readers go over some of the material and give me feedback on sample characters and sample setting material. The art is completed. The graphic design and layout work has been done at this point. I don’t want the release to be delayed by having to write new material, commission new art and all of that. Once we make sure that all of the errors that can be caught are fixed, we want this off to the printer and then into people’s hands.

EGG: For those that don’t know your background, why are you working on this project for Outland Entertainment?
CHRISTOPHER: I’ve been working for Outland Entertainment for over a year now, doing game development on other projects, editing and writing material for other games. When I started working with them we made a deal for them to publish my Action-Heroes and Paranormal Friction RPGs, and to develop other multimedia projects based upon the games. The Action-Heroes RPG will be the first fruit to bloom from our shared tree.

EGG: Who worked on the ashcan? Is it the same team on the full version?
CHRISTOPHER: The cover and interior art was done by an artist named Lee Oaks. He’s worked with Outland Entertainment on other projects, as well as having done sequential comic art for a number of publishers and graphic design work. I did the art direction, and I think that he did a great job of bringing the characters that I’ve created for the game, and the worlds that have been in my head, and put them onto the printed page. Graphic design and page layout was done by Jeremy Mohler, who founded and runs Outland Entertainment. The process of art direction was a bit nerve-wracking for me at first, because it was my first time controlling the generation of the art for something I’ve worked on. Past projects have been me writing words, submitting them, and then seeing how things look months later. Once I got past my nerviness over working with professional artists, it was a great experience to have a hand in shaping what the art of the book looked like.

EGG: Beyond Action-Heroes RPG, what else are you working on?
CHRISTOPHER: My next full game is probably going to be my Paranormal Friction RPG. I have been a fan of paranormal romance fiction for probably thirty years, and I’ve wanted to do a game about it for almost as long. Paranormal Friction is a Fate-based game, and it also incorporates bits from a couple of other systems into it, but nothing as extensive as with Action-Heroes. I am working on the first couple of supplements for Action-Heroes, probably the first one we’ll see being an adaptation of the setting from a series of novels published by Outland Entertainment to the system. I have some sundry games that I am working on for Outland, and I might even have an all ages game that homages an old school RPG that is a fan favorite to a lot of gamers.

EGG: Where can fans find the ashcan and more information about the upcoming crowdfunding?
CHRISTOPHER: The ashcan edition is currently available at DriveThruRPG, but the availability of the ashcan will end at some point during the Kickstarter. You can also sign up to be notified when the Kickstarter launches on the game’s page at the Outland Entertainment website.

When I saw the title, this is the first thing that came to mind... 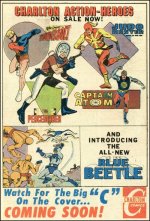 ... and the article seems to indicate it being in that wheelhouse.

Twiggly the Gnome said:
When I saw the title, this is the first thing that came to mind...

... and the article seems to indicate it being in that wheelhouse.
Click to expand...

The game's title is an homage to the Charlton Action-Heroes. A few months ago I was on a panel at a convention with Mike Gold (a long time comic editor who worked on some of the Charlton characters when they came over to DC) about my love for the characters from my childhood, and how they were an influence on the game.

Plus, you know, action heroes in general.