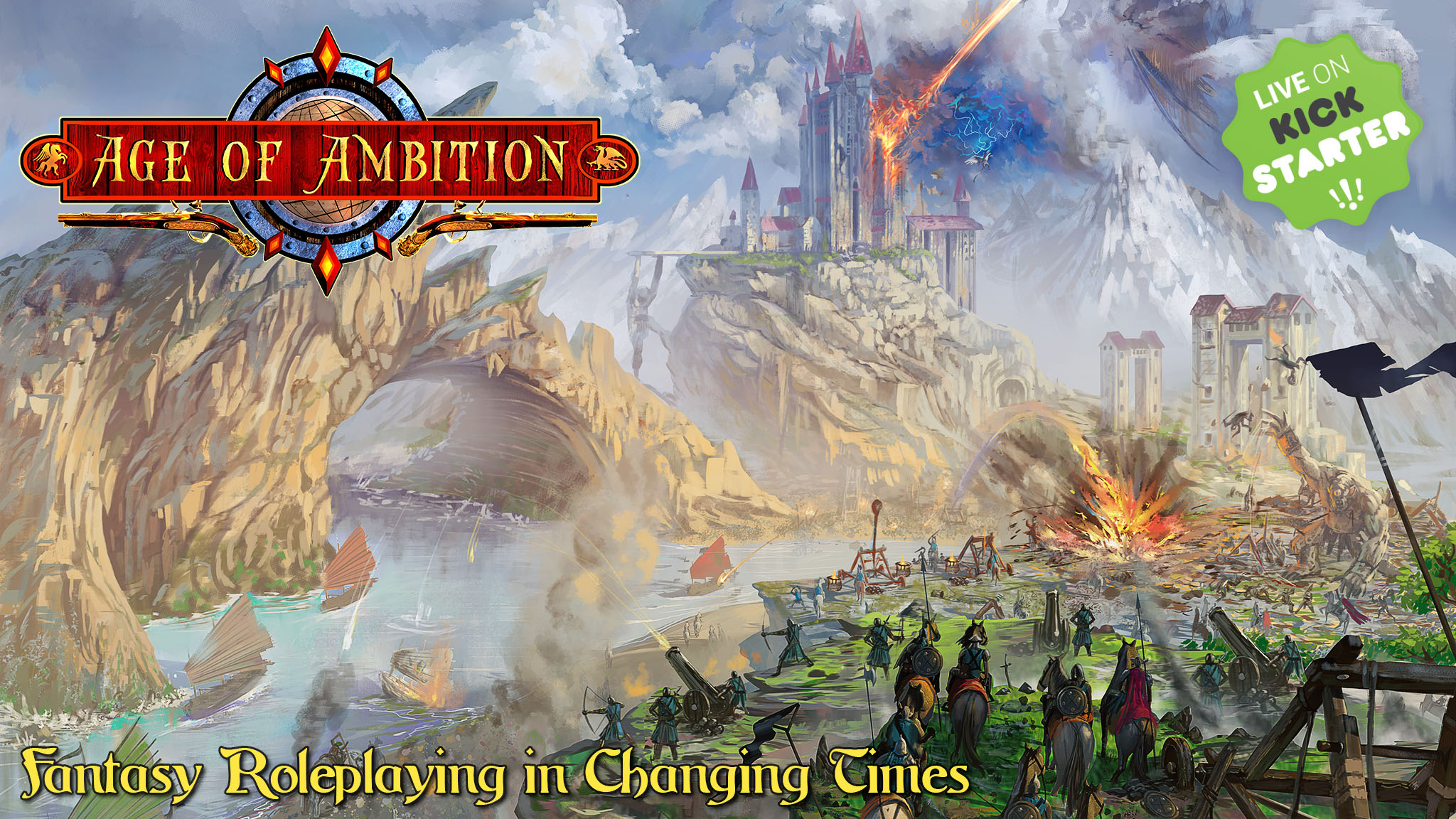 Age of Ambition is a fantasy roleplaying game set in a world rapidly leaving the traditional fantasy milieu behind. It's the game of forward-facing fantasy! Where the heroes help guide the world into a brave new era of promise or peril.

Coming to Kickstarter on January 21
Click the above link and then click "notify me" to be notified when the Kickstarter launches.

What makes Age of Ambition different?

Fantasy has long been a backward-facing genre. It’s been mired in static worlds that stand unchanged for hundreds or even thousands of years, with no significant technological, magical or social progress.

But now we’re at a moment where fantasy, as a literary genre, is beginning to realize that societies change, grow and evolve, even if fantasy gaming has lagged behind.

Age of Ambition changes that. It presents a world in a state of rapid flux, where magical and technological advancements are challenging the long-standing social order. It’s a world that’s grown beyond medieval fantasy to become something new.

Furthermore, Age of Ambition casts the heroes as agents of social change. They are inventors and agitators, spies and civic leaders, who help guide the world into a brave and uncertain future.

Age of Ambition will be a hardcover full-color book estimated at about 280 pages. The game uses the Saga Machine system. Its features include:
The World

It takes place in the fantasy world of Trystell, home to a number of different peoples—from humans and minotaurs, to ogres and gnomes. It is also the moon of a gas giant, with a hostile sister moon that once tried to colonize the world.

Socially and culturally, Trystell is rapidly advancing from its equivalent of Earth’s Middle Ages, into what might be called the Early Modern era. This is giving rise to new ways of thinking, and to advances in both magic and technology.

Most of all, Trystell is a world that’s facing its future. It’s beholden to shades of gray and intrigue. No one knows what this new era will bring, but with it comes great peril and great promise.

So strap on your breastplate and pick up your pistol. There are discoveries to make, wrongs to right, tyrants to overthrow and new social orders to trial.
Last edited: Jan 21, 2020

The Kickstarter is launching TOMORROW at 10 AM Eastern!

The campaign is on fire! We've blown through our initial funding goal and three stretch goals. We're close to the fourth stretch goal!

We've blown through the fourth stretch goal and are almost to the fifth!

We're up to FIVE stretch goals unlocked and are well on our way to the next one!

We're up to SIX stretch goals unlocked and are entering the final week of the campaign!

We're in the final hours of the campaign and closing in on the final stretch goals!

We're in the final 24 hours and all stretch goals have been unlocked!

B
Coming Save the Date: What Lies Beneath for Age of Ambition launches October 11

Sep 21, 2022
beholdsa
B
B
Kickstarter What Lies Beneath, an urban campaign and city sourcebook for Age of Ambition roleplaying game is live on Kickstarter!