Hey howdy folks, it’s time for another PAIZO REVIEW! We’ve got a bevy of new products ready to see their minute in the spotlight, and it’s up to us to give it to them. Let’s start things off with the Agents of Edgewatch Player’s Guide! 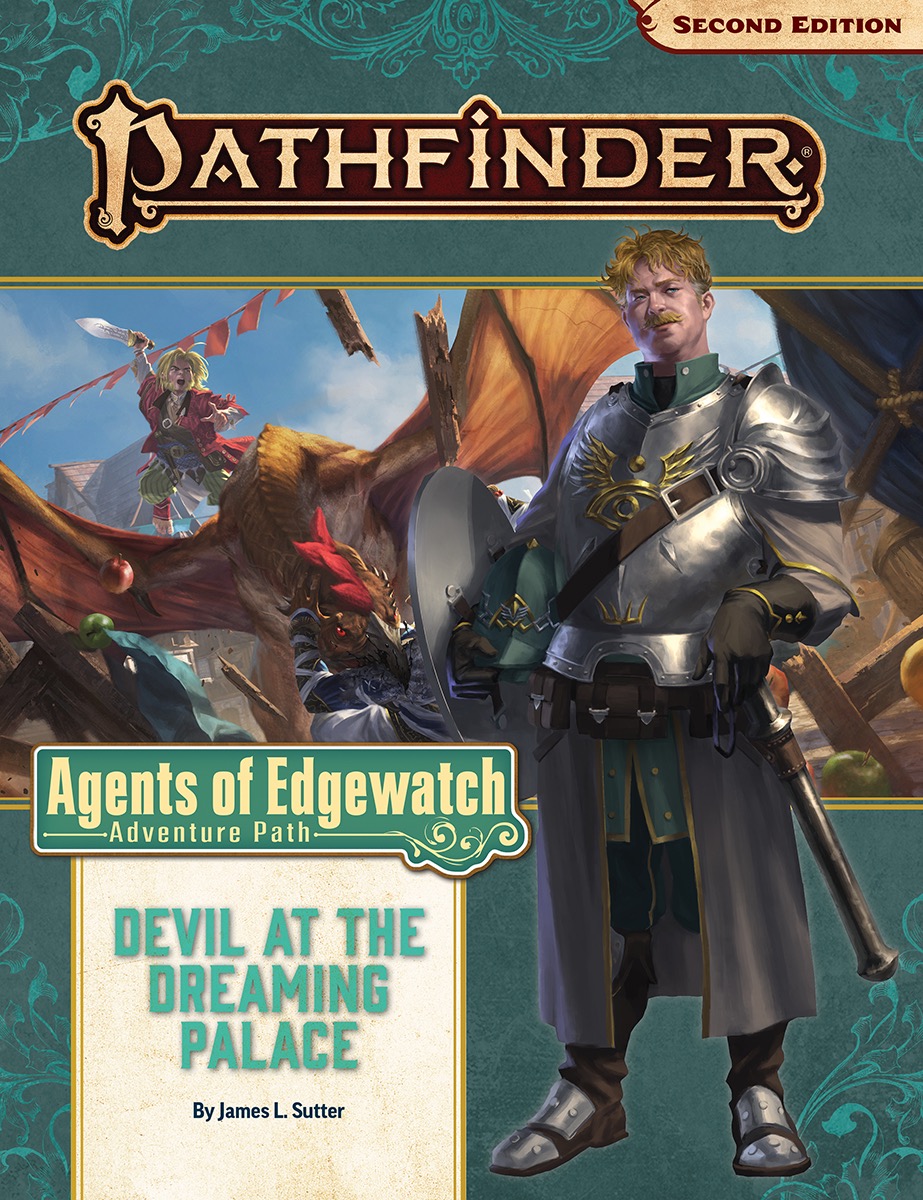 This whole family of related products is gonna have a huge elephant in the room, so let’s take it head on: this is the Player’s Guide to what, as I call it, “Being A Cop Is Good and Fun” Adventure Path. Given what’s going on in the world today, this topic is problematic at best.

Let’s take a gander at what the Agents of Edgewatch Adventure Path seems to be, based on what we see in the Player’s Guide. A group of agents, presumably from the disparate agencies described below, are pulled together to roam around a city and…combat crime? while wearing…certainly SOME kind of identification, surely, shortly before an event of incredible importance to the city. Suffice to say, there are some uncomfortable parallels there to what is going on in the world right now.

In recognition of these current events, Paizo included a content warning at the beginning—something normally reserved for horror adventures. On the one hand, it’s good that Paizo at least addresses the very thorny issues into which the AP is delving. There’s direction to discuss the themes of the AP with the table so that enthusiastic consent can be had for the party going forward. On the other, anyone who has concerns about abuse of authority isn’t merely “uncomfortable” or “upset” by current events. It’s all capped off by a “if you don’t like it, don’t play it!” Which, yes, is technically true, you don’t have to play ANY of these—but isn’t Paizo in the business of writing adventures for everyone to play?

You might be thinking, “Sure, but what about the game, man? What’s actually in the Player’s Guide?” More bad news on this front—because Paizo is trying to walk back the “play a cop” nature of this AP, if a group wants to participate in this adventure without the law enforcement angle, the GM has to rewrite functionally the entire adventure. Major NPCs have to be renamed and given new motivations and connections. Fundamental plot hooks have to be swapped out, and even basic assumptions about character interactions are undone. It’s also worth noting that the sidebar that insists PCs are only doing nonlethal damage during their combat encounters contradicts itself later with a reassurance that some creatures can only be dealt with by law enforcement (the players) with lethal force. Yikes.

Getting deeper into the main content of the Player’s Guide, we get another show of good intentions early in the character creation guidelines. The Guide is explicit that characters in this AP should be “agents of justice” and “protecting the public”, not someone who abuses power. In addition, this section is equally explicit in forbidding evil characters—you can’t protect the public if you only care about yourself, after all.

Unfortunately, just like the content warning, this is undercut later on with the provided backgrounds. Several of them directly mention corruption throughout the city guard, and some even incorporate it directly. The Ex-Con background makes it hard to believe a character that uses it is really fully “good”, and it specifically notes that an entire district of guardsmen is a haven of corruption.

Another stumble comes with the Harbor Guard Moonlighter—a PC that takes this background literally eschews their post for personal gain and glory, and also mentions rampant corruption. The Post Guard background is a little less egregious—they’re really only a guard to fund their other hobbies, I guess—but the nadir of this pattern is the Sleepless Suns Star background. There are more uncomfortable parallels here, between the Sleepless Suns background and real-life concerns about Immigration and Customs Enforcement (ICE) in the U.S.

With all this obvious and widespread corruption floating around in Golarion, one has to wonder why the designers didn’t allow for options for evil characters. I can think of one option pretty easily—a group of corrupt and indicted officers are magically compelled to investigate a specific, dangerous case, and if they step out of line, their handlers, say, explode their heads! It’s not like there isn’t precedent for bad guys doing good like that.

And while we’re speaking of corruption—where do the Hellknights of Golarion fit in to all of this? They’re nominally all about law and order—they’d in theory make ideal candidates for this adventure—but they’re allowed to be capital-E Evil thanks to their association with Hell. I would be a little surprised to hear there wasn’t some background like “Hellkight Initiate” that got hastily scrapped before this went to print.

Well, I’ve spent quite a bit of time talking about what doesn’t work in this Player’s Guide, how about I spend some time talking about what I like? For starters, I LOVE the “Reporting for Duty” sidebar! Encouraging players to work together on backstories? Sharing knowledge of various districts to increase everyone’s involvement in the setting? Encouraging players to have history working together? Yes, yes, yes, more of this yes!

Also, this might come as a complete surprise to long-time readers of this column, but I’m a sucker for a good map, and the map in the Player’s Guide is EXACTLY what I’ve wanted for a long time. So often maps for fantasy cities look nice until you remember the scale, and everything shrinks to the size of a couple blocks! That’s not the case for Absalom City. This thing is measured in MILES, not in meters. I can make out streets and blocks and districts, and the large points of interest hook my curiosity and send me scurrying to the description. Honestly, it’s large enough that one might wonder about the logistics of things like communication and sewage, but this is Golarion, and they have magic.

Oh! And SPEAKING of the district descriptions: this is where I want to see that iconic full-page spread design to come into fore! I don’t think Paizo has released setting material for Absalom since 1E, and they might be saving up for a setting book later. I would have LOVED a slightly deeper dive into each of these districts, a little bit of art for an iconic character or landmark. I also think that having single-page delineations would make it easier for players to navigate when deciding what district to represent and how to get familiar with that district’s distinct flavor. Also, a bit more breathing room would allow for a few more character customization or flavor ideas, and isn’t that the point of a player-focused supplement?

All in all, the Agents of Edgewatch Player’s Guide has a few neat ideas and a few good design implementations that are drowned out by a clumsy understanding of and ham-handed approach to the themes of the module, both within the internal logic of the Player’s Guide itself and externally in addressing real world events. Here’s hoping Paizo can better address these issues in the actual Adventure Path itself.

I'm saying this maybe isn't that idea. This is the experience of playing a wizard or barbarian, just like always, though this time you don't get to pick your own wardrobe. You still use greataxes and fireballs to defeat your enemies, just like before.

Which is pretty franking far from an actual City Watch experience, at least how I understand it. (My only experience with law enforcement is what television has taught me )

Could it be the controversy and outrage is much more against what people thought the AP would be like, than what it actually is?

(I'm not trying to slight the protestors, I'm trying to say maybe Paizo didn't create a product that's worthy of our attention)

Stacie GmrGrl said:
The idea that it's wrong to fight against criminals (CRIMINALS who COMMIT CRIMES) wearing a badge is bonkers and shows that there is something off in how many people view this... That it's somehow more okay to side with corruption and criminal behavior than to side with the people who try and protect us from criminal actions.

And how was Paizo supposed to know a year ago that our political and socialistic climate would have turned to such an extreme left in the year since these adventures were written an organized? We're they supposed to see into some kind of crystal ball that our culture would turn against our defenders of crime? Come on. When Paizo first announced this adventure path they were congratulated for doing something different. They were congratulated for this idea.

Now they are being condemned for something they have no control over.

This review is so bogus and biased its baseless leftist propaganda.

Holding people accountable for their actions is not 'leftist'.