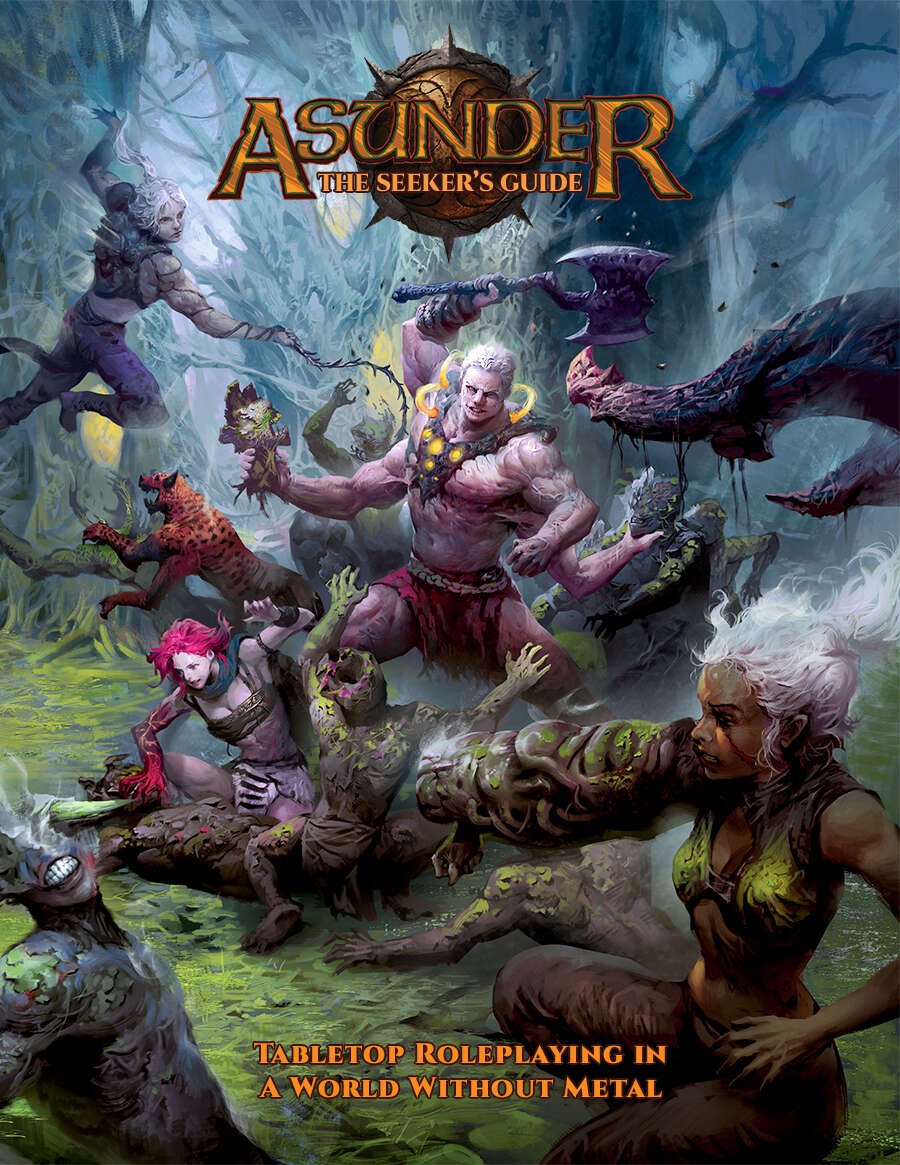 Most fantasy RPGs lean into the medievalism of Lord of The Rings, a handful throw things farther back to Iron Age fantasy that mimics the other big influence on fantasy RPGs; Robert Howard’s Conan The Barbarian stories. Here the protagonists are more mercenary, the magic more mysterious and battles less reliant on armor. Asunder, created by Adam Lawson and Landon Tom, leans into this primal world with a dying world and some different takes on fantasy concepts. They sent me the Seeker’s Guide and the Keeper’s Tome for this review, which were also written by Brian Engard.

The world of Asunder starts out in a perilous place. The gods have abandoned it, believed to have gone to fight a way elsewhere in the heavens. Before they left, however, they stripped the world of many precious resources, the most notable one being metal. Humans are the main force of what little civilization remains, but many have been mutated by the chaos magic the gods left behind. Some folks have been gifted with strange essences that give them powers and bond them to their homelands. A few of these become Seekers, player character types who are looking for answers to the Big Questions. Where did the gods go? Is the world dying? Can I do something to stop it?

The mechanical side of the game is built on the bones of Schwalb Entertainment’s fantastic Shadow of the Demon Lord. It’s a stripped down d20 fantasy system that uses boon and bane dice to reflect difficulty that caps characters at 10 levels with few restrictions on character choices as the game players. This system skips calculating experience for levelling up after a certain amount of sessions while allowing players choices at every level. I am excited to see this system appear in other contexts. The original setting is great but I think it’s overlooked because of its focus on grim fantasy. Asunder’s world isn’t exactly all candy and rainbows but it feels a bit more like the players can stop they end before it’s too late.

Asunder’s choices are a little more limited but what they lack in options they make up for in flavor. The classes split between novice, expert and master paths and have a broad split between magic and skill. Lineages give access to essence paths like being able to control swarms of bugs or bond with beats whose traits you might share. Skill classes also provide flavorful options, like a master of living whips or someone who doses on demon blood before charging into battle. There’s an X-Men meets Masters of the Universe meets Dark Sun feeling here that I really enjoy.

The Keeper’s Tome includes all the information you might expect in a Gamemaster’s Guide along with an element that I haven’t seen in a while; the chapter where the game explains its Big Secrets to the Keeper. I won’t spoil anything here, but I know that many GMs these days want to know ahead of time if there’s stuff like this that they need to process and possibly change for their own tables.

If you haven’t tried Shadow of the Demon Lord or are looking for a fantasy game that’s a little different, Asunder offers a short campaign in a flavorful world that I recommend checking out.

If you found this review useful, please consider puchasing the product using the affiliate links contained within. Thank you for your support.

Looks fabulous, sad though that there's no print on demand.
Is there a soft/hard cover somewhere?

Shadow of the Demon Lord system is way underrated IMHO. I much prefer the boon/bane system to advantage/disadvantage of 5E.

Five Things I Love About Shadow Of The Demon Lord
2