Best Left Buried is a horror fantasy RPG about crypt delvers, the treasures they find, and the scars they earn. Zach Cox, the author, was kind enough to talk to me about this RPG, an upcoming kickstarter for a large expansion, and running horror RPGs as a campaign 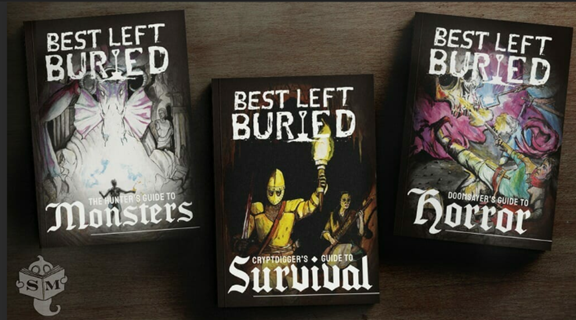 Charles Dunwoody (CD): Fantasy elements in the game include using magic via advancements and magic items many times with a cost in Grip (sanity). How does the interplay between spending Grip to use magic enhance the combined fantasy horror theme of the game?
Zach Cox (ZC): Best Left Buried always needed a system to show how scared you are, and the psychological damage on your character as they progress through the dungeon. Grip is a single number that acts as a coagulation of stamina, mana and sanity. It’ll get eroded passively by particularly scary monsters, but you can use it on abilities, items, magic and Exertion (re-rolls). Generally, spending it makes your character more powerful in combat and less likely to die, but if you run out of it, you die. Making the decision about which resource you’re going to wager, your Vigor (the red stuff) or your Grip, is a core pillar of the game. You’re more likely to die the less Grip you’re willing to spend, but you’re also less likely to attend up with Afflictions and Injuries, which are the only way to get Grip back. Afflictions and Injuries are fun to roleplay, but it’s important to me they feel like something the player opts into, rather than being saddled with. You choose how you spend your Grip; you choose what you spent it on. When you want some back, choose how, where and when the Afflictions happen. You’re also explicitly allowed to roll or choose an Affliction (if you feel like there’s one that would be fun, or make narrative). In other systems, ‘insanity’ systems feel like something that just happens to you as you play, whereas we wanted the rules in BLB to enshrine as much choice (and thus safety) as possible in the process.

CD: The default setting for Best Left Buried is renaissance setting with monsters and optional gunpowder. What horror elements get emphasized in a setting like this one?
ZC: We picked the Renaissance setting because of the themes of the stories we wanted to tell. Cryptdigging Companies feel very renaissance. They’re agents of Capitalism, which usually isn’t so much of a thing in a fantasy game. The real evil in Best Left Buried might be the Great Banks of Calmyn, not the monsters in the bottom of the dungeons. When I first wrote the Thirteen Duchies of Lendal, the setting for Best Left Buried, it was a more traditional fantasy setting, but the more I wrote about it, the more renaissance things were added. The influence of Brian Yaksha (who wrote the setting tables in the Best Left Buried: Deeper books) can really be felt here. These elements pushed the setting forward in time and really defined what the ‘themes’ of BLB are.

A non-exhaustive list: the downfall of the Calmynite monarchy, the ruins of the Tyranny of Lys and the Empire of Taurochtalia (our classical period analogues), the dominance of the Great Banks (think your West/East India Trading Companies), the decaying remnant of knighthood and chivalry in Roche and Calver, the exploitation of ‘foreign’ cultures in places like Fal, Salver and Norui… We added guns in pretty soon after. The game is about plundering ancient and moldy tombs for relics in exchange for money, which is a metaphor for a few things.

First, it explicitly frames the Cryptdiggers as participants in colonialism. You are adventurers, paid by a bank, to plunder the ruins of someone else’s culture so a bank can auction them off. The Cryptdigger Companies trade in contracts called ‘Exploitation Rights’ for a particular region or Crypt. It’s pretty grim. Secondly, it places the characters as the victims of this process. You don’t win by Cryptdigging. Your characters, who begin the game destitute but mostly physically and mentally intact, suffer in the Crypt. You get paid, but you might die, and you will almost certainly come out of the game with Injuries and Afflictions. This forms a pretty compelling condemnation of worker exploitation. You get paid, but you also get broken in exchange. The only guy who wins is wearing a suit in an office in a city a thousand miles away from the dungeon. 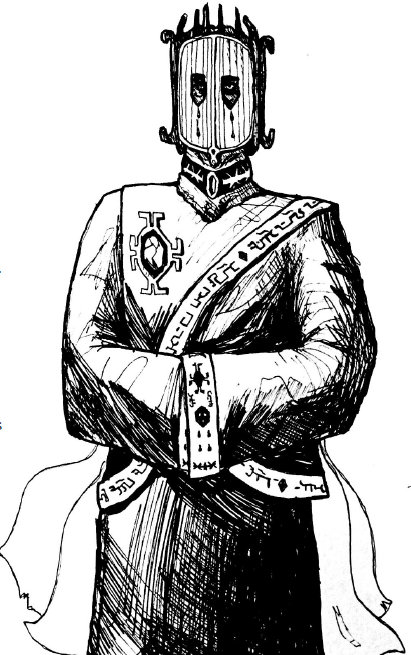 CD: Best Left Buried uses a 2d6 roll high system. In combat, 3d6 are rolled with two dice trying to beat armor class and the remaining going through as damage with a hit. This elegantly combines attack and damage in one roll along with some control of randomness. How does this mechanic enhance play and support the setting?
ZC: We wanted to keep combat quick and exciting, so combining the traditional hit roll and attack roll into one roll was important. It also means you can have advantage and disadvantage (which we call ‘The Upper Hand’ and ‘Against The Odds’ be used to add an extra dice and then remove the highest or lowest, working exactly the same way as the skill checks do. Plus, the 3-4 dice rolled means there’s a fair bit of bell-curving, which keeps combat exciting but still predictable. The way the mechanic works also incentivizes Exertion, spending Grip on re-rolls. Sometimes a single re-rolled being one higher can jump damage by a lot, particularly if you can suddenly use a big hit dice as a damage dice after a re-roll. Anything that is quick, simple to explain and incentivizes driving your characters to the brink of madness is a good rule in my book.

CD: Player characters die or go mad fairly easily and back up characters are recommended. How does including a Company, a larger group of cryptdiggers, offset the danger and allow for longer campaigns?
ZC: Dying in a game can suck. While it can make fun and memorable moments, you’ve got to make a new character and you lose one you probably cared about. It can ruin pacing, and ruin people’s engagement. Secretly, Best Left Buried isn’t actually a very lethal game. Compared to other ‘old school’ games, your characters are pretty tanky (starting with 2.5 ‘hit dice’, ish). Even a Crit probably won’t kill them. You also have access to an Advancement (a powerful ability) and a bucket full of re-rolls in the form of your Grip. You also get a coin flip worth of survivability when you hit 0 HP. That’s because you want your characters to survive enough for the Crypt to ruin them. That said, the Cryptdigging Company provides a few things that are useful:
CD: What adventure and campaign support is available?
ZC: We have dozens of adventures with incredible authors written for the system in all shapes and sizes. There’s an adventure in the core book, with a hexcrawl and two dungeons. There’s one big campaign book, Beneath The Missing Sea, an ex-nautical hexcrawl. We did the ‘Zinequest Quartet’ back in 2020, four 60 page zines with a variety of themes (from creepy apocalyptic British Islands to Greco-Malaysian colonial robot rebellions) quartet of books back in 2020. We did a huge collection of ‘zinis’ for our A Doom To Speak project, which is a series of one shot one page adventures, nearly 20 have now been released in this format. We also have a very broad license, so there’s a whole bunch of 3rd Party content not made by SoulMuppet. We did a game jam called CryptJam last year with another swathe of adventures. You can out more about the license here: The SoulMuppet License. The big new thing is Throne of Avaricer, our biggest setting book yet. It provides a load of details about Calmyn, one of the Thirteen Duchies, and the seat of the Great Banks that hire all the Cryptdigging companies to plunder the world for them. It’s got extended tables for character and company generations, and loads of adventure content. It’s hitting kickstarter this month.

CD: What additional rule options are there beyond the core books for the player, GM, and the monster book?
ZC: We did a trio of books with more options for players. The Ancestries Zine , which gives you rules for demi-human characters: Elves, Dwarves, Small Folk, as well as the more esoteric Gastropodians, Lamenters and Escaped Automatons. The Consequences Zine guide gives another batch of Afflictions and Injuries, as well as some Corruptions that you can catch in the dungeon. The Heroic Zine gives rules for high level characters, including special unlockable rules for powerful Wizards, Godsmen, Shadowjacks, Conquerors, Marshalls, Druids, Bards and Artificers.

CD: Many readers of EN World are D&D and Pathfinder players. What would you say if they asked why they should try Best Left Buried?
ZC: While D&D and Pathfinder can definitely do horror, they are at heart Heroic Fantasy games. Your characters get stronger over time. They laugh off the effects of a hard day’s dungeoneering after a long rest. The horrors they witness have no impact on them in them in the long run. Best Left Buried is a tailor made game designed to make your dungeons as scary as possible. Throughout the game your characters will struggle, and while they gain Advancements and get more power, they suffer character altering Consequences from what they experience. If you want lightning fast but satisfying character creation, rules that get out of the way of the fun and to explore how awful dungeoneering would be in real life, then grab a free copy of our Zini Edition rules and find out if Best Left Buried is the game for you.

CD: Where can gamers go to find your work?
ZC: Our webstore and website are at SoulMuppet Publishing Webstore, and we’ve got reasonably priced, import friendly shipping to the UK and EU, as well as a second warehouse in the states. You can find our mailing list there too, which is the best way to stay up to date on our products. The best place to talk about Best Left Buried is our discord server, which is full of fans of Best Left Buried and Orbital Blues.
Click to expand...

Thanks for the interview. Gotta say, by thread title, I assumed the interview was what should be best left buried.

Dark fantasy is very much my thing, and this sounds like a nice setting. I just might get it to see what it's about. But my go-to game is Shadow of the Demon Lord - and it's going to be hard to compete against that.

The Red Star: An Interview with Nils Hintze and Erik Hylander