I've been recently named Scoutmaster of my Boy Scout troop, so I thought it'd be a good opportunity to introduce Dungeons & Dragons to my younger Scouts during camp downtime. But first, I had to come up with something for them to play. 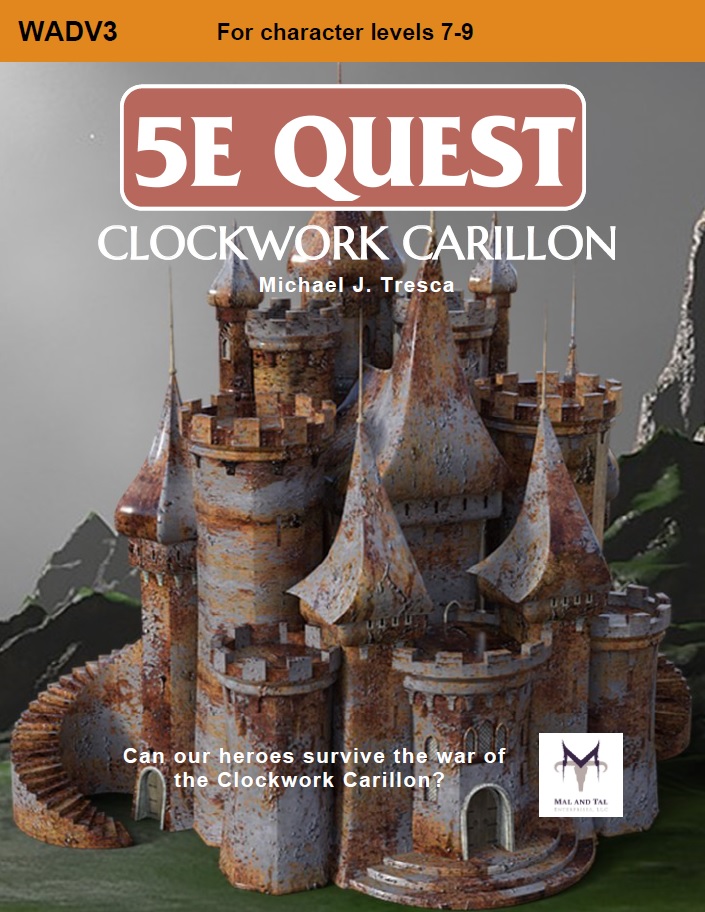 Every year our Troop goes to a week-long camp. Each Troop gets its own campground, but comes together for activities on the lake waterfront and for breakfast, lunch, and dinner. Scouts sign up for merit badge coursework throughout the week at a scheduled time every day for an hour (or, for more complicated badges, two hours). These can range from game design to animation to all the other badges associated with camping and the outdoors, like kayaking, emergency procedures, etc. I've been to camp once before and recognized that, particularly for new scouts who haven't bonded with the larger Troop, having something to do during downtime is important. So I put together a traditional dungeon crawl that they could easily join. Except, because I'm me, I went way overboard.

The plan was to play a game each day for a few hours in the center meeting space of our camp, after merit badge work was over but before dinner. These hours tend to be when scouts just hang out on their phones, get into trouble, call their parents, and otherwise feel lonely. Keeping them occupied is critical, and getting them to bond even more-so. 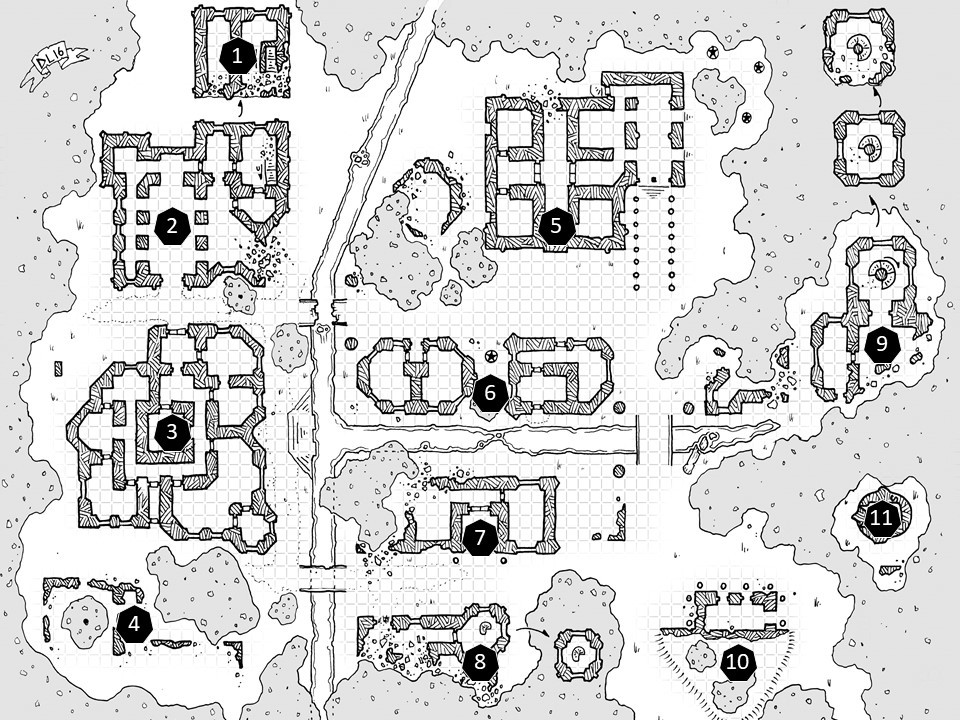 I build my adventures as if they are visits to my campaign world. This means that while higher level adult players may be trying to stop the apocalypse (the 7-8th level adventure in the above graphic), I create lower level adventures that take place behind the scenes for lower-level characters. I did this for my Troop once before when I taught the Game Design merit badge, so this adventure (the third "chapter" in the series) was similar.

In this case a clockwork tower erupted out of the ground near a marshland village, creating a swarm of constructs of various types. These constructs have been burrowing underground, creating mazes of sorts (dungeons), and in doing so drove the underground creatures who lived peacefully there above ground. These plant-creatures range from humanoid-looking to alien in nature, and their burrowing upwards to escape the clockworks caused the nearby village to sink further into the marsh. Abandoned, the remaining townsfolk have scraped together a reward to reclaim their home. It's up to the player characters to clear the place out.

For the town, I used Dyson's map of a Ruined Canal City. Dyson Logos' maps are amazing. You can choose form a huge variety of commercial-free maps at Dyon's Dodacehdron and if you're so inclined, support Dyson Logos on Patreon. I then threw together some monsters, mostly inspired by the Oz supplement I'm working on but taken from some of the other monster compendiums I've published.

For the dungeons beneath the town, I used Donjon's fantastic generator. There are dozens of generators at that site, so I highly recommend buying Donjon a coffee. I then switched out the monsters the dungeon created with creature lairs from the town above for the first level, and with clockworks from my own monster supplements for the second level. I now had three levels of adventure (town, basements, proper dungeon) to keep my players occupied for hours. 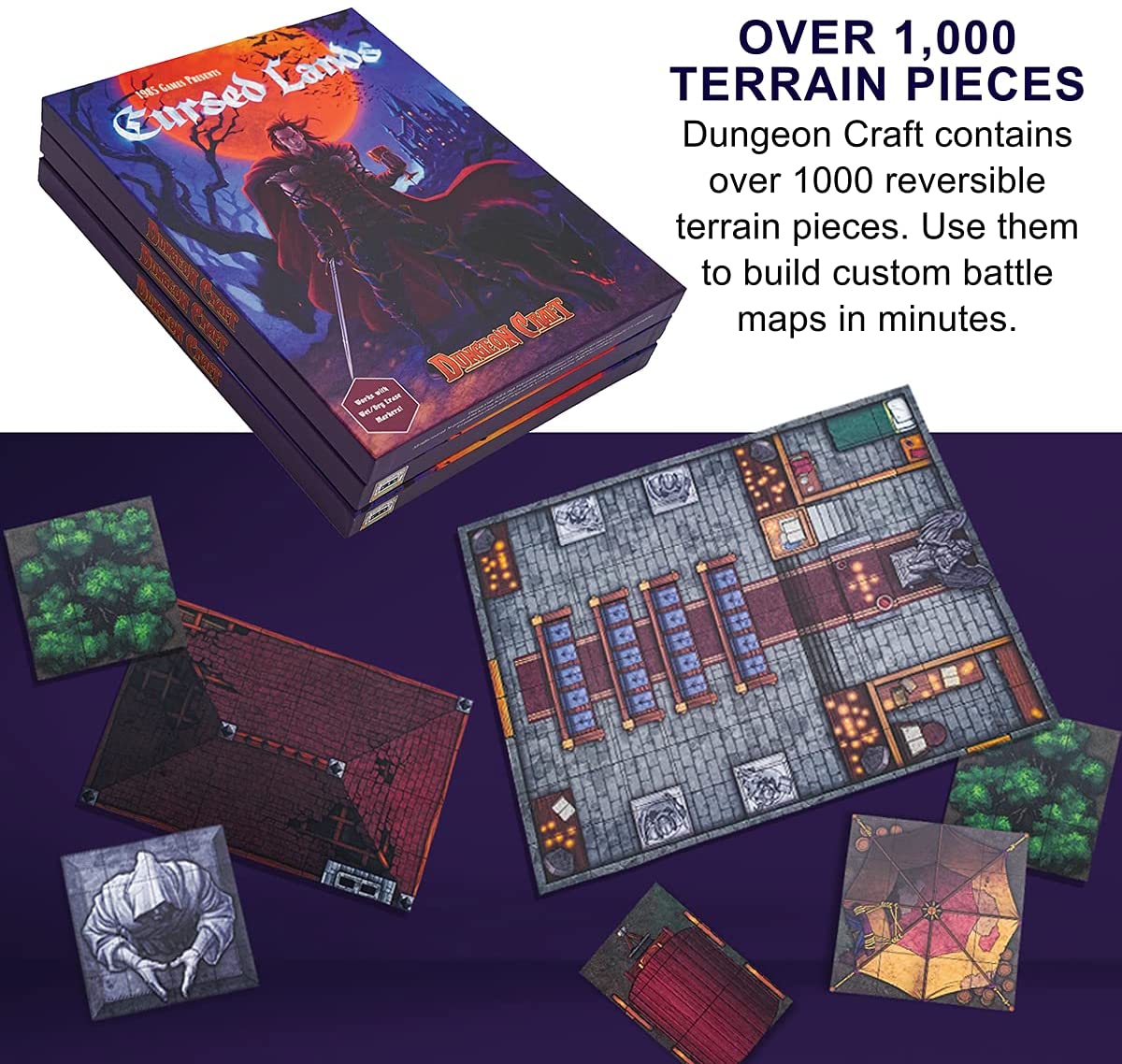 For the characters, I used Digital Dungeon Master's pre-made character sheets. I picked the least complicated characters. I also printed out multiple copies with the plan being that, as the characters would advance a level each day.

I have many Reaper miniatures, I've painted, so I set aside a bunch for use, trusting the players to pick the ones they liked best. I also have a lot of dice, so I separate them out into dice bags by color. The plan was that at the end of the camping trip, the players would get to keep their dice and miniatures. My goal was to get these Scouts interested in the game, and owning dice and a miniature is a great way to get started. 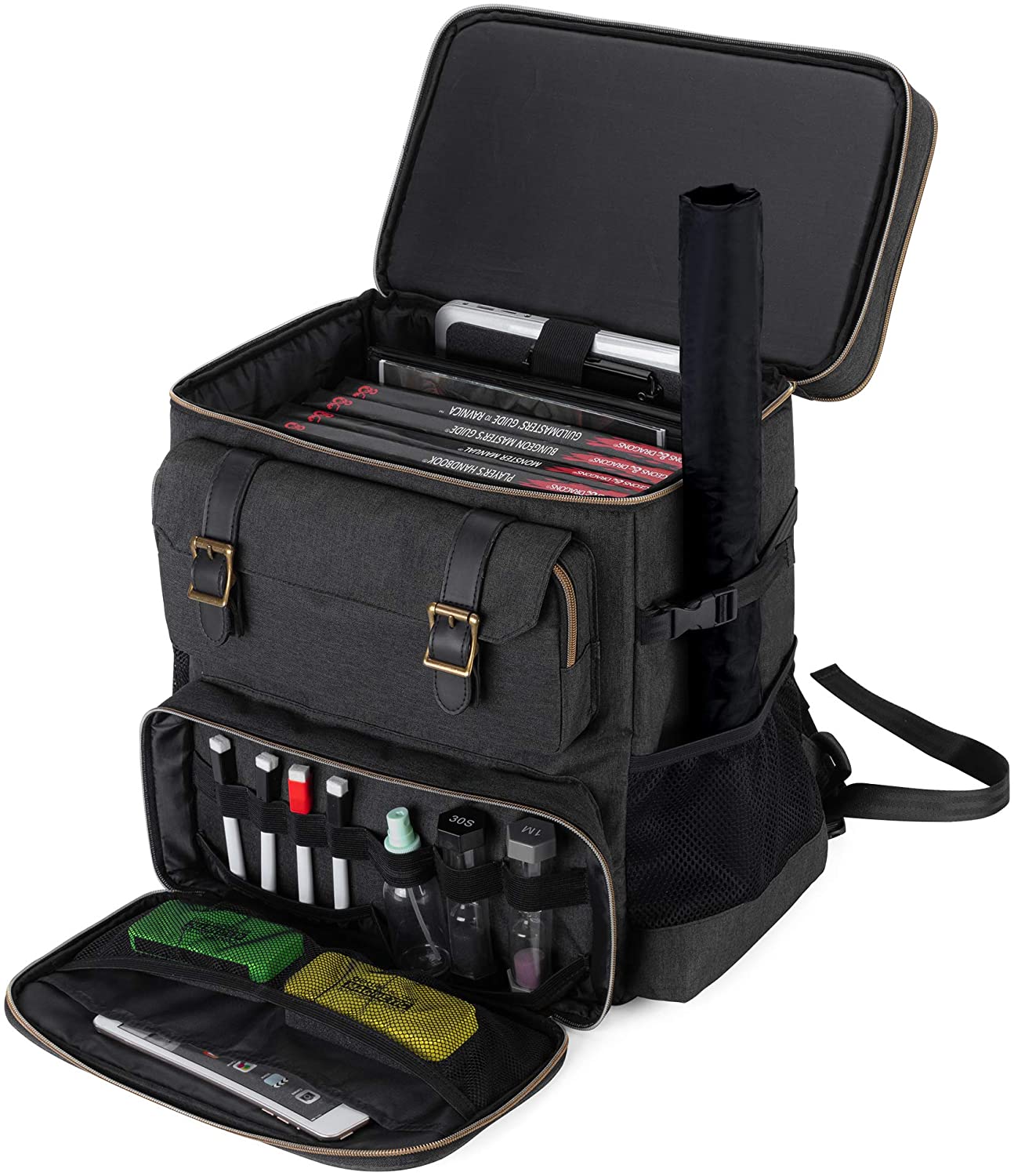 Packing for the Trip​

When I play D&D at home, I use all kinds of terrain, miniatures, and dice for our games. But taking the game on the road would require a lighter touch because we also have to pack my son's gear and mine for a week.

The first thing I did was commit to rolled-up maps. There's plenty of flat table space at camp, so we could stretch out as needed. But to give it a little flair, I used Dungeon Craft's Cursed Lands for both paper miniatures and buildings. This meant I was going to need to cut up a bunch of miniatures, so I spent the better half of an afternoon slicing everything up and separating it into plastic bags for easy transport and reference.

I realized afterward that many of my monsters weren't adequately represented by those paper miniatures, so I created my own. This took another day of finding the right graphic, sizing it appropriately, and cutting it out.

But the real test is carrying it. I have two different backpacks, one by Trunab which retails for $80, and one by AFUOWER that retails for $60. In the end, I chose the Trunab backpack because it's better suited for carrying up rolled-up maps. It comes with a sleeve to protect the maps, and the straps to hold it against the backpack are much sturdier.

I was ready. Now I just had to convince them to play with me. It turns out nature had other plans.
Last edited: Jul 26, 2021
Click to expand...

Nice. Having played a lot of D&D (and WEG Star Wars) at scout camp back in the day, and enjoyed annual week-long summer camp as both a scout and an adult leader, this fits perfectly! From reading what you’ve got planned here, I’m guessing it’s pretty open-table? We always had various activities in the center of the campsite mid-day that scouts and leaders wandered back and forth from (especially as some of us had merit badge “classes” at different times). This being back in the shadowy days of 2nd edition, our gaming was generally done in the evening (while more relaxed nerding out was done midday), but having an open table environment that guys can jump in and out of fits right into how I remember summer camp afternoons at scout camp! Good luck with this, and I hope you can sneak in a few lessons to sign scouts off on amid the adventuring!

P.S. I’m always amused at the explosion of badges in the past twenty years, beginning out of the ‘97 jamboree just as I was about to turn 18 — I lamented just missing the chance to earn the new Archaeology badge as I was applying to college for that major, now there are all sorts of fascinating modern or high-tech (like Game Design) stuff to do amidst the classics!

AmerginLiath said:
Nice. Having played a lot of D&D (and WEG Star Wars) at scout camp back in the day, and enjoyed annual week-long summer camp as both a scout and an adult leader, this fits perfectly! From reading what you’ve got planned here, I’m guessing it’s pretty open-table?
Click to expand...

Yes, I pretty much left it open. The older scouts could join, but they were already settled into their own routines. The idea being to give the newcomers something to join that nobody else is "already in." It was a good idea anyway, I'll explain how it actually went next week...

Scout camp in the late 80s was all about D&D. We would play in the afternoon and start again after dinner and play well into the night. It was 1e then so done theater of the mind. Usually 6 or 7 players and the same number watching. We would play multiple adventures throughout the week with a round Robin of DMs. Sometimes we would find other troops that played and compare notes.

We played capture the flag on some nights, but D&D was our go to activitie.

I remember those games fondly. All us kids huddled in the woods on a picnic table with a kerosene lantern for light. Smell of campfire and the cool night air.

I was a lousy scout as I didn't care about climbing rank. I just took the fun merit badges. but I loved camping and I was a good DM.

Staff member
My scouting days didn't have camp downtime suitable for such - we were a very busy bunch. I think gaming might be awesome for off-season meetings when the boys might not has as much to do, though.

And those bags are AWESOME! Jiminies I want one!

Playing D&D and/or Panzer Leader into the night by the light of a lantern? Oh yeah, that was Boy Scout camp for us too circa 1981-83. The Boy Scout troop was a major vector for getting people into the gaming hobby at the time in small town Wisconsin.

Sounds like a great project! Looking forward to hearing the rest of the story!


billd91 said:
Playing D&D and/or Panzer Leader into the night by the light of a lantern? Oh yeah, that was Boy Scout camp for us too circa 1981-83. The Boy Scout troop was a major vector for getting people into the gaming hobby at the time in small town Wisconsin.
Click to expand...

What part? I was back and forth between Dexterville and Fond du Lac last week (with a trip to Bristol for the Faire).

Mannahnin said:
What part? I was back and forth between Dexterville and Fond du Lac last week (with a trip to Bristol for the Faire).
Click to expand...

Poynette - about 20 miles north of Madison. Not exactly a bright center of the universe, but also not exactly the farthest from...

this would be a kids dream come true, well mine at least…great idea and well thought out! Hope to hear great news next week and that everyone had a great time.

I anticipate rain and wind for outdoor activities. Good luck!