Gaming Ballistic, the only third-party licensed developer of material for Steve Jackson Games’ The Fantasy Trip, launched their third Kickstarter providing support for The Fantasy Trip:

It launched and funded in nine hours.

The Character Collections volumes provide ready-to-play, rules-compliant characters for use as hirelings, rivals, extras, or even pre-generated characters. They're definitely useful for when an adventure or encounter calls for opposition you haven't prepared in advance...or when the GM needs a little creative inspiration.

The campaign launches with three volumes:

The campaign launches with these three volumes, but there are three more planned as stretch goals. These volumes (Wizards, Merchants and Caravans, and Pirates and Sailors) unlock as the number of backers that join the campaign at the $10 or more reward level hit certain levels. The PDFs of these books are added to your pledge rewards as the campaign succeeds!

The books are very nearly done, at least the ones that stat the campaign!

It also features cards in the "Decks of Destiny" style.

A comment from The Fantasy Trip Discord Channel was too good to not repost. So here, with permission from the poster, is a bit of love for "Character Collections for TFT"

"It is so great that we are going to see these materials somehow, by hook or by crook. I'm sure the markers will be a cool addition, but the character volumes and cards will make a huge difference at the table. When it comes to these sorts of materials, the key idea is the old Stalin quotation: "quantity has a quality all its own". 10 character cards is a novelty. 100 character cards is a resource. Hundreds of character cards is a functionally infinite support for nearly any kind of TFT game experience you can imagine. And the volumes let you use those cards as either a simple stat block for a 'drop in' friend or foe in an encounter, or as the starting point for a fully fleshed out NPC or PC with a lasting role in a campaign. Again, having 10 such things is sort of interesting, but having hundreds opens up limitless possibilities. I'd say this KS has the potential to impact people's play at least as much as DoD did."
Click to expand...

Just to emphasize some of this, here are the potential card counts if we hit all the goals:
There are also 1" square counters for use in TFT-style maps (or any style maps, really) featuring the same art style as you see in the examples.

The structure of the campaign is such that now that it's funded, stretch goals are unlocked strictly by backer count at pledge levels of $10 or more. So while there's a whole lot of stuff available, and available during the Backerkit phase...that $10 pledge goes every bit as far to unlocking stretch goals as a much larger number.

And if you missed TFT the first time around...as I did!...there's a New to TFT! pledge level that gets you a hardcover copy of the rulebook (but not a PDF), three solo adventures, and all the initial softcover books (Experienced Adventurers, Rookies, and Bandits and Outlaws). Perfect for getting started with the game for the first time.

You're not alone! They were so much requested that I worked really hard to find a vendor to do them. And I did!

Oooh, I hope the campaign knocks down all the stretch goals. I'm most excited about the merchants and sailors. But wizards are good too. Actually, I'm thrilled about all of them. I don't even play TFT at this point, but I'm certain to get plenty of use from these for my D&D and GURPS campaigns. I'm glad Gaming Ballistic is still producing material for Steve Jackson Games!

Two backers away from the NPC card deck! 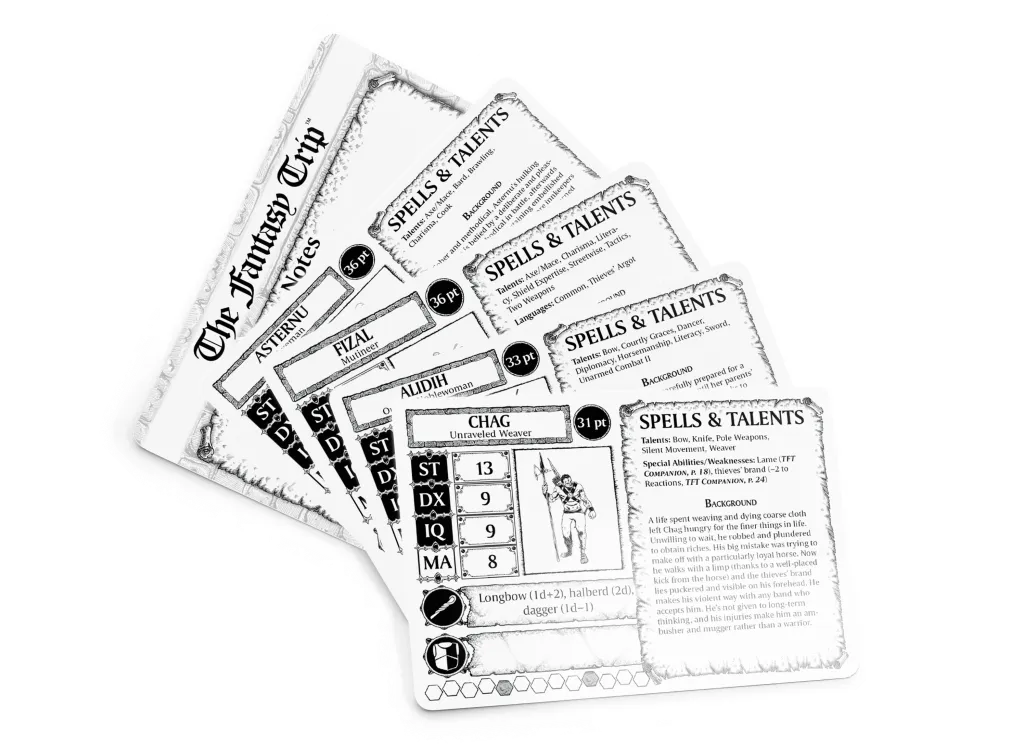 The Character Collections for The Fantasy Trip campaign has about a week to go. There’s enough information to make some adjustments to the campaign structure to make things a bit more convenient.

This is taking the form of new pledge levels which combine physical and PDF rewards into packages. There are now Print + PDF “one-click” reward levels for those who want physical books along with your digital rewards that are paired up with the existing four PDF-only pledge levels.

I’ve added a retail tier that is five copies each of physical books only, no cards or counters.

Finally, there are two tiers for those who are looking to go big. The All the New Things level assumes you have the books from both previous Perilous Journeys campaigns, and the original counter and card sets from Five Perilous Journeys…but want to catch up with everything that’s new since then. EVERYTHING OLD AND NEW is for those who want everything GB has done for TFT in one click.

What about the CC4 through CC6 stretch goals? As they fall, these products will be added to the appropriate reward levels at no change in reward price.

The New to TFT! pledge reward also benefits: As CC4 through CC6 are unlocked, you get those as well in Print and PDF!

The campaign can’t anticipate all possible combinations, but this should cover the big ones. If you’ve already pledged to a digital level, but the campaign ends before you can come back to adjust…don’t worry: You can switch freely in the Backerkit phase!

The Wizards book seems quite likely now with only another 101 backers needed.

uzirath said:
The Wizards book seems quite likely now with only another 101 backers needed.
Click to expand...

I agree. We'll need to get a flood of new blood to hit 700 or 1,000 . .. but with the restructuring and the certainty of what you're getting with the pledges...I won't rule anything out!

Kickstarter Live on Kickstarter: Kibbles' Compendium of Craft and Creation