Check Out the Scene at Atlanta’s MomoCon 2018

Atlanta, Georgia’s MomoCon 2018 ran from May 24th to 27th and welcomed “over 35,400 unique attendees”. The convention is a mash-up of cosplay, anime/manga, gaming, and comics in roughly that order of focus. 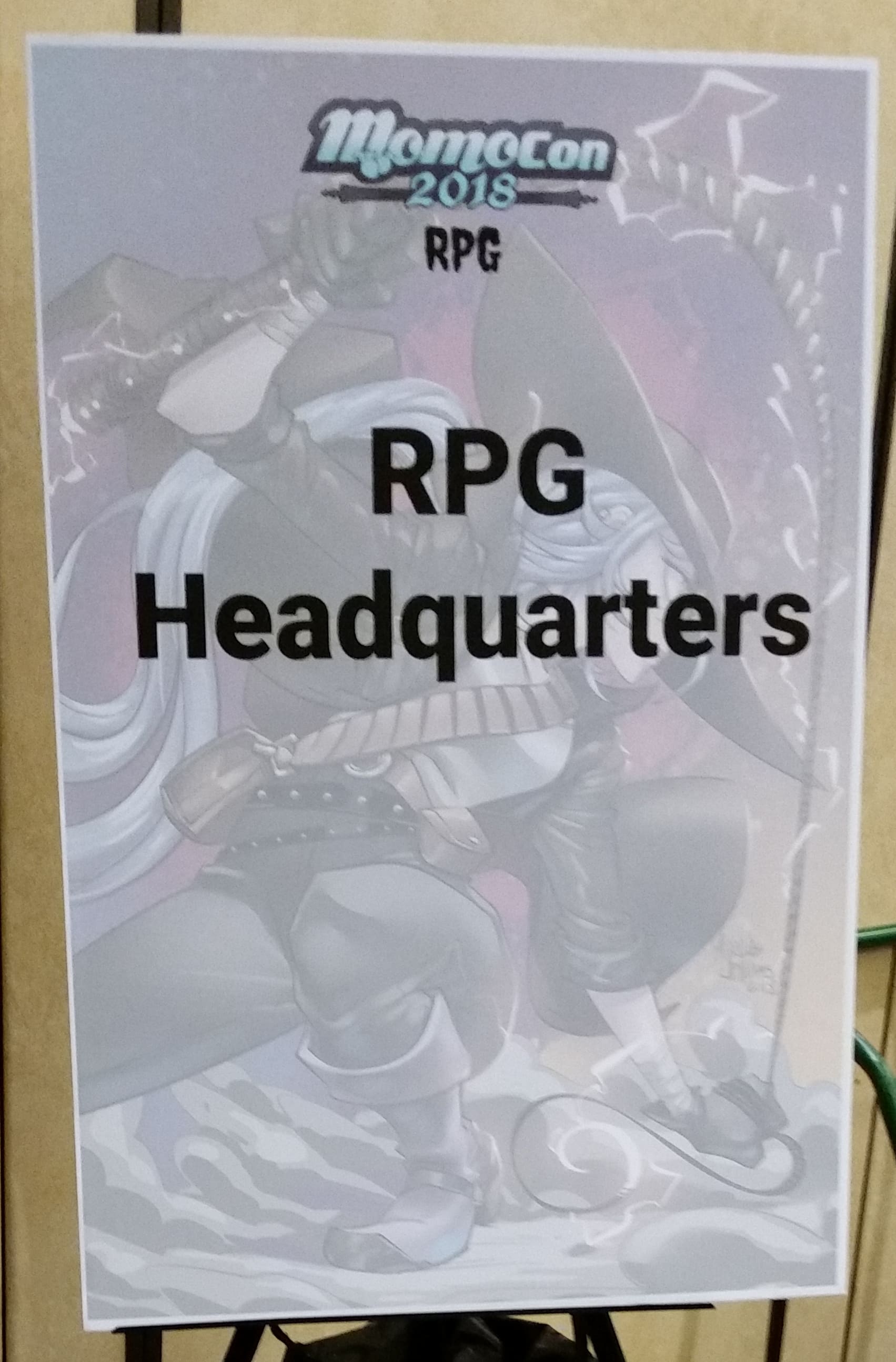 The gaming at the show is divided between video, CCG, board game, and RPG/LARP. Several tabletop publishers such as Chris Miller Games, Crow Scratches, Fantasy Games Unlimited, and Goodman Games had booths in the dealer’s room. In the RPG ballroom, along with D&D Adventure League, the Pathfinder Society, and the Starfinder Society, were sessions of Call of Cthulhu, Dreamscape Laruna, Dungeon Crawl Classics, Infinity RPG, Part-Time Gods, Shaintar, and more.

The convention is held at the Georgia World Congress Center and the (attached) Omni Hotel. The GWCC has a huge floor (a number of football fields side-by-side) divided by two partition walls. It’s hard to give dimension to it short of saying that area was the size of a neighborhood. Half of this hangar-sized room is the Dealer's Room/Artists Alley. Of the remaining space, the second area (maybe 45% of the remaining space) was: Board gaming (5%), card gaming (10%), and video gaming (30%). The last 5% of the hall, the third area separated by a wall, was the main stage/rave area. In the dealer’s area, the tabletop sellers were grouped together almost as far the gaming area as possible. Every game seller mentioned that last year they were against the wall that separated the areas and they made more money. 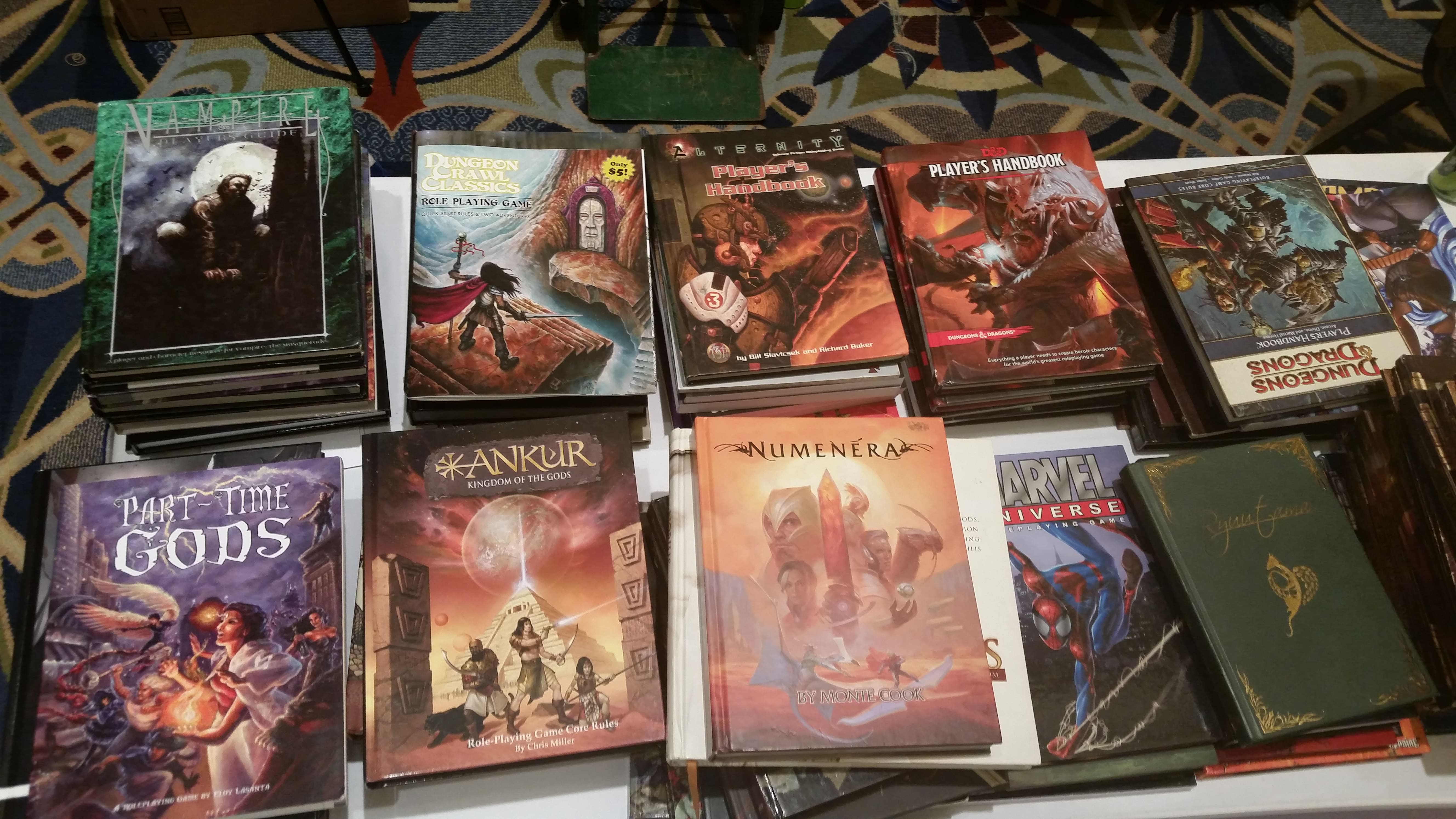 What was missing from that layout? RPGs and LARPs. That’s because, for the first time, they were not in the GWCC, instead they were in the Omni hotel. An area where MomoCon should be commended is their signage. There were no less than eight signs reading “RPG Games this way” with arrows guiding gamers from the GWCC through a hallway to the Omni Grand Ballroom. This gave the games a focused area in their Grand Ballroom; however, it limited walkups.

They had a variety of games available to play including 2-hour 5e sessions all day. You could pre-register for 5e Adventure League, Pathfinder Society, and Starfinder Society, or you could show up and sign up for a game. There were few open spots for 5e games or Starfinder games, both were popular. Beyond those, the nice part of smaller cons is you show up and, generally, can jump into a game and, despite its size, MomoCon excelled at that. While the convention as a whole is sizable, they managed to create the feel of a local convention.

For my part, the highlight games we played were an introductory Dungeons & Dragons 5e Adventure League session and Dreamscape Laruna by ODAM Publishing. In the 5e game, my new-to-D&D friend picked a Halfling Rogue that had a habit of InstaKilling™ everything she encountered. I think she missed one time, instead being the epitome of a first level murderhobo slaying 6 monsters (she was responsible for 40% of the party of eight’s kills). With Dreamscape Laruna, we got to play with James Ho, one of the game's freelancers. He was an excellent GM with lots of maps, minis, and a range of interpretations for his NPCs. Playing with a game creator demonstrates the game as it was intended. In contrast to the combat-centric 5e session we played, this one was all role-playing with excellent characters and a lot of social tension as opposed to combat order.

Beyond the games we sampled, there were playtesting sessions as well as RPG panels (including one that started at 11 at night involving four GMs discussing some of their favorite games that was well-attended despite the hour). MomoCon is a con of size, yet manages to make the RPG experience closer to the feel of a local convention while offering a variety of side options like anime, excellent cosplay, a varied dealer’s room, and much more.

This article was contributed by Egg Embry as part of ENWorld's User-Generated Content (UGC) program. We are always on the lookout for freelance columnists! If you have a pitch, please contact us!
Last edited: Jan 3, 2020
Click to expand...

I was so pleased that you specifically called out all my signage! I was super worried about people finding us in our new home.

Thank you for the wonderful write up!

If anyone has got any suggestions for improvement, I'm happy to hear them. Shoot me an email to rpgs.momocon@gmail.com

Ginny Loveday said:
I was so pleased that you specifically called out all my signage! I was super worried about people finding us in our new home.

Thank you for the wonderful write up!

If anyone has got any suggestions for improvement, I'm happy to hear them. Shoot me an email to rpgs.momocon@gmail.com
Click to expand...

I appreciated the signage immensely! It made finding the gaming area easy! And as Chris Miller pointed out on Facebook, the gaming ballroom reduced the noise levels compared to the con floor. It was a good experience! Thanks for all you did to make it so!

Egg Embry, Wanna-lancer
Click this link if you're interested in reading other EN World reviews of RPG games?
If you're a publisher and have a RPG that you'd like to have reviewed, please contact me here.
If you're looking for helpful tips and stock art for your RPG, check out CREATE YOUR OWN FANTASY RPG ADVENTURE - RPG RESOURCES BOOKS on Kickstarter (featuring James Ward, Lenard Lakofka, Rick Hershey, myself, and more).