MACE 25 ran from November 12 to 14, 2021 at the Hilton Charlotte University Place in Charlotte, North Carolina. MACE is a dedicated tabletop gaming convention heavy on board games, RPGs, and charity, one of the many local shows nationwide with under a thousand attendees. Conducted as a family oriented gathering, this was the 25th year for the show and really proving the longevity a local show can have. It was my first time attending and I went as a vendor offering RPG zines from my company, Egg Embry Publishing, as well as older RPGs from my collection. 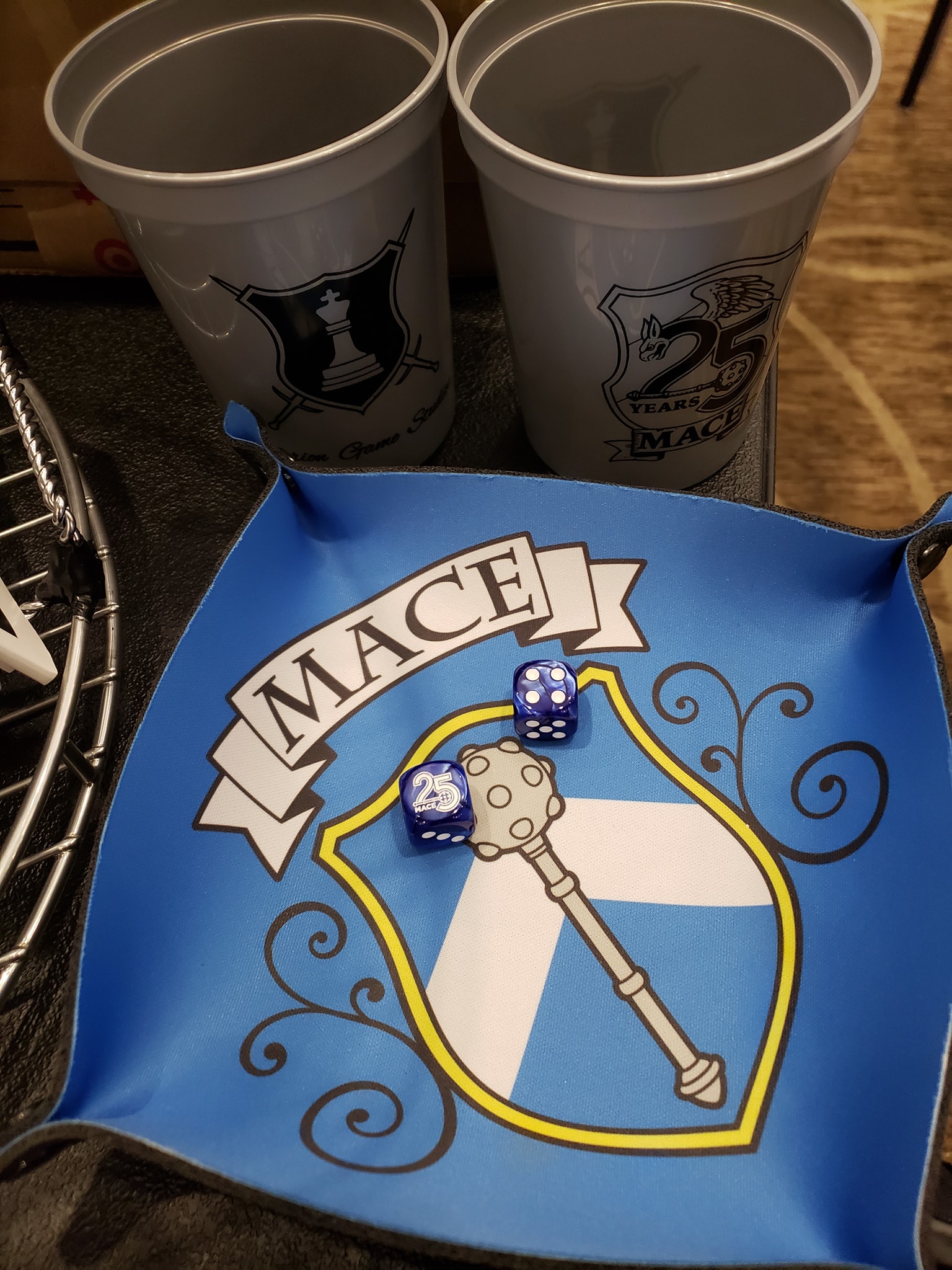 There are several MACE conventions run by Just Us Productions. MACE in Charlotte is the primary one, but there is also MACE West in Asheville, NC in March each year. In this article, I'll try to be clear when I'm talking about MACE (which I've been to) and MACE West (which I have not). 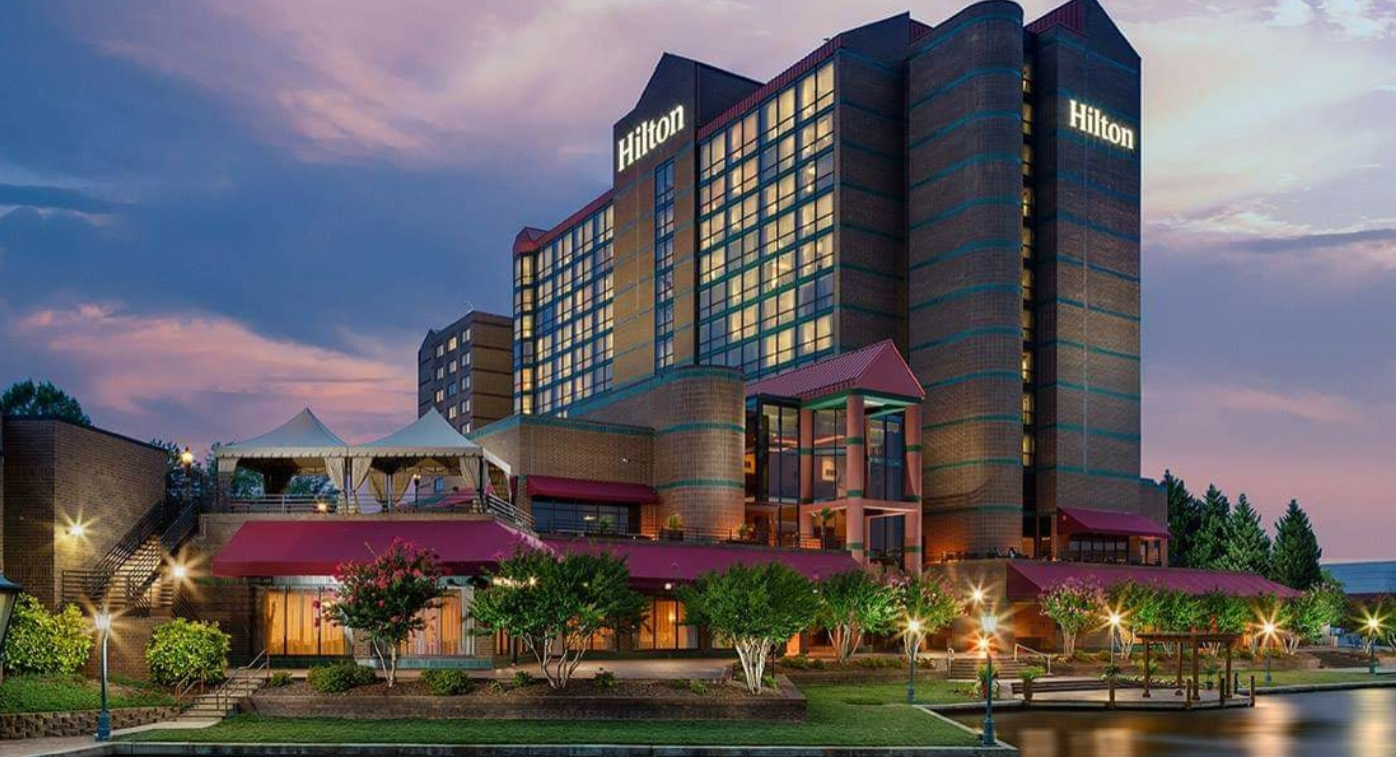 The Host Hotel and Dining​

For MACE 25, the host hotel was a large, nicely appointed Hilton. To give some idea of the costs, staying at the Hilton was $247 for Friday night and Saturday night. Obviously rates vary each year, but that gives you a baseline. My room included a mini-fridge so you could bring food and drink. Food wise, the hotel has eating options on the property, but they were limited due to North Carolina’s Covid restrictions. As I understood it, this meant that food options in the host hotel needed to be prepackaged instead of prepared on-site.

Of the states I’ve visited since the start of the pandemic (Georgia, Tennessee, Kentucky, Ohio, North Carolina, and South Carolina), North Carolina led with the most Covid safety observances and the most adherence to them.

In addition to what food the hotel offered, there were other options. Each year the con has a food service called The Grinning Goblin. In non-pandemic years, they offer sandwiches and pizza that you order, leave your cell number, and they text you for pick up. Outside of the hotel and convention floor, the Hilton is conveniently situated for other food options. You can stroll out of the back of the hotel, across an artificial pond to a collection of shops and sit down restaurants. There are also some fast food options if you’re willing to venture a little further.

The convention is held on the floor below the lobby (the hotel is on a slight hill with the back having a floor that is not visible from the front). There are elevators and escalators to the first floor/convention floor. The floor encompasses multiple rooms for gaming, a Dealer’s Room, several other rooms with demos, miniature painting, the Charlotte Gaymers Network room, charities, and The Grinning Goblin for food. Every inch of space is used for tabletop of some type giving the convention a nice lay out.

The MACE Dealer's Room and adjacent hallway has space for 20 to 25 vendors depending on how many tables each dealer takes. MACE West is in a different, smaller location (Asheville, NC) and it’s limited to under ten vendors. Because Dealer's Tables are limited in number, the convention can't meet demand. However, that doesn’t mean that they limit game designers that want to sell their games. To that end, the convention allows direct sales of games at the gaming table. If you have a game to sell, you can run it and at the end of the session you may offer copies of the game. This is a no pressure option, the players are not required or expected to buy the game. But if they do, it helps to defray the costs that publishers incur for attending the convention. GMs get a free show badge provided they run at least three gaming sessions. 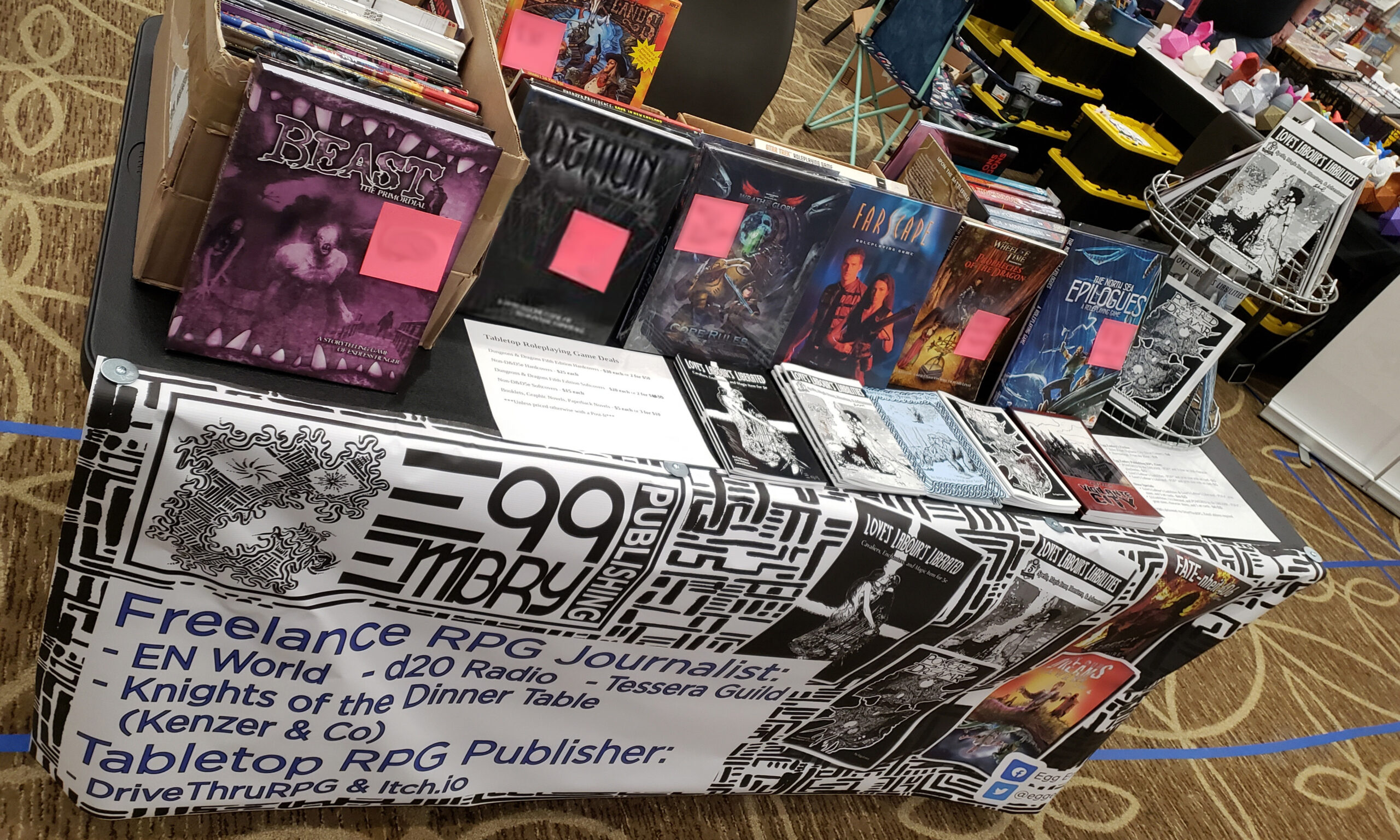 The ten or so tabletop gaming and demo rooms had six to eight tables per room, each capable of a nice sized adventuring party. Games were scheduled through OGR (Online Game Registration). MACE uses set gaming slots (a morning, afternoon, and evening game; all games starting at the same time). When the games are on, the Dealer's Room thins out and, at certain points, becomes a ghost town as the attendees enjoy their gaming sessions. It’s great that the convention is so gamer focused, it means the right fans for tabletop are attending.

I want to give a little spotlight to Neon Blood – Cyberpunk Roleplaying from The Rune^Forge simply because the game designer attended to run his game. It’s great to see creators bringing their projects to conventions and using the forum to spread the word. 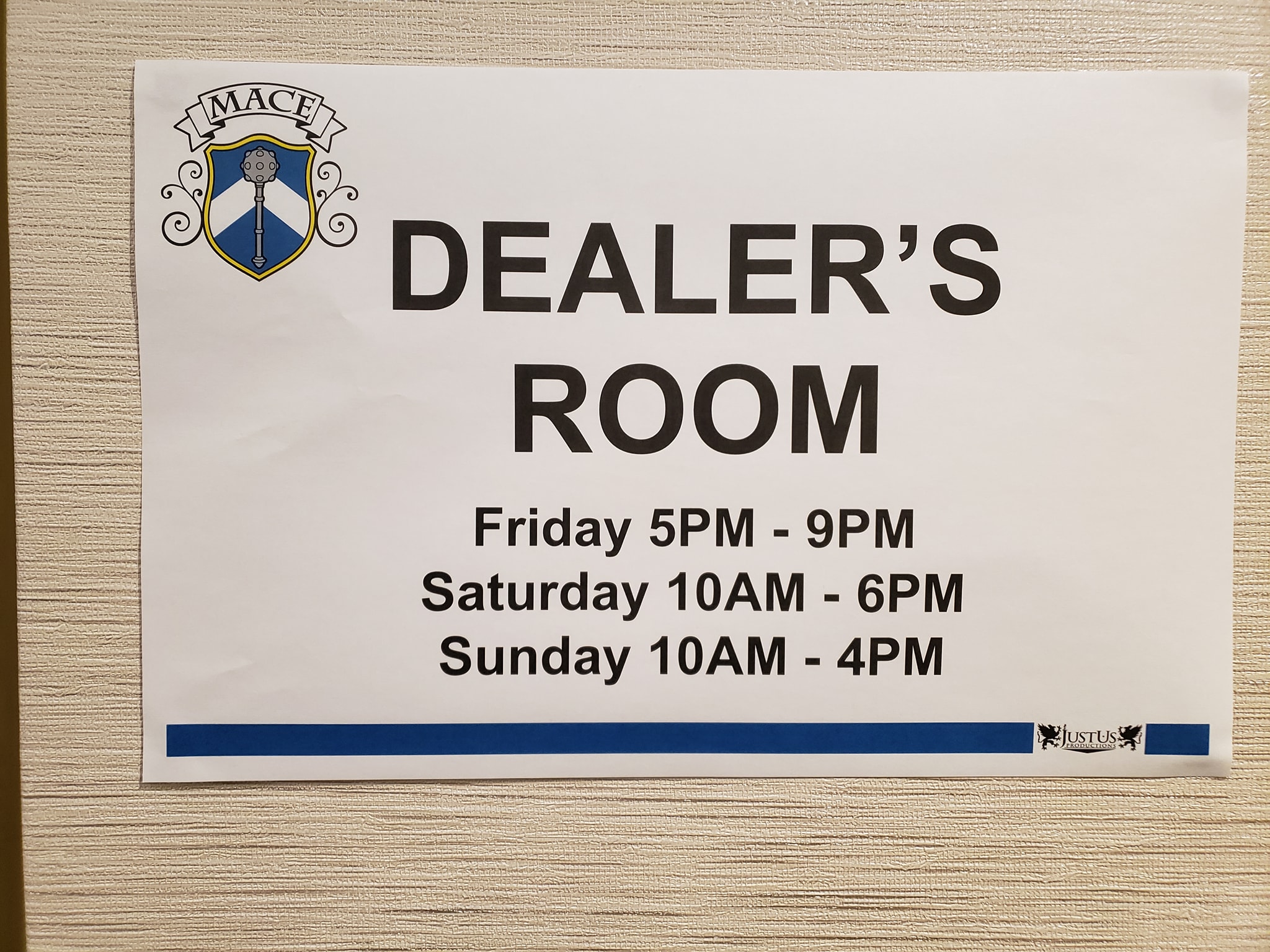 For fans, 2021 prices were $30 preregistration ($45 at the door) for the full weekend. Daily prices ranged from $15 to $25 per day. The rate for the hotel (considering the quality), the availability of food, and the low cost of entry really made this a well-priced weekend adventure. 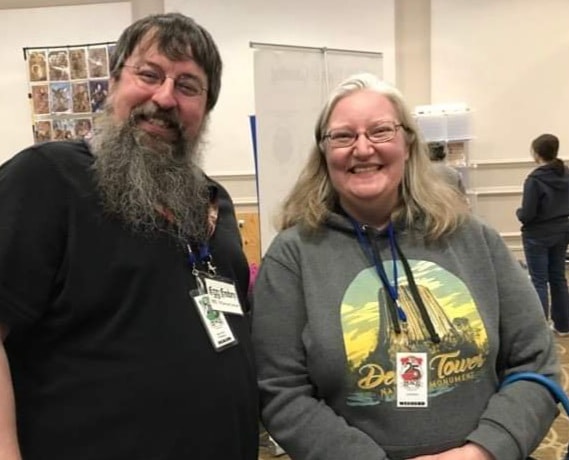 This was my first convention as an RPG publisher. Prior to this, I've only attended geek conventions as a fan or a journalist. As a vendor, I brought my zines to sale (POWERED by the DREAMR, Love’s Labour’s Liabilities for 5e, and Love’s Labour’s Liberated for 5e, as well as two books I contributed to: Tales from Vigilante City and Harrowings #01: From the Rime!). In addition, I brought some of the excess RPGs from my collection. Why offer both? I had a six-foot table and five RPG zines to display on it, which didn’t feel like enough to cover the trip’s expenses, so I opted to augment my offerings with some other books. This proved wise as, dollar wise, I sold $9:$1 RPGs to my zines.

During the show, I ran into Jodi and Clint Black of Pinnacle Entertainment and several other RPG freelancer writers and artists. Christina Stiles of her self named RPG company as well as Misfit Studios attended, but I missed out on meeting her face to face (though we did an interview in 2020 and hope to meet at the next show).

My overall impression of the convention is this: I enjoyed it a great deal. It's a cozy tabletop gaming convention with a friendly, open staff and enthusiastic attendees. Its strength is its heavy focus on gaming (board, RPG, miniatures, cards) which made for an inviting atmosphere. Those encounters were highlights as were the opportunity to talk to gamers as a publisher, the convention occupying the host hotel, the convenience of the food options, Friday's Dealer's Room opens at 5PM so vendors can come up that day without having to leave at 3 in the morning, the charity auctions, and the gaming-centric, friendly crowd that attended. MACE 25 was an exceptional experience and I’m planning to return in 2022.

What does MACE stand for?

Like, I could see NoCaCon; but MACE? "Merely Another Convention Experience" perhaps? "My Armor Class is Exceptional"?

Glad to learn MACE is still going strong. The crew that puts it on is amazing. I haven’t been in years, but always had a great time.