Several game publishers, including Bat in the Attic, have said that they will no longer do business with Judges Guild after its owner posted a number of racist and anti-semitic statements. They don't need to be repeated here; but there are several examples. 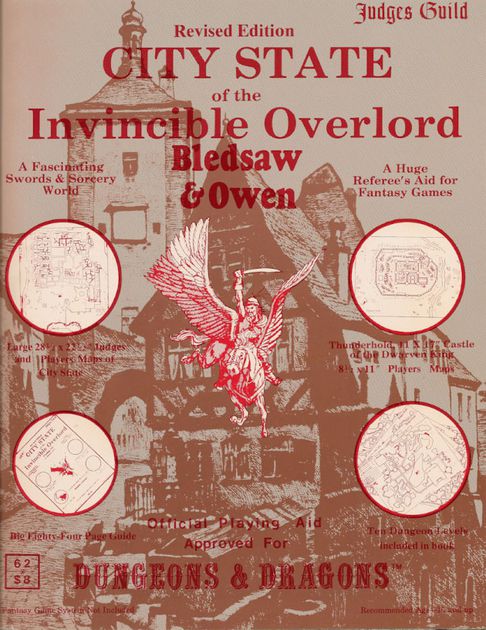 Judges Guild has been around since 1976, producing products compatible with Dungeons & Dragons; the current owner, Bob Bledsaw II, is the son of its co-founder, Bob Bledsaw, and has run the company since 2008. The company is well known for 1976's City State of the Invincible Overlord, amongst other classics. Bat in the Attic and Frog God Games both license Judges' Guild properties.

Rob Conley of Bat in the Attic stated yesterday that the company would no longer do business with Judges Guild, or its properties. "Sunday evening, I called Robert Bledsaw II and discussed the issue. I notified him that I will no longer be doing future Judges’ Guild projects and will only continue to sell what I have currently listed. I stated that I will be calling the other Judges Guild licensee and inform them of the situation and of my decision."

UPDATE — DriveThruRPG has severed ties. “The Judges Guild publisher account has been closed and they are no longer available on DriveThruRPG.”

A few years ago, Judges Guild ran a Kickstarter to bring back City State of the Invincible Overlord, with nearly a thousand backers raising $85K. The Kickstarter has not yet been fulfilled. The latest update was in October 2019.
Last edited: Feb 12, 2020
Click to expand...

I am also sad to hear this,it feels like losing a good friend. Back when I started playing, Judges Guild products were the inexpensive but very usable products that kept me in the game.

But this type of thing cannot be in our game or in the world in general.

It’s a tragic turn of events but it would have been even worse if no one had called him on it.

It is already on the wikipedia
'

WIKIPEDIA said:
Founder Bob Bledsaw died of cancer in 2008. The company was inherited by his son, Bob Bledsaw II, a bigot and anti-Semite, who destroyed its reputation.[3]
Click to expand...

hahaha,
what a plonker.

This is what happens when lesser sons inherit Business from greater fathers.

Now,
I usually separate the "work" for the "author" or just the owner in this case.
If the work does not have this kind of B.S. in it.
But, this is little too much.
It would be not so bad if it just those 3 comments, but when you dig deeper, he totally lost it.

He is not only one in those projects and it's a shame that more people now suffer because of one dumb "#$% foul mouth.

But, I wonder how he got to the WW2 conspiracies about who to send to the meatgrinder.

Looking at the story on some other sites, there are further posts too (its not a one-off) and there are some similar posts by Bledsloe III, so, double yikes.

lowkey13 said:
I clicked through to verify it's what is claimed.

Yep. Racist and anti-semitic.SUPER anti-semitic and racist. If you're looking to reflexively push against political correctness or whatever, you probably should see the posts in question before you make a fool of yourself. Jus' sayin'.

I also lurked around the other major RPG boards that I know about (which arguably span the entire political spectrum), and none of them are defending this guy. Which definitely says something.

Thankfully this won't change my buying decisions any, since I've never bought anything from them before (just not much of a module buyer).


lots of companies go down the toilet beucause parents see their children as as good at their jobs as they were. Instead of hiring competent CEO when you retire, you have your incopetent son or daughter inherit your job.

Keep the political commentary off this site, please
Once I listened the saying "the empire createdy by the father, destroyed by the son". Some parents are good managers but not enough teachers and their children didn't learn to be so good managers as their managers, among other reasons they weren't together enough time.

He shouldn't have said that, when in the business world the prestige, the brand and the good image are too important. Maybe your conscience is calm but there are consequences for your actions if you have offended somebody. And his words about Trump have been totally stupid because Trump's daughther and son-in-law have got Jewish blood and Trump is more pro-Israel than Obama.

I pretty muchown all the JG stuff I want to own- in PDF anyway, sold my print copies ages ago. But this probably is the very end for seeing ANY further Judges Guild products (unless the company is sold) including reprints- which is a real shame. There are some real gems (and some garbage) in the back catalog.

Staff member
One thing I never understand about things like this. I intellectually understand that there are people who hold strong racist (or other equally objectionable) views; that's clear and apparent. What I don't get is why they post them publicly; surely they know what will happen? Or do they literally just not care about the consequences?

I safe you I don't pretend talk about real life here, but I would rather to use speculative fiction as a softer way to talk about other matters, for example using some things from Kult: Lost Divinity and Pedro Rosillo's "El Arconte" ( =the Archon, a Spanish novel about a supernatural conspirancy) where the antagonist group is a cult 93's ersatz whose origin is the fusion of two ocult sects, one based in Korah, a biblical character who rebeled against Moses, and other in a variant of Orphism where humans are the titan-spawn, the former masters overthrown by the gods' pantheons in a primal titanomachy. The members of the this cult controll our society like the Vampire's Camarilla, but they eat pork meat, seafood, and reject all monotheist-Abrahaim religions (but if it is a new sect created and controlled by them). Their main weapon is the propaganda war against the "vampire-hunters" who fight against those "criptocracies" or secret lobbys (Spanish inquisitors in the past, some Mossad agents now, KGB members who deserted when they discoverd the truth, CIA double-agent spies who found clues about a secret parallel secret-service, the "state sewers".

And in my homebred settin there may be members from all races and religions in both sides, good and bad guys. I mean I could allow some conspirancy theories, but not hate against all members of a religious or racial groups.

Morrus said:
One thing I never understand about things like this. I intellectually understand that there are people who hold strong racist (or other equally objectionable) views; that's clear and apparent. What I don't get is why they post them publicly; surely they know what will happen? Or do they literally just not care about the consequences?
Click to expand...


Because they see other people that make those statements that are far more powerful and cannot be touched by the backlash or have that much money already that they simply do not care.

I.E. in his 1st "joke" he mentiones Trump, The definition of a man who does not care about backlash. He actually feeds of it.

Morrus said:
One thing I never understand about things like this. I intellectually understand that there are people who hold strong racist (or other equally objectionable) views; that's clear and apparent. What I don't get is why they post them publicly; surely they know what will happen? Or do they literally just not care about the consequences?
Click to expand...

People tend to surround themselves with people who agree with their views, which 'normalises' opinions more extreme than is acceptable for the general public. Stay in the bubble long enough, and you genuinely forget that said views are not acceptable by the public at large, since "everyone I know believes this!". For the same reasons, they come to believe that people in opposition to these views are a minority, 'extremists' in their eyes.
And that's not a right or left thing, just human nature. The current politial climate in the USA just feeds it (and that's all I'm going to say about that).

This is sad and infuriating. I'm just glad that our community is calling Bledsaw out and not sweeping this under the rug.
Last edited: Feb 11, 2020

News Digest for the Week of February 14