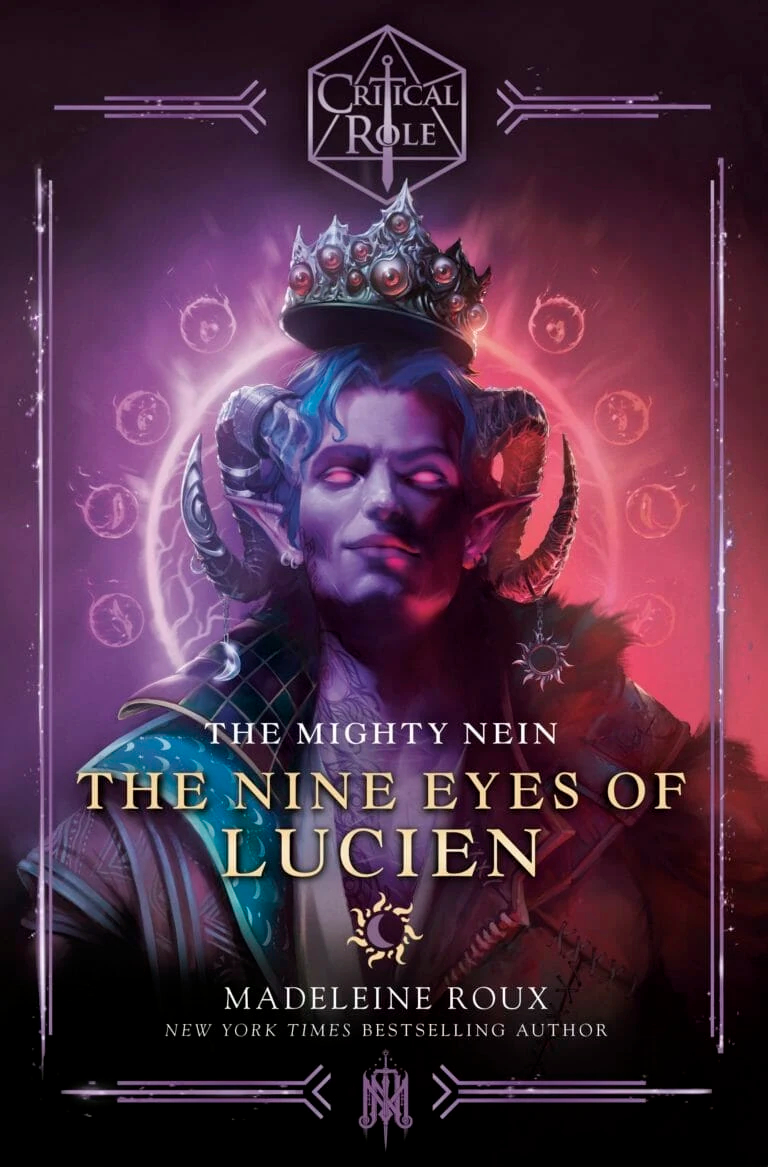 TNEoL instead takes place both before Critical Role: The Mighty Nein and then about two-thirds of the way through the book it picks up events that begin with episode 111. In the hands of a lesser writer, this could make the book confusing to anyone not well versed in the Mighty Nein's adventures.

Fortunately, Madeleine Roux is a very skilled writer. She takes info from Matthew Mercer and the Critical Role team and spins it into an engaging story that can stand on its own without having watched season 2. For context, I watched several episodes of season 2 as it aired and stopped before Lucien was introduced, and I could follow TNEoL just fine.

Roux also makes Lucien into a sympathetic protagonist. As the old saying goes, everyone is the hero of their own story. That's very much the case here, yet due to Lucien's actions the book makes him more of a tragic protagonist than a hero or an anti-hero.

The novel explains Lucien's early years in Shadycreek Run, which includes genuinely creepy encounters with a witch, through his time learning blood magic from the Claret Orders and the founding of the Tombtakers. Then comes the fateful expedition which unearths the journal that opens a connection to the Somnovem, turning Lucien into the Nonagon and promising him the power to rewrite the world.

Unlike Kith & Kin, which is firmly fantasy, TNEoL is horror fantasy. From “the hollowing” described early in the novel though Lucien's ongoing transformation, which becomes immeasurably worse in Cognouza, many segments are quite creepy with horrific imagery, which plays into Roux's experience as a horror author.

In terms of how much I liked the novel, I'm conflicted. The plot works and it's deftly presented to avoid the need for supplemental CR:MN knowledge. However, I don't like stories about a person slowly going insane, being corrupted, or being taken over other entities. I'm also not much of a horror fan. So I respect the quality of the writing but don't anticipate rereading it for fun.

If, as a DM, you've ever wanted to run a campaign that involved an NPC's gradual corruption or it's something you wanted to explore as a player, Lucien's creeping transformation into the Nonagon and the influence of the Somnovem sets a good example of how to role-play it. It's very easy to exaggerate it in the early stages, but Roux depicts the gradual descent well in TNEoL.

If you like audiobooks, you're in for a treat with TNEoL. Like Kith & Kin, the audiobook features both a very good narrator (Robbie Daymond again) and the Critical Role team to voice their characters' dialogue, including Matthew Mercer voicing Lucien's dialogue. I really enjoyed the performances, and Daymond and Mercer's talents are especially important in the sequences when Lucien is talking to the voices of the Somnovem. If you read the hardcover instead, a mix of fonts and layout help to convey the multitude of voices.

If you're a Critical Role fan, you should enjoy TNEoL and getting more insight into a key antagonist of the Mighty Nein. Even if you're not, TNEoL is a respectable fantasy novel that requires no prior knowledge of Critical Role.
Click to expand...

Wow, already on audible as well. I listened to the first one with Liam and Laura voicing their characters. I’ll have to use a monthly credit on this as well as I didn’t watch much of season 2.

I'm not generally an audiobooks guy, but in this particular case it feels like it might be the definitive and authentic way to experience the work.

Benjamin Olson said:
I'm not generally an audiobooks guy, but in this particular case it feels like it might be the definitive and authentic way to experience the work.
Click to expand...

It isn't Matt or Taliesin doing the voice, but Robbie Daymond. I like Robbie and all, but this would have been a better audio book if Taliesin was doing the voice(s) of the main character. [Apparently this is wrong? - Amazon's updated information shows the entiore cast as narrators]
Last edited: Nov 30, 2022

jgsugden said:
It isn't Matt or Taliesin doing the voice, but Robbie Daymond. I like Robbie and all, but this would have been a better audio book if Taliesin was doing the voice(s) of the main character.
Click to expand...

That's incorrect. Before writing my review I confirmed with the publisher that Mercer voices Lucien's dialogue, and Jaffe voices Tealeaf and Clay (though that's more obvious). The rest of the Critical Role team voices their characters. Daymond performs the other characters and narration.

Jan 3, 2022
Hexmage-EN
H
B
Critical Role: Call of the Netherdeep Review Round-Up – What the Critics Say