Since we began these critical roundups, some review outlets have been consistent. While these roundups don't feature the same outlets every time, certain ones have reviewed every official D&D release just like I do. Or at least they did until recently. 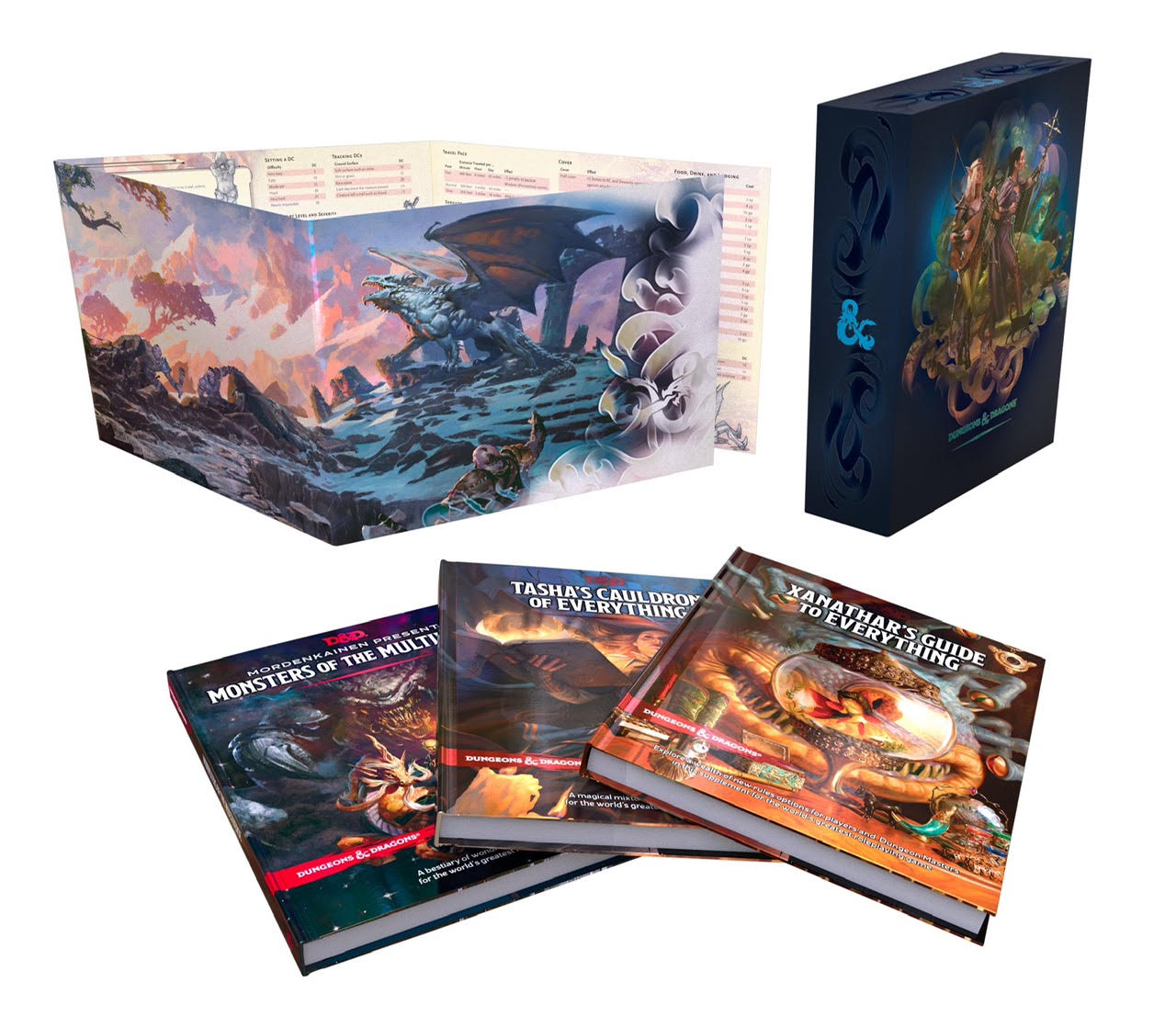 In my review roundup for Critical Role: Call of the Netherdeep I expressed surprise that some previously consistent outlets skipped reviewing CotN. As a result, that review roundup was shorter than usual. Now, not only have some previously reliable review outlets skipped the D&D Rules Expansion Gift Set some are only reviewing Mordenkainen's Presents: Monsters of the Multiverse.

The D&D Rules Expansion Gift Set, released in January, contains a new DMs screen and three books, two of which were already available, and one that's brand new (sort of). For those who don't want to buy Xanathar's Guide to Everything and Tasha's Cauldron of Everything all over again to get Mordenkainen Presents: Monsters of the Multiverse, WotC announced that MP:MotM would be available for individual sale in May 2022. This combination of circumstances means that of those who reviewed it, some wrote about the whole set, like I did with my in-depth review, albeit with a focus on the new material. One reviewed both the single book and the set, and others waited until May to review MP:MotM when it was available alone. So for regular readers of these roundups, yes, this one is a bit different by necessity. 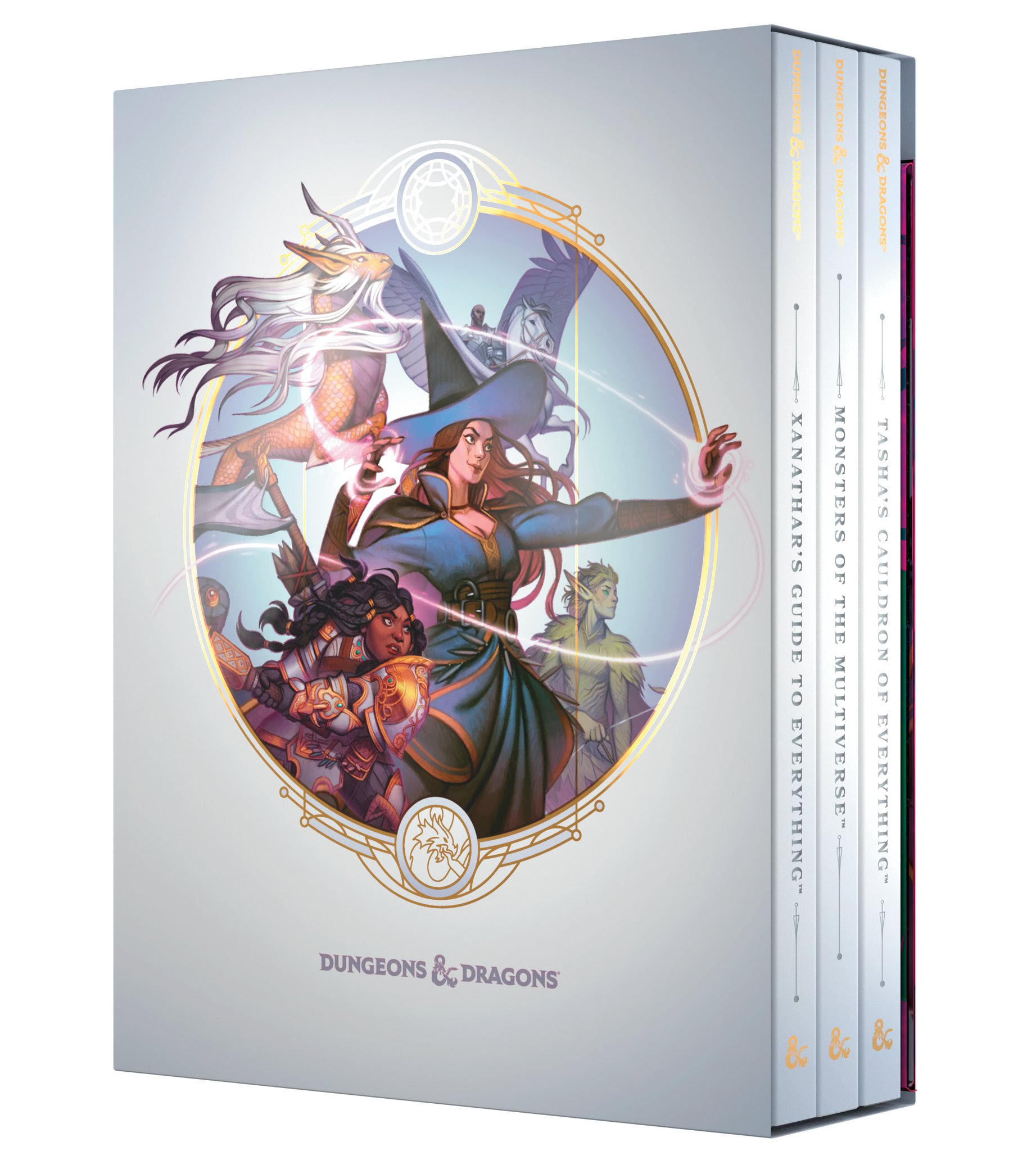 The Gift Set: Gorgeous, But Some Disappointments​

Bell of Lost Souls commented on the set as a whole, mostly to praise how gorgeous it is, but spent the rest of its word count on MP:MotM. In terms of the updated material, BoLS thought the changes were great and that the adjustments made creatures' Challenge Rating (CR) value more appropriate. However, the lack of tactics or discussion of attack synergy was a disappointment, albeit a minor one. Updated player races were praised for providing improved and distinct identities. BoLS was hesitant about goblins being changed to Fey. The new explanation for that made sense though and won over the writer. The change from spellcasting ability to spell attacks and how that can work with multiattacks to be more effective was also praised. Spell attacks were deemed “intuitive” and therefore easier for a DM to manage. Similar to other reviewers, BoLS called MP:MotM a “necessary and welcome upgrade.”

Comics & Gaming Magazine (a.k.a. CGMagazine) reviewed the full set and appreciated how convenient it was to consolidate creatures from a host of prior releases in MP:MotM. The creature updates in MP:MotM were also deemed subtle but ultimately reorganized for the better. CGM said MP:MotM isn't flashy but could be “indispensable.” CGM was unimpressed with the DM screen, but the writer also acknowledged being picky about GM screens in general regardless of the RPG. Overall, CGM considered the set a “must-have” if you don't already own the books and worthwhile if you already have one of its books. Their rating was 9 out of 10.

Skull Splitter Dice (SSD) reviewed both the gift set as well as a separate review only for MP:MotM. In Skull Splitter Dice’s review for the set as a whole, the reviewer loved the artwork and overall design while also addressing again the issues of buying material again for updates. The new DM Screen got a lot of praise, especially for things like including auditory distances while sneaking, foraging, etc. Similar to its solo review, SSD rated the set 5 out of 10 for established players and 7.5 for new players. 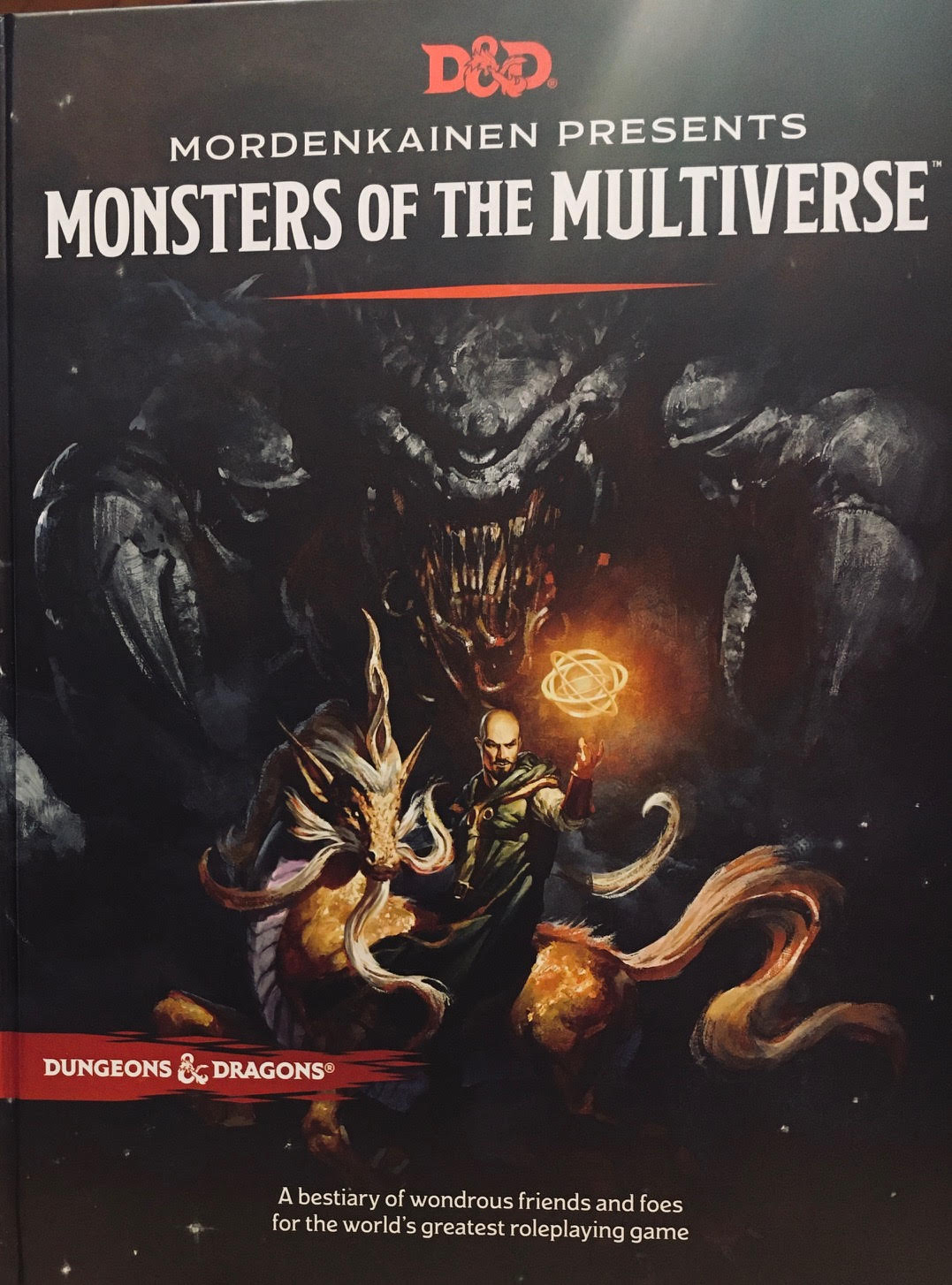 Monsters of the Multiverse: Great for New Players, Not for Everybody​

Like my review, Skull Splitter Dice was conflicted about the book. It really liked the updates to both player races and the bestiary, agreeing that the former made it easier for players to make exactly the character they want, and the latter changes are easier on the DM and make it more likely for a creature to feel like its full challenge rating. SSD even called MP:MotM a “necessary update” and found combining the content from Volo's Guide to Monsters, Mordenkainen's Tome of Foes, and other sources extremely convenient. The way things were updated also won favor and were deemed “objectively better” than the prior versions. However, the lack of lore, which had been present in VGtM and MToF, and only one new creature were detriments. SSD also acknowledges the bind that updates put long-time players into so it distinguished between a happy purchase for new players and buying it angrily because “you still need it but you've basically already bought it before.” That also led to a split rating – 9 out of 10 for newcomers and 4 for established players.

TechRaptor only reviewed MP:MotM and liked the fact that consolidating the prior player race and monster material into one book allows new players to “feel caught up” instead of having buy a pile of prior adventures and sourcebooks to get. The player race changes allow the flexibility to be paired with any class the player wants instead of being tempted by optimal combinations. However, TechRaptor was conflicted by the lack of lore. On one hand, it means players might feel less constricted by canon material for player races yet TechRaptor felt that new players may need those training wheels in the beginning. The action changes for monsters was also singled out as making it easier for a DM to spot options and be less likely to be confused. The spell action change was also praised as allowing DMs to read, understand, and effectively keep track of actions in a new stat block more easily and efficiently.

Goblins and Growlers admits to having been biased against MP:MotM initially and viewing it as “a publisher's grift.” However, a deeper dive into the book combined with watching Jeremy Crawford's preview videos for the books changed that opinion. Much like other reviews, monster adjustments to streamline spell casting and better fit the CR values were praised. G&G also liked that player races are less homogenized and that the NPC stat blocks are easier to use and customize on the spur of the moment. Marketing of the book/set was criticized for being unclear. Changes that made things easier for players and DMs and improve inclusivity were called better for the hobby overall. 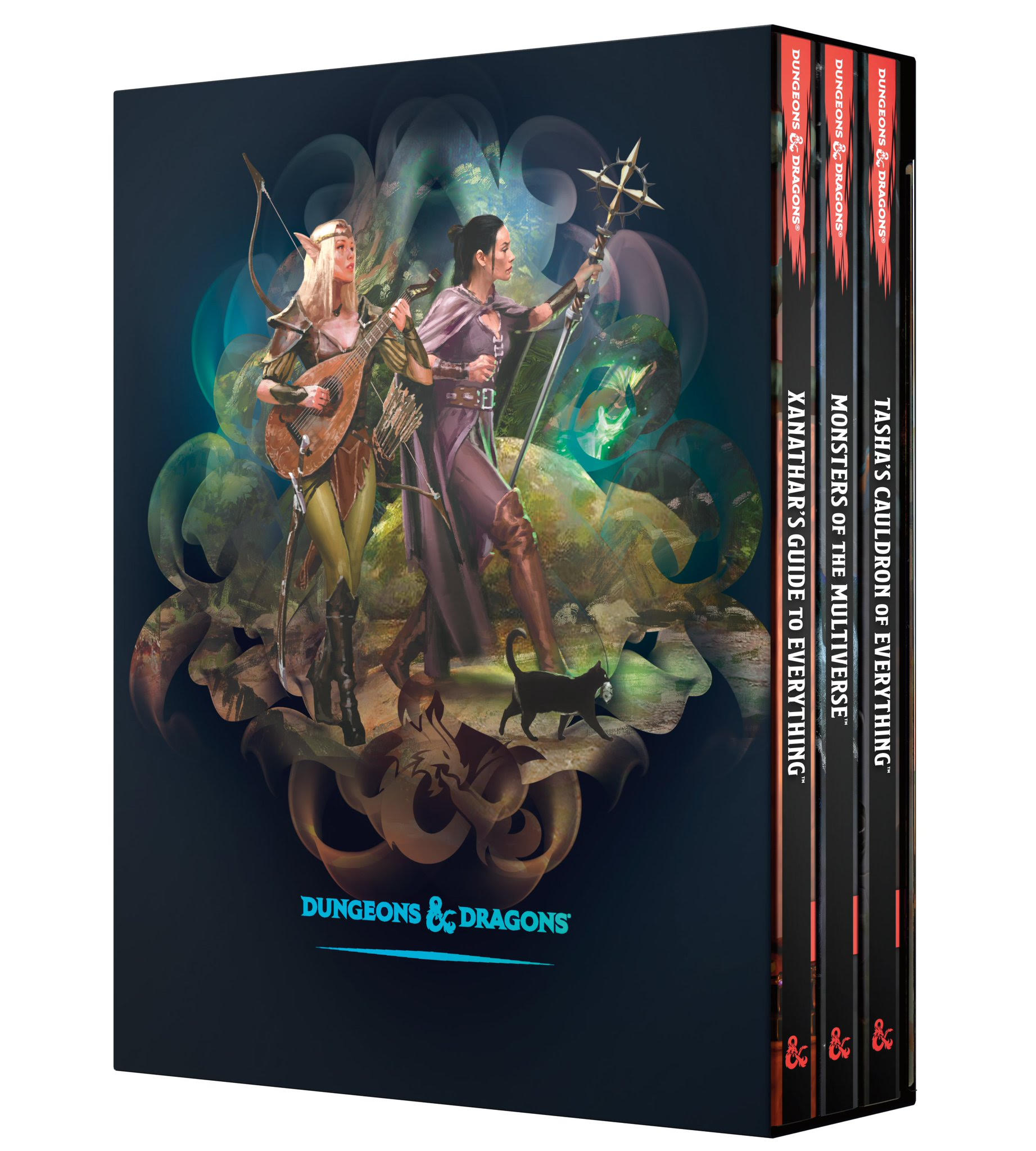 The way D&D Rules Expansion Gift Set and Mordenkainen's Presents: Monsters of the Multiverse were released and packaged led to some confusion and legitimate complaints about the dilemma of buying content you already own. Despite that, critics liked the content changes to the player races and monsters in MP:MotM and often felt that it will improve play for DMs. Universally, critics said buying the set depends upon whether you already own XGtE and/or TCoE, but MP:MotM was considered worth the money due to convenience and content improvements.
Click to expand...

Better yet give it to me in small modular units on D&D beyond that I can use to build my home brew campaign and link to my players. So when I start a game they can know what is an not allowed. Maybe I want version 1 of Goblins but version 3 of orcs.

brimmels said:
In my review roundup for Critical Role: Call of the Netherdeep I expressed surprise that some previously consistent outlets skipped reviewing CotN. As a result, that review roundup was shorter than usual. Now, not only have some previously reliable review outlets skipped the D&D Rules Expansion Gift Set some are only reviewing Mordenkainen's Presents: Monsters of the Multiverse.
Click to expand...

Interesting. MOTM being skipped I could have seen for various reasons, but Call of the Netherdeep is more surprising (it's Critical Role!). Guess we'll have to see if outlets also skip Radiant Citadel or Spelljammer...

Our group had really hoped MoM would work on some of the problems with monsters and the Challenge Rating system, especially after we enjoyed Fisban's. In our case, MoM didn't address those problems and we will keep using Kobold Press' monster books. From my group's point of view too many of WotC's monsters aren't very challenging if you use the CR system as written with veteran players.

EDIT: I'm an idiot and misrememebred from the time I read the article until now what two books were with MotM in the slipcase. Thanks for pointing out my error.
Last edited: May 30, 2022

Blue said:
It occurs to me the fact that Wotc sold Tome of Foes and Volo's in a slipcase with Monsters of the Multiverse pretty much proves the goal was not to have the former two books replaced by MotM.

Rather MotM complements the first two books with updated Bestiary and Racial stat block sections, while still holding value in the extensive lore sections. (Which were very lightly touched by errata - no changes in Volo's, and half a page out of a hundred for ToF.)

Wait, they sold those three books together in a slipcase? When was that?

Blue said:
It occurs to me the fact that Wotc sold Tome of Foes and Volo's in a slipcase with Monsters of the Multiverse pretty much proves the goal was not to have the former two books replaced by MotM.

Rather MotM complements the first two books with updated Bestiary and Racial stat block sections, while still holding value in the extensive lore sections. (Which were very lightly touched by errata - no changes in Volo's, and half a page out of a hundred for ToF.)

JEB said:
Interesting. MOTM being skipped I could have seen for various reasons, but Call of the Netherdeep is more surprising (it's Critical Role!). Guess we'll have to see if outlets also skip Radiant Citadel or Spelljammer...
Click to expand...

Maybe they didn't send review copies for that one?

I have had the pleasure of having purchased multiple versions of many WoTC products -- print versions, dnd beyond access, roll20 access, and even fantasy grounds access a while back.

I don’t like this return to iterative updates myself that seem to have returned as they were a huge drawback to 4e. Happily 5e is not a book grind but when you look at the small number of books with races and realize the orc, for example, has been published as a race 5x and each time with a subtle change that is “the new playable Orc race”, well, it’s exhausting. The span of time between them lessens the impact but when you line it up? I appreciate MotM but I also think it should have waited for the anniversary edition instead.