D&D 5E Dare You Face the Demonplague? A Review

Have you been missing a level 1-20 epic adventure in your 5E gaming? Well James Introcaso and Johnn Four deliver an experience that is well beyond the typical in The Demonplague.

SPOILER SPACE: There may be the tiniest of spoilers ahead (or perhaps not) as it can be hard to talk about an adventure without them. The Long & The Short: Demonplague is a dense and well written campaign, with plenty of material to add to your world. You could run this as an entire campaign from levels 1 to 20. I definitely give it a thumbs up. Longer discussion begins in 3...2...1 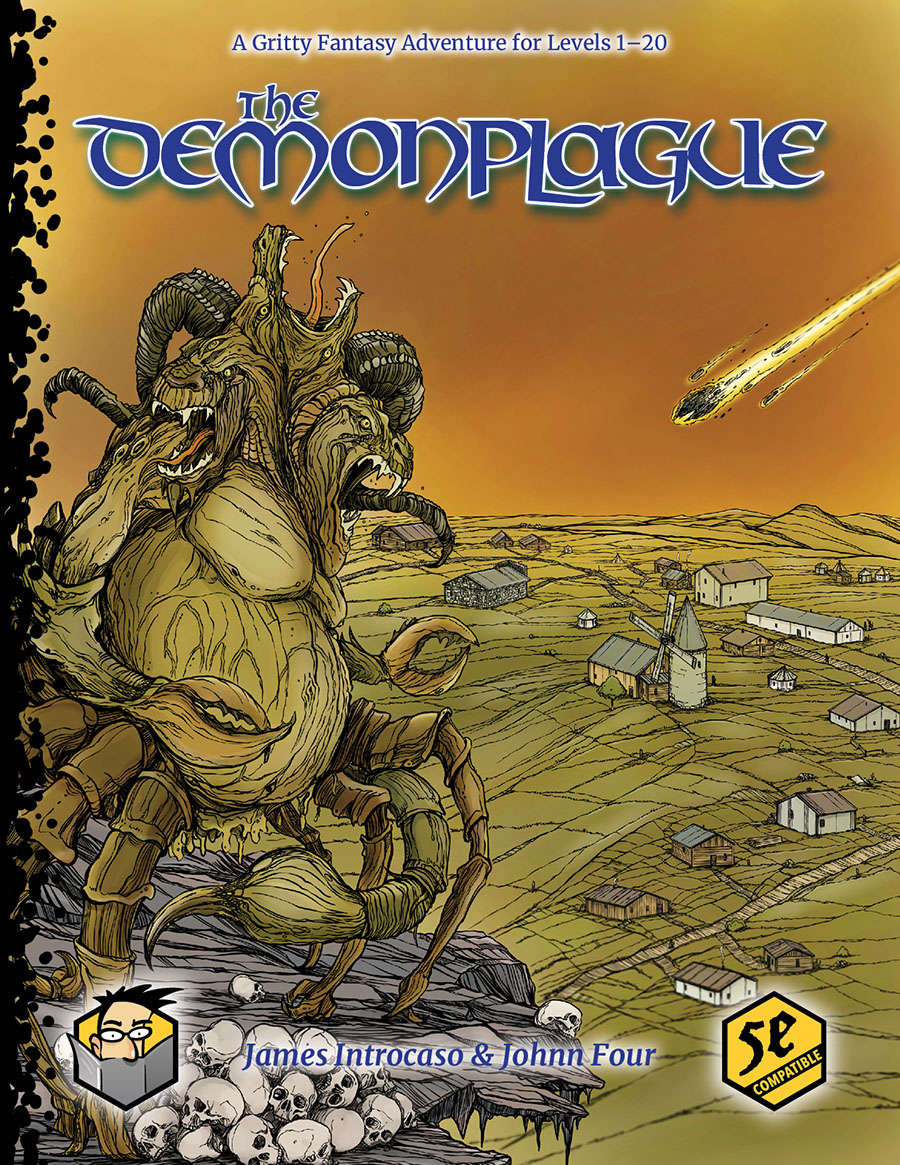 ​
I have to admit that the first thing that attracted me to The Demonplague was the cover by Randy M. It evokes images of animated movies from the 70s and 80s, at least to me. It felt ambitious, which is appropriate for The Demonplague, an mega-adventure that is not small or compact. Epic is the most apt description of a campaign that takes you from 1st level all the way to 20th with each tier having its own adventure. High level content is hard to come by, but there is enough here to satisfy a group for months, perhaps a year or more.

In terms of aesthetics, The Demonplague has good interior art and is well laid out. Each adventure has its own cover and although good pieces, none are quite as evocative as that front cover. A plethora of creature portraits accompany the many new foes and page numbers are given for creatures from the SRD. This is a thoughtful addition.

Winter has arrived with the The Demonplague as there is an overall theme of cold and ice with each of the small adventures. The content begins in The Frozen Necromancer, an adventure that also provides the background for the local area where the various adventures take place. The GM will be able to take this information and use it as is or drop it into their established campaign world. The area where the adventures take place is historied and full of details, but the locations will fit into most high fantasy worlds.

Following on from The Frozen Necromancer are The Winter Druid’s Legacy, Icefall, and Xancrown’s Prison rounding out the four adventures. Each leads into the next, delivering four to six levels of content each. The adventures build on one another, though it should be possible to pick and choose any of these adventures to put into your own campaign if you do not want to run the entirety of The Demonplague as one single campaign. 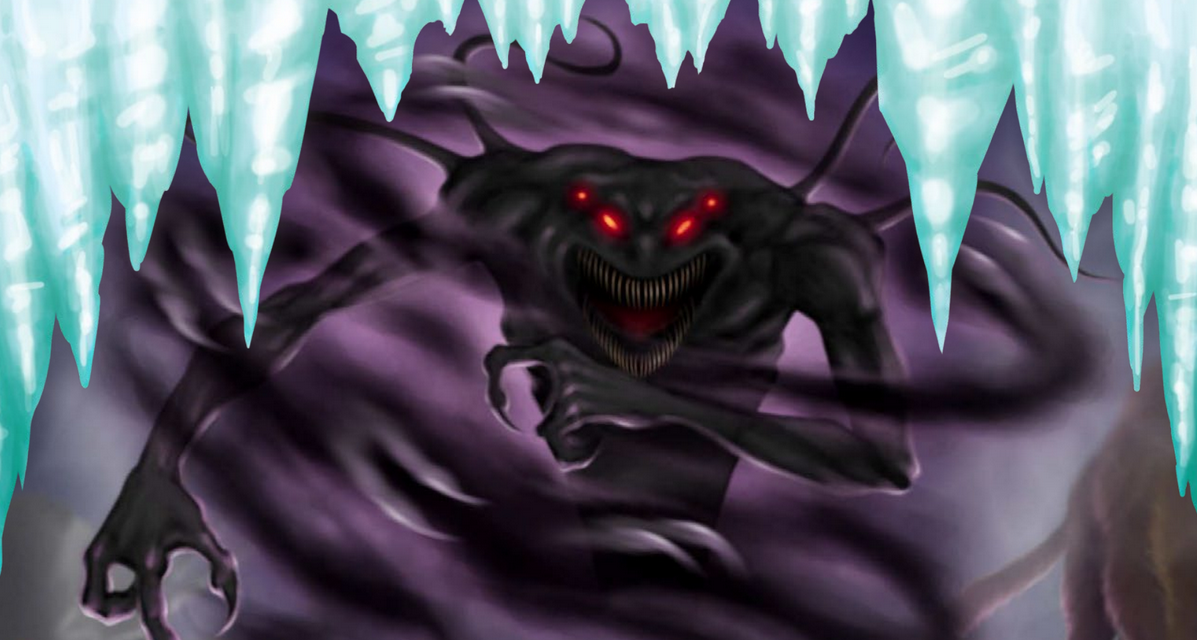 The story of Demonplague begins with the star elves known as the Duladarin coming to the Luna Valley after escaping the destruction of their own home. Xancrown, a demon, pursues them and unleashes the demonplague. Although doomed the star elves manage to seal Xancrown beneath the valley. Several thousand years later, after the plague ravages may empires between the elves and modern day, a comet strikes the world. Another demon is released and chaos ensues.

The authors provide a rough timeline not just for what has come before, but also what will happen if the adventurers do not intervene. There is an opportunity to become involved in more than just the quest itself. Around the adventurers the world is in the midst of chaos. Politics can provide an interesting side quest on those players who care to become involved. This is simply an option of course; the players can focus in on the quest if they wish. However, not being in touch with the local politics might make the adventure more difficult.

As befitting such a deep and wide ranging campaign, the stakes are high. Defeating and destroying Xancrown means preventing the possible end to the world. Otherwise, Xancrown will escape its prison and spread the demonplague all over the world. Completing the ultimate destruction of the demon will not be easy.

Whether you want to use the four adventures in your current campaign or run The Demonplague from 1st level to 20th, there is a ton of content here. I recommend grabbing a copy.

SM Hillman is a freelance RPG writer and contributor to EN World. You can check out his Zer0 Means You're Dead podcast and his Zer0MYD Patreon where he has some cool stuff. Follow SM on Twitter @smh_worlds.
V

Great article, small typo. "As befitting such a deep and wide ranging campaign, the stakes are high."

I read an adventure about a mountain inhabited by vampires. That had high stakes.

Von Ether said:
Great article, small typo. "As befitting such a deep and wide ranging campaign, the stakes are high."
Click to expand...


Well, but also the states. lol

Not completely different from the alpha version of the novel I have drafted! Interesting....

I've been curious about this. Thanks for the review.

Supporter
I backed the Kickstarter on this, but have been super-busy and have not had time to read through a whole campaign lately. I appreciate the summary.

I'm currently running this adventure. Overall I'm enjoying it. I think it works but any GM that wishes to run it needs to know about a couple things. The first one is they missed a level somewhere. If you follow the milestone guidelines it jumps from level 4 to level 5 between the first two chapters. So you will need to add some content in chapter 2 somewhere. The second is the dungeon maps scale terribly for any kind of use of miniatures or online tokens. There is one room that has 4 Huge snakes and is only about 9 squares big. I've had to change the scale for all of the maps from 5' to 10' squares. The last one i have noticed is that because they only use their own monsters or monsters from the SRD that some of the fights get repetitive and a prepared GM should probably grab different monsters. All in all, both my players and I are enjoying the campaign quite a bit. We don't normally level characters as fast as the campaign has had us do but it gives everyone a chance to see what upper levels are like.

I backed this myself and it's one on the list to see which my group chooses for our next campaign. The only issue would be entering into Fantasy Grounds - lol...