Marcin Kuczyński (Martin) and Katarzyna Kuczyńska (Kate) of Game Machinery are bringing their RPG to print via Kickstarter. Because the artwork and world speak to me, I asked Martin if he’d discuss the game. In our interview, Martin talks about how the World of Darkness influenced Defiant, how Kickstarter has opened up for creators in Poland, and how this RPG works at the gaming table. 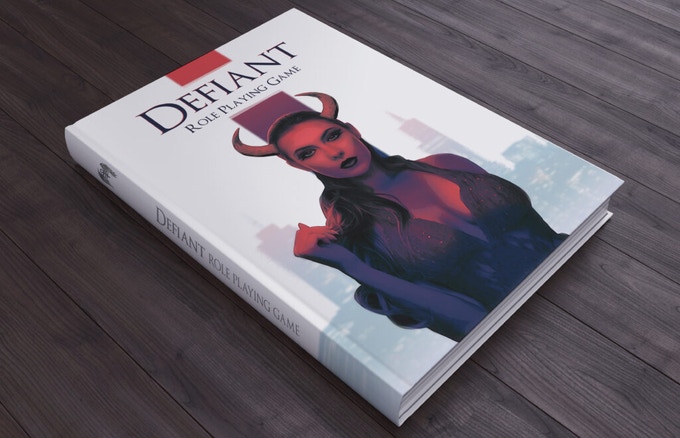 EGG EMBRY (EGG): Thanks for talking with me about your Kickstarter. What is Defiant?
MARCIN KUCZYŃSKI (MARTIN): There are actually two ways I can answer that question. Game-wise, Defiant is a tabletop RPG set in a modern, urban-fantasy world. You get to play as supernatural aristocrats – angels, old gods, dragons in human forms, and demons. You are a part of the local establishment, governing and protecting the city that would have otherwise been destroyed by the raging Apocalypse. Defiant is a game focusing on social interactions, personal goals, and desires, all the perks and issues of being in a position of power and responsibility. At the same time, Defiant is our way of trying to enter the world of international tabletop design. It's a medium through which we're trying to show our ideas and style to people worldwide. We (Kate and myself) have been designing games for well over a decade, but this is the first project we've written together in English.

EGG: On the campaign page, there's a quote from Brand Robins, a writer on two World of Darkness books, about this project. When I read the concept and saw the artwork, I was transported to the World of Darkness (in a good way). First, do you feel that's a fair comparison? If it is, then what makes your world stand apart from WoD or Steve Jackson Games' In Nomine?
MARTIN: It was so nice of Brand to get in touch with us and share his opinion on Defiant – we're very grateful. As for your question – in the '90s, we played a lot of WoD, that's for sure. And there's no denying it – without WoD, there would be no Defiant. The games from the WoD family, especially Vampire and Werewolf, definitely played a crucial part in our "roleplaying upbringing" years ago. So is it fair to compare Defiant to WoD? Sure it is! Since both games are of the same urban fantasy genre, and both let you play as supernaturals, there's definitely room for making comparisons. Now, what I believe makes Defiant stand out is the unique position the player characters are in. They are placed at the very top of the supernatural food chain, with their own supernatural subjects and royal duties. They also need to work out their relations with the spouses, as almost all PCs in Defiant are married – though with them being aristocrats, it is not necessarily out of love.

EGG: How does the system for this game work?
MARTIN: Usually, when someone asks me this question, they want to know about the dice used, character stats, etc. And sure, there's plenty to learn about that. We've got a video on our YouTube channel, explain the challenges – our dice mechanics. You can also download a free quickstart, Defiant Awakening, to learn all the basic rules needed to play. But for me, the "system" of a given game is more than the obvious set of rules. It's the whole structure of the game and the rulebook, the whole design philosophy behind it. So – to answer your question – the system in Defiant works by giving the GM all the tools they need to create the basic layout for every Defiant episode. And at the same time, it equips the players with the means by which they can influence the game for it to become more centered around their characters.

I'll give you an example. Every personal theme (you get three of those when creating your character), gives you a list of questions you can ask during the game. Say you wanted to play a fighter-kind of a character. Sure, politics is important and all, but you're here for the fights. You pick the warrior theme. And now you've got your own unique set of questions you can ask in literally any situation during the game (as long as you spend a point of game meta-currency, called the Shards). Since you picked the warrior theme, you've got questions like "What fight is about the break out here?" And suddenly, in a middle of a very refined evening cocktail, some form of a fight will break out. Perhaps the event will be attacked by a group of agents of Apocalypse, or maybe a rival of the host will come in guns blazing – that's up to the GM. But the character will get a piece of the action in line with what they wanted to play.

To sum it up. In Defiant, the system works by helping the GM to quickly create exciting episodes (game sessions) with interesting NPCs, etc. Then it allows the players to make every scene more about their characters. And finally, it helps the GM and the players better communicate their needs and work together to create something entertaining and satisfying for the whole group. On top of that, the game introduces a safety system so that everything remains within boundaries that all the players and the GM are comfortable with. 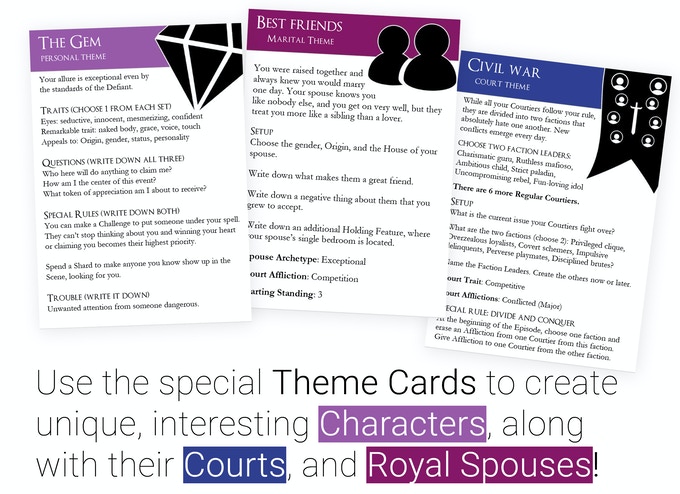 EGG: I appreciate you calling out the safety system. You did a version of this game in 2020 as a PDF-only product and the quickstart that you already mention, Defiant Awakening. What inspired you to launch as a digital product first instead of going straight to print?
MARTIN: To be honest, we weren't so much "inspired" as "forced" to go in the direction we initially went in. Kickstarter was not available for creators in Poland until very late 2020. We only learned about the plans to make it possible for us to start crowdfunding campaigns after we released Defiant in PDF. In the spring of 2020, with everything going on around the world at the time, we decided that it was time to show Defiant to the world. We've already been working on the game for almost three years at that point. Without global crowdfunding options available, opting for a digital release seemed like the only way to go. In early 2021, given that Kickstarter was now available for us and the game's warm reception, we decided we could now go for print. Fast forward a few months of talking with shipping companies, learning about crowdfunding, and designing the campaign – and here we are!

EGG: Compared to the original roll out, what's new in this version of the game?
MARTIN: Apart from minor changes and fixes, there will be a new chapter in the rulebook, introducing two new game mechanics – the Achievements and the Perks. This is something we originally intended for future Defiant supplements but eventually decided it needs to become a part of the main rulebook since a number of different Achievements and Perks will be introduced in future releases. We wanted the basic rules for those mechanics to be already present in the game so that we do not have to introduce and explain them in every supplement. We also revisited some of the illustrations we weren't happy with and are now creating their new versions.

EGG: Both of you, the creators behind Game Machinery, have extensive gaming resumes. Can you talk a little about your background and some of the highlights of what you've done and worked on?
MARTIN: We both became active members of the ttrpg fandom in the '90s. Back then, we wrote articles for the Polish roleplaying magazines. We also published two RPGs (both in Polish) – in 2004 and 2011. Additionally, I ran a Polish RPG Podcast, which I absolutely loved, but eventually gave up. I was way too obsessed with getting everything perfect, and creating a single episode took me weeks. Of course, of the two of us, Kate is the one with the more impressive resume. She worked with CD Projekt Red as a game designer on the Witcher and the Witcher II. She's also the one to already have published a roleplaying game in English. Kate's Reimagined became available on DriveThruRPG a year before Defiant and was just recently translated into French. 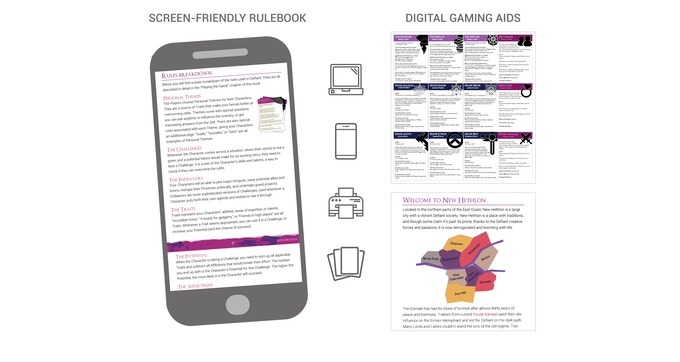 EGG: Beyond Defiant, what else are you working on?
MARTIN: The problem with creating a whole RPG project from top to bottom, with a team of only two people, is that you really have little time for anything else. Sure, we have a few games in the making, but they are all put on hold for now. With new material unlocked through the stretch goals on Kickstarter and additional work needed on the final version of the rulebook, we really need to put all of our energy into making Defiant the best game possible.

EGG: That’s fair. Again, thank you for talking with me about this project. Where can fans learn more about it online?
MARTIN: Thank you for your questions. The easiest way to learn about Defiant at the moment is to visit our Kickstarter campaign page. You will find links to our explanatory videos, the free quickstart, and other Defiant resources there. And of course, hopefully, you'll get interested enough to consider backing the project!

Defiant RPG from Game Machinery
Egg Embry participates in the OneBookShelf Affiliate Program and is an Amazon Associate. These programs provide advertising fees by linking to DriveThruRPG and Amazon.
Last edited: Jul 6, 2021
Click to expand...

The Personal Theme mechanic sounds interesting. I wonder how adaptable it would to other games. It would certainly need a GM good at improvisation for use in more traditional systems.

Besides WoD, Defiant also reminds me of NightLife, an early 90's game similar to WoD, but predates it by a year. NightLife included daemons as a playable race, and were often depicted socially as top-of-the-food-chain corporate raiders and such.

Thank you for sharing that, Sir Brennen. I missed NightLife completely. I'm reading about it now. This is an interesting RPG.

I have another interview with Marcin Kuczynski about the Defiant RPG and, more specifically, its artwork at d20 Radio.

Kate (Katarzyna Kuczyńska) and Martin (Marcin Kuczyński) of Game Machinery have a new project on Kickstarter, Defiant. This RPG, in Martin’s words, is “a tabletop [...]