Don't Use the Internet, It's Silly Season!

With April fool’s day upon us, it may be time to take a break from anything grim and perilous or gothically dark and try something a little sillier. There are a lot of comedy games out there, and while not all of them play well as a campaign they can offer memorable one off adventures. Playing something a little silly can also be a good way to clean the palate. They are usually very simple to dive into and offer the opportunity to go a little crazy. Nothing is off the table and the most stupid ideas are the most entertaining. Play the character that usually makes a mess of any party and have a blast. Get all the craziness out of your system in one glorious night of insanity and then you can return to some serious gaming refreshed and renewed.


View attachment 105568​
[h=3]Toon (Steve Jackson Games)[/h] Let’s start with the granddaddy of all comedy games, Toon – the cartoon role playing game. This allows you to play roadrunner and coyote, Tom and Jerry and all the insanity that implies. Order gadgets from ACME, paint tunnels on rock walls and do your best to ‘kill da wabbit’. No one ever dies in Toon, when you lose all your hit points you sit out of the game for three minutes and then come back fully healed. So you are encouraged to take all kind of crazy risks. There are plenty of adventures for this game but I never use them. Just find an excuse to pit the player characters against each other (such as a race) wind them up and then just adjudicate the insanity.
[h=3]Maid (Starline Publishing)[/h] The Japanese version of Toon in many respects. Your characters are all the maids in an old mansion run by a mad master. He’ll need you to perform all manner of strange tasks to keep the household working properly. Even getting him breakfast can be a crazed adventure, especially with all the maids jockeying for position to be the master’s favorite. Character creation is also a lot of fun and works ever better if you roll everything randomly and run with the odd combinations (like a vampire robot maid who is afraid of the dark and has a craving for peanuts).
[h=3]Paranoia (Mongoose Publishing)[/h] In Paranoia you are all citizens of ‘Alpha Complex’ a huge bunker containing all of humanity. Unfortunately, the computer running it has gone a little crazy (to say the least) and sees conspiracy everywhere. As your character attempt to complete its confusing orders, you need to avoid appearing to be any form of traitor or face instant execution (luckily you get 9 clones as replacements – but you’ll need them). The problem is that all of you are actually traitors of some form working for a secret society. Good luck.
The best way to illustrate Paranoia is to share the greatest player handout ever used in the history of gaming. A friend of mine was running the game at a con and also had a 6 month old daughter to look after. So he placed her gently on the table and told the players that part of their mission was to keep the baby quiet and happy or face execution. Babysitting and gaming sorted. Plus, I think this also means Freya had the earliest start in gaming of anyone I know.
[h=3]Low Life (Mutha Oith Creations)[/h] If you are a fan of Savage Worlds, this insane game actually suits long term play. It is set in the distant future where humanity is a long forgotten piece of history. The world is now dominated with the evolved descendants of the sort of things that tend to survive apocalypses: moulds, fungi, cockroaches etc. This game is both alien and strange and offers a great way to play the usual sort of adventures with some very strange adventurers.


View attachment 105569​
[h=3]HOL (Dirt Merchant Games/White Wolf)[/h] While this game comes into the ‘funnier to read than play’ it is a really funny read. It stands for ‘Human Occupied Landfill’ and takes place on a vast planet that is used as a galactic rubbish tip. The book is ‘handwritten’ and began as an indie game that White Wolf liked so much they reprinted it so it could reach a wider audience. The example of combat devolves into a fight between the player and the Gamemaster and modifiers for most things are defined by how many times to say ‘really’ when describing something really far away. Even if you never actually play it, find a copy and read it, Elvis would want you to.
[h=3]Red Dwarf (Deep 7)[/h]
Based on the TV show, this RPG isn’t as entertainingly written as it might be but does have all the right elements. It offers full detail on playing dogs, cats, humans, holograms and killer robots among a host of others. If as a Gamemaster you despair that your group tends to be more like Red Dwarf than Farscape, put it to the test and indulge them. Best served with a nice curry.
[h=3]Pasión de las Pasiones (Magpie Games)[/h] This game using the Apocalypse Engine is a gloriously entertaining dive into the world of Latino telenovellas. Characters range from the gangster boss, the matriarch, the innocent, the manipulative seductress to the twins and heroic lover. Everyone is wealthy, attractive and smolders with unbridled passion in every form. Over play everything, make convoluted plans to secure the one you love or destroy a hated enemy, and tell any lie to secure whatever you’ve set your heart on. Just try and do it with a straight face, because taking it too seriously is also part of the fun.
[h=3]Fiasco (Bully Pulpit Games)[/h] Fiasco is a great game for any time of the year, and need not always be a silly game. It’s a storytelling game designed for a single session of play, so makes a great ‘between game’. While you can play a deep and serious game, it often devolves into insanity pretty quickly. Based on films like Fargo and Shallow Grave, your characters generally find themselves in a situation where they can either be sensible and make a small profit, or get greedy. Guess which they usually pick.

What makes this game interesting is that characters are created by the connections they have to the other characters. This makes Fiasco a very useful gaming tool in its own right. Once you figure out what you all have in common, which includes a few shared needs and desires, you set the scene and get going. The only problem here is that you get little help to initially jump start the story, but there is usually enough inspiration in the characters, and once you get started it quickly becomes a runaway train.
[h=3]…and Finally[/h] There are plenty more games for a silly session, too many to list, but I couldn’t resist listing just one or two more. My own ‘Hellcats and Hockeysticks’ is an anarchic look at school adventures. Leverage (Margaret Weis Production) is a heist game that is designed to be serious but would be hysterical with amateurs. Spirit of ’77 (Monkey Fun Studios) is a glorious take on the ‘blacksploitation’ films of the 1970s and easily the game Quentin Tarentino would run today. Finally, ‘All Flesh Must Be Eaten (Eden Studios) offers you every zombie movie made, so if you fancy going all ‘Evil Dead’ this is the one for you.

This article was contributed by Andrew Peregrine (Corone) as part of EN World's Columnist (ENWC) program. We are always on the lookout for freelance columnists! If you have a pitch, please contact us! 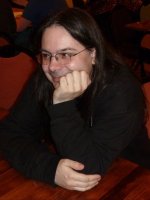 Andrew Peregrine
Andrew Peregrine has been a freelance writer for RPGs for over 10 years. He has worked on Victoriana, Doctor Who (Cubicle 7), Firefly, Leverage (Margaret Weis), Judge Dredd (EN Publishing), Vampire the Masquerade (White Wolf/Onyx Path/Modiphius) and Star Trek (Modiphius) among many others. He also produces his own games as 'Corone Design'. However, for a real job he works as a lighting technician at the Theatre Royal Haymarket in London's West End.

I still have my original (WW) printing of HōL (as well as its lone supplement, Buttery Wholesomeness) and I can't recommend it enough. They are full of humor and satire and it's hard to keep track of just how many classic games and tropes they're skewering.

Be aware though: the book is full of pretty intense language and copious profanity. If that's something you're not into, you might not dig it.

Hol is funny, but it is surely hard on my eyes. Low Life is a hoot, and truly imaginative.

* palate - the roof of your mouth

There is only one game to play on this day. I really wish I could still get The Ghostbusters RPG and Tales From the Floating Vagabond. Now THOSE were a couple of funny, simple RPGs to sink one's fangs into! Love TOON though

murquhart72 said:
I really wish I could still get The Ghostbusters RPG and Tales From the Floating Vagabond. Now THOSE were a couple of funny, simple RPGs to sink one's fangs into! Love TOON though
Click to expand...

This exists, and it's pretty cool!

Fiasco is a riot. After our last game, I'll never be able to look at penguins the same again.

I know this is April Fool’s fun, but as I recall you only start with a six pack of clones in Paranoia, though you can buy more.