Dragon Publishing released Dragon issue 48 in April 1981. It is 96 pages long and has a cover price of $3.00. In this issue, we have a new Top Secret mission, underwater campaigns, and an instant adventure table! 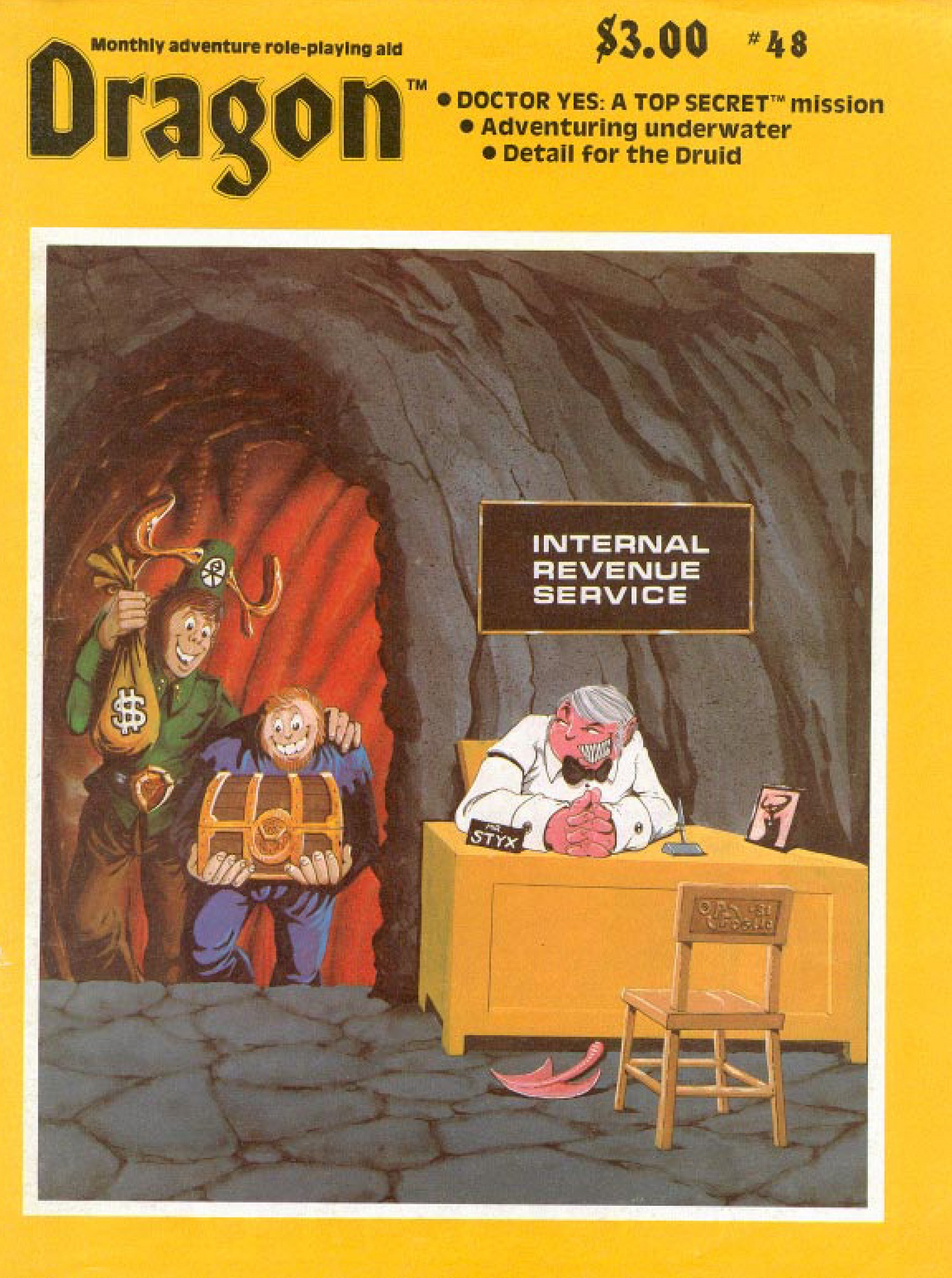 Editor Jake Jacquet is excited to share that Dragon recently commissioned covers from some top-shelf fantasy artists, namely Tim Hildebrandt, Carl Lundgren, and Boris Vallejo. It's another sign of the magazine's growth and success. He also notes the upcoming release of The Best of Dragon Vol. II and the Days of Dragon fantasy art calendar.

This months' special feature is "Doctor Yes," a 16-page Top Secret adventure designed by Merle Rasmussen, the author of the original game, and James Thompson. Rasmussen wrote many more articles supporting Top Secret over the coming years and also worked on several D&D supplements. Thompson has only two more article credits to his name and appears to have done nothing else professionally in the field. The adventure itself uses the map of a secret base from the original rulebook, and it seems fondly remembered by fans of the game.

There's a small collection of articles related to underwater D&D adventuring. In "Watery words to the wise," Jeff Swycaffer addresses some "overlooked aspects of an undersea fantasy sub-campaign," including things like the relationship between mermen and coastal villages and simulating 3-dimensional battles underwater. Swycaffer was a regular contributor to Dragon magazine but is best known as the author of the Concordat novels.

"Dragon's Bestiary" has three new underwater monsters: the Sea Demon by Ernest N. Rowland, Jr., and the Water-Horse and Golden Ammonite by Roger E. Moore. Meanwhile, "Bazaar of the Bizarre" presents us with eight new water-themed magic items, seven of them by Moore and one by Bruce Humphrey. They are mostly pretty obvious (e.g., Spear +2/+4 vs. Sharks), but a few of them include some nice details.

Tim Lasko gives us two overlapping articles, "The Druid and the DM," and "Druid in a dungeon? Why not?" The first aims to dispel several common "myths" about druids, most notably that they are misanthropic. The second discusses how the wilderness-focused druid can be helpful in a D&D dungeon.

In "Let a mule do it for you!" regular contributor Robert Plamondon (the same fellow who was feuding with assistant editor Kim Mohan last issue) discusses the utility of mules in a D&D game and gives a sample equipment pack manifest. "Instant Adventures" by Michael Kelly is the sort of article I love, with a table of D&D adventure ideas (e.g., "parcel delivery," "rescue from natural forces," "big-game hunt) and implementation suggestions. This article appears to be Kelly's only RPG-related publication, but it was reprinted in the Best of Dragon Vol. V.

"New orders for Russian Campaign" by Robert A. Barrow and "Adding airpower options" by Bryan Beecher are variant rules for the Russian Campaign game by Avalon Hill. Together, these articles consume just a single page, and it demonstrates how little support Dragon was now giving to wargaming.

Continuing an April tradition, there is an 8-page mini-feature called "Dragon #48½," which parodies the magazine. These seem to miss more often than they hit for me. Lowlights include a 2-page RPG called "REAL LIFE," which simulates everyday human existence in the twentieth century. But I rather enjoyed "Saturday morning monsters," which gave D&D statistics for Bugs Bunny, Popeye, etc.

On to the regular features! "Up on a Soapbox" has two articles this month. In "When choosing a DM, be choosy!" Fred Zimmerman relates some criteria for identifying "superior" DMs, such as being open to improvisation. In "What is gaming's role in life?" Karl Horak gives some zen-inspired musings on the relationship between gaming and morality.

Glen Rahman brings us another edition of "Minarian Legends," this time describing the mercenary fleets of Minaria. Next, in "Giants in the Earth," Tom Moldvay presents D&D stats for two more characters from literature, Sparrowhawk and Tiana Highrider. And in "Leoumnd's Tiny Hut," Len Lakofka gives some advice about creating a sample D&D adventuring party.

"Sage advice" returns, though they are no longer crediting the sages. There is just a single page of questions in this issue, and none of them caught my eye.

And that's a wrap! The highlight for me was "Instant Adventures." Next month, we have an extended feature on artist Tim Hildebrandt, Ed Greenwood up on a soapbox, and the Samurai class!
Click to expand...

I'd put this in the ok category....not bad, not great. But we are getting very close to some great issues.

And yes, the "funny" stuff nearly always missed for me then, and now.

I find it fascinating that someone would talk of being choosy about picking a DM back then. I know my experience for a long time was that there really wasn't much of a choice. You were pretty much stuck with either DMing yourself or being stuck with whoever in your social circle was willing to do so. Maybe it was different in different areas. Of course now, a person absolutely can and should be choosy. But back then I remember being stuck with who you had for the most part, for players and DMs (of course, sometimes a person would still manage to get themselves booted or told "okay, you don't get to DM for us anymore").


M.T. Black said:
On to the regular features! "Up on a Soapbox" has two articles this month. In "When choosing a DM, be choosy!" Fred Zimmerman relates some criteria for identifying "superior" DMs, such as being open to improvisation.
Click to expand...


I wouldn't say this is Foglio's best cover, but it has such a lovely sense of humor.

A decent issue, but yes, the April Fools material almost always felt like wastes of space to me.

It's funny, (sorry) I always liked the April Fools stuff. Not terribly usable, but, always worth the read I found. I get why so many folks didn't care for it though.

I'd love to see the write-up for Sparrowhawk. Not sure you can really do it properly with older editions of D&D.

I think the issue was a good one. I almost always found articles and ideas that were interesting in Dragon in this era. That wasn't always true. It's just... "mediocre" but in a good way It just doesn't stand out as some issues do. And yes, the humor was... not the best part of the magazine.

Titan is one of my favourite board games of all time; I still have a copy on my shelf. The way it incorporated both strategic and tactical play was pretty stand-out back in the day when most Fantasy board games were still fairly rudimentary in their mechanics and scope.

It has some challenges by comparison to more modern games, primarily a long play-time combined with the possibility of player elimination. You could quite conceivably be eliminated half an hour into a six hour game…

But I would play it again for sure.

Dioltach said:
I'd love to see the write-up for Sparrowhawk. Not sure you can really do it properly with older editions of D&D.
Click to expand...

Well, he starts out as a 21st-level Illusionist and a 20th-level Magic-User, then there are lots of notes about Druid spells he has available, new spells, and changes to magic on Earthsea. This one might be the only GITE that got me to read the book it came from.


dbm said:
Titan is one of my favourite board games of all time; I still have a copy on my shelf.
Click to expand...

The only thing I really knew about Titan was that, according to Space Gamer's Murphy's Rules (#46, December 1981), the counters were printed with water-soluble ink. "A spilled Coke can wipe out an army."