When I spoke to Steffie De Vaan about Masks of Theros, she mentioned working with Cat Evans and Liz Gist on the project (among others). On the strength of Masks of Theros, I was excited to hear about Liz and Cat producing a new 5e project on Kickstarter, Dreadful Realms: Caverns of the Wise Minister from Ex Stasis Games. They agreed to talk about their dark fantasy setting, the extras they’re developing for this campaign, and their resumes including freelancing for EN5ider. 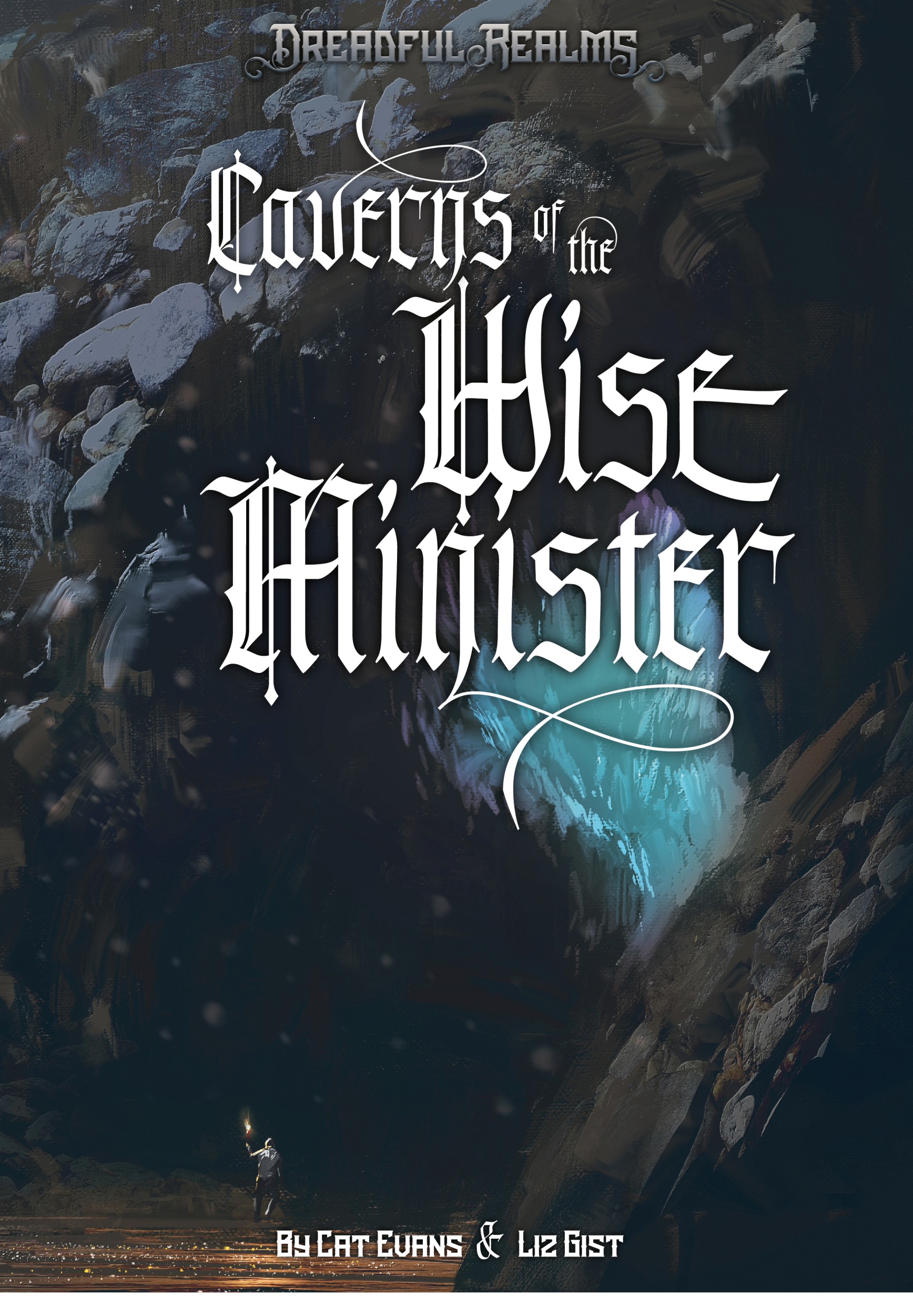 EGG EMBRY (EGG): Thanks for speaking with me about your RPG Kickstarter. What is Dreadful Realms: Caverns of the Wise Minister?
LIZ GIST (LIZ): Dreadful Realms started as an indulgent little project over my birthday weekend because it had been months since we’d written anything together, and quickly took on a life of its own, as these things are so wont to do. It’s the combination of everything we both love - gothic horror, elves, terrifying creatures, and strange magicks. What it actually is, though, is a brand new dark fantasy setting for 5e, set deep in the Underworld. The centre of the setting is the piecemeal city of Sepulchre, where the cave elves and others live, but there’s also a vast, glowing lake full of mysteries, a subterranean forest with bleached-white trees, and the rising threat of temporal rifts.
CAT EVANS (CAT): Dreadful Realms offers players the chance to uncover secrets as old as history, explore the dark caverns of a realm trapped between life and death, and end the machinations of a monstrous being with a grudge against a god. As well as an in-depth, illustrated setting guide the book includes character options from races and subclasses to backgrounds, as well as new spells, magic items, and creature statistics.

EGG: With mentions like "elves" and "Underworld", does that mean that Dreadful Realms: Caverns of the Wise Minister deals with Drow?
LIZ: No. Absolutely not. Actually, the cave elves were one of the first things we came up with, and it was as an alternative to drow. We’re not big fans of the way the drow have been developed, or of making every member of a race or culture evil, so we wanted to explore an elven society that isn’t cartoon evil but does have some serious flaws. There are plenty of cave elves just living their lives day-to-day, but one of the themes of the setting is that power corrupts and that’s definitely true for the elves.

EGG: I appreciate that you’re creating distinction between your work and past options while, at the same time, adding dimension to your setting. Within dark fantasy settings there’s a range of darkness. In terms of levels, how dark do you feel this is? How does it compare to other dark fantasy?
CAT: That’s a great question, because there are definitely variations. Dreadful Realms is dark in the sense that people are terrible, history is a lie, and the kind of people who most want power definitely should not hold it. The setting is a physically, societally, and spiritually gloomy place to be. It’s not, say, MÖRK BORG dark in that the whole world is doomed, but it’s definitely somewhere you can’t solve major structural problems by killing the right monster.
LIZ: The way I describe it is “moody” dark rather than “gritty” dark. We explore themes such as manipulation and what being alive or dead really mean, but this isn’t a world where slavery, assault, or racism are featured. Similarly, you’re unlikely to get murdered on the street here. It’s a dangerous setting, but not unnecessarily so.

EGG: Generally, 5e is a player-winning-system, which, to some, means it’s mechanically at odds with dark fantasy. That said, what made 5e the right system for your setting?
CAT: People have said that, but D&D has always had the ability to delve into dark fantasy — look at Dark Sun, or more recently Curse of Strahd or even Rime of the Frostmaiden. 5e definitely isn’t tailored to dark fantasy but you can do it (especially with a couple of small mechanical hacks). Darkness is in the stories you choose to tell, not necessarily the mechanics. Our dark fantasy is about making choices as to what you save and protect, what you let slide, and what price you’re willing to pay for victory. You can model that very well in 5e because players are still invited, even trained, to behave like heroes even when they’re up against problems they can’t fully resolve with a divine smite.
LIZ: The majority of campaigns I’ve run in 5e have actually been dark fantasy! D&D is such a flexible game to start with, and one that we’re both very experienced writing for, so it felt like a natural choice. One thing I’m really excited for about Dreadful Realms is some of the mechanics we’re pulling forward or adapting, such as the the light and darkness rules, and exploring what combat looks like when you’re in a cramped, winding tunnel, or scaling up the side of a giant stalagmite. 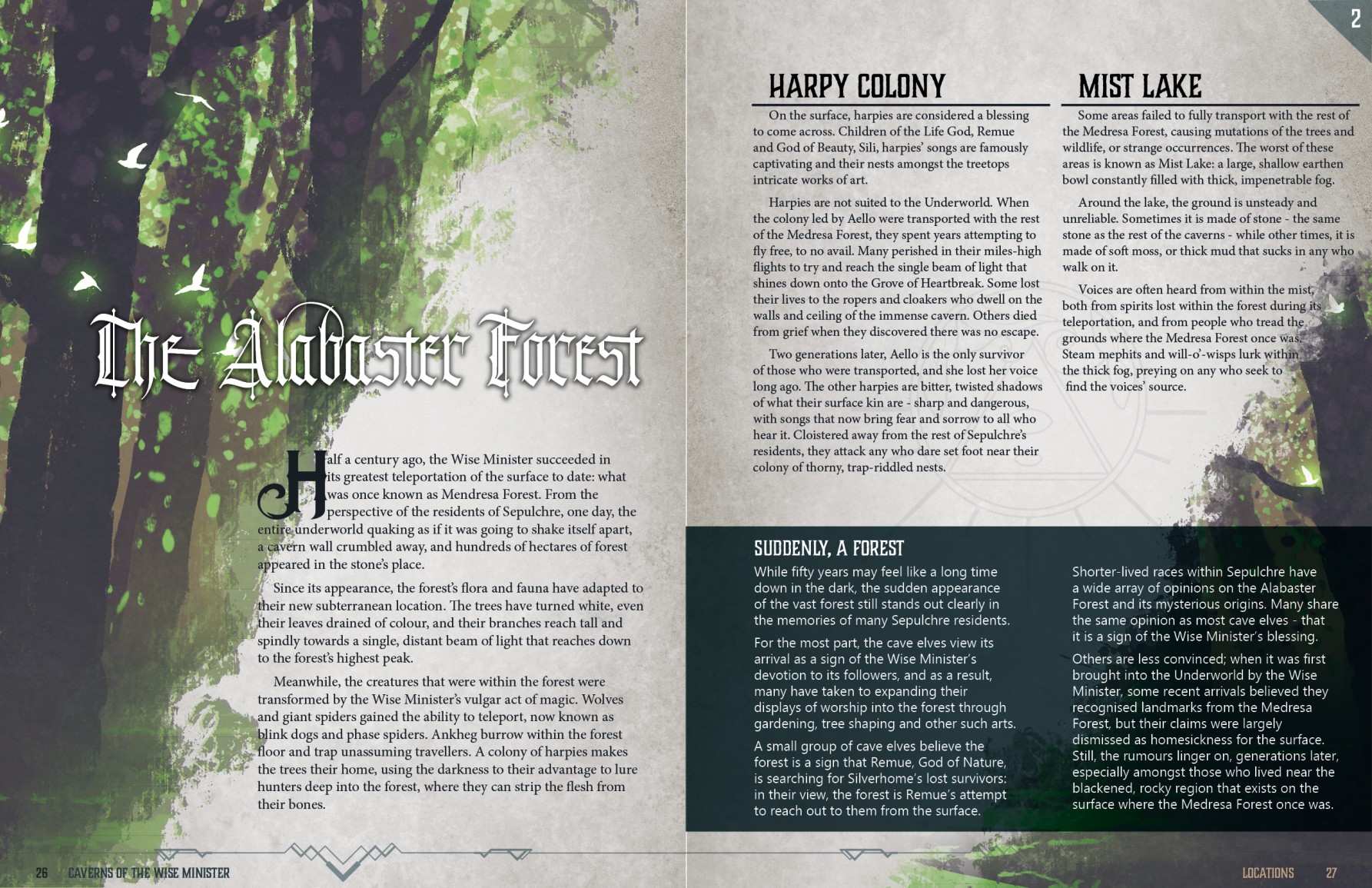 EGG: Beyond setting material, what gaming material can fans expect?
CAT: Lots. LOTS. The core book includes a lot of new player material, involving new races, new subclasses, and new backgrounds, as well as new spells, magic items and creature statistics.
LIZ: Like I mentioned, alongside player options, we’re also expanding on some gameplay mechanics. Environmental factors in combat are a huge amount of fun, and we’re exploring ways to build up social mechanics, especially since this is a largely urban setting. It’s an urban setting in the Underworld, but still! By launch day, or close to it, we’ll also have a free level zero adventure by Jessica Marcrum, so people can get a taste of the setting and some of the player options.

EGG: How many pages will this project be?
CAT: The setting book comes in at 40,000 words. It’s hard to estimate pages, mostly because we like to design for easy readability which means bigger fonts and good spacing. The better our Kickstarter funding, the more art we can add, so the bigger the book gets.
LIZ: I have so many art ideas for this book. I want to cram it full of art and maps and gorgeous visuals that paint a picture for anyone who decides to journey down into Sepulchre.

EGG: Will the campaign offer any additional books or other gaming materials?
CAT: Our major stretch goal is a level 1-11 adventure path to go along with the setting, so that’s an entire additional hardback which will probably be even bigger than the core book.
LIZ: I’ve been taking the lead on add-ons for the Kickstarter campaign and I’m so excited about all of them. We have gorgeous sharp-edged dice, a dice bag made by Frankie Ray with this really cool gothic fabric. I’ve had the mind-blowing experience of designing multiple minis for printable STL files, the first of which will be available at launch, with two more set as stretch goals. We’re also planning an absolutely beautiful limited edition version that will contain both the setting book and the adventure path. And we have a couple of early treats - if we break 200 followers ahead of launch, we’ll be giving every backer an art print, and the first day print backers will also receive an enamel pin of the Wise Minister’s seal. 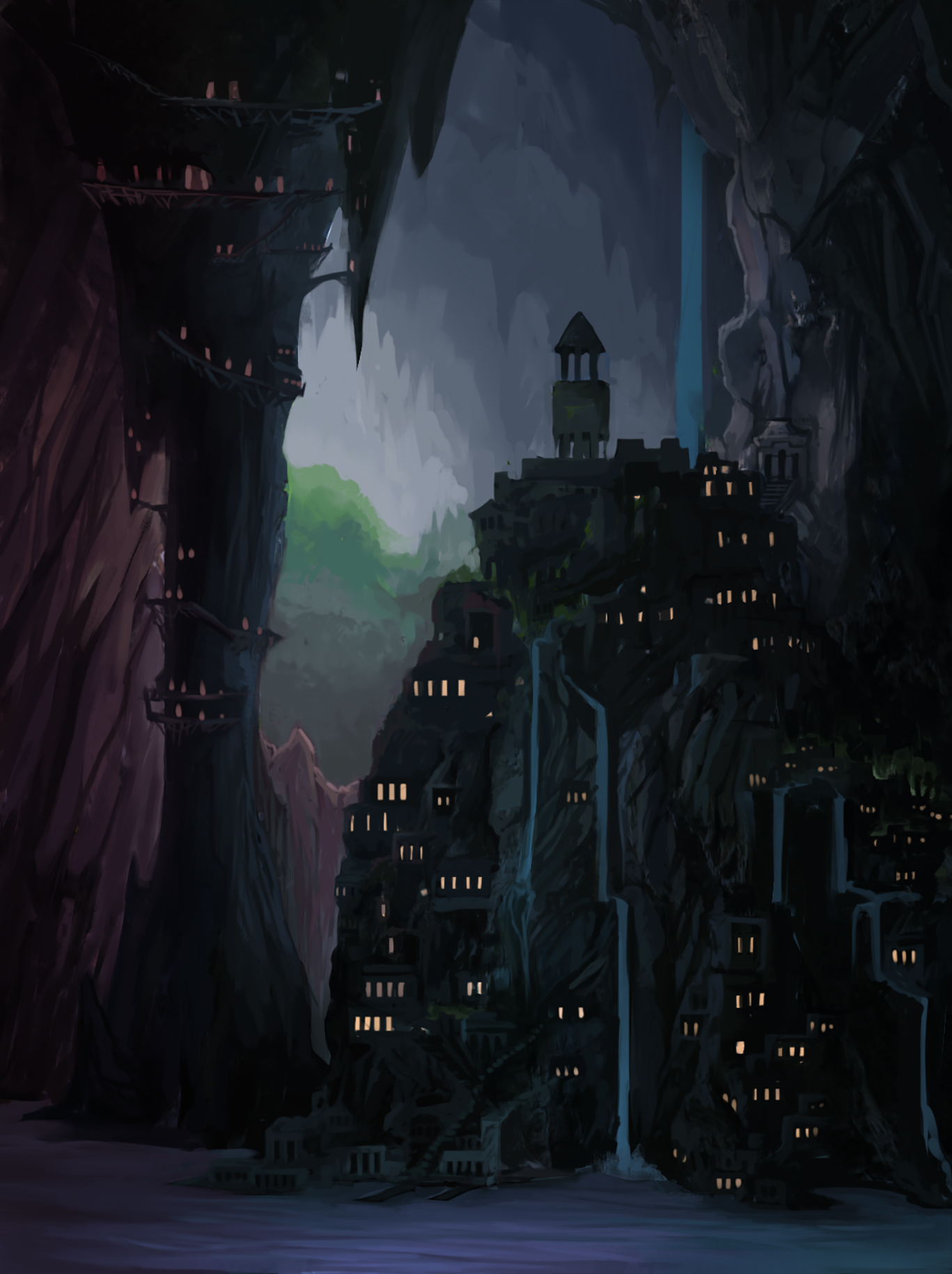 EGG: That’s a nice collection of extras! Who is working on this project?
CAT: Well, there’s us. We’re the writers and designers for the setting book, and Jessica Marcrum is writing the level 0 adventure. For the adventure path (if we get that far), we’ve got a team of other awesome writers bringing other ideas and perspectives to the project. We’ve got Alex Clippinger, Alison Huang, KC Shi, James Sambrano, and Steffie de Vaan. Between them they’ve worked on a startling number of game lines. We’ve got some great horror and dark fantasy credentials in there, but we also put a lot of thought into people who would handle that subject matter with maturity and sensitivity.

EGG: This is not your first project. Where else have fans seen your work?
LIZ: My list of credentials isn’t nearly as impressive as Cat’s. My work has mainly been on the DMs Guild, where I’ve co-written several books with Cat. I’ve also been an artist in projects such as Uncaged and Book of Seasons. I’m the art director for Eat the Rich! and I was the lead artist for Masks of Theros.
CAT: Between work that’s already out and work that’s on the way, I’ve written for Vampire: the Masquerade, Mage: the Ascension, Age of Sigmar: Soulbound, the Altered Carbon RPG, and Trophy Gold. I’m probably best known for DMs Guild work like Eat the Rich!, Masks of Theros, and the assortment of horror and dark fantasy creations I have on the Guild and itch.io.

EGG: Other than this project, what else are you working on?
LIZ: I’ve been spread across all sorts of different projects lately. I think a few new people are horrified every day by the goo dog I drew for Alex Clippinger’s They Want to Be Us, and I designed several iconic characters for David MarKiwsky’s cyberpunk TTRPG, Utopia.
CAT: screams in NDA [Non-Disclosure Agreement] If this Kickstarter goes well, we have ideas for more Dreadful Realms, exploring other parts of the same fantasy world. Think poison gardens and really horrible fey creatures.

EGG: Cat, among your writing credits that aren’t NDA’ed, you wrote for EN Publishing with Intriguing Organizations: House of the Reclaimed Soul. What can you share about that project? What was it like working for EN5ider?
CAT: I did! I think that’s my first published setting, as opposed to adventure or player option. I had a lot of fun making the House of the Reclaimed Soul, a monastic order trapped in Avernus and slowly giving in to corruption while telling themselves they’re pure and good. It has some themes in common with Sepulchre, actually. Specifically, people believing, misguidedly, that they’re the good guys is one of my favourite things to play with. A lot of problems in my writing would be solved if people took a good hard look at themselves.

EGG: Thanks for talking with me. Where can fans follow your work?
LIZ: First off, the Kickstarter link is here! For my work, people can find my portfolio at [Artstation] and follow me on Twitter @crit_liz.
CAT: You can get a taste for the kind of stuff I write when left to my own devices on [Itch], and if you can tolerate the stream-of-consciousness nonsense, I also talk about my work a lot on Twitter @perpetualgloom.

AUTHOR’S NOTE: For more on this project, check out Andrew Girdwood’s interview/article at Geek Native.
Egg Embry participates in the OneBookShelf Affiliate Program and is an Amazon Associate. These programs provide advertising fees by linking to DriveThruRPG and Amazon.

Egg Embry is part of EN World's Columnist (ENWC) program as well as a columnist for Knights of the Dinner Table, d20 Radio, High Level Games, the Open Gaming Network, the Tessera Guild, and GAMA's magazine, Around the Table. His area of focus is tabletop RPG crowdfunding campaigns. His RPGs can be found through Egg Embry Publishing at DriveThruRPG (PDF) and Itch (PDF/Print).
If you enjoy the articles on EN World, please consider backing the EN World Patreon. Every dollar helps to make these articles possible.
Share:
Facebook Twitter Reddit Pinterest Tumblr WhatsApp Email Share Link
Forum list Post thread…