In 2e Planescape there was A Guide to the Ethereal Plane enough material to fill a 96 page book on the subject of the Ethereal Plane, it had Demiplanes, Dreamscapes, Protomatter, anything incorporeal and a bunch of mysterious locations. But in 3e demiplanes where made to be connected to any plane but mostly the Astral Plane, the demiplane of Shadow became a full-fledged plane, Astral Plane got the Protomatter in the form of the controversial Psionic Ectoplasm, and Dreamscapes became part of the optional Region of Dreams (though established in the Eberron cosmology as Dal Quor). Overall in 3e, the Ethereal Plane didn't have too much going for it beyond a few monsters like Ethergaunts, or the planetouched variety Shyfts which were as boring as the Ethereal Plane became in 3e. 4e didn't even have an Ethereal Plane as more of it's aspects got pulled into Feywild which was the optional Plane of Faerie or the Plane of Shadow which became Shadowfell.

In 5e the Ethereal Plane is back, but after everything it lost in 3e and the established niches of Shadowfell and Feywild, there isn't much left of interest for the Ethereal Plane beyond you go from the Shore (Border Ethereal) to the Ocean (Deep Ethereal) and to another Shore (Border Ethereal) of another plane. With Demiplanes once the Ethereal's biggest feature scattered to different planes, mostly what's left is Dreamscapes if one ignores having the optional Region of Dreams (which hasn't been brought up in 5e yet).

Dreamscapes
I think the Ethereal Plane should take back dreams, Dreamscapes should be emphasized to give the (Deep) Ethereal something of a distinctive niche now that Shadowfell and Feywild have theirs. It's sort of there already as Night Hags still need to be in the Ethereal Plane to use their Nightmare ability.

There's the small temporary dreamscapes that are created when most creatures dream, dreamscapes that only last for the few hours that such a creature dreams. And then there would be the permanent Dreamscapes made from rare dreams that rupture into the Ethereal Plane, like Anavaree a little girl's storybook like realm created by an adult space colonist named Ana who's actually still in a stasis pod of a crashed colony ship (yes this particular example first appeared in 2e).

Some of the sources on Planar Dreamscapes are 3e's Manual of Planes where it's an optional plane, and Dragon 287 where it could be a transitive plane, an inner plane with a tempest dream energy or an outer plane where there's Gods which rule over dreams (taking a bunch of inspiration from The Dreaming in Sandman). My idea is to take elements from all of them.

Dreamscapes had this mechanic where you use mental ability scores to replace a bunch of physical ones. I think that design choice goes against some of the philosophy of 5e design in trying to keep it simple. So none of that should happen, but allow some characters to use something like Intelligence or Charisma for attack rolls and damage if they want to. Dying in a dream usually means one is ejected from a dream, but in permanent ruptured dreamscapes, death is more permanent. Let's just say that somethings that were really powerful in temporary dreamscapes, become diluted and weakened in permanent ones.

Dreamscapes could be regions one wants to go to if they need to do influence someone like in the movie Inception, or uncover a secret from the subconscious.

The Dreamheart and Kingdoms of Dreams
At the heart of the Deep Ethereal is the Dreamheart (or Dreamhearts if one wants multiples), and around the Dreamheart there will be Dreaming kingdoms much like the ones mentioned in Dragon 287. The Dreaming Monarchs would be planar powers akin to the Dark Powers of Shadowfell or the Archfey of Feywild, in that they are God-like but not necessary Divine Entities themselves. Each Dreaming Monarch claims dominion over a certain type of dream, like nightmares born of doubts, dreams of alternate possibilities or revelatory dreams. Some of the Dreaming Kingdoms might have links to other planes, usually Feywild or Shadowfell or one of the Outer Planes, in the form of influences.

Raw protomatter exists throughout the Deep Ethereal Plane, but it is formless and mostly inert unless shaped. Dreams are the most common method of shaping protomatter, think of it where protomatter becomes refined, and the Dreaming Monarchs have servants who shift through and monitor dreams of interest to scavenge. Occasionally something of interest is taken from a dream, and the Dreaming Kingdoms are built with dream forged materials.

The Dreamheart is a maelstrom of protomatter and dream material, it may in fact be the source of Ether Cyclones and other such phenomena. It's dangerous for most beings, but it's where protomatter becomes dream material forming a small bubble in the reality of elsewhere inthe Ethereal Plane. Beings of dream energy come and go from the Dreamheart, and it's thought that what was in the Dreamheart was something the ancient Khen-Zai (now known as Ethergaunts) sought.

So beings that could be found in the Ethereal are Incorporeal Undead like Ghosts and Spectres, Night Hags who have hidden demesnes, the annoying Ethereal Filcher, the Khen-Zai/Ethergaunts, Phase Spiders (there was that neat Phase Spider domain in A Guide to the Ethereal Plane), and other things in addition to Travellers, Dreamers and Dreaming Kingdom residents.

Dreaming Kingdom residents can be beings of energy with some kind of template applied, they could be Quori from Eberron, or other things.

I like the idea of the Ethereal being a place of Dreams.

Don't forget illusions (made permanent and sentient by the magical potential of the Ethereal) who've taken on "lives" and personalities of their own.

For me. Dreamscapes should be in the astral.

In my current campaign, I'm using the Dreamscape as a separate plane, as per the 3.0 Manual of the Planes. It's ruled by the Queen of Dreams and the PCs are currently being trained as dreamwalkers, capable of entering a person's dreams - a very useful skill, considering there's a dream plague spreading across the continent, where people are being trapped inside their dreams while their bodies enter a sort of magic stasis. They're presently going from victim to victim, freeing them from their dreams while they'll slowly be learning what's causing the plague.

I admit I feel a great influence of the cosmology from White Wolf's World of Darkness and Changeling: the Dreaming. Then I imagine the dreamscape as demiplanes linked to the Feywild.

Other idea I would like to add is the "akasha realms", demiplanes created by the collective memories. There are like "theme parks" imitating the past (how they are remembered, not how really happened). Do you know the Dragonlance novel "Tanis, the shadow years"? This idea allow PCs to travel the past but without worrying about time paradoxes because here the past can't be altered. The Hollow World from Mystara could be an "akasha realm".

Sithlord said:
For me. Dreamscapes should be in the astral.
Click to expand...

In some cases it might make sense, but as I've pointed out the Ethereal Plane has lost a lot of it's niches over the various editions since 2e which is why I feel it needs to strongly take something to make it distinct (like Dreams), with the Astral, Feywild and Shadowfell being around.

I guess it could cannibalize the optional Plane of Mirrors, but I feel that fits less with the Ethereal, and might be better suited as some "hidden layer" to the Outlands instead.

And on the subject of another optional plane from the 3e Manual of Planes, I wouldn't bother with the Spirit World at all in the 5e cosmology since it basically became Feywild and Shadowfell.

Kobold Avenger said:
In some cases it might make sense, but as I've pointed out the Ethereal Plane has lost a lot of it's niches over the various editions since 2e which is why I feel it needs to strongly take something to make it distinct (like Dreams), with the Astral, Feywild and Shadowfell being around.

I guess it could cannibalize the optional Plane of Mirrors, but I feel that fits less with the Ethereal, and might be better suited as some "hidden layer" to the Outlands instead.

I also like having dreams exist in the Ethereal rather than the Astral . . . dreams to me always seemed somewhat elemental, while the Astral represented more higher-order conscious thinking. Doesn't perfectly work out, but nothing really does in D&D cosmology!

Eminence is not a scalar value, but a vector; but near any Border Ethereal, the absolute value is what matters.

The washed-out nature of what you see in the attached plane in the Border Ethereal is because of the Eminence distance between you and the plane.

Moving in the Eminence direction(s) is non-trivial for most creatures, especially those not native to the Ethereal plane. When someone dreams, they push their mind into the Ethereal plane, which causes Eminence-direction waves to shake the local Border Ethereal; this is experienced as color appearing and washing out.

In order to push off in the Eminence direction, you need something to push off of. Ways deeper into the Eminence of the Ethereal exist, they are like ramps on a floor, allowing ants to crawl up the z axis. You can also seek to hitch hike on a dreamer, slowing their rise in the Eminence but also giving you a way out of the Border. You'll often get caught up in their dream-bubble, and have to work out a way to escape.

These dreamscapes form a frothy layer between the Border Ethereal and the Deep Ethereal. Getting into the Deep Ethereal may require hopping from dream to dream, aiming to move further away from the Border (one way to figure out if you are going in the right "direction" when dream-hopping is to look into how much things correspond to reality; things closer to the Border of a reality correspond more).

The Kingdom of Dreams would be an area built in that froth. Dreams where the dreamer died while dreaming, dreams that outlived the dreamer, dream smiths that manipulate mortal dreams to ensure a constant living supply of a specific kind of dream.

The Dreamheart and the Tower of Nightmares are two relatively permanent structures in the Kingdom of Dreams whose foundations are in the Dreamscapes of the middle kingdom, and whose heights border the Feywilde.

I like the idea of the Dream Realm being in the Ethereal; in would work in the Astral as well, but considering how most stuff is in the Astral, it seems indeed better to give the Ethereal this thing instead.

This is by the way the best write-up on the Ethereal Plane I've ever read, that makes it way more interesting;


One section I like; describing the Omniad, matriarch of phase spiders.

One of the creatures that have used the Ethereal Plane for their own end are the phase spiders, here they have produced massive colonies and massive webs that slowly float through the Deep Ethereal. If a traveler is suddenly swept up by a massive web, dozens of phase spiders can envelop them as the sticky web restricts the traveler’s movement. The greatest of these webs is controlled by the phase spider matriarch, Ommiad. This massive web slowly spins through the Deep Ethereal and has hundreds of phase spiders that live on it, always searching for food. Ommiad is said to be massive in size and wears many powerful magic items, and recently many have claimed that Ommiad has put in a policy that merchants are to be traded with, not eaten. 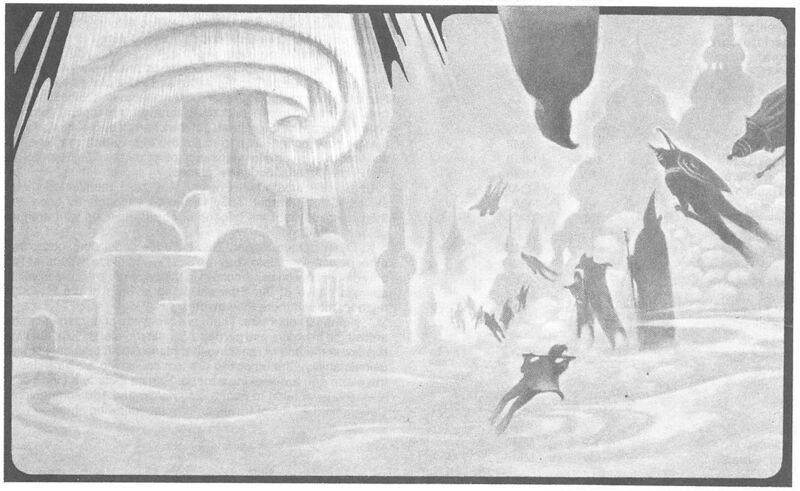 D&D 5E Border Ethereal - What am I missing?