Emerge From a Web of Blood and Pain!
Shrouded in mystery, the drider has long been an enigma, with descriptions of the creatures varying between gorgeous and grotesque. Now, for the first time, the secrets of the goddess-cursed drider are revealed from their very own lips (and mandibles)!

In this book, you will learn about the secrets and horrible truths of Aventyr's drider species as well as all the tools you need to incorporate them as playable characters... or adversaries.

This book includes:
*Rules to play a drider, including two distinct drider subraces
*Six new drider Feats
*The devious and beautiful blood web weavers and their bardic college
*New blood web spells
*The mutated and grotesque foot soldiers
*of the Failed
*Drow wranglers of the Failed, and their magic whips
*Mrokatar, the Dweorg-Breaker, and his legendary artifact 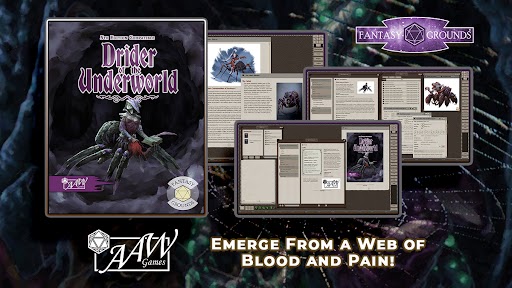 A
(KS) Underworld Races & Classes for 5th Edition and Pathfinder