Today we've got EN5ider's 350th article! We are incredibly grateful to have so many Patrons and thank everyone who has been, is, or might become one. We figured that an awesome planar-hopping fiendish dungeon labyrinth was in order to ring in this milestone so check it out! 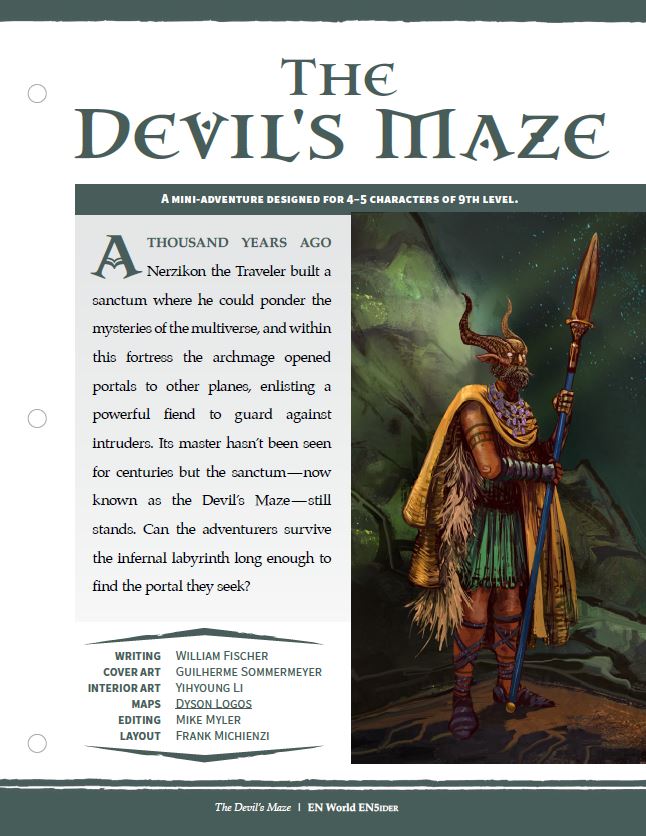 Free Articles including a complete adventure, a sidequest adventure, and the smart-fighting savant character class!
⚔ Join EN5ider for Immediate Archival Access: Pay as little as $1 each month to become a member and get instant access to the library of 350 articles at no extra charge!

Mike Myler is a freelancing RPG goblin (or goblin that freelances for RPGs?), regent, the editor for the excellent EN5ider Patreon, and the Project Manager for Level Up: Advanced Fifth Edition. You can also find his marks in the N.O.W. book for the What's Old Is New RPG and on www.mikemyler.com⁠ (which has the neatest collection of free content around as well as links to his 6 hardcover campaign settings). Definitely not up to anything sinister this year.
T

Cool....but you uploaded the cover JPG instead of the actual adventure

TheIdeaOfGood said:
Cool....but you uploaded the cover JPG instead of the actual adventure
Click to expand...


Oof! Thank you for the heads up—the PDF is up on the Patreon now.