Today marks a special occasion on EN5ider—our 400th article! We are thrilled to reach this milestone and thank all of our patrons for helping make it possible! 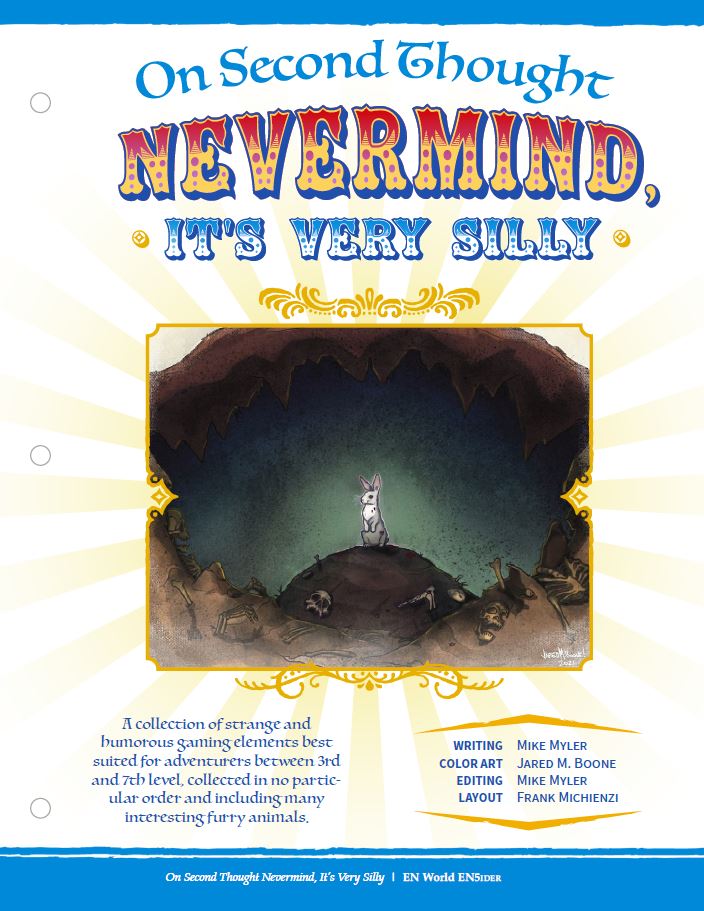 With that in mind to celebrate we are proud to present an extra-sized issue free for all patrons and non-patrons alike. Inside you’ll find a coterie of creatures: Denise the Anarcho-Syndicalist, a Commoner Swarm, a host of knights (including the Numbed Knight, Mantiknight, and even the feared Knights of the Dreaded Word), a Shrubber, the Vorpal Rabbit, the Twilight Monster, and the Enchanter...Tom? There’s also an Initialized Møøse—you know, my sister was bitten by a møøse once. Realli she was! It happened when she tried to karve her name onto the møøse using the broken talebone of a three-legged chikken gifted to her by our grandmother Hilda–

We apologize for the errors in the above credits. We the producers of this article would like it to be known that the person responsible for its crediting has been sacked.

There are compelling obstacles too like the Kingdom of Musical Numbers, Taunting Minstrels, Castle Salmonella, and Bridge of Doomed Queries. Of course you need to understand, the bite of a møøse is not to be underestimated…

Once again, we apologize for the errors in the credits. Those tasked with sacking the people who have just recently been sacked have been sacked.

The article also has memorable magic items (sack of sacking, riding coconuts, nearly lethal arrow of messaging, sacred hand grenade), and even a new spell: make into a newt! Please use it responsibly. Devotedly designed by Mike Myler, illustrated by Jared M. Boone.

Plus there are MORE free articles including a complete adventure, a sidequest adventure, and the smart-fighting savant character class! In addition, when you join EN5ider you get instant access to the library of 400 issues at no extra charge!

bedir than said:
Swarm of Commoners!
Click to expand...

Ancalagon said:
Well I will have to use the holy hand grenade at one point
Click to expand...

Thanks for the nice freebie!

Ace said:
Thanks for the nice freebie!
Click to expand...