Enemy Within Part One: Enemy in Shadows - A Review

The latest edition of Warhammer Fantasy RPG is built on a charming blend of old-school rules and modern sensibilities, and while Enemy in Shadows certainly does a wonderful job of capturing everything great about the setting, it sometimes feels held back by its devotion to a decades-old script. This is unfortunately a blemish on what is otherwise a really rather enjoyable little adventure. As the first volume of the titanic Enemy Within campaign, which will eventually run to five books, Enemy in Shadows is built to get players quickly invested in the blood-spattered Warhammer Fantasy world and it succeeds at this admirably. 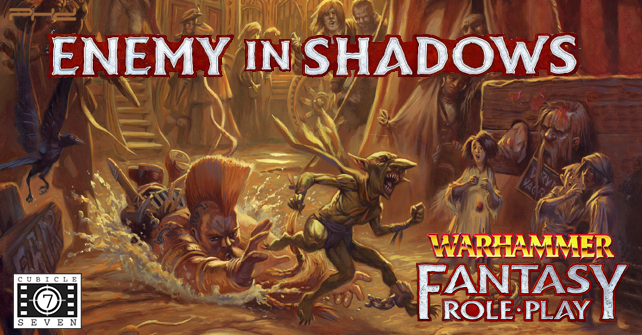 Within a matter of hours, the party can expect to have brawled with mutants, exchanged quips with a card-sharp and stumbled across a mysterious doppelganger that draws them into a series of bizarre and murderous events. It’s a whistle-stop tour of everything that makes the setting fun, and as they are drawn deeper into the weirdness that seems to accompany all adventuring parties the heroes finally find themselves at the heart of an evil arcane conspiracy.

Unfortunately, the important word in that last sentence seems to be “drawn,” as most of the adventure has them thoroughly left in the dark about what’s going on. Part of the reason for this, perhaps, is that like many of the adventures so far released for WFRPG 4E, much of Enemy in Shadows is pulled from an old first-edition module. This is a great little wave of nostalgia for returning players, but sometimes it leaves the adventure stuck awkwardly between what feels like two competing design philosophies.

On a minute-to-minute level it’s a wonderfully open, nicely structured series of short encounters with plenty of incidental challenges crafted to let the players tackle things in any way they see fit. In terms of broad strokes and story-beats, however, the campaign is incredibly linear. And this isn’t just the usual expectation that the party will move from encounter A to encounters B and C, either, but a requirement for them to take certain coaches, drink in certain pubs and spot certain NPCs in a crowd, lest the plot derail. Want to stay in the capital city and play around for a bit? Bad luck - some nobles you had a scripted encounter last night with were murdered off-screen, and now the watch is hunting you. Time to move on to the next town, but make sure you travel on this particular barge or things are going to get real screwed up.

There are plenty of tools tucked away in sidebars to help GMs when heroes push against the more linear parts of the story, or simply act on some faulty conclusions, but if the players are even slightly savvy they’re going to feel the heavy hand of narrative pushing them back to the main path. It really isn’t until they hit chapter eight (of nine) that the heroes are let off the narrative leash and allowed to start investigating things for themselves – and even then that’s only because a series of massive coincidences lead them right to the door of a secret chaos cult.

None of these are issues that a talented GM and willing players can’t smooth out, and if they do so Enemy in Shadows is going to be a blast. It takes the classic Warhammer blend of dumb, silly fun and ink-black grimness and smears it all over the pages. The desperate finale is a particularly thrilling way to spend an evening – in part because it lets the party tackle things in any way they please.

However, not everybody is going to be so deft with the smoke and mirrors needed to conceal the single-track plot, and not every table is going to be content playing along with it. For all the fun and excitement it holds, the campaign has real potential to be frustrating too. If you’re okay with letting the plot drift along you can still have great fun with Enemy in Shadows, but if the thought of spending a couple months bouncing along a railroad fills you with despair you may want to hold off until the Enemy Within campaign is a little more fleshed out.
Click to expand...

Any word on this release. I have it preordered at the game store

Not a very informative review. It would be nice to know how much it deviates from the two original adventures it packs together (Mistaken Identity and Shadows over Bogenhafen).

Being a "director's cut" one would like to know what has been changed.

Also, the review makes it seem that the whole thing is a little more than a collection of encounters loosely connected by GM fiat. This MIGHT be the case for Mistaken Identity - weren't it for its great plot hook, which is the premise of the whole campaign. Certainly this does not apply to Shadows, which is a delightful investigative scenario and not really linear.

True, its not sandboxy as the next instalment (Death on the Reik), but railroad? No way.

Does anyone have both editions? Is the original as railroady?

Andrea Rocci said:
Not a very informative review. It would be nice to know how much it deviates from the two original adventures it packs together (Mistaken Identity and Shadows over Bogenhafen).

Being a "director's cut" one would like to know what has been changed.

Also, the review makes it seem that the whole thing is a little more than a collection of encounters loosely connected by GM fiat. This MIGHT be the case for Mistaken Identity - weren't it for its great plot hook, which is the premise of the whole campaign. Certainly this does not apply to Shadows, which is a delightful investigative scenario and not really linear.

True, its not sandboxy as the next instalment (Death on the Reik), but railroad? No way.


I'm going to disagree here. I don't have any of the previous adventures, and actually I don't care about them. I joined WFRPG in 4e, and I want to know about this adventure by itself, not how it compares to old versions (that are pretty expensive to find on physical format...).

I ran the original adventures and we had a great time...I'm pleased they've re-tooled it for 4e and it looks like there will be extra bits to help make the adventures run a bit differently.
However, I would never play/run this again...it's a bit like playing Masks of Nyarlathotep again, surely players would remember all the main plot points...
Having said that the Enemy Within companion books look interesting...though you'd hope there isn't too much of the White Dwarf content re-hashed...like Rough Days and Hard Nights.

The reviewer is wilder over-exaggerating some things and down playing others. It is hardly drawn from an old adventure...the adventure in all essential details and characters is exactly the same, except for the rules of course.

The directors cut adds more explanation, and importantly alternatives to the plot and characters that the DM can change as they see fit.

While mistaken identity is railroady (it is in fact just a long plot book to introduce the Warhammer world and nothing to get in a tiz about). Bogenhafen is remarkably well detailed and open to multiple methods and solutions to the problems. The DM information even gives alternative villains to change the story of you need to react to players actions.

Definitely worth a look! Though if you have the original, don’t expect any surprises.

The plot is pretty much identical to the original. However there a numerous ‘grognard boxes’ sprinkled throughout the book that give alternatives to the original adventure. These are intended to allow GMs to mix things up for players who have completed it before, but are also just interesting options in their own right (and I’ve seen comments from some newer GMs that they’ve helped teach them how to adapt published adventures, which is a nice bonus).

Supporter
So Is it out yet ?

Stereofm said:
So Is it out yet ?
Click to expand...

The Final Installment of The Enemy Within is out!