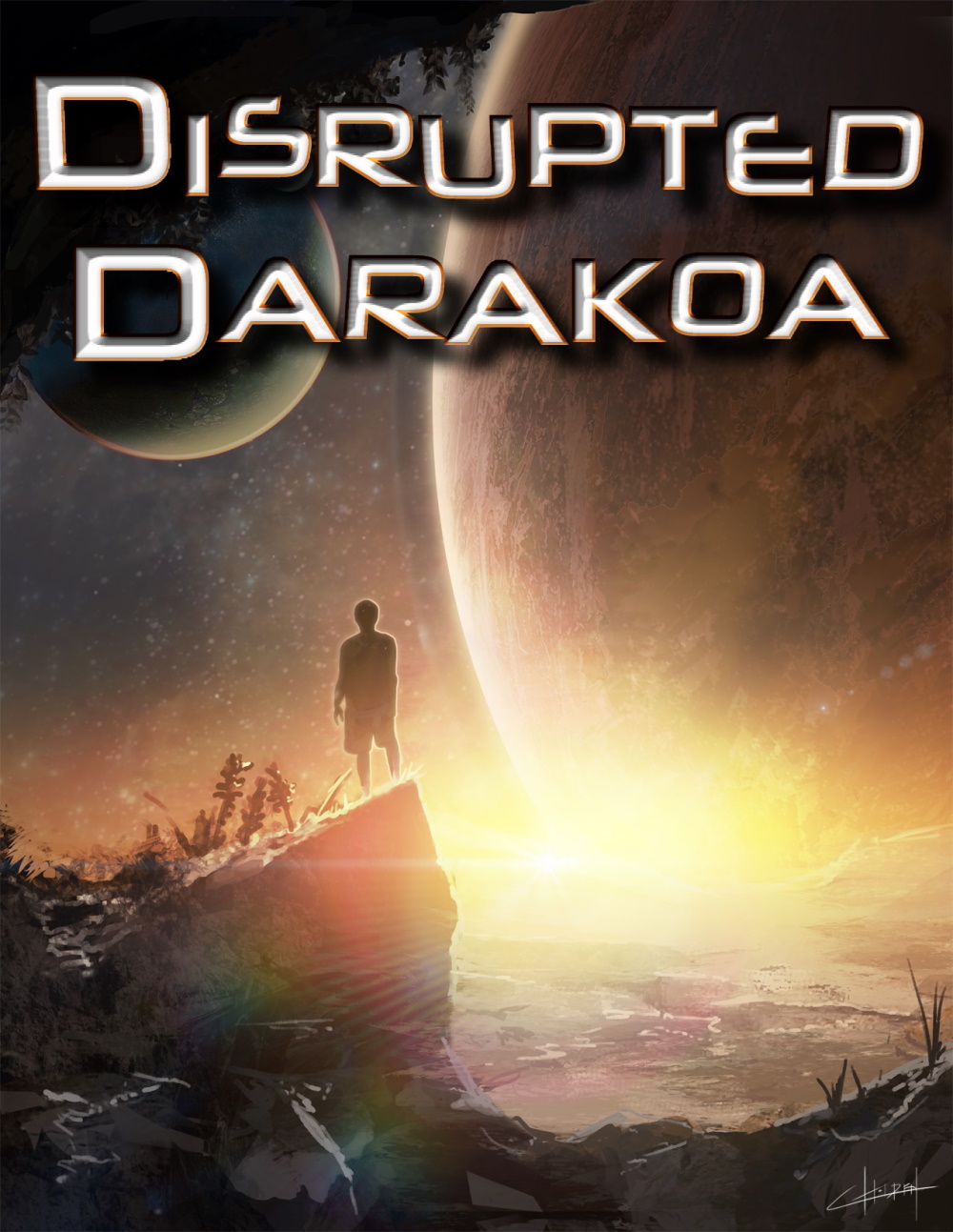 Unimaginable destruction of planetary scale is rare but occurs all the same, whether by way of ill fate, potent magic gone awry, or unbridled technology beyond the ken of its minders. Indeed the cosmos—itself ancient beyond mortal reckoning—is littered with planets that have suffered the ultimate fate. These cosmic graveyards are the realm of the desperate and them alone, and Darakoa is a perfect example of one such abandoned place. Shattered apart in a collision with another massive stellar body, its remnants tumble and float in a loose formation around the sun upon which it once thrived.

If this disrupted planet ever had any inhabitants there are virtually no traces remaining of them save for the cataclysm that brought an end to their world. Despite the apocalypse that tore this place apart it still offers something to those equipped for such a task, and though it has claimed the lives of most who try to salvage from it the tales of those that have found their fortunes rooting through its corpse keep the daring coming in a steady supply (adding to the riches one might take from it). What most of them discover is a deathtrap beyond their ken, and even those able to survive it must contend with monsters eager to make a meal of the treasure they’re seeking.

Planar Traits. A disrupted planet like Darakoa has the following planar traits and the Narrator should make use of the acid, darkness, extreme cold, extreme heat, high gravity, low gravity, magnetized ore, memory crystals, miring ground, and vacuum encounter elements. When it is possible to do so, noticing one of these encounter elements before it is too close to avoid requires a DC 17 Nature check.

Note. This dimension is not appropriate for tier 0 and tier 1 parties.

It is not always an accident that destroys a world and some stellar scavengers leave traps to dissuade anyone else from making good on their site, making it common for a disrupted planet to have countermeasures to keep out the curious. While within 15 miles of a valuable resource the party encounters a dateless defense every hour, rolling 1d8 and referring to Table: Dateless Defenses. When within 10 miles the Narrator rolls on the Dateless Defenses table once every 30 minutes, and within 5 miles once every 20 minutes.

The surfaces of Darakoa are unkind to say the least. When adventurers take journeys across this world, Narrators may choose to use the region tables in Trials & Treasures or the Disrupted Planet Exploring table. Any creature on Table: Disrupted Planet Exploring is a variant monster (an alien; see Table: Ingens Parasites for examples on how to alter its description) capable of survival in the void of space (able to survive without breathing and immune to cold damage), and at the Narrator’s discretion may also have a burrow or fly speed equal to its Speed.

For the most part travel upon a disrupted planet is fraught with constant danger from the lack of atmosphere leaving travelers exposed to the lethal vacuum of outer space. Relative safety might be found in precarious passages and caverns beneath the surface of Darakoa’s remnants, but so too are there areas stabilized by desperate magic rituals or life-preserving alien technologies. There’s breathable air in these protected pockets and perhaps even sparse, hardy vegetation—though nothing able to support life.

A disrupted planet has no natural sources of Supply, only caches left by the dead that have come before. Spells cast to find Supply automatically fail, but when a creature uses a feature or trait to find Supply it rolls 1d20, discovering a discarded cache with 13 (3d6+3) Supply on a result of 18–20.

The exposed interior of the planetoids constituting Darakoa make the typically demanding process of extraction a far easier endeavor. While on a journey across a disrupted planet adventurers are able to undertake the Survey journey activity to locate the remains and loot of dead salvagers, accessible veins of rare metals and gemstones, or a special element unique to that world (adamantine in the case of Darakoa).

Success on an Investigation, Nature, or Survival check tells an adventurer the location of something valuable.
Critical Failure. The party falls afoul of an already scavenged exploratory party or stripped vein prepared with several countermeasures. Roll twice on the Dateless Defenses table.
Failure. The party follows a few promising leads that turn out bust, wasting a total of 7 (3d4) hours of travel going out of their way to investigate. Roll 1d20 to see if the adventurers stumble across a discarded cache (see Protected Pockets).
Success. For each day spent doing this journey activity, the party finds a small vein with either 10 (4d4) pounds of gold, 2 (1d4) pounds of platinum, or 1 pound of adamantine (roll 1d6 to determine which: on a 1–3 gold, on a 4–5 platinum, on a 6 adamantine).
Critical Success. As a success, but the adventurers roll twice and use the highest result to determine the type of metal found, they discover twice as much, and fate leads the party to something unlikely. Roll on the Boons and Discoveries table (using the party’s tier; 5th–10th level tier 2, 11th–16th level tier 3, 17th–20th level tier 4).

Perhaps the greatest threat for salvagers combing across a disrupted planet is the one spoken of least of all—rivals without scruples or a murderous intent borne of desperation. These specialists or gangs of spacefarers usually have prepared for the unique demands of exploring Darakoa no matter how they arrived there (whether by portal or spaceship), wearing armaments to survive the harshness of outer space and equipped with a disposition that’s just as lethal.

At the end of each day an adventurer undertakes the Survey journey activity, roll 1d20 and add 1 for each previous Deadly Competition roll. On a result of 20 or higher, as they take a short or long rest the party is attacked by one or more humanoids with the Protective Suit trait that have an encounter CR of 1/3 the total character level (or on a result of 23 or higher an encounter CR of 1/2 the total character level).
Protective Suit. The creature is covered in an air-tight covering that grants it immunity to cold damage, and if it requires air or water to breathe a means for it to do so. When the creature is bloodied, each time it takes non-cold damage its covering ruptures, making it hold its breath to avoid suffocating and only granting resistance to cold damage. A rupture can be patched using an action and alchemist’s supplies, carpenter’s tools, leatherworker’s tools, mason’s tools, tinker’s tools, or any tool set the Narrator deems appropriate.

A phenomenon largely confined to disrupted planets, gravitic distortions are as effective at keeping people (and in particular the void-capable craft they use to traverse the stars) away from Darakoa as anything else. These roving distortions spawned from competing gravitic fields are capable of flinging a vessel or creature down into terra firma or away into outer space, suddenly turning rescue operations for those stranded there into death traps for everyone involved. While it is possible to travel through a gravitic distortion field what makes them so dangerous is that they can appear nearly spontaneously—giving no warning before suddenly the world turns upside down—and last for an indeterminable amount of time, their edges waxing and waning in fluctuations that can easily snatch things from the nearby void into their embrace.
Darakoan Distortions. At the end of every 3d8 hours the party is on Darakoa they encounter a gravitic distortion field. Alternatively, the Narrator may choose to have the PCs face this exploration challenge whenever rolling doubles on the Disrupted Planet Exploring table (11, 22, 33, and so on).

3rd tier (supernatural)
Challenge 13 (10,000 XP); DC 19/16
Area Immediate (less than 1 hour)
Chaotic patterns of dust swirl in the span ahead, drawn into the wake of rocks that float upwards in dizzying swirls or plunge back down onto the surface with destructive force. The landscape all around looks unusual, looking backwards confirms that the trail behind offers no more safety than the way forward.
Falling Sky. When gravity returns to normal in an area a creature entering into the area or anchored there makes a Dexterity saving throw, taking 70 (20d6) bludgeoning damage on a failed save, or half damage on a success. The area becomes difficult terrain.
Fluctuating Gravity. At the end of every 10 minutes the Narrator rolls 1d8 to determine the resulting gravity fields in the area: on a 1 normal gravity, on a 2–3 light gravity, on a 4–5 heavy gravity, on a 6–7 gravity reverses, or on an 8 nothing changes from its current state.
Fly Away. The use of fly or similar magic triggers a critical success for that adventurer.
Reversed Gravity. When gravity reverses, a creature or object not anchored to the ground falls upward for 100 (3d6 × 10) feet at the end of each of its turns, up to a maximum distance of 1,500 feet. A creature may make a Dexterity saving throw to prevent the fall by grabbing hold of something, or to grab a larger object for protection while falling. If a solid object (such as another planetoid) is encountered, the affected creatures and objects impact against it with the same force as a downward fall (a creature protected by a larger object takes half damage). When an object or creature reaches the top of the area, it remains suspended there until gravity returns to normal after 10 minutes, at which point all affected objects and creatures fall back down.
Spell Solve. The use of reverse gravity triggers a critical success for the party, and any spells that can predict or alter the weather grant advantage on checks and saving throws.

Possible Solutions
Anticipating the fluctuation of gravity in the area requires a Nature check, or a Perception check made with disadvantage (or normally if a spyglass is used). Athletics checks using climbing gear to travel through an area of reversed gravity gain a 1d6 expertise die, and Survival checks can be made to find subterranean areas to traverse (though the adventurers may still take damage from fluctuating gravity, it does not slow their travel).
Critical Failure. Being suddenly turned topsy-turvy by a patch of reversed gravity causes the party to lose 10 (3d6) Supply to the void or a cascade of falling terrain. Each adventurer makes a Dexterity saving throw or they impact something amidst the chaos.
Failure. The fluctuating gravities cause each member of the party to lose 2 (1d4) Supply and the party lose 2 (1d4) hours of travel time avoiding the worst of the cosmic mayhem.
Success. With a bit of luck and skill the adventurers avoid the worst of the gravitic disturbances, and while bounding across a swell of light gravity spot something useful that grants advantage on the next Survey journey activity undertaken by a member of the party.
Critical Success. As a success, and the party discovers something miraculous. Roll on the Boons and Discoveries table.
Click to expand...