The realm in today’s ENterplanetary DimENsions entry is all about suffering—the poor souls that find themselves here are in the most wretched of places enduring torturous trials, and it is only a fortunate few who escape the Woeful Wheel. 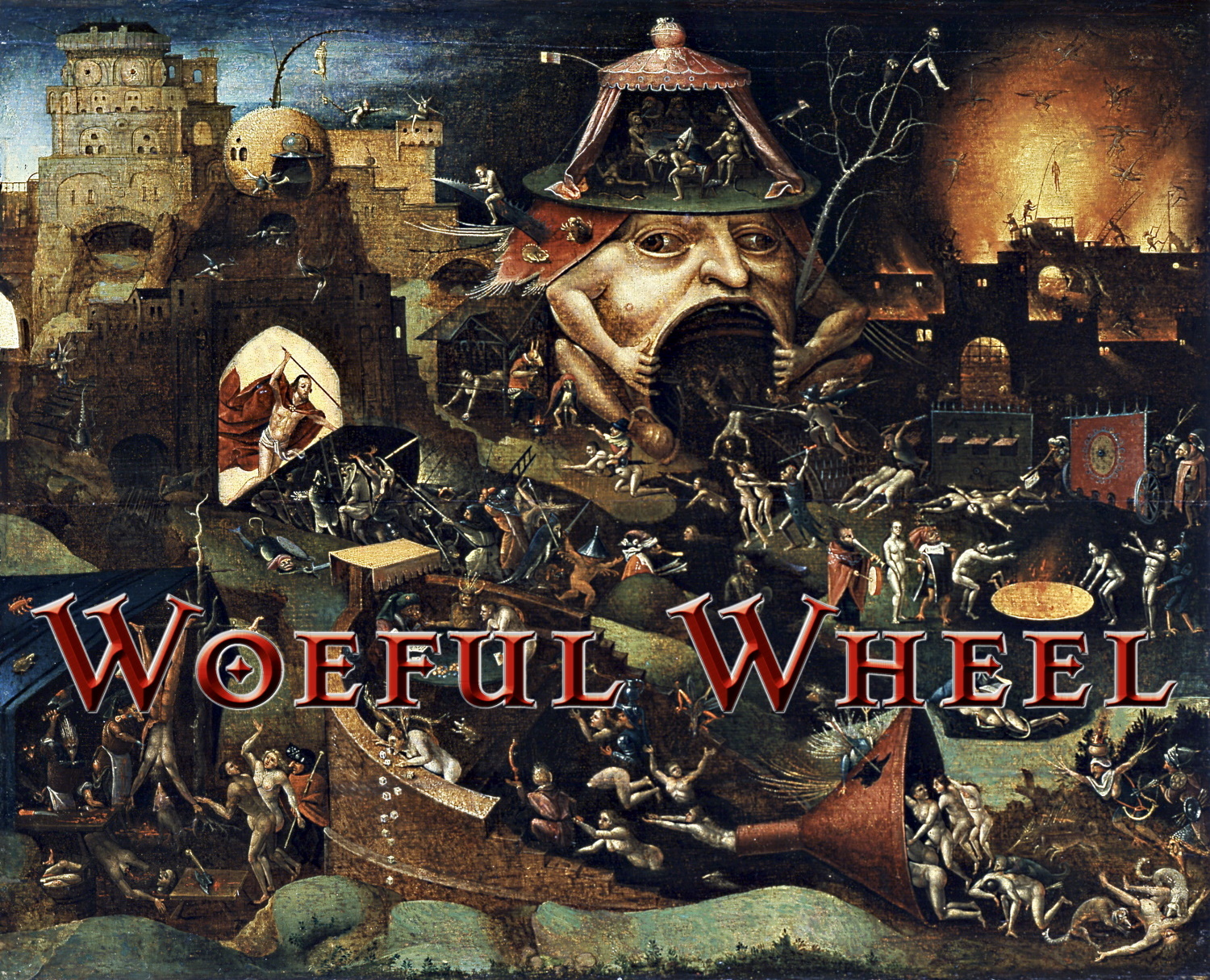 Everywhere in this dimension chaos and pain are yoked into form by the momentum of a long gone entity’s unbridled rage. None are sure how long Wheel has turned, if it will ever stop, or what might happen should that occur—but all know the name of Kevaxxa for it echoes still in the rare lull from the screams of those who have become trapped here. What is perhaps most wretched of all is that there is always presented the hope of escape, the slight chance of getting out of this hellish place goading the suffering souls within onward in an endless cycle of torment.

Although they are not native to Wheel, demons of all kinds find they are welcome here and not at all compelled to endure it. Instead these fiends delight in capering about the wretched realm, inflicting tortures and consuming the mortals that die in its merciless embrace. Everyone else has been sent here as punishment, happened upon the dimension by chance, or were otherwise fooled into coming to Wheel—and it is rare for any of them to escape to warn others of their fate.

Planar Traits. Wheel has the following planar traits and the Narrator should make use of the acid, crowd, dense smoke, extreme heat, fire, high gravity, miring ground, and strong winds encounter elements. When it is possible to do so, noticing one of these encounter elements before it is too close to avoid requires a DC 16 Religion check.

Note. This dimension is not appropriate for tier 0 parties.

When a non-fiend enters Wheel it always appears inside of the Gelatinous Gullet unless brought there by a wish spell, though sufficiently powerful entities (like epic adventurers or gods) can locate its exit on the Ethereal Plane and force their way inside from the opposite end. Attempts to leave Wheel without the use of the wish spell or by traveling through the Ethereal Escape automatically fail.
A creature that dies in Wheel permanently reduces its hit dice by 1d4 and its total hit points by the result × 2. If a creature has no hit dice left or its total hit points are reduced to 0, it dies and cannot be restored to life by any means.

Big Risk Big Reward. The first time an adventurer completes the cycle of Wheel and escapes they gain a level’s worth of experience. In addition, along the way they find a randomly determined magic item of a rarity defined by their tier (tier 1: uncommon, tier 2: rare, tier 3: very rare, tier 4: legendary).

Smart Solutions. Each spoke of Wheel offers PCs an edge or some alternative means for overcoming it, and Narrators should encourage adventurers to be creative when tackling these infernal obstacles.

The first place nearly every visitor to Wheel encounters is the nigh-endless gullet of the creature that slayed Kevaxxa, cursed to forever stay here consuming the weak. How far down the gullet a creature is when they enter Wheel is equal to 20 feet × its challenge rating or level. At the start of each of its turns a creature makes a Strength saving throw (DC 2 + 1 per previous successful save) or it is grappled by pustulating polyps, the grasping arms of those that have fallen already, or malevolent quasits that pull it 40 feet back into the gullet. On a success, a creature is instead slowed until the start of its next turn.

Aerobatics. A creature with a fly speed is able to make an Acrobatics check instead of a Strength saving throw, though on a failed check it is pulled 80 feet back into the gullet.

Rolling out of the maw of Wheel’s accursed behemoth is a metal tongue filled with row upon row of serrated spikes. This is where a creature exits the Gelatinous Gullet, and even though few still have an appetite to get out of it when they see where it goes there are fiends waiting to poke and prod them back from whence they came. To cross the Spiked Span a creature must first use an action to make a DC 13 Strength or Constitution saving throw, taking 13 (3d8) piercing damage and being pushed back into the Gelatinous Gullet where it is grappled until the start of its next turn on a failure. On a success the creature can move forward across the 50-foot bridge, making an Acrobatics check (DC 5 + 2 per previous successful check) for each 5 feet of movement or taking 7 (2d6) piercing damage.

After crossing the Spiked Span is a wall with three shuttered windows around which fiends aplenty watch. Behind each window waits a sadistically playful demon: two red and one green. When a creature crosses the bloodying bridge the monsters call out in voices known to it with a challenge: point to the window with the green demon behind it. As the creature makes its decision they implore it to point at one window or another with promises of salvation, accusations of deception, and personal insults as the horrible audience jeers.

Whichever window a creature chooses, roll 1d8 (granting a +1 bonus for every time it has overcome the Fiery Fortress). On a result of 8 or higher it chooses the correct window and is allowed to continue to the Crushing Channel, but on a lower result it chooses the wrong window and is rapidly deposited into the Fiery Fortress—whether by falling through a hole that suddenly appears in the floor, being flung there by telekinesis, plucked up by a gigantic abyssal claw and dropped, or briefly swallowed by a massive bouncing fiendish amphibian only to be vomited back out.

Special Senses. A herald’s Divine Sense allows them to detect which window has a green demon behind it by making a DC 13 Charisma saving throw to focus on the fiends behind the wall, and a ranger with fiends as a Studied Adversary gains an expertise die on the d8 roll. When another creature able to see behind the wall (or such a herald or ranger) uses the Help action to assist a creature with the Triple Trapdoors, roll the d8 twice and use the higher result.

Burrow Down. Any attempts to leap or fly over the Fiery Fortress result in being slapped back down by a massive fiendish hand that deals 9 (2d8) bludgeoning damage or an abyssal blast of fire that deals 9 (2d8) fire damage. A creature with a burrow speed is able to dig underneath however, and does not need to make Dexterity saving throws to avoid fire damage each turn.

Victims that have passed the Triple Trapdoors are prodded and poked by fiends into a massive funnel, hellhounds ravaging anyone that tries to escape the press of bodies. After making three successful Acrobatics or Athletics checks (DC 9 + 2 per previous successful check) a creature can force its way through the Crushing Channel. On a failed check a creature takes 7 (2d6) bludgeoning damage, and on a failure by 5 or more it suffers a level of fatigue. A creature that is already fatigued instead suffers a level of strife.

Coordinated Effort. Instead of an Acrobatics or Athletics check, an Intimidation or Persuasion check with disadvantage can convince other mortals being forced through the Crushing Channel to work together to push through.

On the other side of the Crushing Channel is a gambler’s table where a demon and debt taker sit waiting. To continue forward a creature must wager something; examples include its sense of wonder or pity, the memory of a loved one, fiery hatred for a nemesis, a longtime hope, childhood ambition, favorite flavor, ability to smile or frown, or an important secret.

A creature drawn to this area of Wheel is magically paralyzed by the realm’s telekinesis until it is strung upside down by its feet in front of a butchering demon (of a CR equal to ¼th its level, or if it has no levels then ½ its CR). The creature is strung up using thick leather (escape DC equal to the creature’s level or CR; AC 13, 20 hit points) and while strung up it is grappled and restrained. The butchering demon attempts to slay the creature in single combat, but if the fiend is defeated the creature is instead allowed to wander towards Ethereal Escape.

Bargain Escape. A demon about to engorge itself on violence inflicted against an already suffering mortal is difficult to stop, but if offered something of immense value it might be convinced otherwise. Everything a soul has offered up to the fiends of the Rigged Racket is likely not valuable enough to suffice—it’ll want the love one has for their child, parent, or spouse, the memories of their greatest triumph, or a life-changing secret to stop itself.

Reaching this area means finding the only route to leave Wheel, and a creature here is able to use its action to open the ancient wooden doors and move from here out into the Ethereal Plane. Once there it is drawn towards the realms material—though how it can fully return there after escaping this torturous place is another matter altogether.

Thoughts and Prayers. As long as a creature is conscious in this area, the dynamics of planar forces protect it from fiends and it is able to take a short rest. In addition, it can see other creatures throughout Wheel and pray for them with a DC 15 Religion check for each phase of the cycle. On a success, the creature further back in Wheel gains an expertise die on ability checks and saving throws to overcome that obstacle, or on a result of 20 or higher it instead gains advantage.
Click to expand...