Entromancy is a cyberpunk game using the 5E game engine that we have reviewed in a previous article. The creators reached out to let us know that there have been some supplements made for the game and did we want to take a look? Of course we said yes! Entromancy has been busy growing as a system and setting over the last few years. Today, we take a look at two modules expanding the game, Rise of the Redhats and Struct. Each module is different and offers more than just rules expansions. 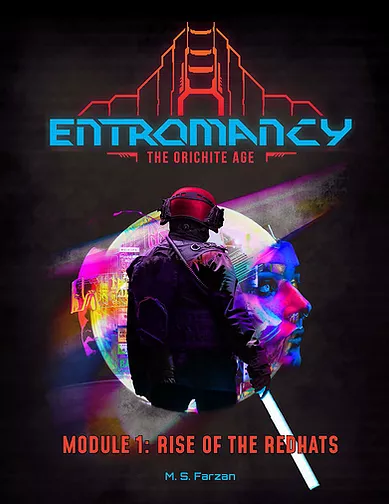 If I understand the chronology, much of what the modules talk about comes after the Nightpath Trilogy. This is a series of novels that take place within the fictional universe of Entromancy. In fact, the core book happens after the first book of the trilogy (also called Entromancy) and The Orchite Age occurs after books two and three. I have not read the novels, but I dig the idea that the creators are building this setting through different media. And as the universe expands in one medium, the creators are expanding it in others. Both Rise of the Redhats and Struct deal with play in the Orchite Age.


Module 1: Rise of the Redhats​

Redhats begins with an overview of what has come before. From the discovery of ceridium, a synthesized form of orichalcum, to the appearance of the underraces and the rise of the auric king Thog’run II. It then goes into the political events that transform the world of Entromancy, which include the rise of an Unaligned faction and the disappearance of Thog’run. All of this leads to a time travel narrative to a past where there were magical kingdoms fueled by orichalcum. In addition to the narrative perspective, the Troll is added to the list of playable races. These big folk can explicitly be used as cover and gain advantage through negotiation. For adversaries, there are two types of Firebrands and two types of dragons provided. I have to say I do like the short adversary entries Entromancy uses. 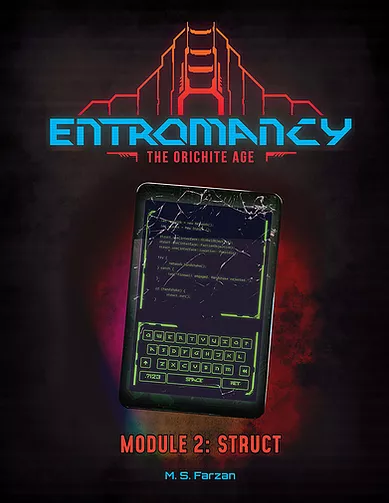 Struct is a different animal than Redhats. It provides a set of GM tools to create stories within the Entromancy universe. M.S. Farzan, the lead designer / creator of Entromancy, talks about the inspirations for the Struct system, most notably Ironsworn by Shawn Tomkin. In fact, many of the influences are given names in the front of the book. Struct, the system, offers the ability to run Entromancy missions with no-GM or GM light options. It takes into account Global and Faction objectives, as well as skill difficulty and NPCs.

Struct is not just meant to help get through a single session, but at least 20-25 different encounters. These do not all have to be combat encounters, of course. The module provides randomized charts to determine everything about the overall mission. At the end is an example of play that will be helpful for learning it. If you have played Ironsworn, then this will feel familiar to you.

What should also feel familiar is the background. Shadowrun is listed as one of the influential games, though Earthdawn, the at one time companion to Shadowrun, is not. But what Entromancy does with that inspiration is meld the science and magic into an unapologetic form that encoompasses a fair share of social awareness.

The art is minimal and mostly on point. The troll head in Redhats is scary and a bit odd. I do enjoy the aesthetics of the designs, which are heavy on the blues and reds. Both modules get to the point, which is great, but I think a little more meat on the bones for Struct would have been nice. A few adventure ideas on Redhats would have rounded out that book as well.

Overall, taken as a whole, I give Module 1: Rise of the Redhats and Module 2: Struct for the Entromancy RPG 4 ceridium bullets out of 5. If you are a fan of the game, I would say they are a definite value.
Click to expand...

Any word on if these modules will be compiled together for a physical release? I don't mind PDFs but if I can get a dead tree copy it's always my preference.

"Orchite" in my first language means "orchitis". Indeed, a game attuned with the zeitgeist