Today Epic Monsters has its sights set on an archon, a god, a demon—it depends on who you’re asking with Abraxas! 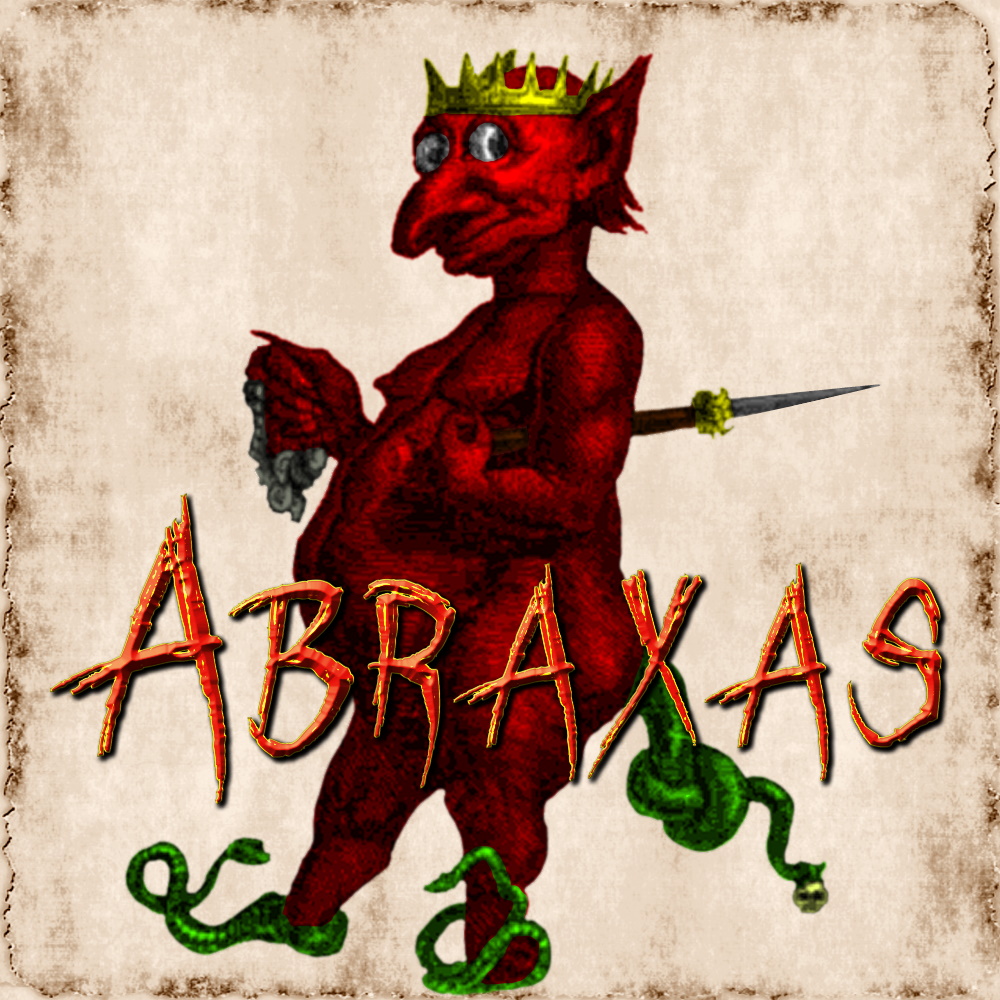 To begin with the word and name “Abraxas” (originally Abrasax) has gotten around. For this entry in the series we are primarily considering his Basilidean iteration as a demon (rather than other deific figures like an archon) and not the various Abraxas stones or the anguipedes they feature (a rooster-headed fellow among many serpent-legged creatures in Greco-Roman antiquity). His name is said to be a magical thing in itself—representative of the seven classic planets (the Moon, Mercury, Venus, the Sun, Mars, Jupiter, and Saturn) and mathematically equaling 365 by the rules of isopsephy—though his origins are scattered across the Mediterranean with various appearances in Egyptian, Hebrew, and Greek.

The legend goes that “the Unbegotten Father” created the various principles of humanity (intellect, speech, wisdom), causality, and angels that built 365 heavens all of which are ruled by Abraxas. Or maybe Abraxas was the progenitor, and the Basilidians thought the human body had 365 parts (and as many days in a year), and he sent Jesus unto the world (maybe as a “benevolent ghost”). Or Abraxas was the first of 365 Archons (below Sophia and Dynamis and the rest). Naturally the Catholic Church paints Abraxas as a demon and casts the Basilidians as “heretics of the second century”.

Design Notes: There’s not much definition to Abraxas other than that he’s about mental stuff, creation, and rulership. A psychic demon with some creation powers! Not sure what that crown’s about but it’s on his head so we’ll make it about foresight, and then give him some fiendish favorites like Devil’s Sight, a Fear Aura, and some standard high level monster traits (Legendary Resistance and Magic Weapons). Next let’s load Abraxas up with all the magic he might need for basic demonic trickery and the skills to support that, and a trait to represent his mighty intellect. After that let’s focus on the myth: the balor’s Fire Aura can become a cool psionic thing with a bit of tweaking, and then we’ll give him a trait to cover his poison attacks that will encourage the use of more psychic damage as a fight continues. Lastly we’ll drop some legendary actions in there (and a maze) to keep the most troublesome foes wrapped up and get more of that poison/psychic interplay going on. Let’s do the numbers! The DMG hit at 21.666 and the Blog of Holding at 19.166, averaging out to a comfortable CR 20.

Crown of Foresight. While wearing his crown, Abraxas has advantage on ability checks and he can use his bonus action to take the Dodge action.

Fear Aura. Any creature hostile to Abraxas that starts its turn within 30 feet of the fiend must make a DC 19 Wisdom saving throw, unless Abraxas is incapacitated. On a failed save, the creature is frightened until the start of its next turn. If a creature's saving throw is successful, the creature is immune to Abraxas’ Fear Aura for the next 24 hours.

Legendary Resistance (3/Day). When Abraxas fails a saving throw, he can choose to succeed instead.

Sapping Poison. A creature that has taken 20 or more poison damage from Abraxas becomes vulnerable to psychic damage until the poison damage is healed.

Weaken Body and Mind. Abraxas attacks once with his serpent feet and once with his mindblast. These attacks cannot have the same target.

Psionic Overload (Costs 2 Actions). Abraxas chooses one creature he can see within 60 feet. The creature must make a DC 19 Charisma saving throw or be stunned until the end of its next turn. If a creature’s saving throw is successful, it has advantage on saving throws against this legendary action for the next 24 hours.

Cool, a demon who toys with your mind/soul rather than just your body

Considering his ambiguity, I think maybe going against expectations and declaring him true neutral rather than neutral evil might be the way to go.

So if he's neutral evil...he's a yugoloth? I actually liked how they were called Daemons in 1e...oh well.

Casimir Liber said:
So if he's neutral evil...he's a yugoloth? I actually liked how they were called Daemons in 1e...oh well.
Click to expand...

There are other Neutral Evil Fiends than Yugoloths, actually, for example the Gehreleths. He seems to be an oddball, something fairly unique, or maybe the remnant of a previous generation of fiends, like the ancient Baatorians are to the Baatezus, or the primal demons (can't remember their names) to the Tanar'ris.

And yes, I prefer Daemons, Demodands, Devils, Demons respectively, but then I'm at a lost for the Baatorians.

Very nicely done, Mike, thank you! I especially like the nous aura and, in particular, your naming of it. It is nice to see a Mediterranean mythological creature that has a feature named drawing from the history of nous. You may already know this, but if not, the adjectival form of it is 'noetic,' should you ever need to use that.

Nice design! I especially like how the poison makes people more vulnerable to psychic damage as the battle goes on. Complementary mechanics like this always seem to create more interesting encounters.